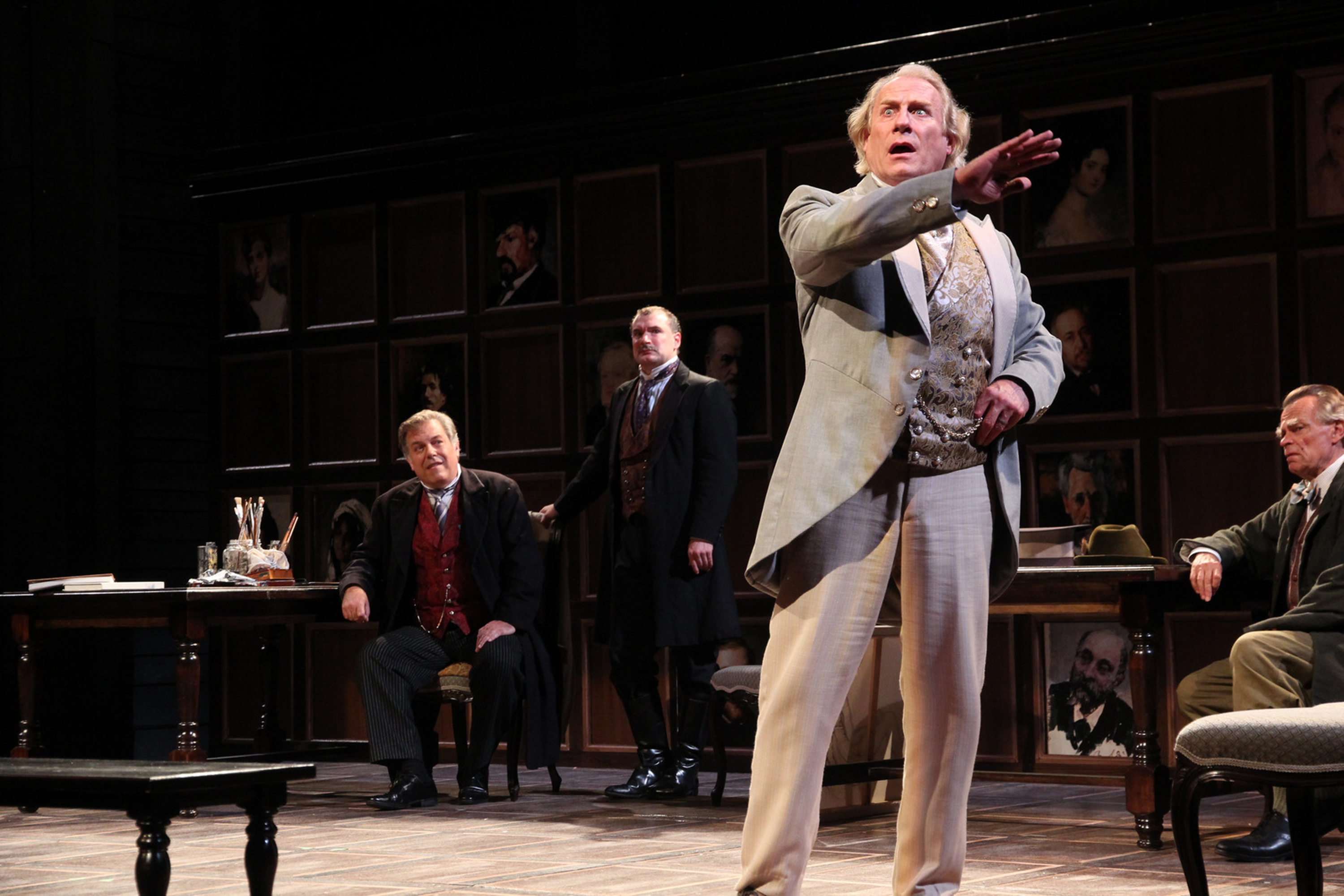 SPRING GREEN — American Players Theatre’s Saturday production of The Doctors Dilemma saw playwright George Bernard Shaw let favorite archetypes tumble into a philosophical pecking order, where artists shone brighter than those with the means “to sometimes cure and sometimes kill.” Morally challenged MDs end up on the bottom with the bedpan.

They know “pain doesn’t come until after, when they get bill.” Merely the least buffoonish of the medicine men dabbles with “the doctor’s dilemma” — whether “to kill someone, so that another might live.” Shaw renders truth timelessly stark, wherein “40 out of 50 people are condemned to death.” So what does a doctor do to save the other 10?

Further, is an “artistic genius” worth saving over one of those lives? 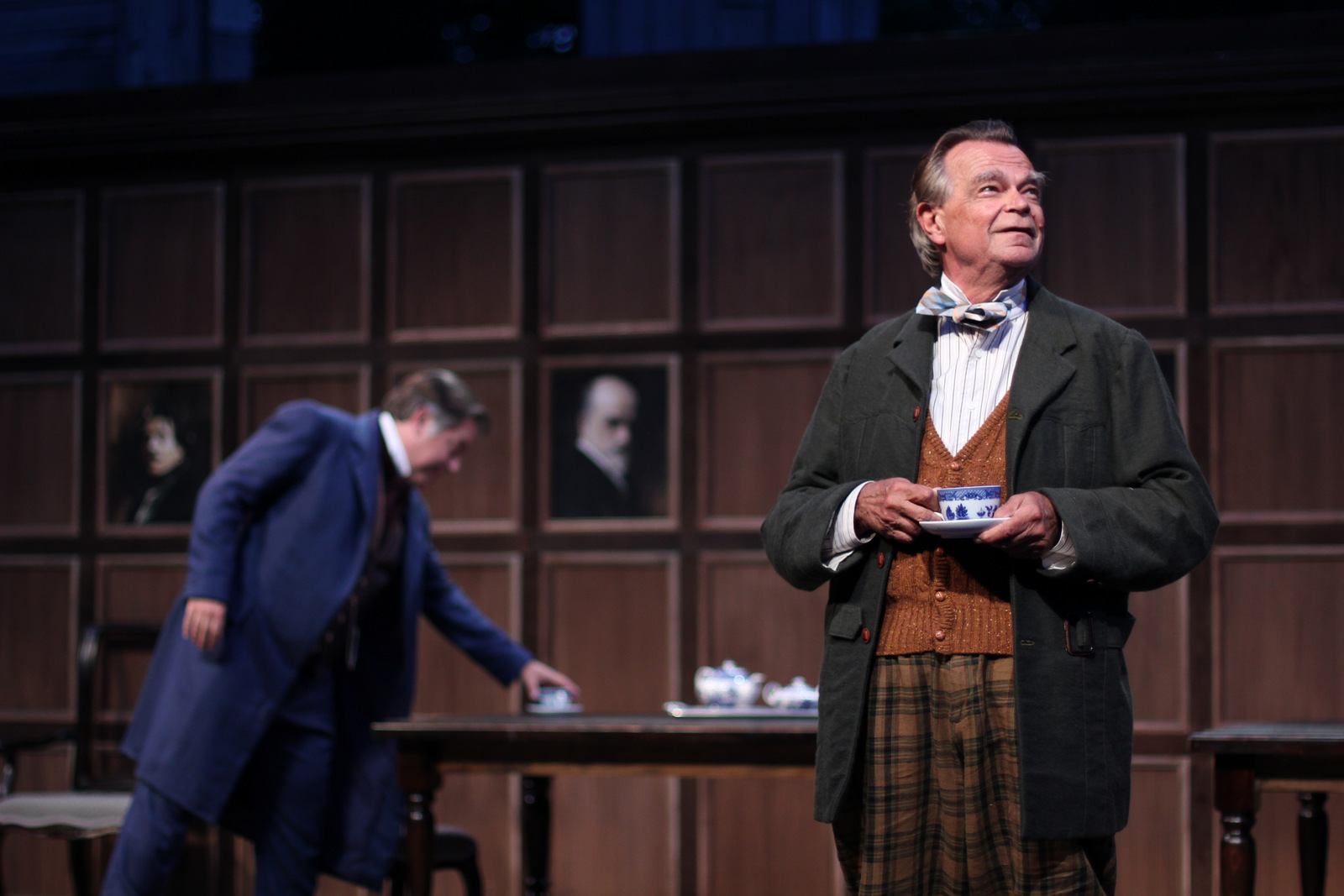 Among the other doctors adding to the chaotic fun are craggy Paul Bentzen, longtime APT comic foil, who’s retiring his lean-boned jocularity this year, and especially a foppish, blonde-mopped doctor named Sir Ralph Bloomfield Bonnington. “So many of my patients are better dead (than useful),” Bonnington shrugs. “My tastes are simple.”

He’s not the only one who conveys wit by letting his overactive mouth expose himself. It’s one of Shaw’s most winning ways but, in this play, might also have amounted to a bit of self-mockery, intended or not.

You can’t help liking Shaw’s moniker mongering. There’s also Dr. Blenkinsop (David Daniel), who provides some of the playwright’s most barbed social satire, as a physician too poor to afford his own treatment. Or Minnie Tinwell, a maid, who’s caught up in the unseemly steaminess. 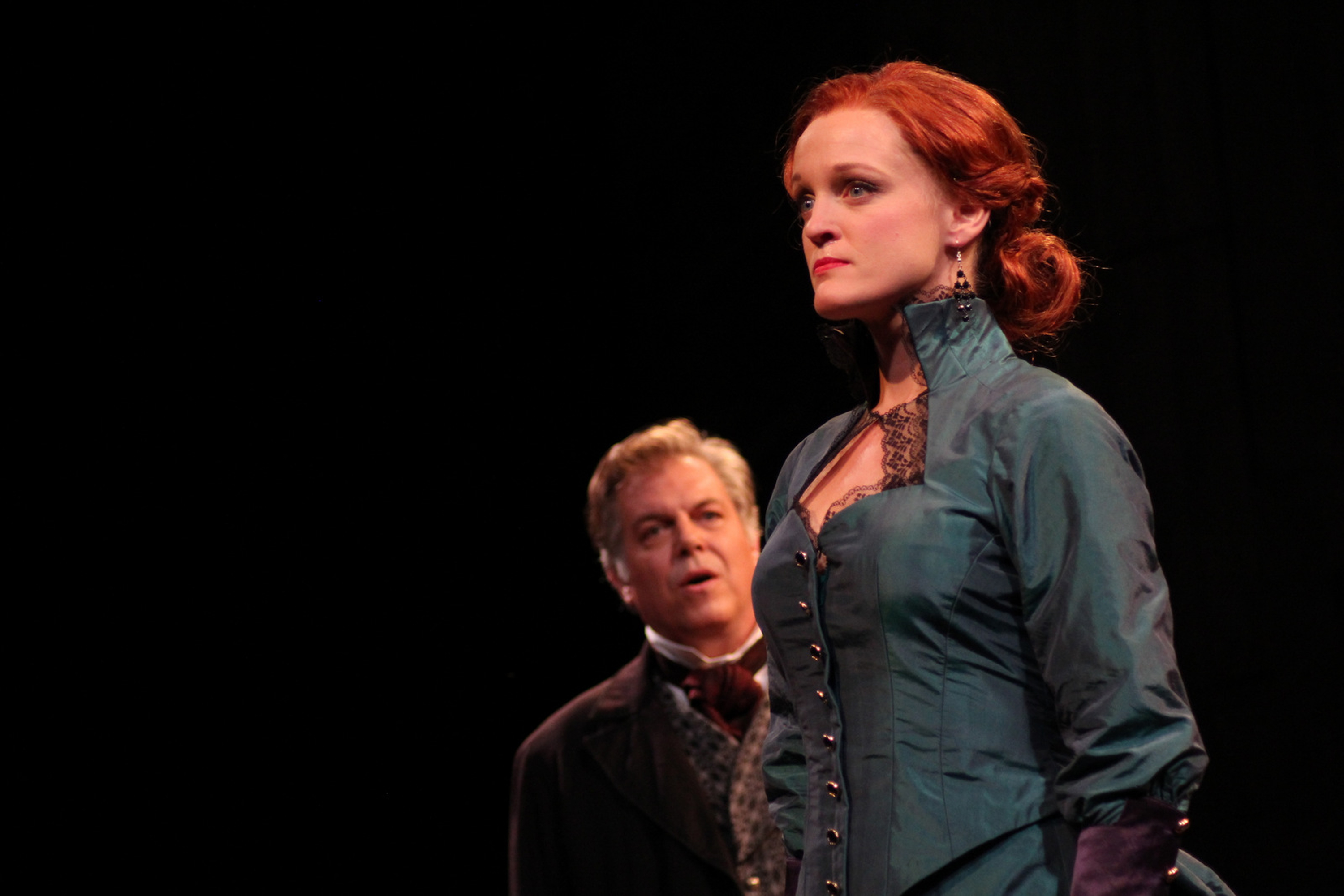 Sir Colenso Ridgeon (Brian Mani) has eyes for Mrs. Jennifer Dubedat (Abbey Siegworth), the wife of one of his patients.

Despite Ridgeon’s amorous advances, Mrs. Dubedat is dedicated to her wispy, mortally-sick husband, whose corporeal remains seem 98% inspiration and 2% perspiration. What’s left of Dubedat (Samuel Taylor) seems hanging from a tube of paint.

However, ailing Dubedat, an “above it all” artist, is also a master money-grubber and a bigamist. Shaw finally frames things in existentially human terms.

However, the playwright couldn’t stop writing. Judging fate interceded where an editor didn’t — an audience member actually keeled over and a medical emergency stopped the play for nearly half an hour.

That merely slowed Shaw’s brilliant discourse, which should’ve ended with Dubedat’s death, an exquisite set piece by the company, a virtual Pieta on stage, pure spiritual pathos. “I think I’ll recover after all,” the artist murmurs. “I suddenly went to sleep.” 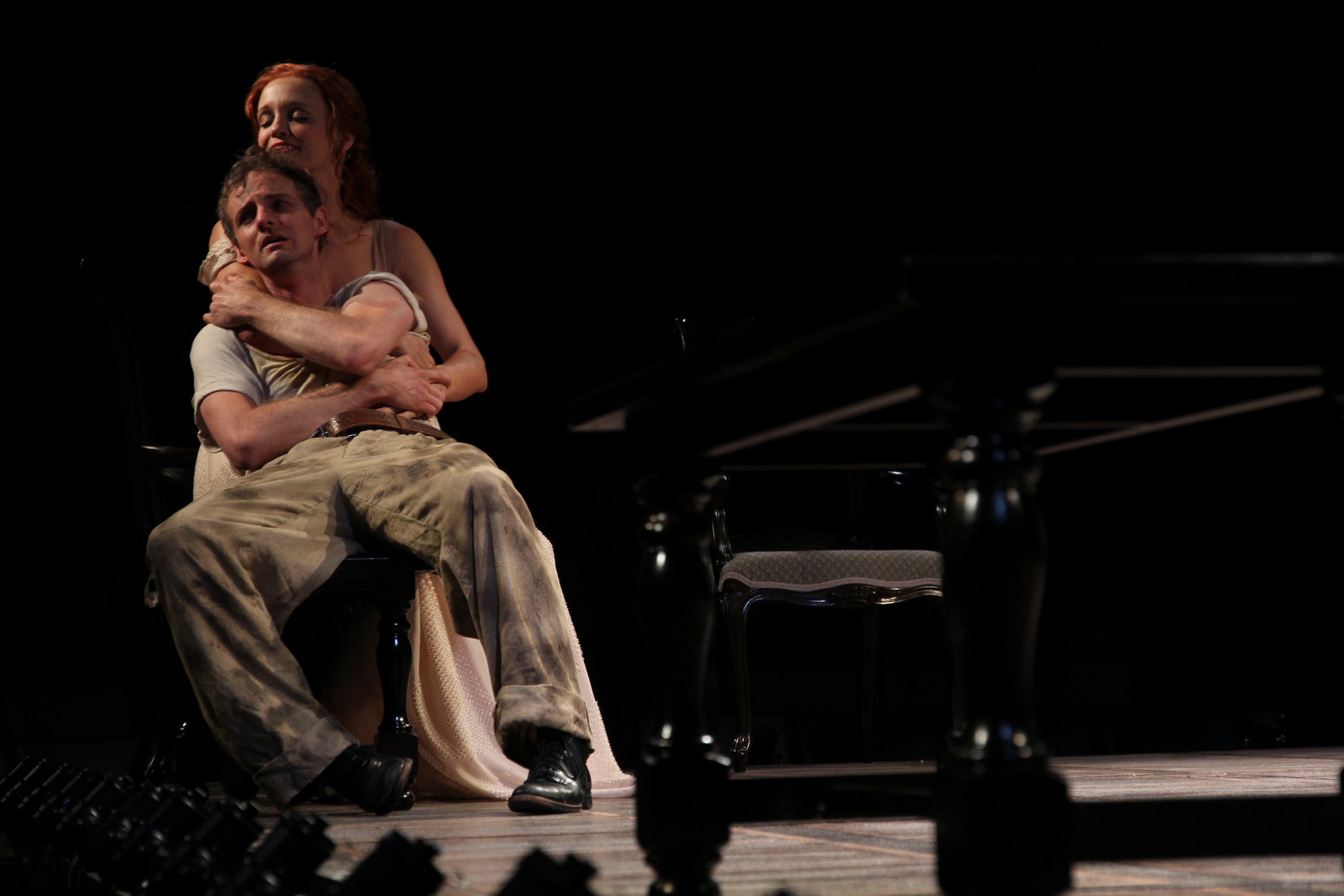 That said, this superbly crafted production includes another stunning set piece, actually 48 of them – backstage panels of portrait paintings, ostensibly by Dubedat, of celebrated 19th century medical and cultural icons. These presences frame the dilemmas and shenanigans like so many witnesses to humanity’s folly, grace and endurance. 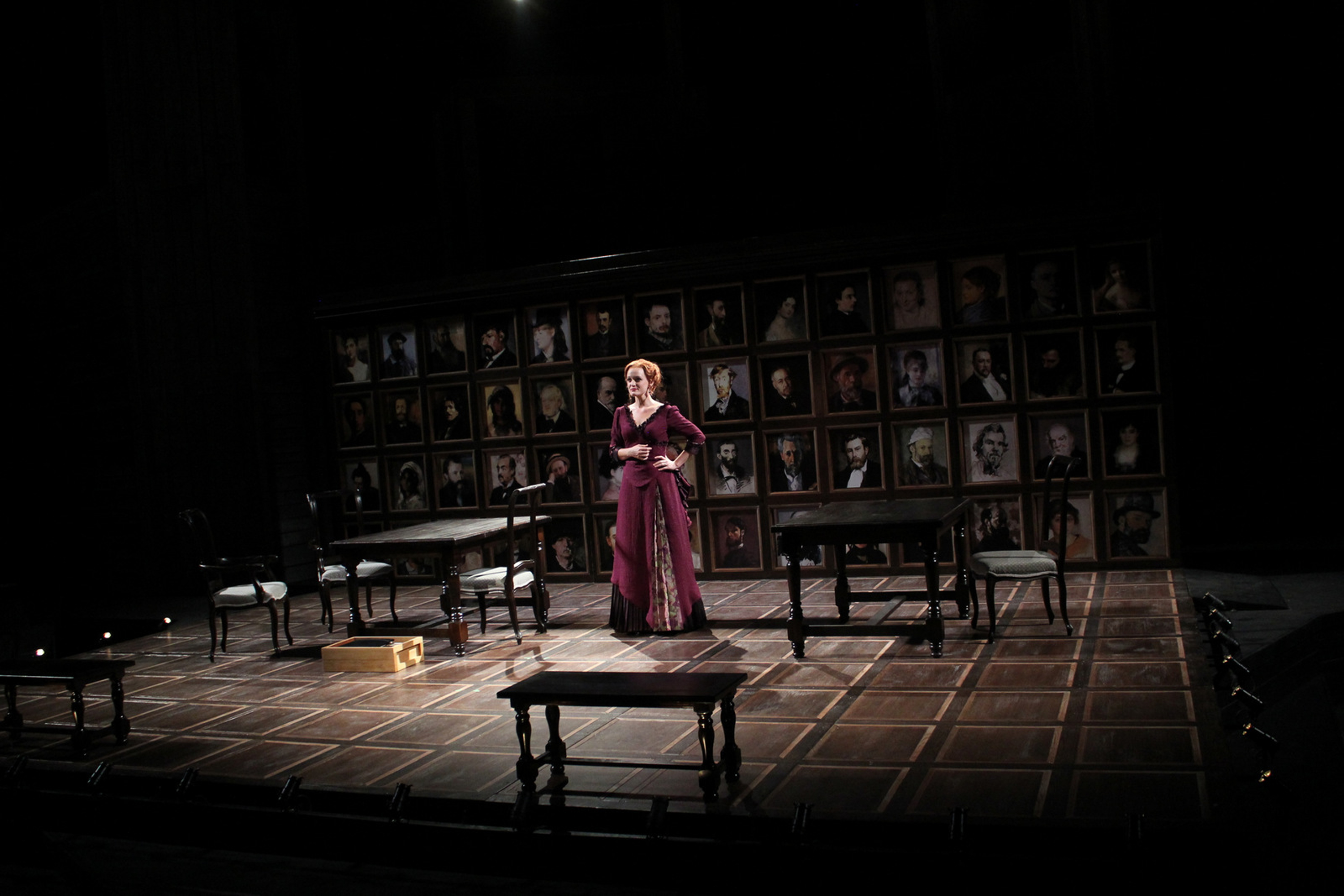 All photos by Carissa Dixon and copyright of American Players Theatre.