Summer travels have delayed me from commenting on a very important cultural event, the First International Jazz Day, held on April 30 in the General Assembly of the UN in New York City. Despite the event’s extraordinary demonstration of the creative and pan-cultural range that the language of jazz possesses today, this first-of-a-kind event was undercovered by the mainstream press. Even Down Beat caught up with the event in its July issue. One man on the actual beat was Howard Mandel, perhaps the dean of my generation of baby boomer jazz critics.

I’ll refer Culture Currents readers to Mandel’s blog page (below), Jazz Beyond Jazz, with its direct link to his vivid, in-the-pocket review of the huge event with a mind-tripping the lineup of artists. 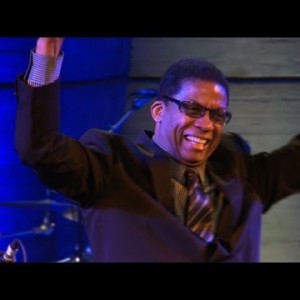 Herbie Hancock, who has become the Louis Armstrong of his generation as a jazz ambassador to the world, was responsible for pulling this together as an actual event, attracting artists from many nations and musical vernaculars, and orchestrating  a true phenomenon: The simulcast event actually reached 195 nations and improbably had musicians in locations around the world playing together Hancock’s famous jazz boogaloo “Watermelon Man” in tandem with his performance of it at a sunrise concert In Congo Square, New Orleans. What a trip that moment must’ve been.

To repeat: a famous jazz theme played together throughout the world at sunrise at Congo Square, New Orleans. Wrap your head around that — because it resonates like music of the spheres, music of our sphere, I should say. And the symbolism of the italicized phrase is how this all reverberates.

Internationally telecast or film distributed concert films my reach global audiences. But how often do so many musicians around the world played together — as one?

Is there any performance event comparable in this sense? What does it say about how we (the global we) communicate, or fail to? How could any communicative medium transcend the myriad of political, cultural and linguistic barriers that have always stymied other discourse from accomplishing something comparable. Perhaps I can imagine the art of dance doing it, free as it is, in essence, from linguistics. But dance has never attained a common language that has grown as universally as jazz as a global tree-like phenomena, defined by its increasingly diverse sonic vocabulary.

And this development, from its American genesis, has led to instances where the influences that shaped and constantly reshaped it, incorporating elements of many traditions — African, European, Afro-Cuban, Brazilian and Spanish just to name a few.

So there is something truly global about the music we call jazz, because it doesn’t depend on a spoken language. Quiet as it’s kept, it long ago became a universal musical language while remaining the quintessentially American music — in its democratic ways of doing things. That’s a great part of its attraction and it’s profundity, at its best.

It is simultaneously the art of musical motion in the moment, as in improvised swing and the myriad ways that jazz musicians redefine,  personalize, exoticize and essentialize    that ineffable yet always palpable thing called swing. I sure ain’t trying to define swing  in words. We can all just circle around it, feed off of its power, like a living, breathing body pulse that dances in the air among us. You just know when you hear it and feel it.

More on that, when I do a survey of Milwaukee’s impressive new generation of jazz musicians.

But for now, let’s hope that this International Jazz Day — which dignitaries from the UN eloquently celebrated — is an annual event and that it helps the world to understand what playing and working together creatively can mean.

I’ve written a whole book on that subject, titled Voices in the River: The Jazz Message to Democracy, which I hope to publish soon. So I won’t belabor the issue further now.

Do youself a favor. Go out an find some live jazz and hear and feel what the global we is talking about. What all those great musicians were talkin’ about: “Heyyyyy, watermel-on man! (Watermelon, watermelon!)”.