Defiance, MO — The sun glinted off of the sporty new Ford Focus I had rented, as it buzzed me toward the sumptuously rolling rural hills and dales I had recalled on my first ever trip through Missouri decades ago.

The outlying splendor proved a tad too intoxicating as I missed my exit for Defiance,  and when I started seeing signs for Kansas City I got off the next exit and, at a convenience store, found some friendly “show me” Missourians. The ladies helped show me what appeared to be the right two-lane highway path, “a shortcut” they assured me.  I began a long meander through precarious wooded semi-loops and runaway-truck death plunges, feeling semi-lost but following the way to an alleged signpost up ahead, to Defiance, or perhaps the Twilight Zone. Yet the town’s name, perhaps born of the Civil War, helped steel my determination to find this increasingly mythical musical destination.

The Chandler Hill Vineyard, somewhere outside of tiny Defiance, was presenting the folk-rock duo Rogers & Neinhaus, performing until  4 p.m. Somehow the Focus guided me there (No GPS, just well-Focused horse sense I reckon, perhaps inherited from the car’s ancestor, The Mustang?) I got there in time for the duo’s last set, which was fine by me, as it turned out. The duo’s website convinced me of their musical accomplishment.* I didn’t quite expect an unforgettably transporting setting .

Fifty miles out in the middle of nowhere (though the town’s residents may defy the  stereotype), the place was packed with wine and food sampling music fans. The vineyard’s proprietors have built a large chalet poised atop a hillside that overlooks magnificently undulating crests and valleys stretching far into the distance. I sat down at a table with a tall African-American man seemingly in his late ‘40’s. 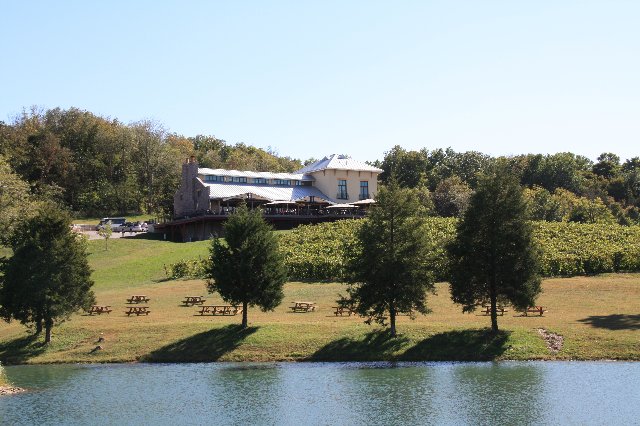 The duo is St. Louis-based but has strong credentials, including having toured as members of a post-Roger McGuinn version of The Byrds, then led by the legendary folk rock group’s drummer Mike Clarke. Their plausibility in that role became quickly evident in their overall musicality and their vocal harmonies, as convincing purveyors of classic California folk rock, as well as their own originals.

Scott Neinhaus especially looks like a throwback. His beard and wind-dancing strawberry-blond locks give him the look of David Crosby, after a crash diet. Shorter-cropped Terry Jones Rogers is a slightly beefier visage of Graham Nash, not to push the comparison too far.

One of the songs Neinhaus chose for his solo segment was Crosby’s ethereal evocation “Guinevere.” The song from the first Crosby, Stills & Nash album remains magical. I asked my table companion if he was aware that Miles Davis had recorded a 20-minute instrumental version of this and he nodded yes knowingly.  So a small cultural journey for one song had come full circle and I happily revisited it. Neinhaus explained that Crosby wrote “Guinevere” in such a strange tuning that it requires a guitar that he carries solely to perform this song. The ode to a mysterious female enchanter dwells in such intimate psychic wonder that some of it was swallowed up in the amiable murmur of the sun-soaked crowd in cabaret tables. But you can imagine why the song’s gently drifting, slightly bitonal corridors of memory appealed to Miles Davis and his voracious, defiantly romantic nature. Yes, this song fit this spot perfectly.

Considering the relaxed unconcert-like setting and audience, the duo’s reliance on covers over originals was understandable.  But their choices were satisfied and not completely predictable.

They did Jackson Browne’s “The Loadout/Stay,” the opening section describing the stresses and joys of a band and road crew on tour, then segues into a cover of Maurice Williams’ infectiously swaying R&B song “Stay.” The whole piece amounts to a dual imploring – the audience to stay and to tribute the whole crew’s dedication and perseverance, and to convey a sense of the hardship and the challenges of a seemingly glamorous existence.

Then Neinhaus pulled out a harmonica rack for the only song he does on the instrument, Neil Young’s “Heart of Gold.” Though an always satisfying song, it seemed the only one slightly pandering for being a bit out of the duo’s comfort range.

The set ended firmly in the pair’s wheelhouse: two vintage Byrd songs. “Turn! Turn! Turn! (To Everything There Is a Season)” is adapted entirely from the Book of Ecclesiastes (with the exception of the last line) and put to music by Pete Seeger in 1959. The Byrds’ version of the song easily holds the record for the number one Billboard hit with the oldest lyrics.

With an almost biblical timelessness, “Turn” still gyrates to the gentle waves of grace born of a song crafted from a passage that bespeaks ideals regarding how life unfolds in seasons for a purpose, including a time for peace, “I swear it’s not too late,” a declamation strong enough to still stir a decaying or newfound dovish instinct in some listeners. The song also worked thanks to the duo’s superbly enfolding vocal harmonies, with perhaps an assist from some contemporary sound-processing effects.

The set’s climax came with a stunning assist from Missouri’s natural majesties. 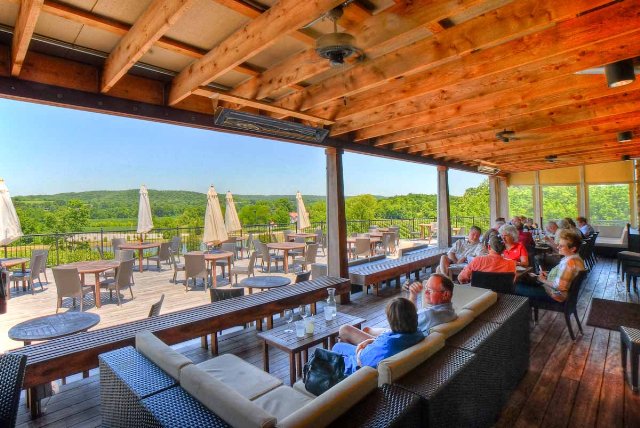 Perhaps it had to be “Eight Miles High” from this vista. Rogers & Neinhaus built the song through its increasingly transcendent crests of expansive sensory experience; yet before we could “touch down” something extraordinary happened. The song is famous for Roger McGuinn’s John Coltrane-influenced guitar solo, a space/time barrier-breaking surge of tight, odd intervals, dominated by seconds and fourths, which jettison diatonic melody for abstract flight. Neinhaus chose a bluesier, somewhat more grounded approach to his solo but the song’s spiritual effect was not to be denied.

About a minute into his ascending solo, something emerged from the verdant hills stretching beyond, behind the bandstand. It was four eagles — unmistakable with their astonishing wingspans — rising, hovering, circling, cresting. One of them broke the loose formation and drifted toward our balcony as the guitarist reached his climax. The great bird tailed off at the last moment, but by then one could readily imagine boarding his mighty wings and traveling, how many miles high?

The duo was unaware of the aerial choreography behind them until I informed them afterward, and Neinhaus, sweat dripping from his beard, shook his head in gratified wonder.

This version of the classic flight trip song wasn’t quite as far out musically as the original but it didn’t need to be, on this easy-going afternoon. The duo worked hard, and at times brilliantly, to help take us where we needed to go. The eagles lifted us to the final mile, and perhaps a little beyond.

“There is a wisdom that is woe; but there is a woe that is madness. And there is a Catskill eagle in some souls that can alike dive down into the blackest gorges, and soar out of them again and become invisible in the sunny spaces. And even if he forever flies within the gorge, that gorge is in the mountains; so that even in his lowest swoop the mountain eagle is still higher than other birds upon the plain, even though they soar.” — Herman Melville, Chapter 96 “The Try-Works,” Moby-Dick or, The Whale.