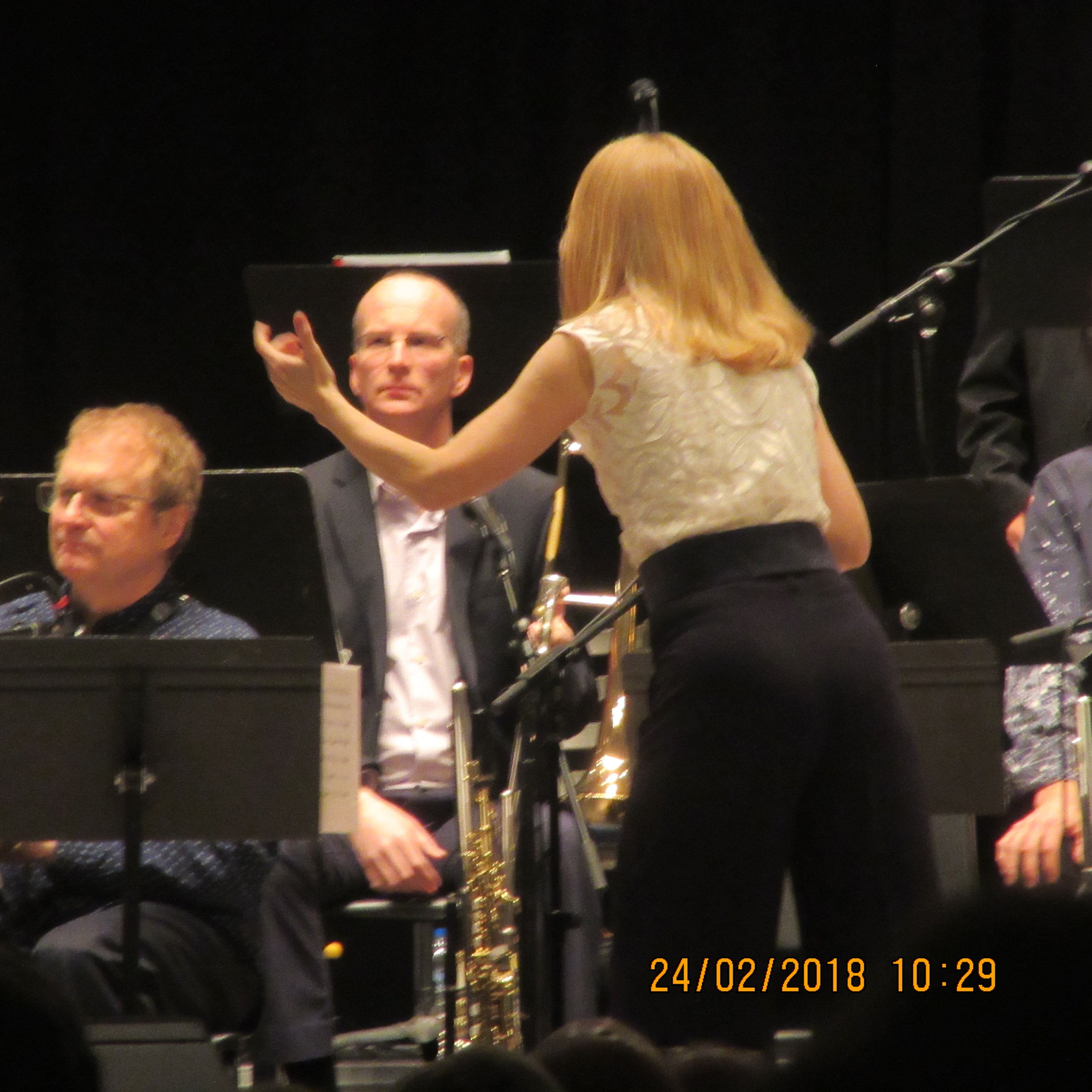 Orchestra leader Maria Schneider demonstrates the nuance in her conducting technique which employs arms, hands and body English, but no baton. All photos by Kevin Lynch

ELMHURST, IL – Something ominous trails through the wind. Most everyone attuned to electronic media can feel it by now, if not wholly understand. It hovers at a crossroads in a busy city street, but for Maria Schneider it may feel like intrusion on a desolate but beautiful country road in Minnesota, not far from her hometown.

Same difference in the larger scheme, this is a state of mind and maybe of spirit. But after this concert, one senses Schneider’s crossroads stands near humanity’s choice between Robert Frost’s road less traveled and the one we seem headed on directly, into the mysteries and maelstrom of technology.

The technology engulfs us psychically among many other ways. And this woman, who has reached an artistic pinnacle using a traditional communicative technology – composing and arranging for her jazz orchestra – feels the dichotomy intensely. Now she’s shared her angst with her public.

In a way, the occasion allows us to see anew the choice – which way to travel. Schneider showed at this live concert Saturday that she remains the mistress of hill and dale, of The Thompson Fields near where she grew up.

She’s a conjurer of atmospheres as thick as pea soup and as palpable as the mist that swept steadily across the nocturnal landscape on this climactic evening of the 51st Elmhurst College Jazz Festival.

The pivotal work of the evening, she explained, is a recent and yet unrecorded commission. She calls the composition “Data Lords,” an oddly evocative title that brings to mind alien presences, perhaps like those in the Star Wars saga. Schneider has chosen to grapple with the huge technology media giants like Google, she says, which have transformed the way we live and communicate. The title references directly the exponential rise of artificial technology which may, before long, grow so powerful as to become more intelligent than humans. She’s taken considerable control with the independent record label ArtistShare. But she’s hardly alone in fearing, but for what exactly? We can’t know for sure right now.

I’d venture that the somewhat politically conservative “big band” genre is undergoing changes, certainly forged and liberated by Sun Ra among a few others. But more recently this impressionistic field-leaper may feel the dark, restless cloud of Darcy James Argue’s Secret Society, a jazz orchestra which, from its name on up, seems born for the age of Trump, with persuasively dark social themes that thunder across apocalyptic aural landscapes. This year Argue even overtook Schneider in the Down Beat Jazz Critics Poll for best jazz orchestra.

The times do seem to call for music that proves or inspires intense, extended contemplation and discussion, and Schneider’s Data Lords provides an appropriate couching for such concerns, and is hardly built for easy comfort.

We know her as a sonic magician in the tradition of Gil Evans and Duke Ellington and here she lets loose some reins because her control is always measured by a desire to allow her creative musicians to fly enough free, like those she evokes in celebrated pieces like “The Monarch and the Milkweed.” Her artistic reach can encompass much of nature and humanity.

One might even imagine her with a hopeful fancy. In announcing her exquisite piece “Home,” from her 2017 Grammy Award-winning album The Thompson Fields, she sounded like she’d uttered “Hope.” The tender concerto for tenor saxophonist Rich Perry and the orchestra glowed like a melding of healing and replenishment. 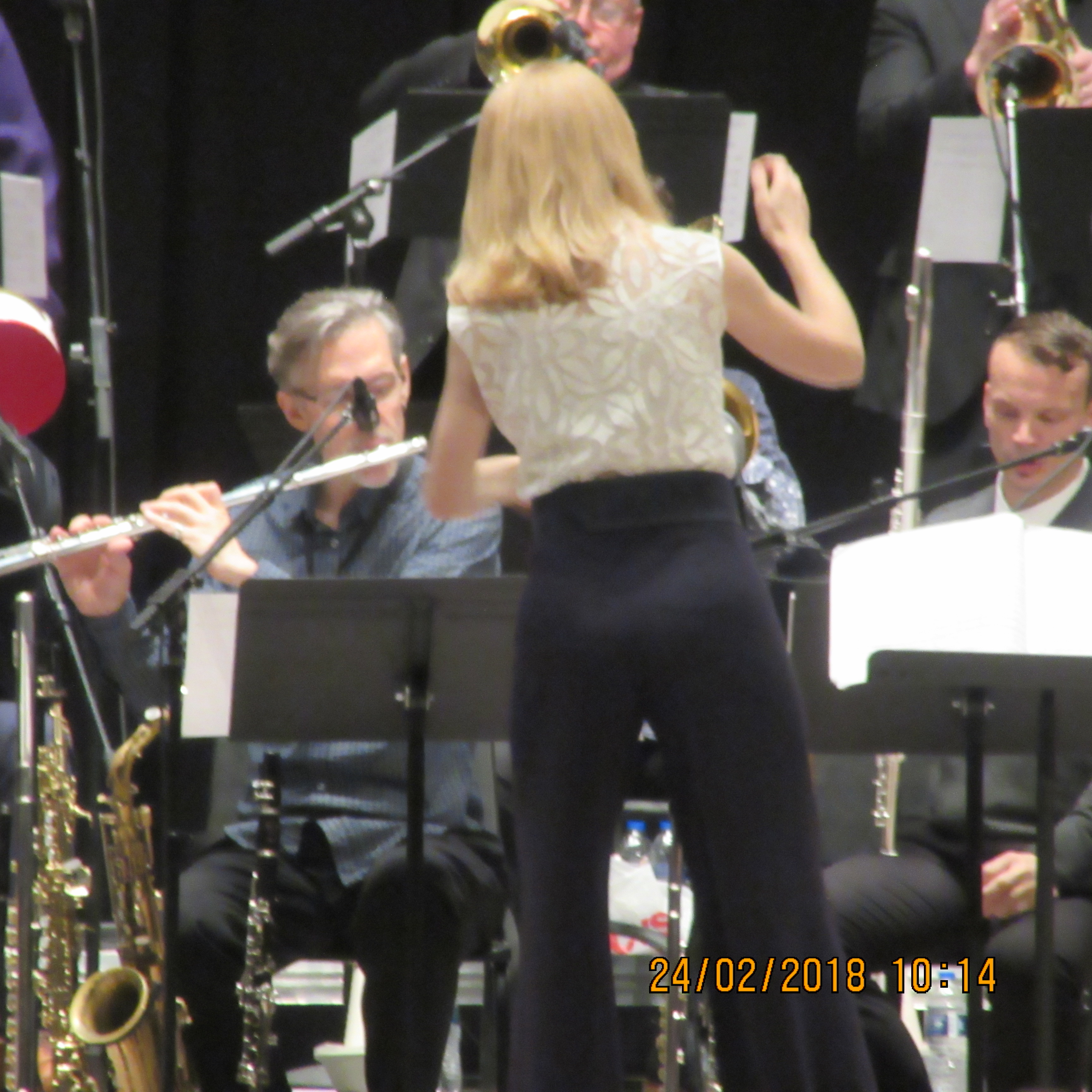 Rather then a top-down leadership, Schneider demonstrates a close creative symbiosis with all of her ensemble’s members.

And yet the concert provided abundant evidence that humanity is Schneider’s greatest concern – along with the faltering milieu of Nature, as source of such spiritual succor. First, there’s the fact that she creates music for the largest-populated ensemble of America’s indigenous art form, the jazz orchestra. So it is not only the sounds and extra-musical themes, but the living beings who produce them, that she tends to. 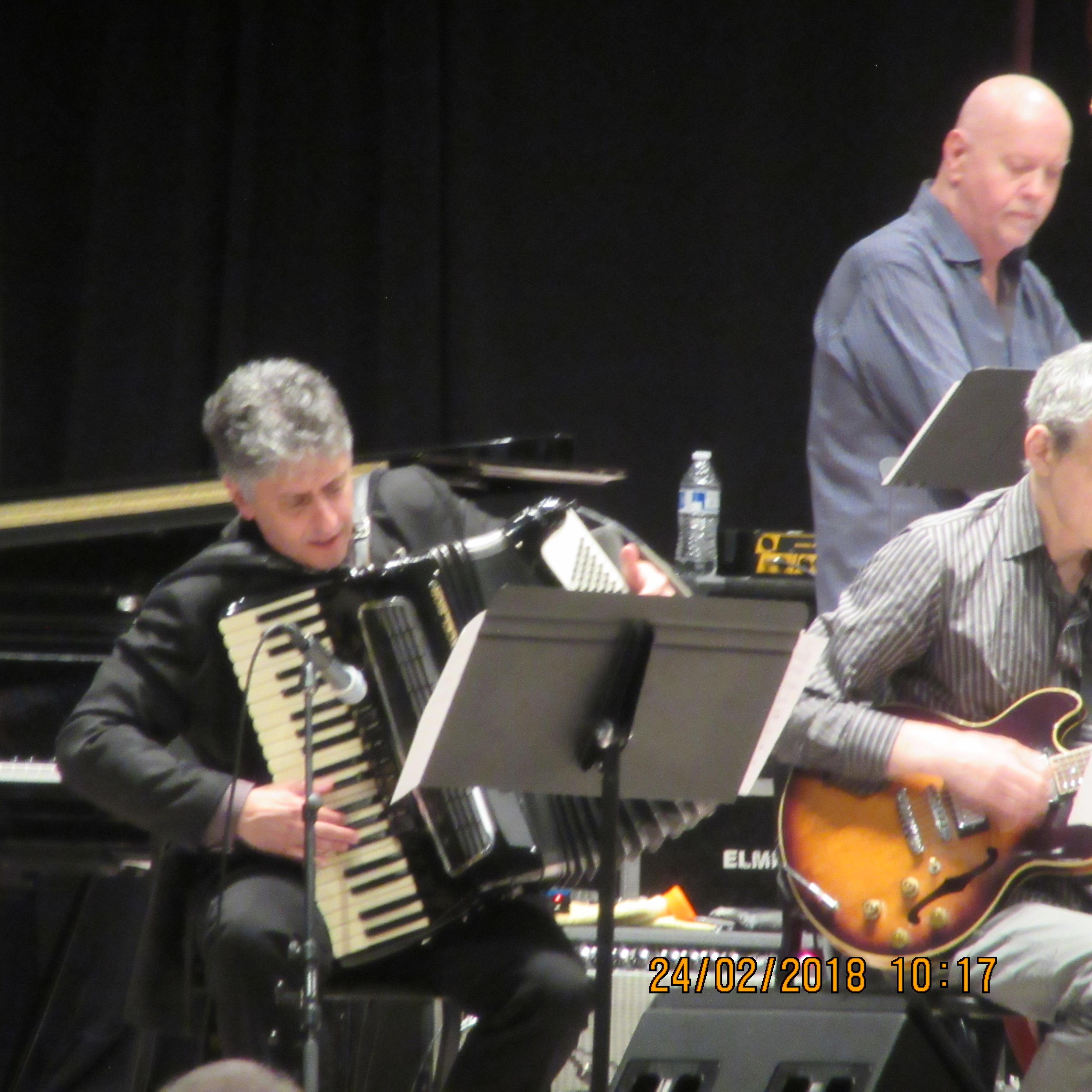 Accordionist and pianist Gary Versace, demonstrates the deep range of sonic possibility that composer-arranger Maria Schneider explores as a matter of course.

This was as evident in the fraught commission piece as any, as she allowed a kind of freedom for her players to rise up, commingle and explore together. She employed dissonance and collective improvising, but always controlled to some degree while repeatedly exhorting the orchestra to reach for bold, courageous outer limits.

She demonstrated her great artistry as a conductor, a craft of nuance and evocative power. Even on a damp February night, she wore her virtual trademark, a sleeveless blouse which seems to serve musical purpose in that her arms, like any conductor’s, crucially convey her artistry’s particular powers. The limbs, adorned only with passion, move as meaningfully as an airborne embrace.

Her personal connection to her musicians arose immediately in the opening piece, “A Potter’s Song,” an ode to Lori Frank, of whom she wrote in her Thompson Fields liner notes, as “our dear friend who played trumpet in the band since the making of our first recording in 1990. Lori was a fellow Midwesterner by birth, born in Nebraska. A person of  tremendous integrity, talent, skill, humor, warmth, and tenderness, she’s deeply missed by all who knew, played, studied, or shared a ceramic studio with her.”

Note, in the lilting staccato of her extended description of Ms. Frank, an ardor that underlies the rhythms of Schneider’s radiant lyricism. 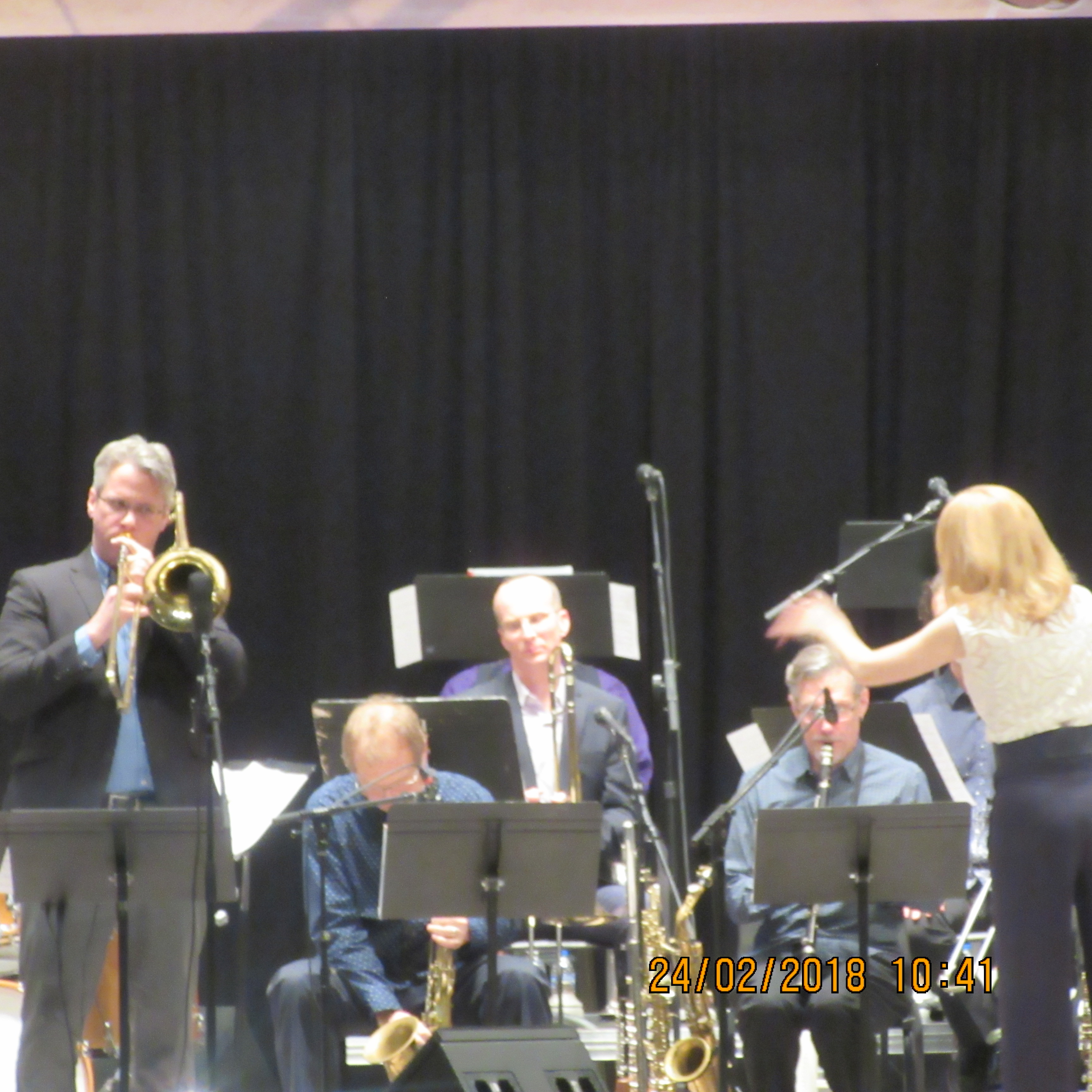 When she’s not conducting, Schneider remains closely attuned to the playing of each soloist, here trombonist Marshall Gilkes.

It’s also evident in concert that she’s intensely involved in appreciating her band members’ playing. When they solo with only the rhythm section, she refrains from conducting but remains vibrantly attracted, like a moth to the flame. She seems also to revel in the presence of the audience, as “so many smiling faces,” which might seem innocuous or even heart-string plucking. But Schneider risks such a moment with the adroitness of her music’s redeeming powers. Even if the utterance summons sentiment, it’s the finest-honed kind, worthy of a heart’s game sturdiness.

Similarly, in an act somewhat unusual for a “star” of this magnitude playing in a formal concert hall, Schneider offered, at the end, herself to her fans, to chat and sign autographs right at the foot of the stage, where a long line of admirers quickly accumulated. 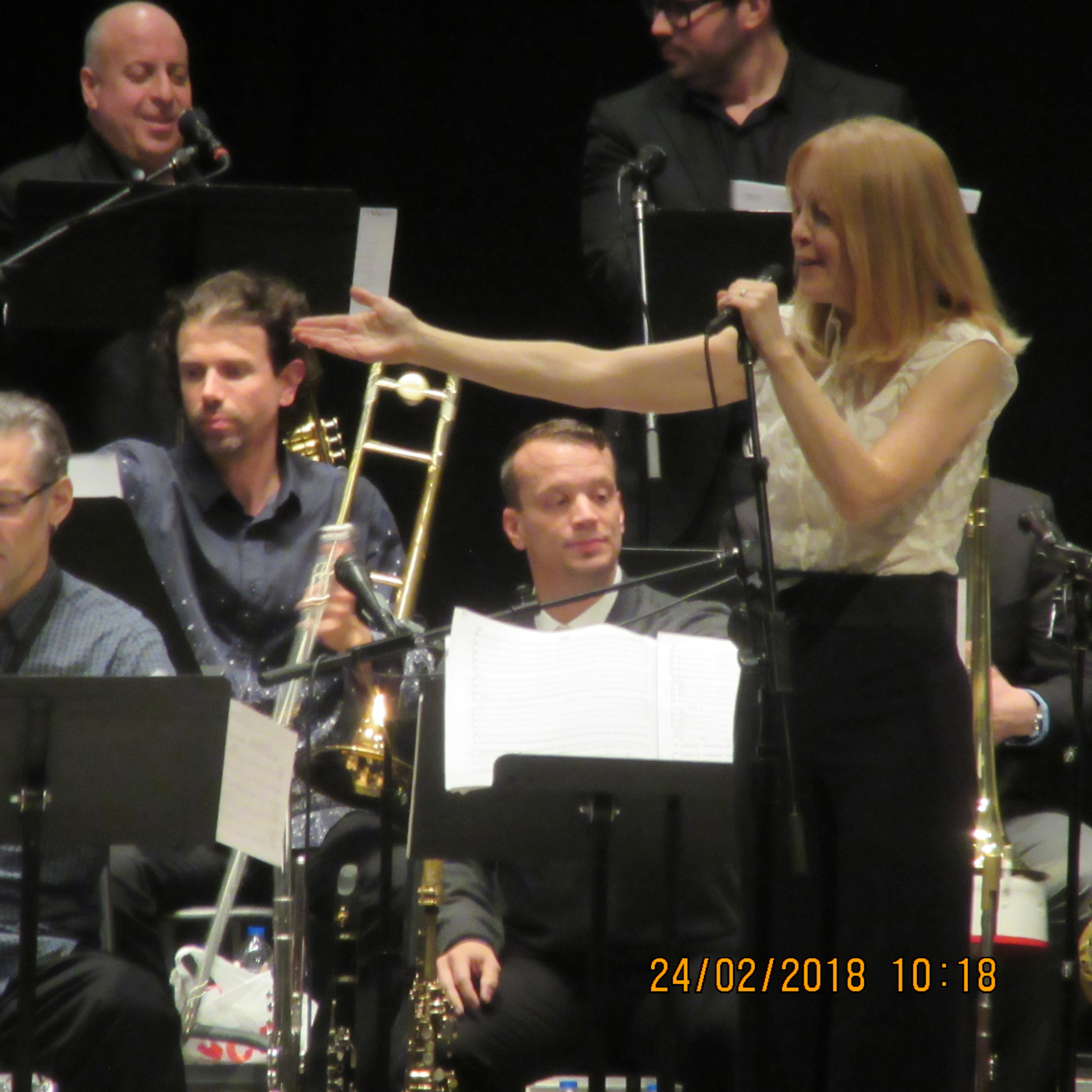 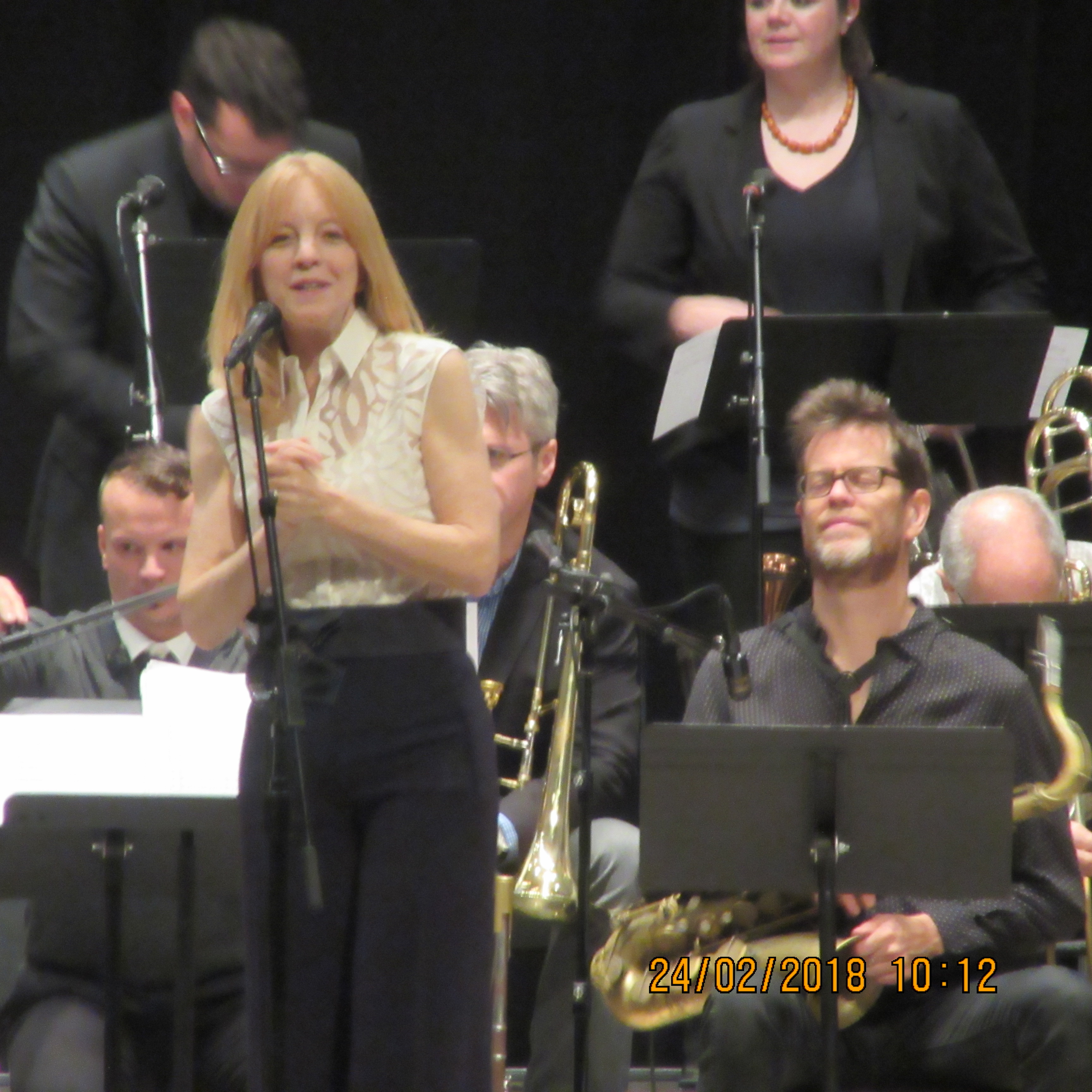 Maria Schneider expressed deep appreciation to each soloist as well as to the large audience at Saturday’s climax to the Elmhurst Jazz Festival.

If this night’s music be food for thought as well as feast, I’m thankful for the wealth and bounty Schneider has wrought over several decades, as she’s climbed to her pinnacle. One senses, however, she’s hardly finished with searching out new peaks, that hill and dale will follow her far, more likely to sunlight than not.