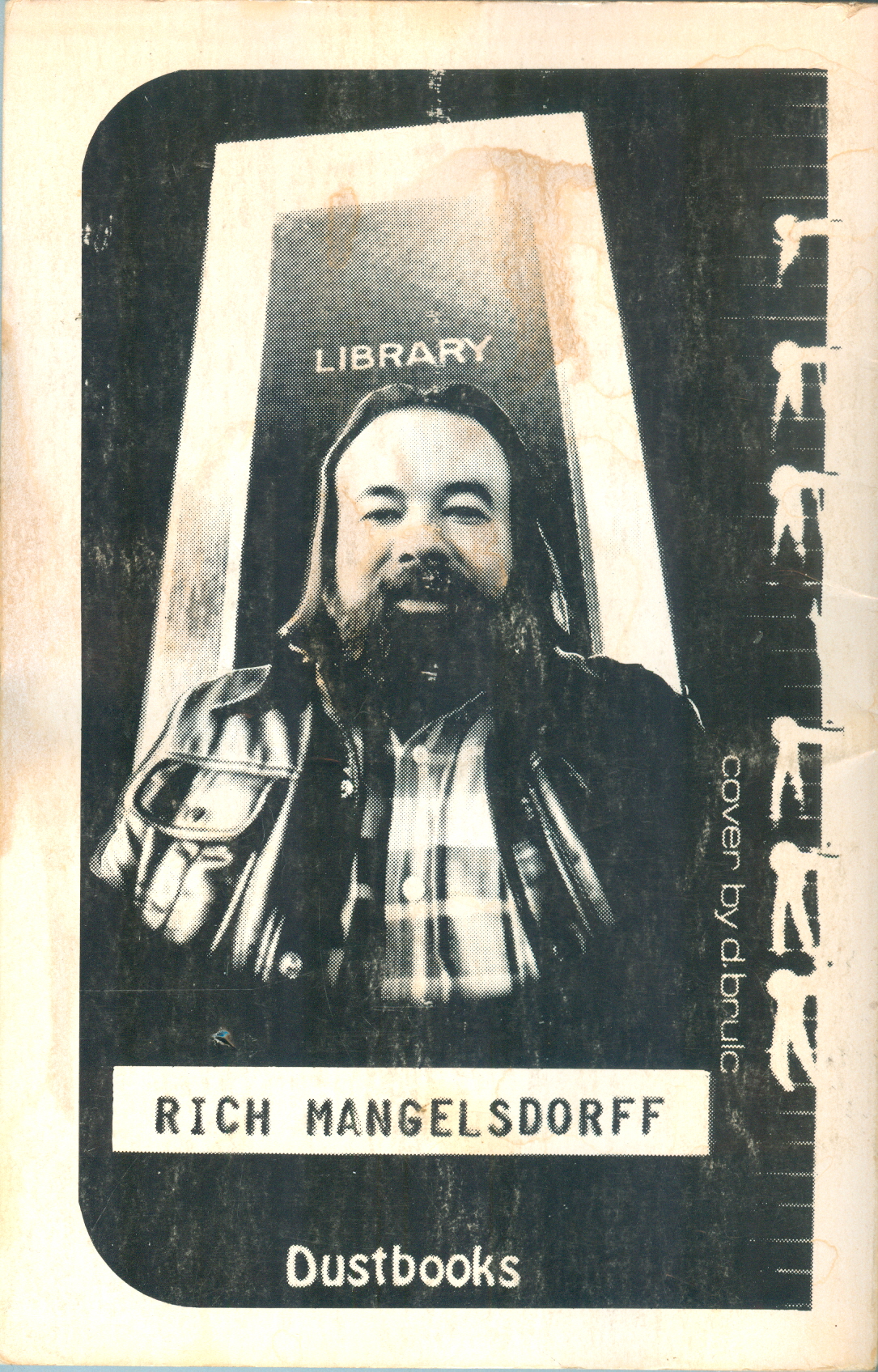 Back cover of “The Collected Essays of Rich Mangelsdorff,” Dustbooks, 1977. Courtesy Harvey Taylor

“I love all men who dive. Any fish can swim near the surface, but it takes a great whale to go down stairs five miles or more…” – Herman Melville, in a letter to a friend, critic-editor Edward Duyckinck, March 3, 1849, three years before the publication of Moby-Dick.

Until I visited him in the hospital a few days ago, long-time Milwaukee arts journalist, essayist and poet Rich Mangelsdorff had faded somewhat in my memory, but not my consciousness. I think he would readily appreciate the distinction. Despite his comparative absence from the scene in recent years, part of my sense and critical understanding of the city’s cultural scene is formed by Mangelsdorff.

He wrote insightfully about the importance of “raised consciousness” in his substantial book Collected Essays of Rich Mangelsdorff published in 1977.

Mangelsdorff always cut an imposing intellectual as well as physical figure, as a tall, large-framed man with a high forehead and a fulsome black beard. He spoke deliberately and sometimes with pointed pungency. He doesn’t suffer fools gladly. Yet, as I describe him in my forthcoming book Voices in the River: The Jazz Message to Democracy, a high-pitched giggle incongruously emitted from his hulking frame, disarming some who might’ve been otherwise intimidated. This man’s character and personality intrigued and attracted me.

Today he remains – even lying in a hospital bed after surgery to diminish his serious bladder cancer – keenly attuned to the idea of comedy. As we talked, he brought up the  acerbic, machine-gun-mouth social-critic comic Lenny Bruce. I’d asked him about what sort of perspective might have been lost from the days when he was writing his essays in the 1970s.

“So much of it has to do with the use of computers and smartphones.” Mangelsdorff said, referencing recent research showing how excessive use of smart phones may negatively impact cognitive and literacy abilities. Ironically, Rich now struggles to speak, due to medications and cancer’s ravages, but his brain remains vise-like. “But also, years ago we had somebody like Lenny Bruce,” he says. “He wouldn’t be listened to now, but I saw him at a Milwaukee club in April of 1966 or 1967, and one woman stood up and called him an asshole. Then there was Mort Sahl, who paved the way for Lenny Bruce and others.”

These comics fearlessly spoke truth to power, as harpooners of squirming hypocrites. Bruce fought the law and the law won – the battle, but not the war. 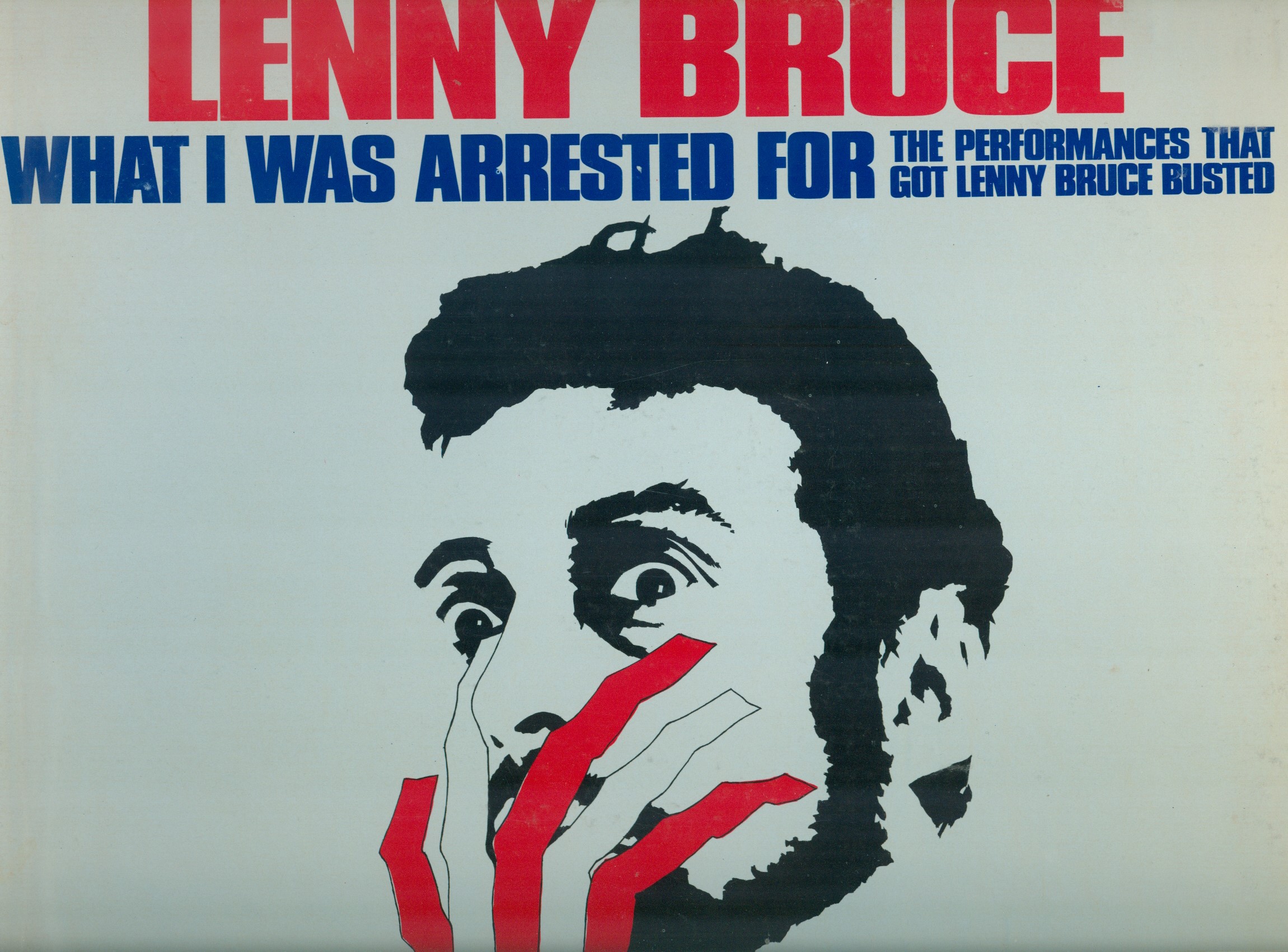 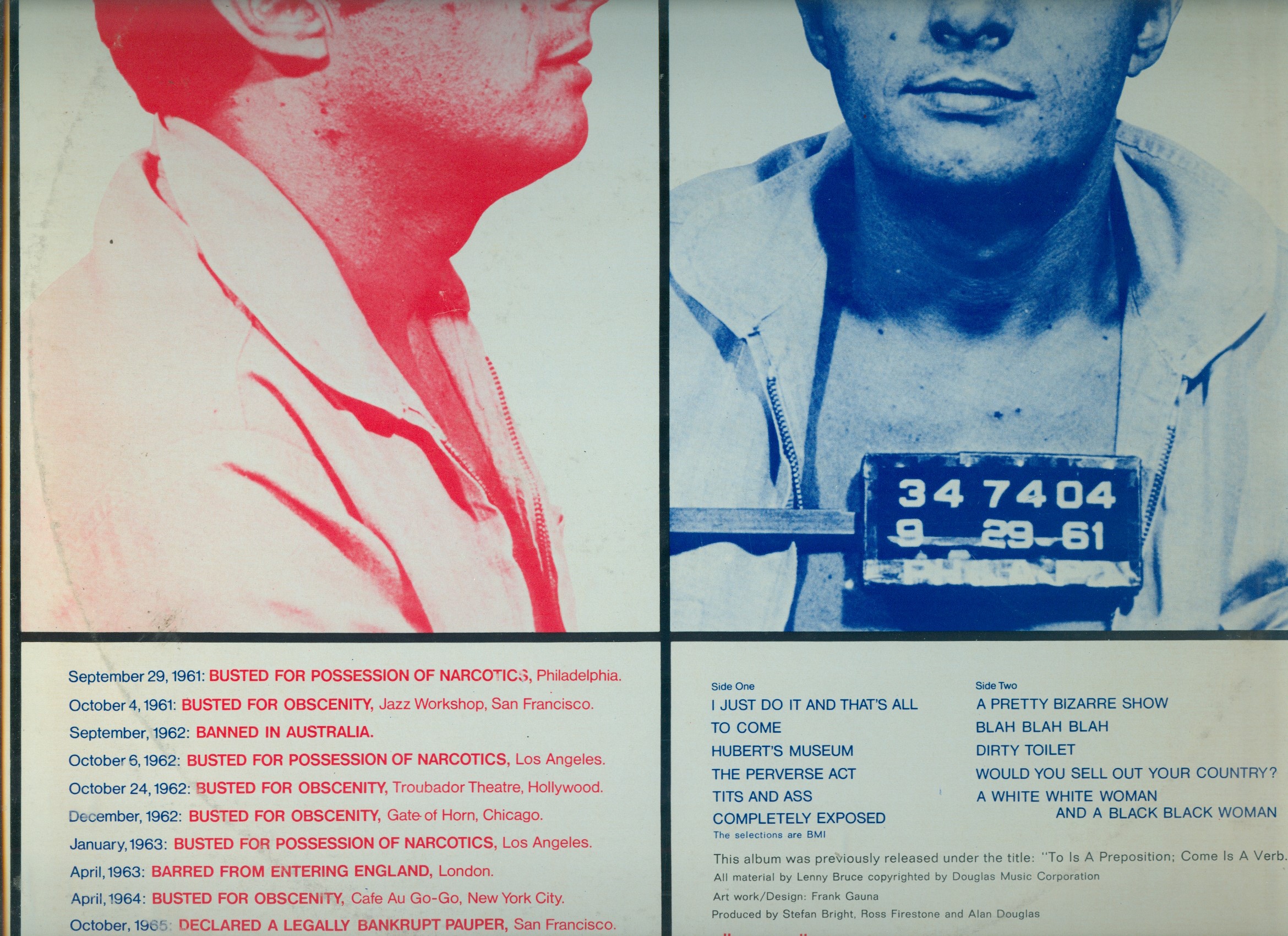 Front and back cover of Lenny Bruce album, “What I was Arrested For,” Douglas Records,  1971.

A brief Lenny Bruce bit from “What I was Arrested For,”  which punctures conventions of perception based on skin color:

And here’s a more provocative and funny Bruce bit: “How to Relax Your Colored Friends at Parties” from the album Buyer Beware:

To me, Rich Mangelsdorff, even now, hooked to an oxygen respirator, is like a great, graying Buddha. Perhaps, the laughing Buddha, but also one who, back then, in his trademark black leather jacket, could as readily fall into meditative silence, sometimes stewing about injustice, corruption or unheard prophets.

As for the rise of Donald Trump, Mangelsdorff says those who voted for him and continue to support him reflect, aside from delusion, “a malignancy of spirit. People actually choose the path of division rather than the path of unity. People think that Hillary might’ve had an easier time, but I don’t know.  It’s like we’re constantly dealing with an old, drunken, ranting white man.”

As for my aforementioned Mangelsdorff “consciousness” factor: He was my counterpart as jazz critic for The Milwaukee Sentinel in the 1980s, while I was covering jazz for The Milwaukee Journal. I often had the advantage of seeing Mangelsorff’s review of what I was writing about. The morning Sentinel’s first edition circulated The Journal newsroom to the few people still at work late at night, while I wrote my review, which would run in the afternoon.

I never mimicked his insights, but they helped refract my own perspective on what I had just experienced. You can see for yourself our parallel critical commentary in the journalism anthology Milwaukee Jazz Gallery 1978-1984, published in its second edition last year, and available at Boswell Books and Woodland Pattern, as well as online.  Mangelsdorff had to shoot from the hip, with tough-minded, vivid accuracy.

I still picture him on his tight, morning newspaper deadline — a dark, furrowed brow, harrumphing softly to himself, as an insight or phrase came to mind.

But to see how he thinks about jazz, here’s an example from when he wasn’t on such a tough deadline. It’s from his book Selected Essays, and notice his unassumingly deft comparative plumbing of the creative webs that entwine jazz and poetry:

“I’d personally like to see more poets take off in that direction – not the jive it could easily degenerate into, or the slavish imitation of some favored ethnic rap, but rather, synthesis in the direction of something loosely brilliant, like Elvin Jones or Billy Higgins playing drums (and how many poets with big ears has jazz loosened up, speaking of latter-day influences?).” 1

Or check out this long, powerful riff by Mangelsdorff, which marks the dynamic immediacy of the era’s contemporary jazz and presages the ascendance and profound impact of rap and hip-hop music in 1972:

“I’d always felt this gap between the means and language of poetry in the kind of swift, mental-energy exchanges that black people could get down on rapping in the street, that comics like Lenny Bruce communicate & that they’re spritzing back room precursors, by-passing explanational trappings, could communicate even more truly, that jazz musicians (and Coltrane, Ornette Coleman, Cecil Taylor, Shepp and the All-Star Blue Note lineups of Hancock, Davis, Williams, Hutcherson, Hubbard, et. al. were fueling my head like butane in those days) evidenced with grippingly articulate abandon and/or snake charming wiliness.” 2.

How many people of any stripe have seen such connections, taken these sorts of double-dip deep dives, back then?

Rich and I were mutually respectful competing journalistic colleagues, but also friends, especially as two of the closest compadres of the late but unforgettable Jim Glynn. Despite being paraplegic from a Jeep crash while serving in Europe during the Vietnam War, Glynn possessed uncanny dynamism and charisma, especially as a high-flying culture vulture, a vision of inspiration lifting his disabled body improbably along to the hippest or most important music event in town.

Mangelsdorff’s Selected Essays remain paramount in his still-underserved literary legacy. Read insightful literary criticism of the iconoclastic poet Charles Bukowski and others influenced by him, like Doug Blazek, T.L. Kryss and Bill Wantling. In another essay, he holds up to light the period’s best contemporary experimental fiction: “Its exterior is complex, even baffling, to anyone not sufficiently high to get into it. Yes, that’s what I said. Raised consciousness. That’s what she’s all about. Read people like Wildman, Chambers, Sukenick: they’re talking to a new and different fictive sensibility, even if, as was the case with Joyce and his Dublin (and Dubliners), it is one which has already generalized itself through our lives and times.” 3

Note his vernacular use of the female pronoun. Mangelsdorff sounded a unifying, if challenging, clarion for all sensate beings, right from his first-ever piece of criticism for Kaleidoscope, the pioneering alternative newspaper in Milwaukee in the 1960s:

“Serious rock (music) is a constant pushing forward of the shores of awareness, expanding the frontiers of sound and, as the liner notes to Jimi Hendrix’s album state: put(ting) the heads of…listeners into some novel positions,’ i.e. consciousness expansion…” 4

In that Kaleidoscope essay Mangelsdorff also underscores specifically the “psychedelic experience,” as an empowering medium which may yet provide incalculable potential for humanity. It’s easy to poo-poo such notions today, when we assume most of our power lies in a click under our finger, a mouse that potentially roars. That click can also sound like a solitary cricket — meandering, lost, easily manipulated. Surely we need fresh, diverse ways to tackle the intransigence of our political and social institutions. 4

Mangelsdorff’s writing still carries a load, as America grapples with marijuana legalization, with the herb’s great medical value, and reputation, anecdotally and deeply researched, for expanding consciousness, to frontiers far beyond the shores of reactionary stumbling blocks.

He long foreshadowed rock songwriters as Nobel winners, how various American artistic vernaculars generate “novel” intellectual and spiritual positions, which lead to enlightened action. Could we still imagine alt-music and culture growing against the craggy crevasses of “malignancy,” like a healing, marching cry along “the path of unity”? Might the culture yet form diverse yet converging paths, rising in rough-but-ready harmony, powered by a sum greater than their individual massed strengths?

Steve Cohen, the renowned blues-jazz harmonica-guitar virtuoso, is among many local musicians who hold this writer in high esteem. “When he was in full swing, I thought Rich was the best music critic in town,” Cohen says. “When my band Leroy Airmaster made an album, I wanted to him to do the liner notes and he did a great job. He would also visit my radio program on WMSE in the 1980s and offer his insights, which I thought were as great as any in the world.”

As Mangelsdorff sits now in his seventh floor hospital room, he can see the classic North Avenue light tower, standing over Lake Michigan’s vast horizon of darkly brooding clouds, like a sentinel. We talked for nearly two hours, so I suspect he was exhausted, although he was happy and urged me to come again. 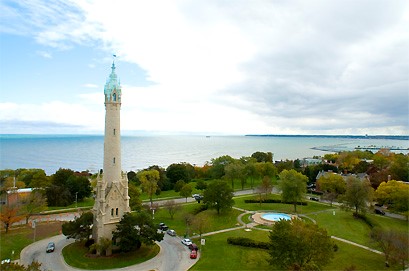 I suspect he soon fell asleep, but I’d prefer to think such a mind – long immersed in cutting-edge literature and culture – might have rechanneled its consciousness, maybe alighted upon the great rhetorical pondering of Philip K. Dick: “Do androids dream of electric sheep?” That, of course, was the original title of the Dick novel that became the pioneering noir sci-fi film Blade Runner. The novel, published in 1968, is set in a post-apocalyptic San Francisco. Planet Earth, ravaged by nuclear global war, is invaded by android aliens who may – or may not – threaten human survival. Most animal species are endangered or extinct from extreme radiation poisoning, and owning an animal, an “electric sheep” is now a sign of status and empathy.

That attitude brings myriad intelligent species on a path closer to survival, like a new Noah’s ark at a wary dawn, where perhaps little remains of Milwaukee’s magnificent shore, but that sentinel tower on North Avenue.

Rich also would likely know that “The Sentinel” was the original name of Arthur C. Clarke’s story, upon which was born the mind-expanding film 2001: A Space Odyssey. No matter where Rich Mangelsdorff’s consciousness soon ends up, the arrow in his well-stocked quiver will aim for the stratosphere.