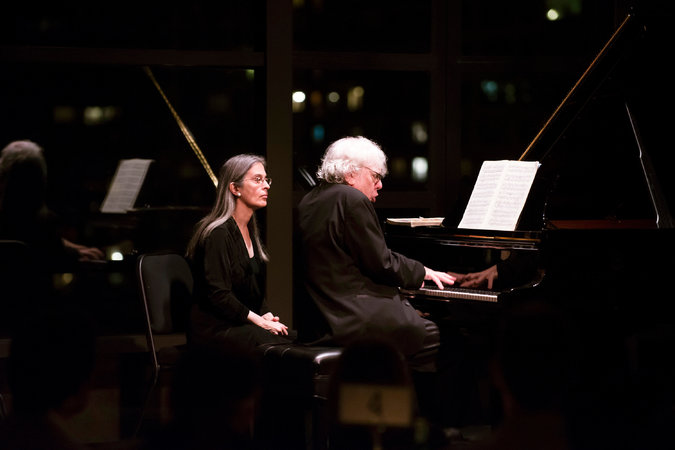 MADISON – The winds of time may ruffle pianist Richard Goode’s whitening hair, and he now sports spectacles to eye the score while playing. But nothing has diminished his fluency, and his ability to “recompose” music, as he once explained as an ideal, in an interview I did with him a few decades ago.

That means, rather than slavish adherence to the written notes, he finds a way to go beyond mere recitation and even interpretation. He convincingly seems to play music that emits from his whole being and perhaps his own creative soul, though it was born in the mind of a great composer.

He opened his recital at Wisconsin Union Theater with four Prelude and Fugues from J.S. Bach’s Well-Tempered Clavier, Book 2, exercises in stylistic range and digital dexterity, from the F sharp minor’s elegant pacing that finally bloomed in counterpoint, to the resplendent harmonies and dancing gait of the G major. The pieces continued in a bubbling brook of counterpoint, the left hand prodding the right into sheer effervescence, even with a slight flub amid the dazzle. Goode’s playing built to a robust lilt, a full-chested articulation, a master grappling with a musical god.

But what impressed even more was how he reinvented Alban Berg’s Piano Sonata Op. 1, from 1908; giving the youthful work of the Second Viennese School composer maturity and depth I have not heard on recordings of this. The sonata is carved in a far rougher marble than Bach, with plenty of raw, wide-open veins. Berg was beginning to explore the implications of 12-tone technique, but Goode revealed this as still-romantic in its roots, amid sweeping lines and with a segment of counterpoint that alludes to Bach, an ingeniously apt program pairing. Goode gave the Berg voluminous grace that didn’t deny its grit. Halfway through the 10-minute sonata came a passage nearly tender, but which grew into a firmly-laced fortissimo, flinty yet majestic. He made this tough music breathe and, yes, sing.

Sometimes literally. Goode has always performed with an extremely animated face, especially with an utterly pliant mouth and lips and at times in the recital one could hear him humming softly along with his dancing fingers.

This all brought special resonance to the concert’s centerpiece, Beethoven’s Sonata No. 28 in a minor, Opus 101. He opened it more forcefully than his cherished recording of the work, without the perhaps-precious tiptoe-over-the lily-ponds effect. But now the pianist gave the opening melody a stronger arc of line, and elegant dance of hands that befit the acerbic chords that ensued, which nevertheless melt into a harmonic azure. 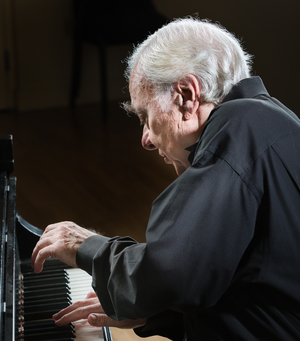 The second movement’s march unfurled smartly, left hand crossing over right, then the left rising above the keyboard to pause, then both loping and strutting. This was not without some misterioso in the bass, which foreshadowed the adagio.  This somber interlude is brief but just enough, with Goode’s exquisitely held-breath pauses, yet a lovely undercurrent kept the tempo aflame. And at one point, his craggy brow and imploring lips brought to mind an aging Charles Laughton revisiting the pathos of his greatest screen role, as love-lorn Quasimodo in The Hunchback of Notre Dame, eloquently pouring his heart out to the cathedral gargoyles.

And yet Beethoven, with his own bedevilments, breaks free of his emotional quicksand, as did Goode. The finale slyly alludes to the march with songful Germanic hubris – the piece unfurls in swarms and stitches, the structural and improvisational aspects melding all of a piece, devil may dare and so does Beethoven.

After all this meat and potatoes, the post-intermission program of all-Chopin seemed a buffet of desserts, yet hardly without its strains of depth and glory. First, Goode book-ended four spritely mazurkas with a nocturne and the Ballade No. 3 in a flat major, Op. 47. That B Major Nocturne lent a smokiness to the underlying melodic sweetness and, among the mazurkas was the C major, spring-like and flirting with summer with the sound of rough-housing young rascals (lending rue to one’s rainy November mood). By contrast, the D-flat major mazurka is more probing and graced with the scrim of chiaroscuro, yet solidly grounded in the dance pulse.

These pieces set up the sumptuous Ballade, which is surprisingly acerbic, yet the melody shines among the composer’s most fetching, like a single determined flower breaking through earth, bolstered by its stout chromatic heart. Then this beauty is circled completely with arpeggios, and many aspects of the tempo and theme fragment and reassemble, a work of surprising power and radiance, which summoned its own ovation from the audience.

Then, another Nocturne, in C sharp minor, felt like a man soaking up the night, letting darkness infuse himself; he walks around, a shadow, a living mystery but somehow without denying his palpable existence.

It all ended with a Barcarolle in F-sharp major, with one of Chopin’s most beguiling, almost innocent melodies, yet the pungent key lent it heft and tart radiance.

For all this, Goode deserved an encore, and he chose a theme variation by British Renaissance-era composer William Byrd, written for one Lady Neville. It was a watery creation with swiftly coursing lines and glimmering light, but it also had some gallant flourishes, giving the lady honor, as in her subject’s most artful, sweeping bow (dripping wet?). She was finally charmed with a fugue passage that sounded born of a folksy English air, and she surely was satisfied.

Centuries came and went, to and fro, and Richard Goode remains the most sure-handed of time-traveling guides.