This post follows, in large part, the pull of nostalgia, which had me recently trekking over to the UW-Milwaukee’s art building (in the Peck School of the Arts), on a sunny windswept afternoon…I’d spent countless hours in this building when I was earning my BFA in the early ’70s. Especially time-consuming was the work on bronze cast sculpture molds, which required applying layer after layer of silica sand slurry to the mold…and waiting for each layer to dry…to build up a sturdy resistance to the infernal temperatures of the prepping furnace before pouring the fiery lava flow of molten bronze into the mold for a cast sculpture. 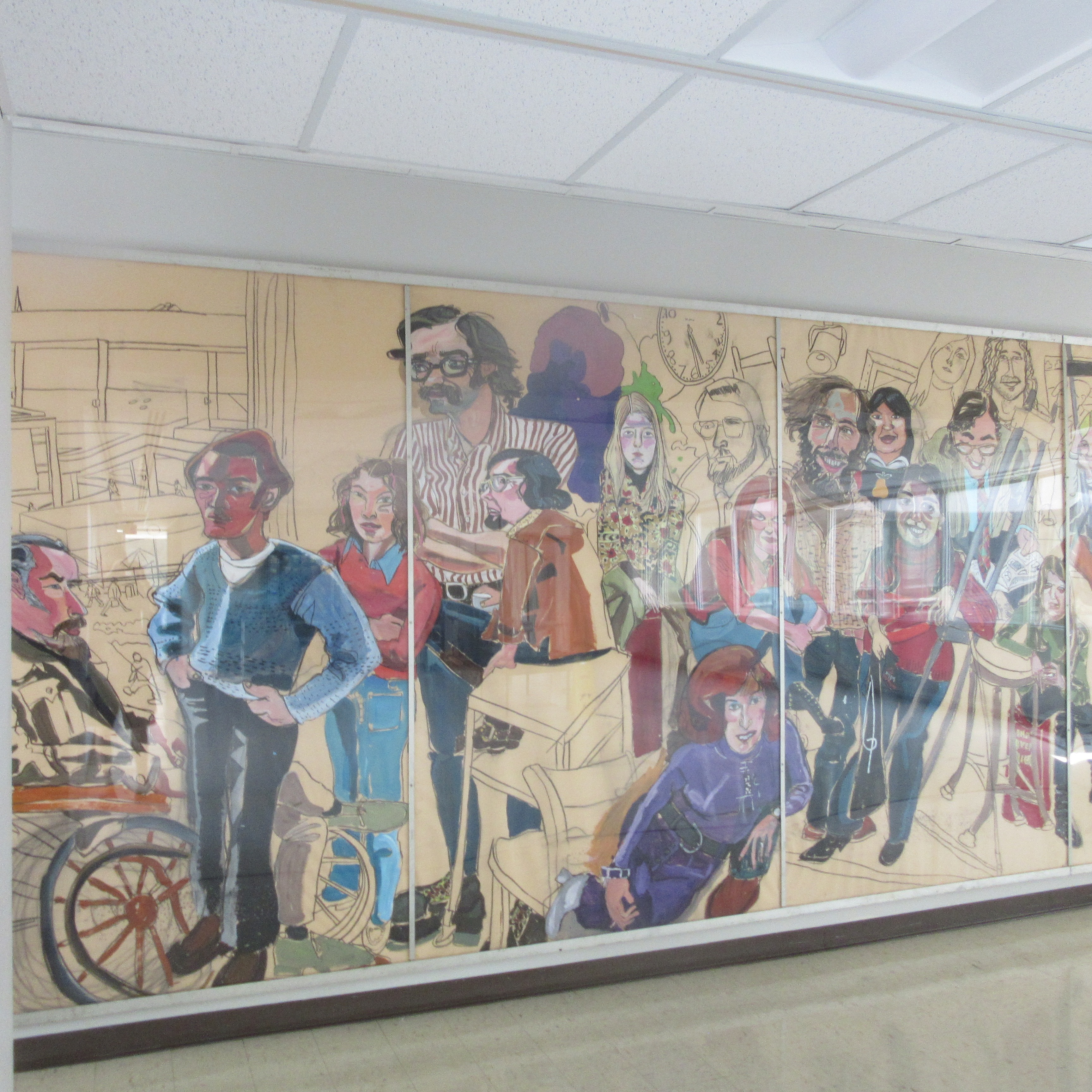 A portion of artist Red Grooms’ mural group portrait of students and faculty of the UW Milwaukee art department in the early 70s, still located on the second floor of UWM’s art building.

During some of those slurry sessions I envied the folks up in the fourth floor, where painting was the area of concentration. But we make our choices and at that point in time I had chosen art that I knew would literally stand up and be counted and appreciated from all directions in its own space. Part of it began with the fast gratification of first working in wet clay and coming up with forms fairly quickly, someone akin, in three dimensions, to the gratification enjoyed by working painters swimming in intoxicating oil paint.

The crossroads between painting and sculpture leads me to my present subject, which I’ll try to be brief about, given that I just recently wrote an extended review of it off Rosenblatt’s retrospective at the Jewish Museum of Milwaukee, which is here:

The exhibit, primarily of figurative ceramic sculptures, will close this Sunday, when it is viewable from noon to four although there are also viewing hours Thursday and Friday. Four hours and Info, click here:

Rosenblatt, who died last winter at 83, was a remarkable man and artist, with an outsized personality to match. Though short in stature, he could fill up a room with his presence, especially when he started laughing.
Rosenblatt’s daughter Sarah commented, in sharing my review post on Facebook, that she considered her father a handsome man, so she was uneasy with my description, which spoke of a disparate assemblage of parts in his face. I even drew a comparison to a face Picasso might create. 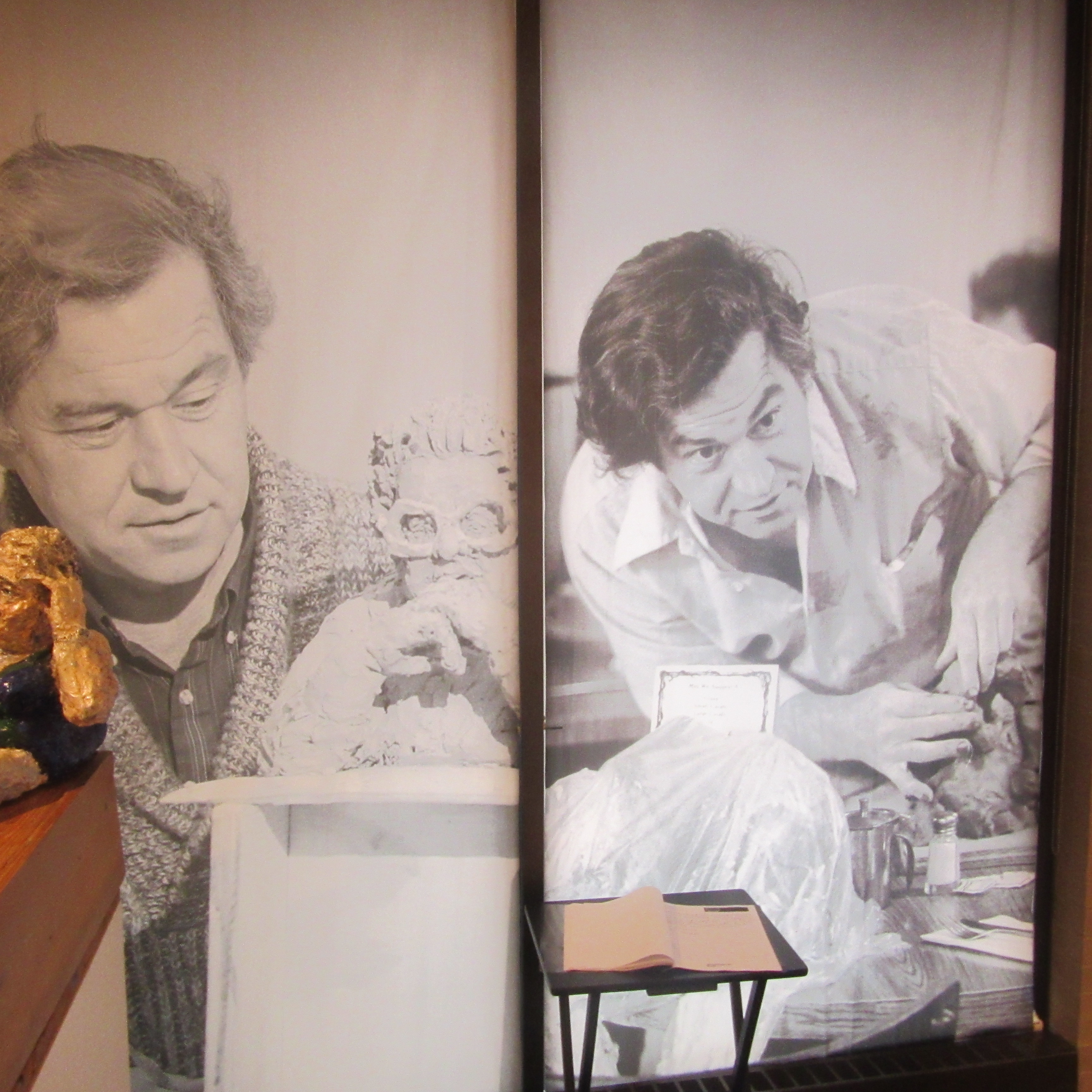 Blowup photographs of Adolph Rosenblatt at the retrospective of the late artist, at the Jewish Museum of Milwaukee. The show will be closing Sunday.

I would agree with Sarah that he was, in his own way, a handsome fellow, as the blow-up photos of him, probably in his 40s, show (above) at the Jewish Museum exhibit.  His long dark locks were dashing, with their deep, natural swerve, down and up the side of his forehead.

But she understood my impression of him and, and reminded me of the portrait of her father in the marvelous mural (see image at top) the New York-based artist Red Grooms had done of faculty and students of the UWM art department in the early 70s. I recalled it had graced the art department commons lounge  right outside the fine art gallery, for years. Sarah told me that yes she was referring to the mural, and that the mural was still on display there. I was delighted to know this, and decided I would go revisit it, before the Rosenblatt show ended this Sunday.

Turns out, Grooms’ mural remains easy enough to see during hours that the art school is open. Simply go to the second floor. The elevator opens and there it is.

It remains a stupendous and utterly delightful work, for anyone to see, though nostalgia enhances it for those depicted in it, or who were part of the art department then.

Several outstanding faculty members are depicted in the left portion of the mural (at top). Note the looming mustachioed man, Tom Uttech who, to this day, I’ve never met or seen in person. He stands as tall and imperiously mystical as one of the grand trees in his woodland paintings, magical mystery tours that are among the most beloved productions of any Wisconsin artist.

I’m not sure who the professor is sitting in the wheelchair at the far left. Anybody out there who can name him, or anyone else here?

As for the mural’s other inhabitants, I don’t recall the names of hardly any of the art students partly because I spent, by then, most of my time down in the building’s basement with the scruffy sculptures students. The painters on the fourth floor always acted good-naturedly as if they were a bit above us basement heathens and, of course, literally they were, by four floors. But I do recall the very sweet woman in the middle in the purple sweater, beneath the guy in the yellow Rolling Stones “bitch” T-shirt. Her name was Vicki, whom I may have met in Rosenblatt’s life drawing class.

Grooms ‘signature and the dates are visible in the panel below the seated fellow’s crossed crutches (in image below). 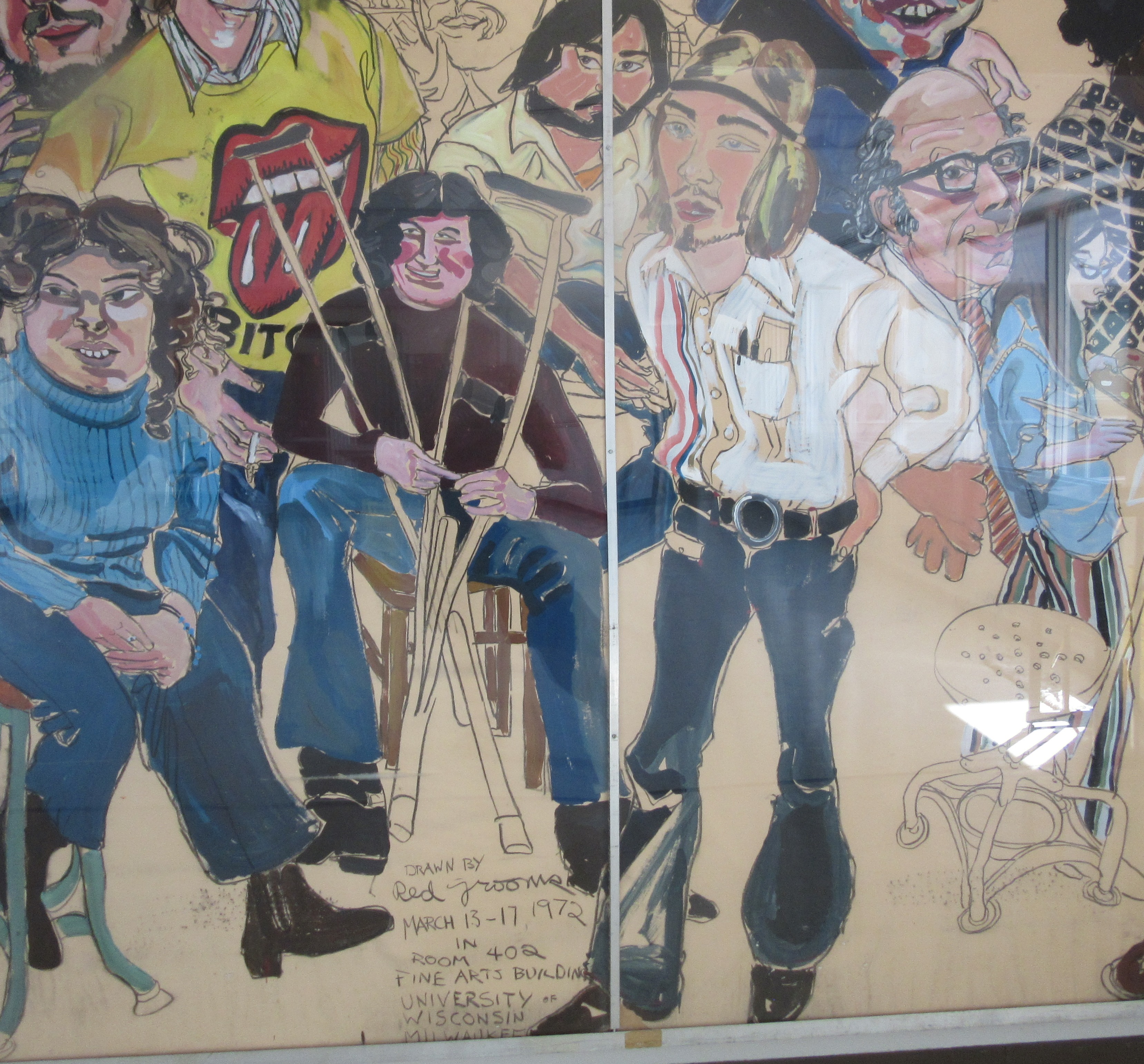 In the image below, you see Rosenblatt’s face. One senses that Rosenblatt’s presence may have helped attract Grooms to UWM For a residency given the affinity between Rosenblatt’s animated sculpture and Grooms’ celebrated 3-D pop-up arts. When he got here he also experienced the Milwaukeean’s mischievous hilarity, which was evident all over his face and head in the mural.

Now I realize that in describing Rosenblatt’s demeanor in my review,  I was subconsciously recalling this portrait – Grooms depicting his face as a nest of colorful strokes of energy swimming in crazy circles. I’m sure Rosenblatt dissolved into his jello-bowl of laughter over it, a number of times. 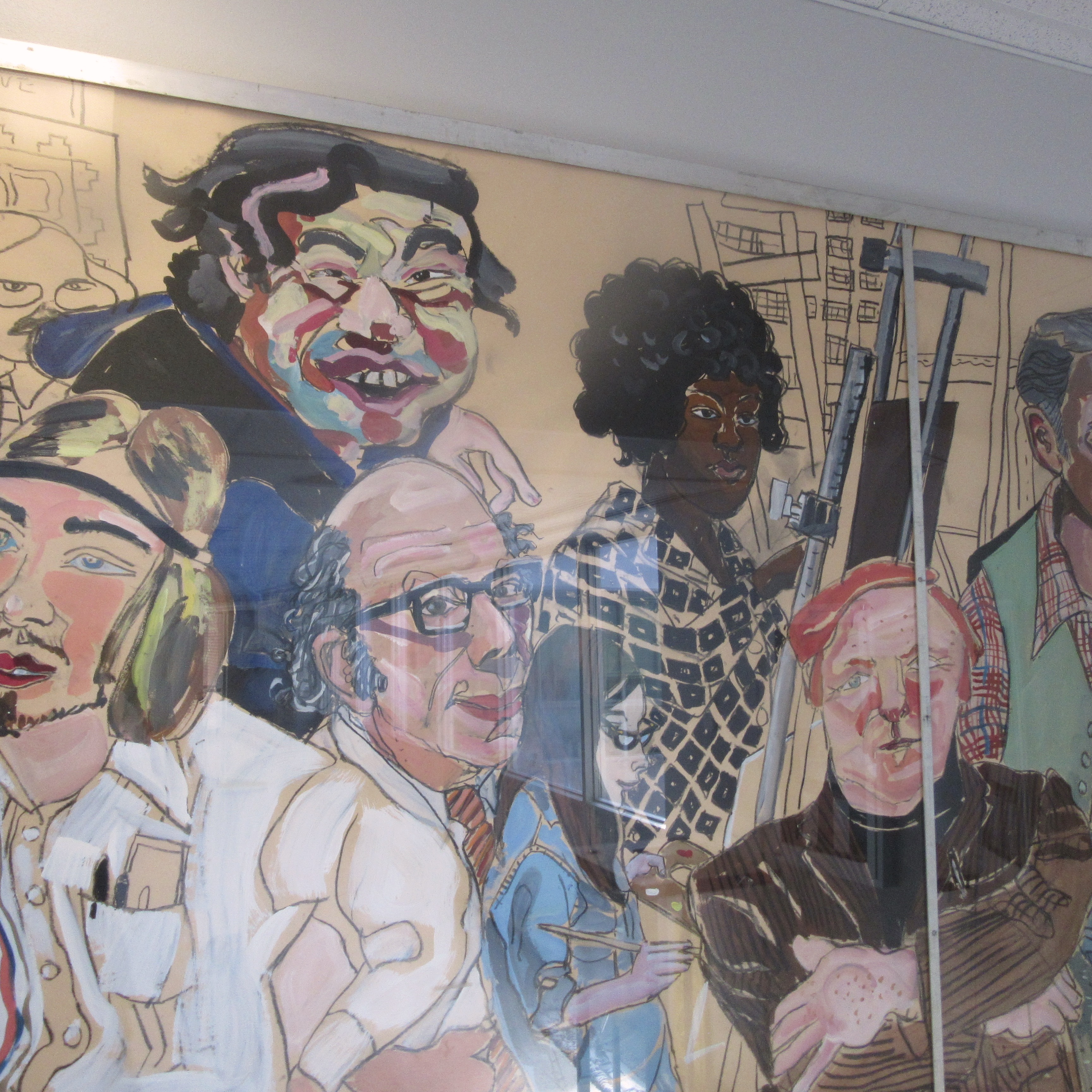 The colorful character of artist Adolph Rosenblatt is captured in Red Grooms image of him at the top of this portion of the UWM mural.

I’ve been thinking more about Rosenblatt’s inimitable laugh and now I think I recollect it even better. It seemed to have a looney hiccup right in the middle of it. He’d repeat the high-pitched giggle-hiccup several times before composing himself with a slightly satisfied, hoarse sigh.
It was a bit like the Mad Hatter in Alice in Wonderland after a few too many drinks. Not that Professor Rosenblatt was drinking on the job – life and art were clearly a natural high this man.

Below Rosenblatt in this mural section is bespectacled Professor Joseph Freibert, a far more mild-mannered man, but an excellent teacher and artist. To the right of Freibert stands red-haired Professor John Colt, an art department star, whose original painting style centered on mysterious, even mythical nature forms amid glowing, watercolor-like atmospheres.

I’m not in the mural, being a sculpting basement dweller. But I was there back those days, Below is a photo of me down in the sculpture department’s open-air courtyard, working on my carving to be titled “Chained Life Force.”

Yes this was the early ’70s, as you can tell from the styles of everyone in the mural as well as myself. May those times and people live on, as an indelible piece of Milwaukee cultural history. 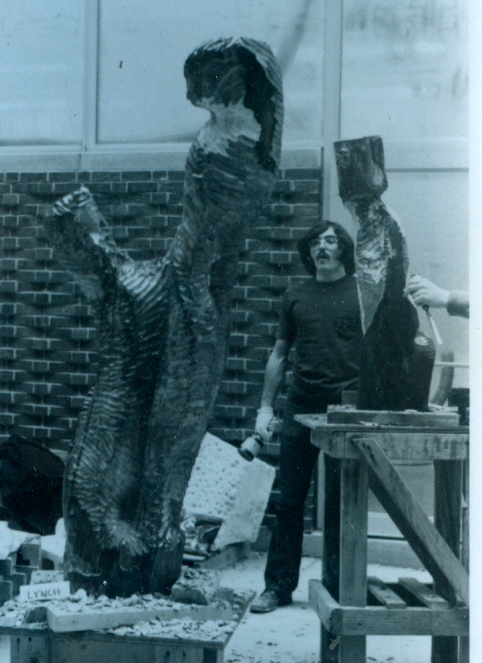 All photos of Red Grooms’ mural by Kevin Lynch

One thought on “Rosenblatt continued: Remembrance of art people past, and present”