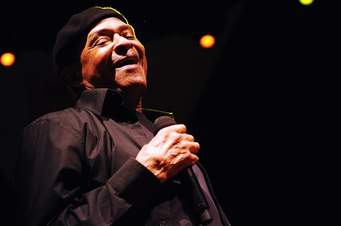 The great singer Al Jarreau grew up not far from where I live, just south of Riverwest on Reservoir Avenue, west of Holton Street. Right up the street, an expansive view of Milwaukee’s picturesque skyline unfolded, which might’ve inspired him as a young man to greater heights in life and music, and to retain some precious memories of his hometown, which he captured in at least two different originals — the title song of his first album We Got By and “Milwaukee,” from his second album Glow.

You can imagine Al walking down the nearby Holton Street Bridge, singing and practicing by himself (as saxophonist Sonny Rollins famously had done on the Williamsburg Bridge in New York). The bridge carries you to the East  Side’s hippest sector, Brady Street, and to downtown beyond. 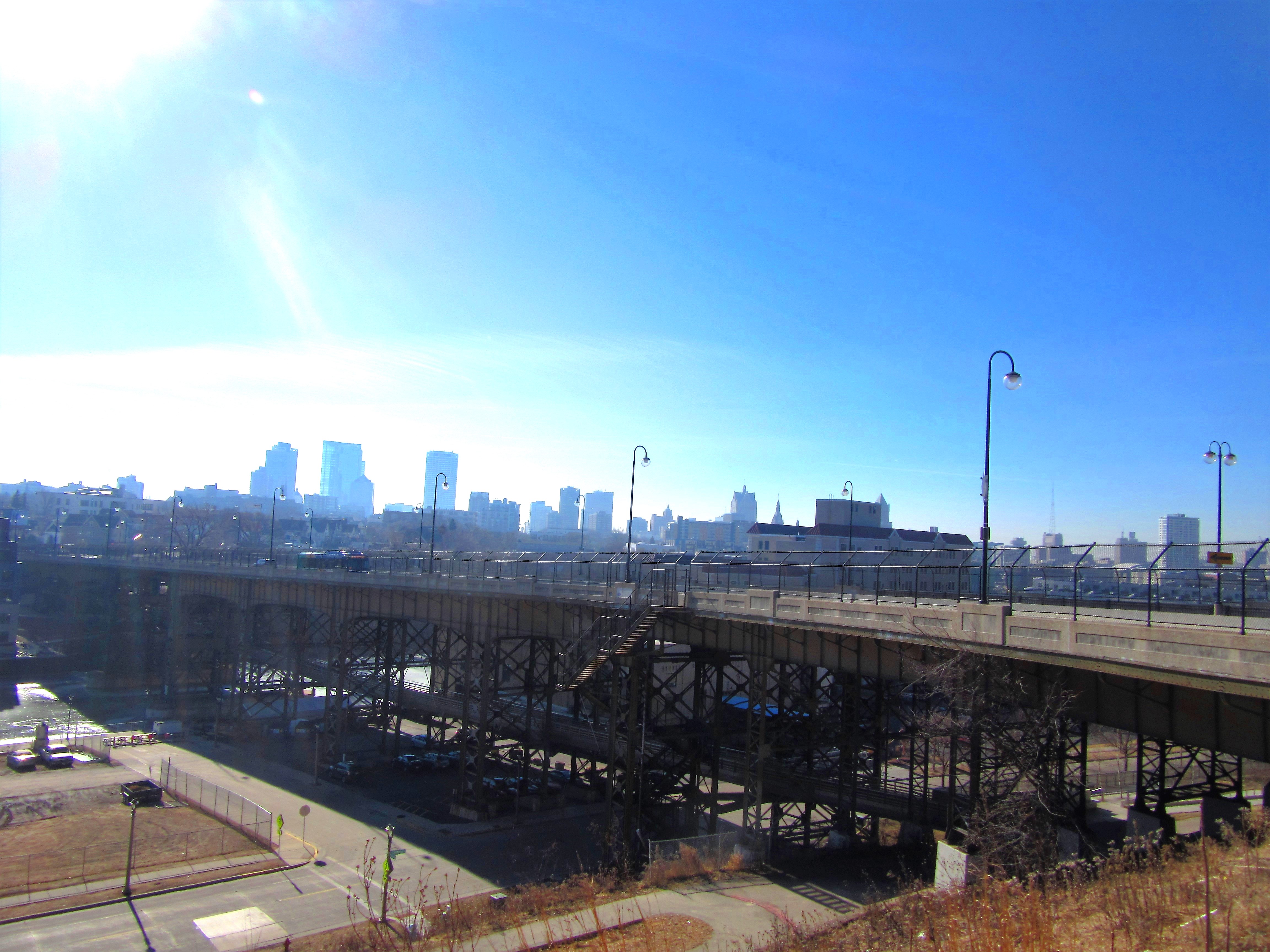 A view of downtown Milwaukee overlooking the Holton Street Bridge from Reservoir Avenue, where Al Jarreau grew up. Photo by Kevin Lynch

When Jarreau released that debut album I was working at Radio Doctors “Soul Shop” at 3rd St. (now Rev. Martin Luther King Jr. Dr.) and North Avenue. I fell hard for the album as did other “Soul Shop” workers and customers, including the store’s assistant manager Mark Olson, whom I remember a exclaiming, “This guy’s gonna make it, big!”

I had never heard of Al at the time, but he did not have a real long career paying his dues on Milwaukee music scene. His family migrated out to California and so he was still quite young when he started his recording career.

But even then, he didn’t sound like anyone else but Al. There was plenty of jazzy nuance and suppleness was singing and reflective moods. But he could also crank it up into a funky R&B groove and reach deep down for gospel depths. And that’s that was the combination and range is I’m sure what got him signed to a big label like Warner Bros. There were also tunes, like “Spirit,” that deftly juggled the stylistic differences.There were also songs in which he seemed to unlock his heart while declaring it was time to “lock all the gates,” knowing the harsh realities of the real world on the street.
But nothing of his ever beguiled me like that album’s title song, “We Got By,” a tender, ardent story of young life in Milwaukee:

I rode a bus, a train and sometimes
Strolling for miles to a movie show
Singing a song “Shoobedoo
“While birds and rich folks flew
Right on by

Winter wishes wait till June
We brightened July with
That hot dog fun
Tell your mama you’re with Sue
You bring the beans and I’ll
Find the wine
Them neon lights were bright
Till 2:00
And sneaking back home with
This girl named Jo
I hurried down to say do”
And stared my first man-child
In the eye

And now baby’s got his bellyful
And finally here’s that new bicycle
Working, praying, June to June
And mama’s got LA gleaming
In her eye

And we got by
Lord knows we got by

You see how Jarreau puts you right there, on the bus beside him. This story leads to a powerfully moving scat-song passage rippling with his highly-charged rhythmic phrasing and soulfully trumpeting high baritone.

The song “Susan” sounds like the sweet essence of his first love, herself and his irrepressible passion and tenderness for her.

“You Don’t See Me,” from the same debut album, is one of his first demonstrations of his extraordinary vocal elasticity, which he would explore in even more challenging settings such as his adaptation of Dave Brubeck’s famous rhythmic juggernaut “Blue Rondo à la Turk,” written in an 11/8 time signature.

Jarreau’s third album, Look to the Rainbow, demonstrated brilliantly his total command of live performance as it was a two-album set recorded live during a European tour. The doubled length allowed him to stretch out and show his jazz chops, especially the uncanny ability to mimic most any instruments.

He probably never reached any such extended heights on subsequent recordings, as he consistently conceded to his natural instincts toward R&B, and its inherent formulas, and to contemporary overproduction. However, jazz was never far away, as he demonstrated on his Grammy-winning Heaven and Earth in a fairly sublime two-part reading of the Miles Davis-Bill Evans classic “Blue in Green.” with his own original lyrics rendered with fine concision and an allusion to John Coltrane’s, A Love Supreme, then a medium-up tempo recasting of the brooding tune, which somehow worked superbly.

Personally speaking, Al’s death the other day was a real kick in the gut for me, because I had been thinking about him lately and about the sad fact that I had never seen him live. I moved to Madison in 1989 and stayed there for nearly 20 years working at The Capital Times, so I missed this reunion concerts in Milwaukee.

But I thought it would be great to see him before it was too late so I had sent the message just a few days earlier to Lynn Lucius, who does much of the booking of jazz and more creative music for the Sharon Lynne Wilson Center. I suggested that somebody like her should book Al again. She recounted the last couple times he was here and what a kind gentleman he was offstage.

I explained to Lynn that several years ago, I decided that if I ever did a radio show again, I would use Jarreau’s “We Got By” as my theme song. That’s because Al understood the meaning and value of one’s roots and expressed it so well in that song, and I figured I would do record a program that blended jazz and roots musics.

One way to remember him now is to visit the exhibit Melodies and Memories: 200 Years of Milwaukee Music at the Milwaukee County Historical Society, 910 N. Old World Third Street, running through April 29 (continue reading below information box): 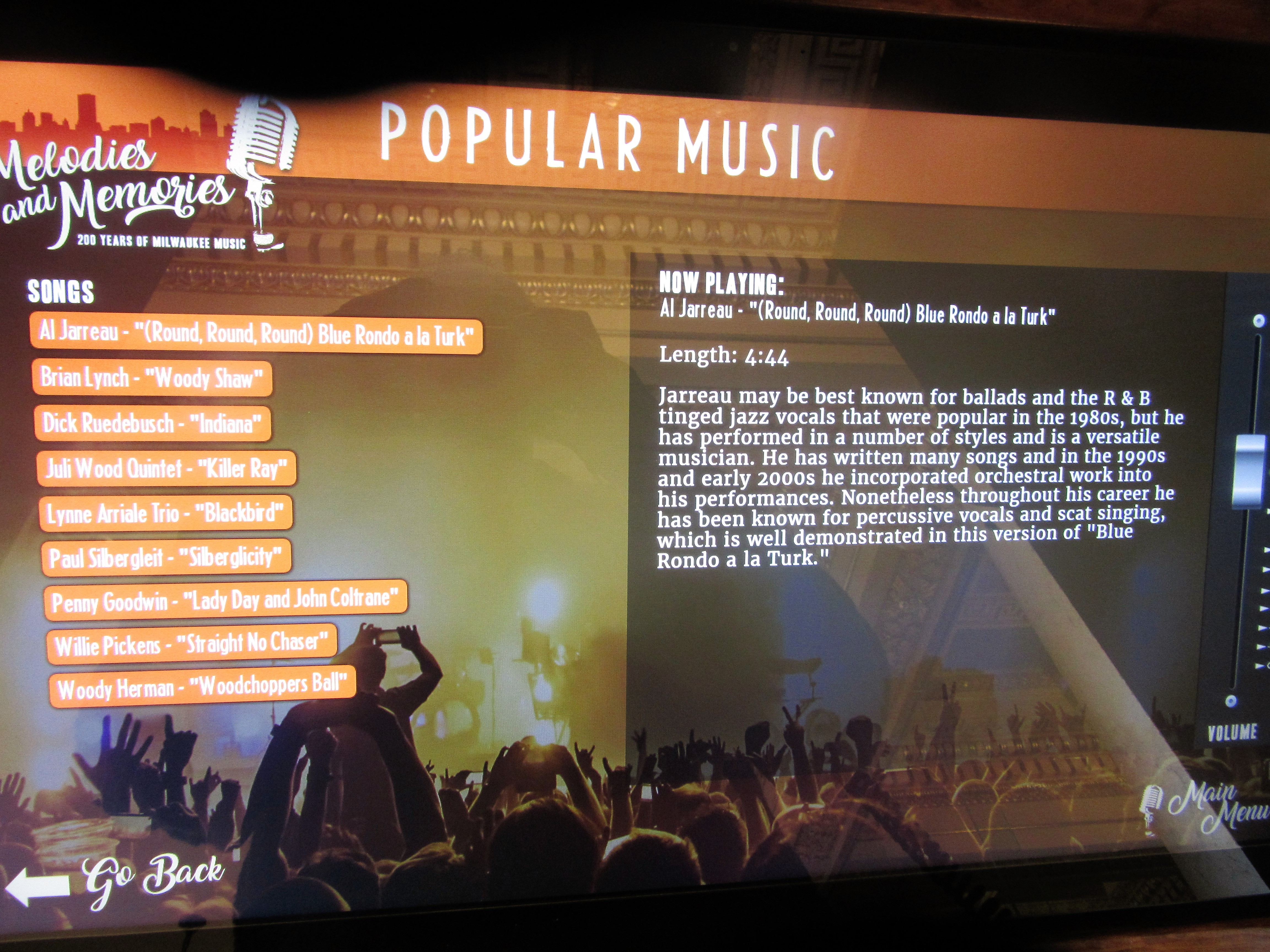 This interactive listening stand at the exhibit “Melodies and Memories” allows you to listen to songs by various Milwaukee-native musicians including Al Jarreau. Photo by Kevin Lynch

Along with Liberace, Al Jarreau is the most famous singer to emerge from Milwaukee. His music will always help us get by, and then some.