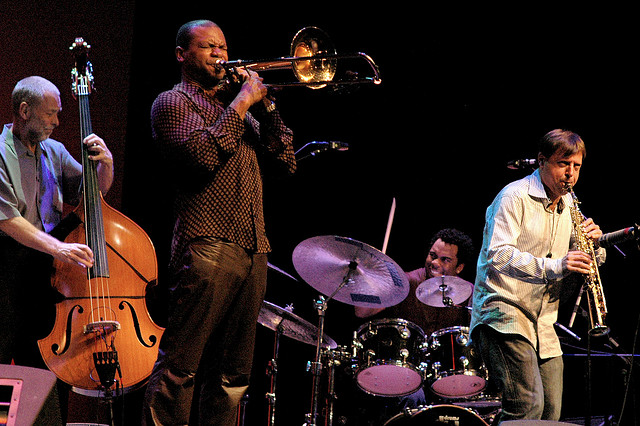 Dave Holland (left) has led a group of master improvisors and communicators in his quintet for years. Here is Robin Eubanks on trombone, Nate Smith on drums, and Chris Potter on soprano sax, performing at the Montreal Jazz Festival in 2011.

And it seems overdue, akin to Wayne Shorter finally winning a Grammy Lifetime Achievement Award this year, which might not be as high an award in jazz, but the Grammy is a bit glitzier and, of course, Shorter is deeply deserving.

Other 2017 Jazz Master Award winners recognized for their lifetime achievements and exceptional contributions to the advancement of jazz include vocalist Dee Dee Bridgewater, critic and author Ira Gitler, keyboardist Dick Hyman and organist Dr. Lonnie Smith. Each will receive a $25,000 award from the National Endowment for the Arts, and will be honored at a tribute concert on Monday, April 3, 2017, produced in collaboration with the Kennedy Center.

Below is a bit more from the press release from Braithwaite & Katz Communications, an excellent promotional company for many independent jazz and creative musicians.

Then I will offer my own thoughts on and experience with Holland, by excerpting two passages from my forthcoming book Voices in the River: The Jazz Message to Democracy.

The first passage from the book is a brief anecdote of my interacting with Holland between sets at the Milwaukee Jazz Gallery. The second is a longer critical assessment of Holland, from the books final Chapter, FREEDOM JAZZ: I GOT A WITNESS, CAN WE GET A CONSENSUS? Or, MEETING OF MANY MINDS, A CAUCUS OF SOULS .

The renowned bassist/composer and bandleader Dave Holland is also visiting artist-in-residence at the New England Conservatory.

Over the course of a nearly five-decade career, Holland has never stopped evolving, reinventing his concept and approach with each new project while constantly honing his instantly identifiable voice. From the electric whirlwind of Miles Davis’Bitches Brew-era band to the elegant flamenco of his collaboration with Spanish guitar legend Pepe Habichuela; accompanying the great vocalist Betty Carter in her last years to forging a new sound with the pioneering avant-garde quartet Circle alongside Chick Corea, Anthony Braxton, and Barry Altschul; standing alongside legends like Stan Getz, Hank Jones, Roy Haynes, and Sam Rivers to providing early opportunities to now-leading players like Chris Potter, Kevin and Robin Eubanks, or Steve Coleman; Dave Holland has been at the forefront of jazz in many of its forms since his earliest days. 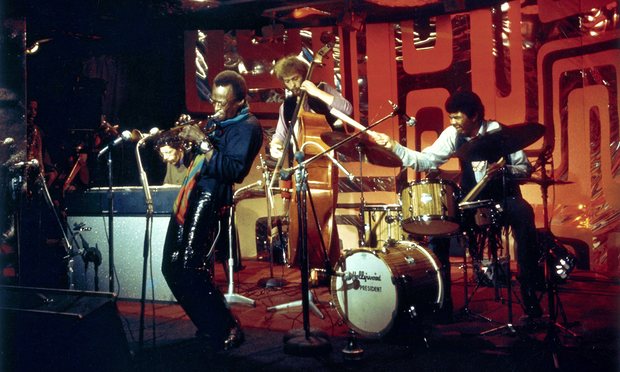 Bassist Dave Holland performs here with the legendary trumpeter Miles Davis and drummer Jack DeJohnette the British jazz club Ronnie Scott’s. Miles encouraged Dave Holland to follow him to New York when he heard him at the Soho venue in 1968. Photograph: David Redfern/Redferns

Excerpts from Voices in the River: The Jazz Message to Democracy

Chuck LaPaglia, the owner of the Miwaukee Jazz Gallery in the late ’70s and early ’80s, is discussing the dynamics of his club, a central catalyst of the city’s surprisingly vital jazz scene at the time:

“I think there’s a different sort of rapport than happens between the audience and the musicians,” LaPaglia explained at the time. “It has happened here, I’ve seen it. The audience gets warmer and warmer as the night goes on, and I think the music improves.”

For that matter, it was the kind of place where, on a night I wasn’t working, I’d step up to hang in LaPaglia’s apartment between sets and find myself sharing a joint with the brilliant bassist Dave Holland (one night I wasn’t reviewing a Jazz Gallery event for The Milwaukee Journal). How could Holland play such demanding music under the influence? The answer, it appeared, was that he took small, calibrated hits.

From Voices in the River: The Jazz Message to Democracy,

Chapter 16 FREEDOM JAZZ: I GOT A WITNESS, CAN WE GET A CONSENSUS? Or, MEETING OF MANY MINDS, A CAUCUS OF SOULS:

I will examine two albums that demonstrate and signify how contemporary jazz correlates to the democratic process as an act of interactive consensual process, the Dave Holland Quintet and group of pianist Myra Melford who, like this book, sees the process as partaking in the inexorable power of rivers.

The Holland Quintet is a virtual consensus choice of critics and fans in recent years as the finest jazz group in the world.

Their acclaimed 2001 album directly declares that this music is Not for Nothin’, the CD’s title. 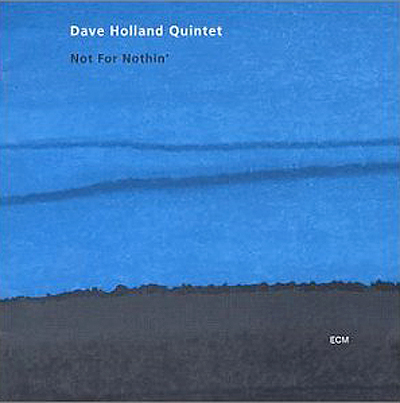 If it is for something, bandleader-bassist Holland begins to make it clear from the very first tune, which is titled “Global Citizen.”

I offer a few thoughts about the interpretation of wordless music. Yes, the following description is an interpretation open to debate. But we must concede that if the group titles the piece “Global Citizen” and that jazz musicians so often say they play music to “say” something, to speak their piece. (It’s significant that all of the pieces on this album are written by members of this group, a not common phenomenon in contemporary jazz and in interactive types of rock jam band music, which borrows heavily from the manner and spirit of jazz (Hip hop does as well with rhyming words added.).

The tune “Global Citizen” is open to meaningful interpretation. The band plays in a minor key but with a growing sense of excitement and purpose, articulating musical thoughts and feelings imbued with the hard questions and tough relativism of their time. Much of contemporary jazz plays in, or orients itself to, minor keys and dissonant-laden harmonies. Here, however, each rhetorical statement unfolds in a citizen-like manner, whether at the end of a solo, a chorus or in restating the theme in quickly ascending phrases that seem to say “What about you?,” or “Why not?” or “Whaddya think?”

The complex solos each encounter pithy interjections from the group, as if reminding the speaker of the theme or point at hand, and each time rising to a slightly higher level of discourse. Then all musicians fall silent to hear out the sage-sounding bass voice of leader Holland. The similarly quiet-tempered voice of the trombone ensues in a mature spirit of thoughtfulness.

The point is that effective, communicative form and interactive process leads to constructive inspiration – new ideas that no one may have imagined before, that everyone appears to agree on, at least conditionally.

This is true dialog. It is even more dramatic in the ensuing tunes “For All You Are” and especially “Lost and Found” which seem to be about losing one’s way and finding it again, through determination and open-mindedness. This is what happens in the democratic spirited discussion that allows free input from any voices, even the most fringe or eccentric.  In “Lost and Found” the group’s interaction becomes so animated, intense, and excited as to be palpable, to the last note which is a long held note by the alto saxophonist, which seems to say yes, we have reached a conclusion, the debate and discussion is resolved for now.

This is “free” jazz for the new millennium. 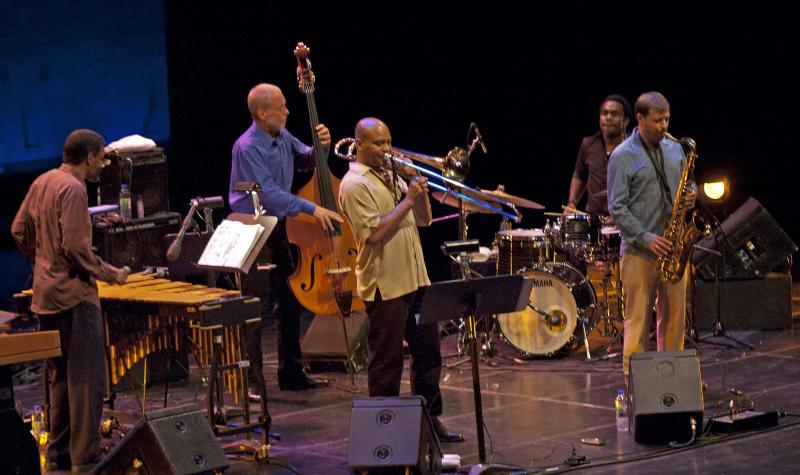 “Dave leaves everybody a great deal of freedom to express themselves,” the band’s vibist Steve Nelson (at left, above) told Down Beat’s Howard Mandel. Dec 2002 p 32 “The music is demanding because we have so much freedom. As in a lot of improvised music, there’s a blueprint but around that a million things can happen. I never know what direction Dave, Robin, Billy and Chris are going to go, so I have to keep listening.” (“Dave leaves everybody”: Howard Mandel, Down Beat, December, 2002. p. 32.)

Listening is the key to true dialog and achieving consensus, perhaps in achieving a nation, in the striking phrase of Malcolm X, known for the seemingly uncompromising slogan “by any means necessary,” revealed that one important means was listening closely to others, to get past bluster or rhetoric.

Jazz listening, response and interaction are more a model and inspiration than an example, which more literal and literary art forms provide.

But the powerful collective human voice of jazz is unmistakable, throughout the Dave Holland Quintet’s recordings and countless other instances of jazz, be it serious or joyous, blues-laced or ecstatic, ironic or idealistic.

“Not for Nothin’ ” CD cover from allmusic.com.