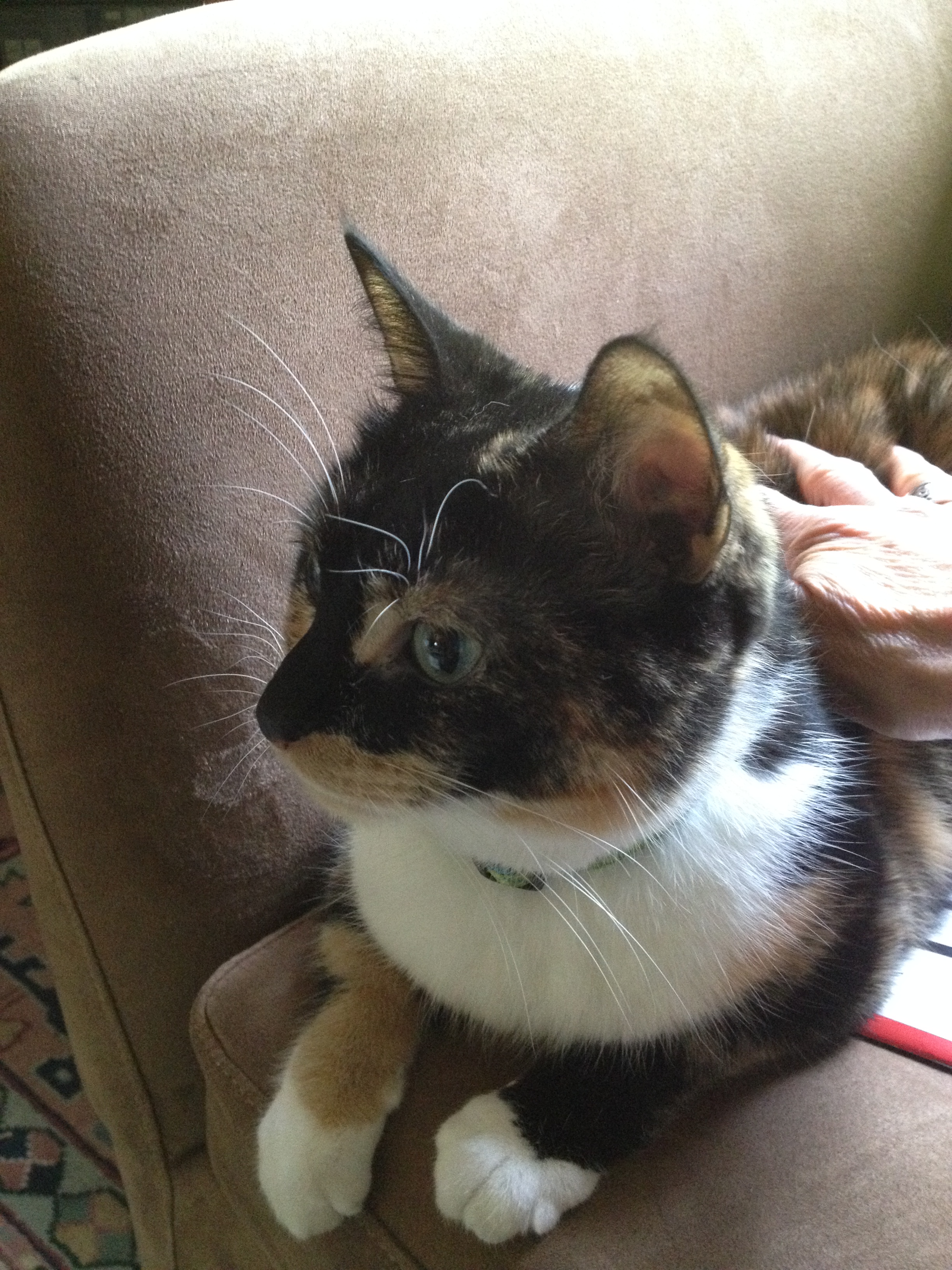 Ahem…Introducing my readers and friends to…ta da!… Queen Cleopat — er, Chloe.  Well, you see,  I’m still getting used to talking to her, which begins with properly addressing her. I’m not on bended knee, yet.

But I did call her “Cleo” already by mistake. Worse, at this point I call her Maggie more often than Cleo, after 11 years of living with my previous dearly departing cat, Maggie (a.k.a. Magpie, Poopface, Super-Duper Pooper).  As you’ll soon see, Her highness Chloe has some slightly eccentric preferences, as long as you don’t think your consideration is among them. A dog’s world is: “Me, meat and you, dear master.” A cat’s world is: “Me, myself and tithes, my servant!”

But she also has ways of ingratiating one’s best service. And she’s a natural charmer for the camera, whereas my dear neurotic Maggie actually became wary of the clicking shutter. But now, it’s hard not to get a good photo of gorgeous Chloe the calico cat. She’s sort of my “soul sister” as I think you’ll see in her face (though I dare not say that in her presence, yet). So forgive me if I overdo it a bit with the pictures here.

Without further ado, I will proceed with the introducing-you-to-Chloe photo essay, with appropriate captions. . 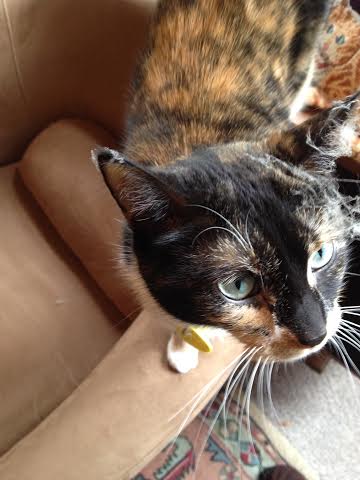 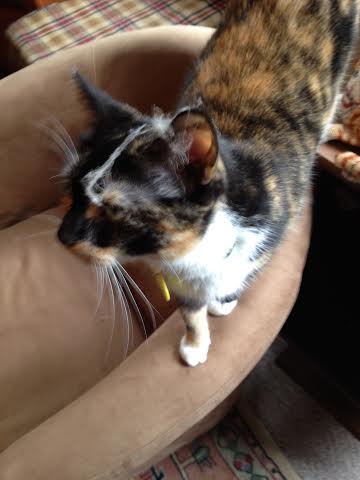 Unfortunately, lovely as she is, Chloe sometimes is too busy nosing into dusty corners to always put her absolute best face on for the camera, as was the case in these two early close-ups of her — after she had just spent some time rooting around in the basement. She came up with dust goobers on her left ear and forehead. She’s very exploratory and somewhat fearless, so I’ll have to keep my eye on her, Note to self: Assign her personal secret service agents. 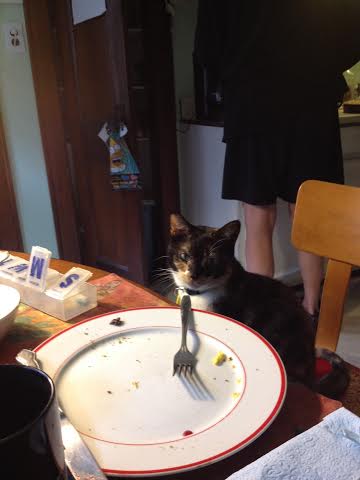 Chloe’s a serious chow hound, er, cat. I’m trying to resist giving her table scraps but with a pretty puss like hers…it’s just a matter of time. Here she was, behind my back so who knows how much she wolfed down, er, ate? When she gets her squishy canned Fancy Feast she does tend to wolf it. “You’re a cat, Chloe. Don’t wolf you food,” I say.

She’ll glance at me with a withering glare.

“Your Highness, that is! Seconds?” 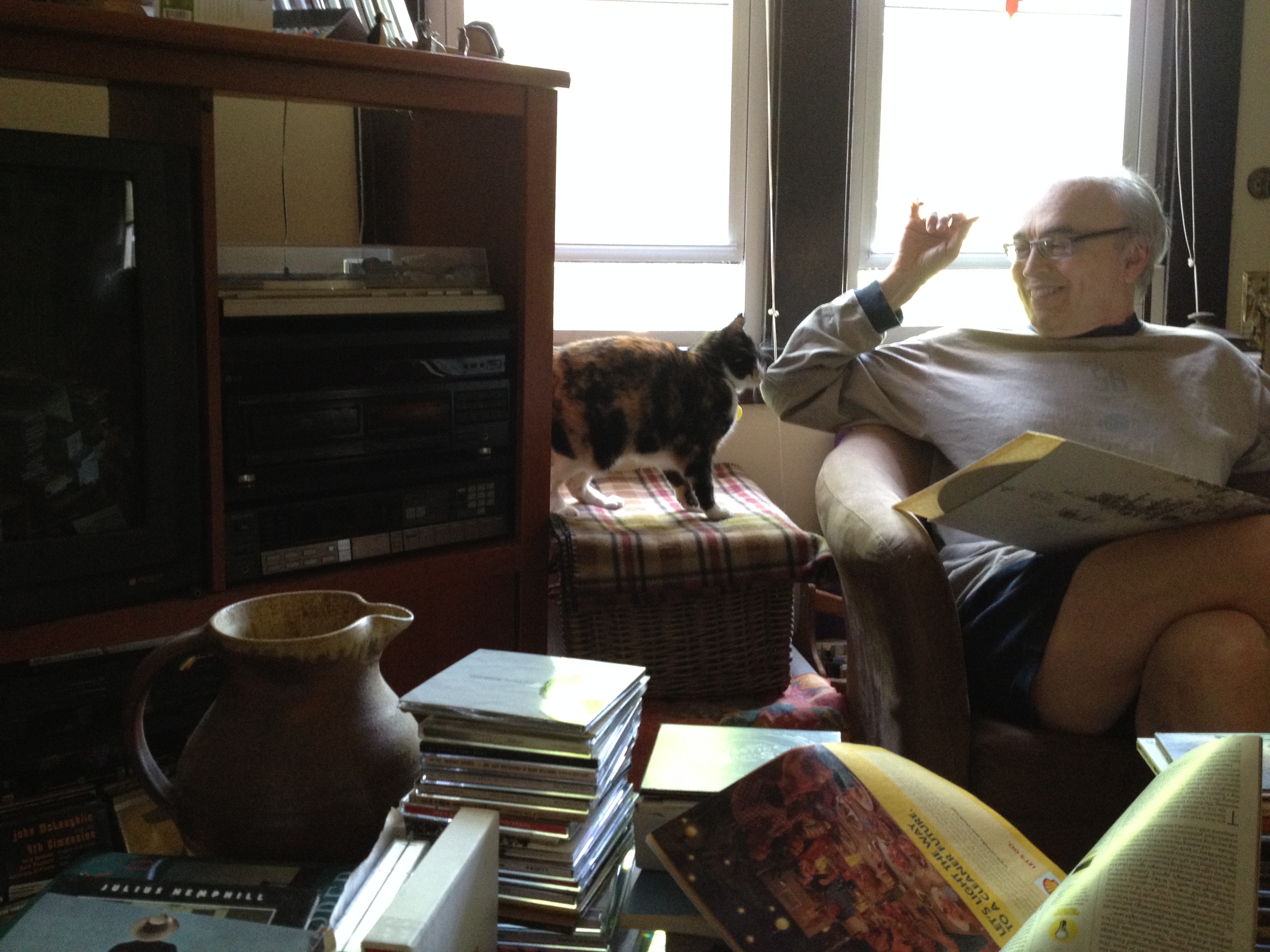 Here she is, sizing up her subject (moi), deciding whether she’ll keep me. I offer a tentative petting hand for her pleasure… 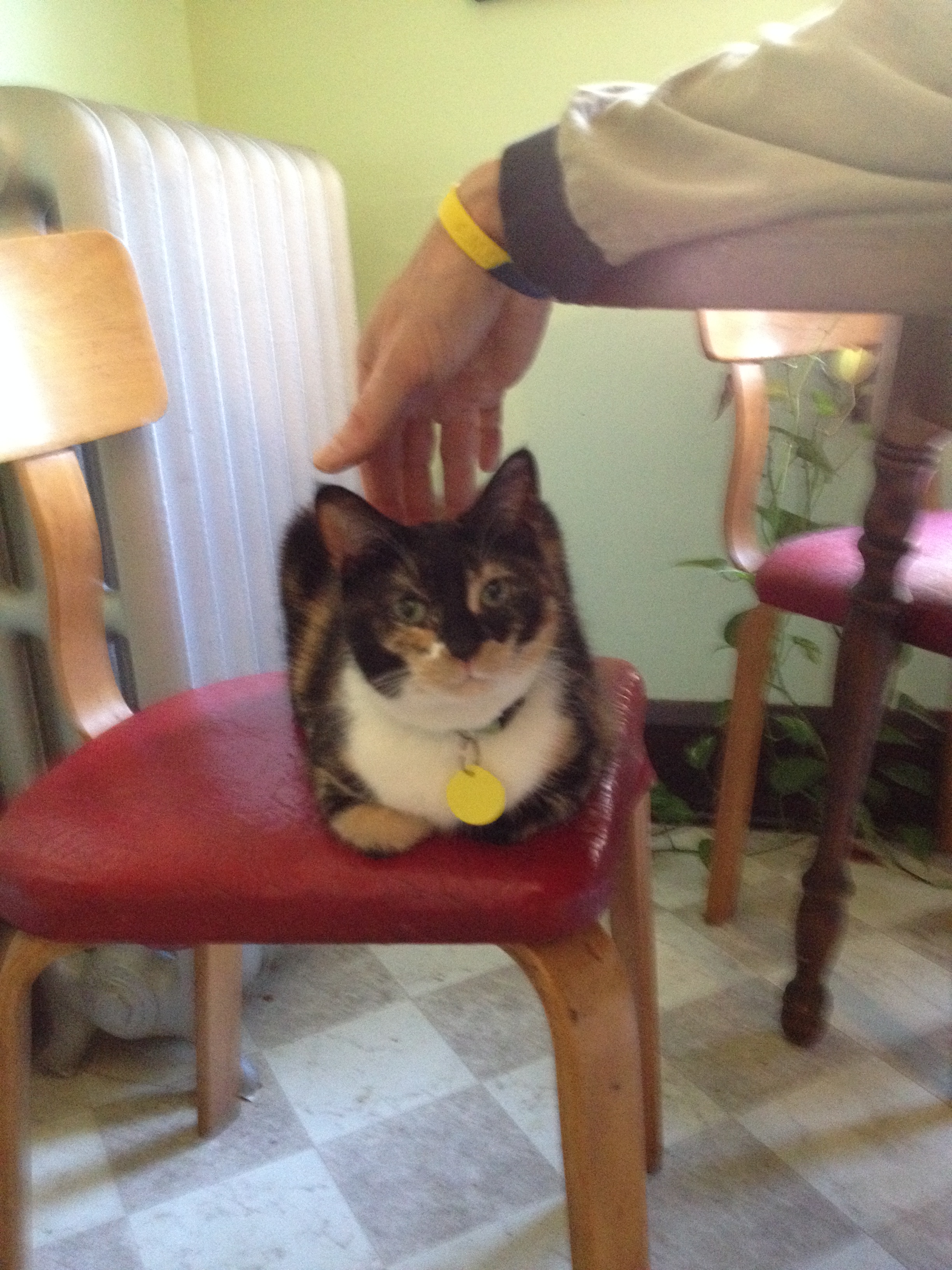 I start with fingers to the neck, a slight nuzzling stroke and slowly work my way to the relative royal intimacy of a full palm massaging of her upper body. “Hmmmm, yes, I believe he’ll do, for now…But what sort of a name is Kevernacular?” 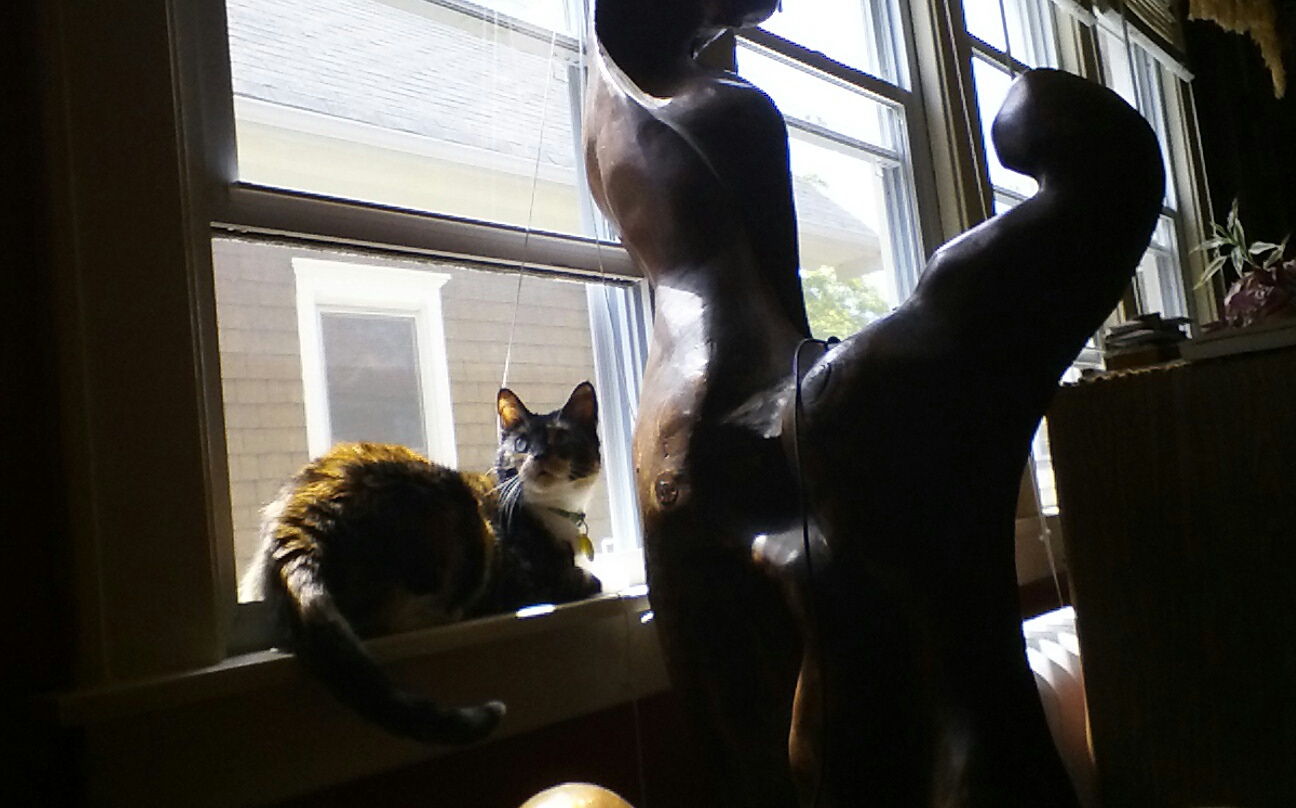 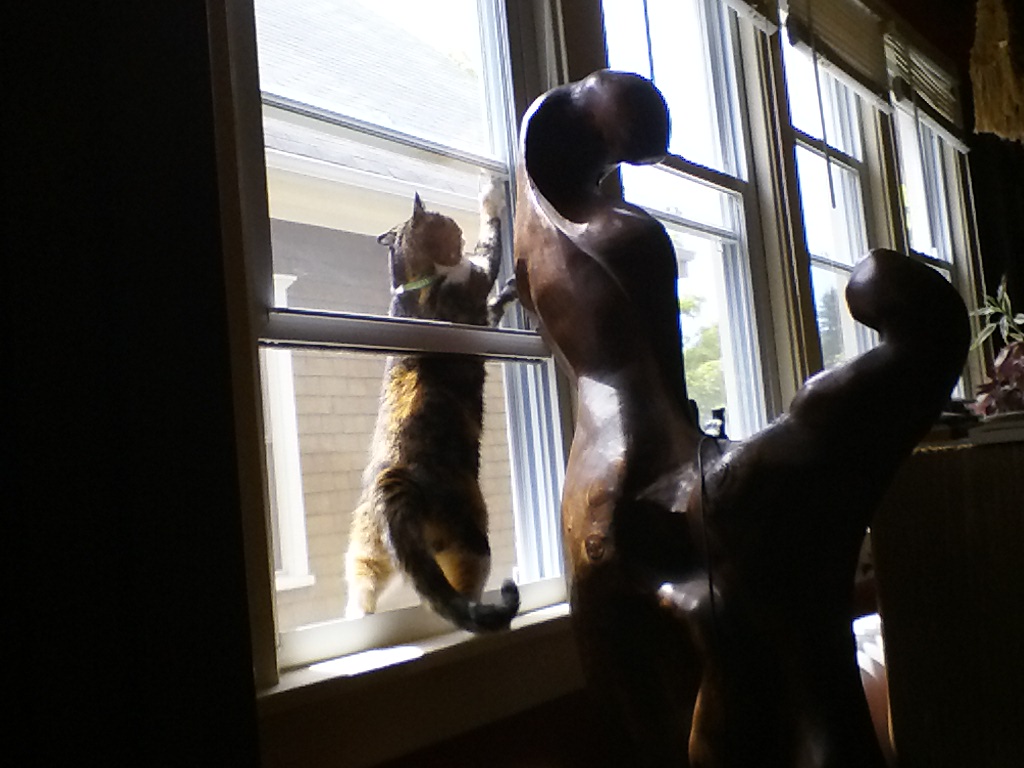 …But she’s far more than just a porcelain-pretty kitty. Here she springs into action, pursuing a real (or imagined) bug by squeezing herself into the one-and-half-inch-wide space between the window screen and the window frame. Maggie would never have dreamed of trying a stunt like this. BTW The wood sculpture is “Chained Life Force” by Kevin Lynch (Kevernacular). 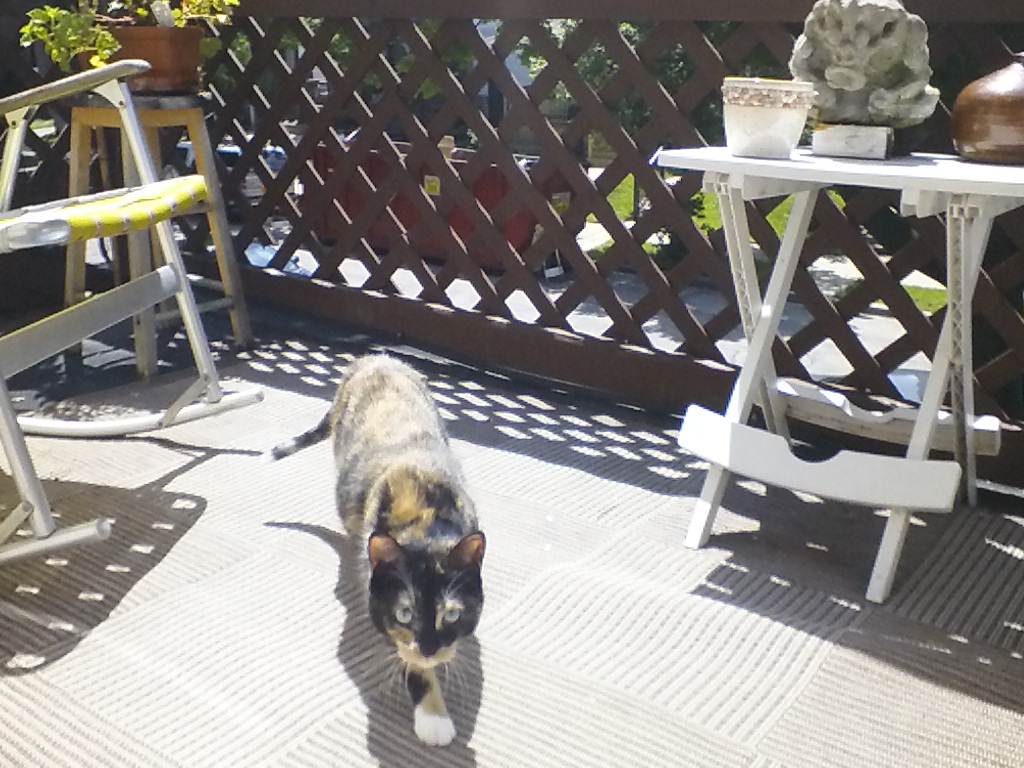 Queen Chloe really likes basking in the balcony sun, but the flora and fauna soon get her dreaming of the wilds of the jungle. Before long, she is prowling around, doing her best “caged panther” routine. At least she seems to strike terror in the heart of my concrete gargoyle! 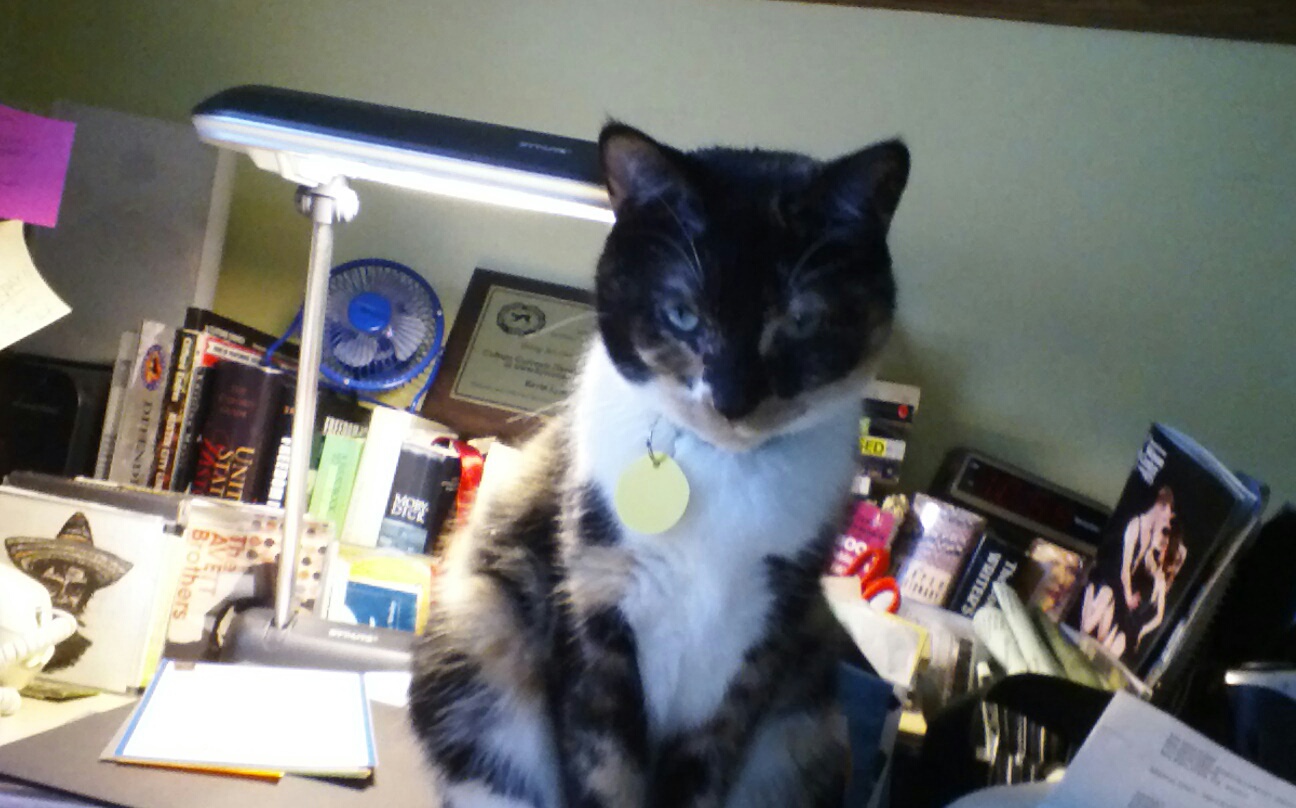 Chloe decides to try out my office desk. She measures the space and the clutter… 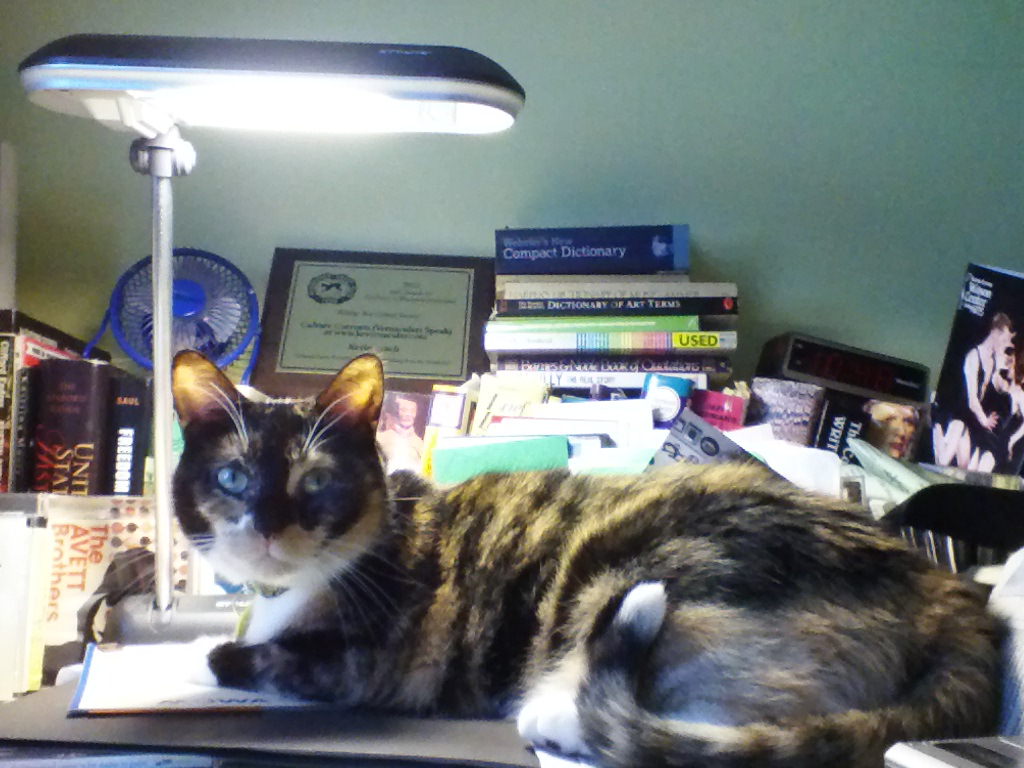 …and decides it suits her just fine, to my great relief. 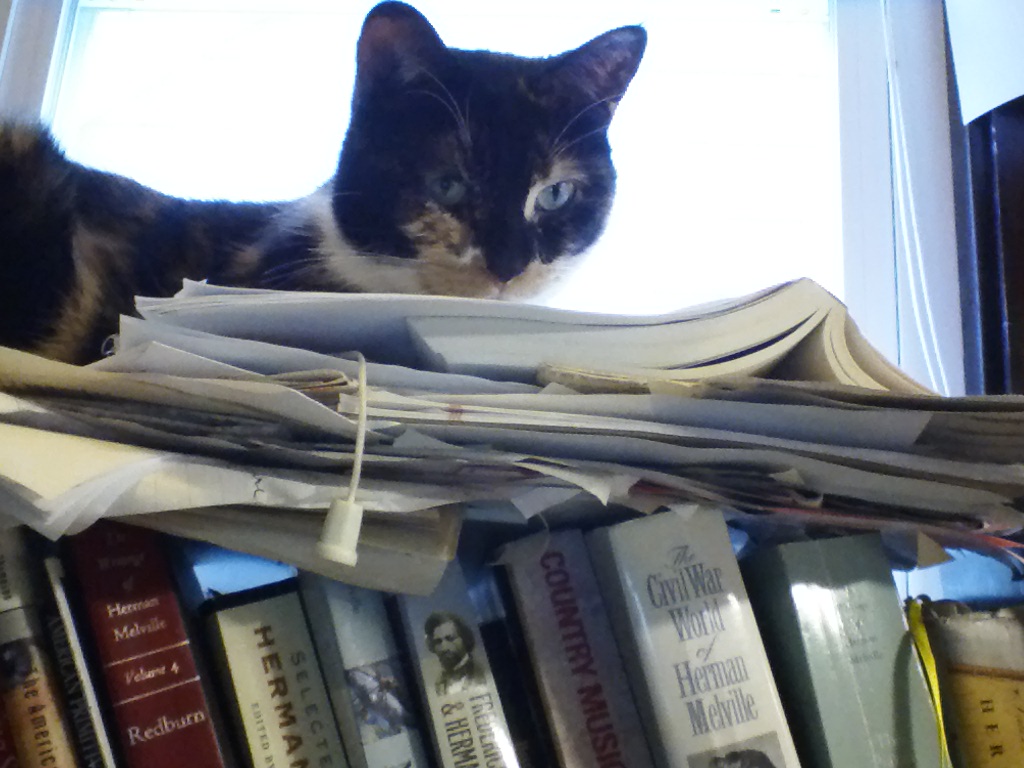 …before long she realizes in that position she is too subject to my inadvertent elbowing, not to mention the ongoing clutter of papers, books, CDs and pens… So she decides to relocate to my messy “inbox” above my desktop computer’s keyboard. Here she takes on a new and greatly valued role as my sharp-penned editor in, among other things, my quest to complete my novel about Melville. Soon I may need to fit her with reading glasses. 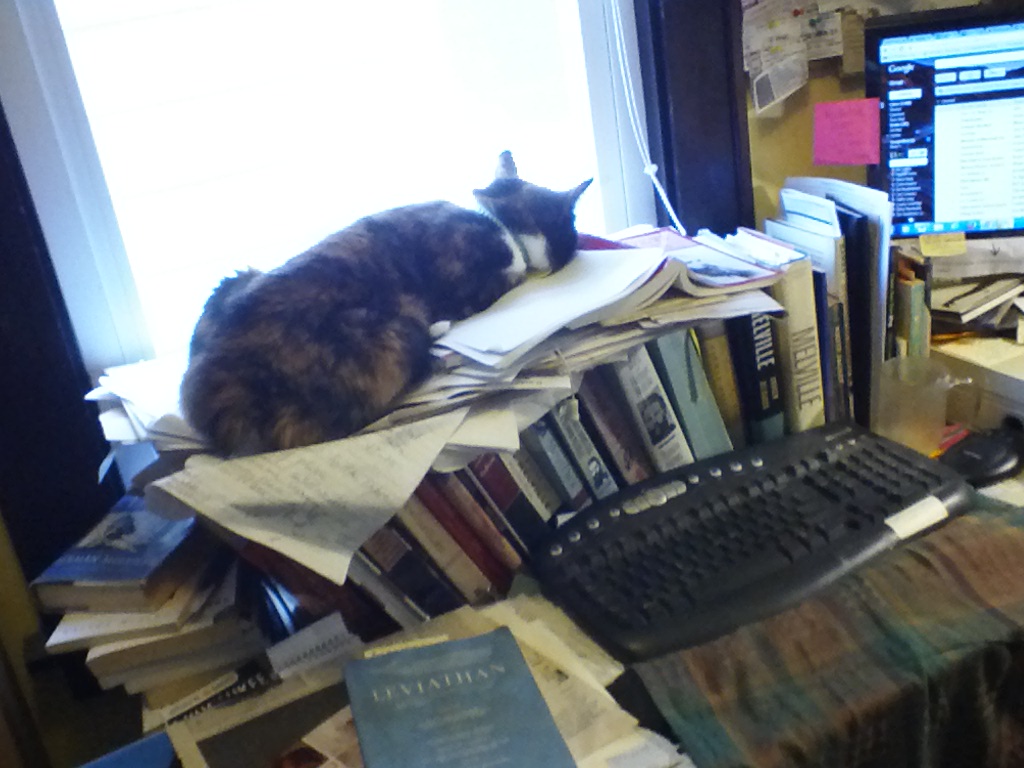 But any truly royal Kitty soon tires of the lonely pursuits of the the literary life. 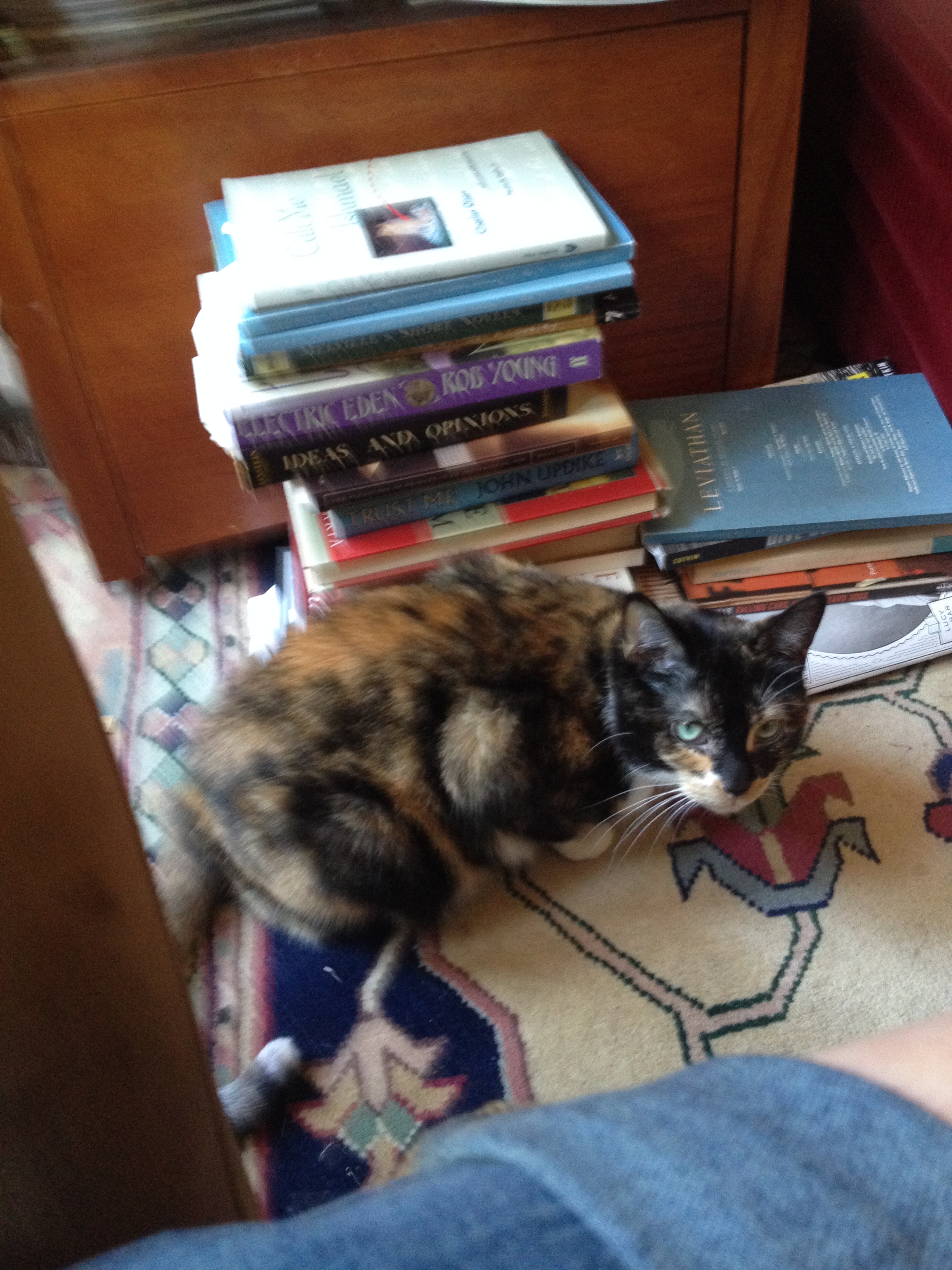 I push my luck by suggesting some good reading material for her. “Ach, it’s just a bunch of ideas and opinions,” she sniffs. “Did that Einstein fellow have any good theories about  perfecting the ultimate squishy cat food? Huh?” Photo by Ann Peterson 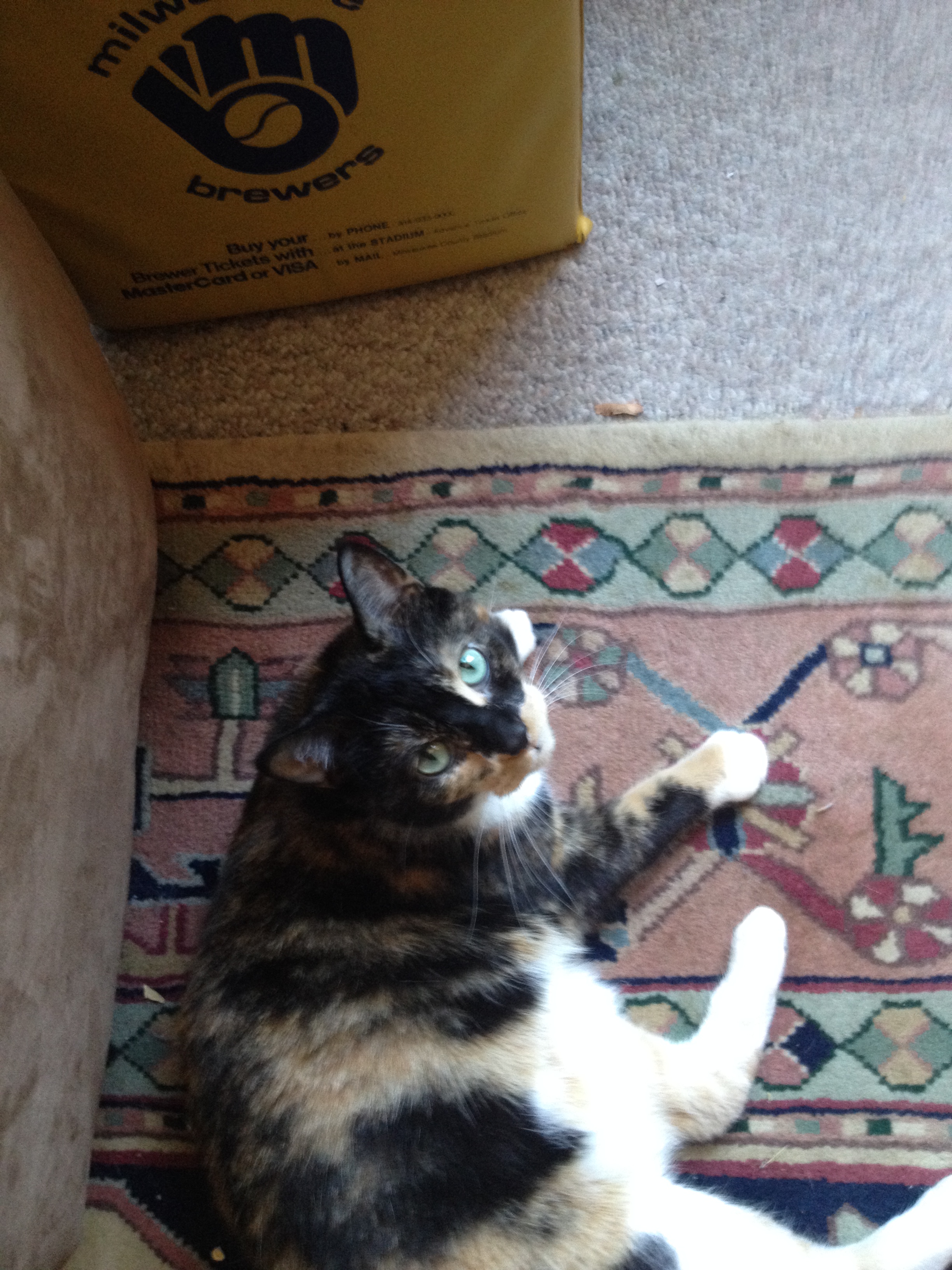 “I’d much rather you take me out to the old ballgame,” she persists. “You can have the beer but I’d gladly try the hot dogs and brats. I especially like biting into dogs and, then, not having to run.” Photo by Ann Peterson 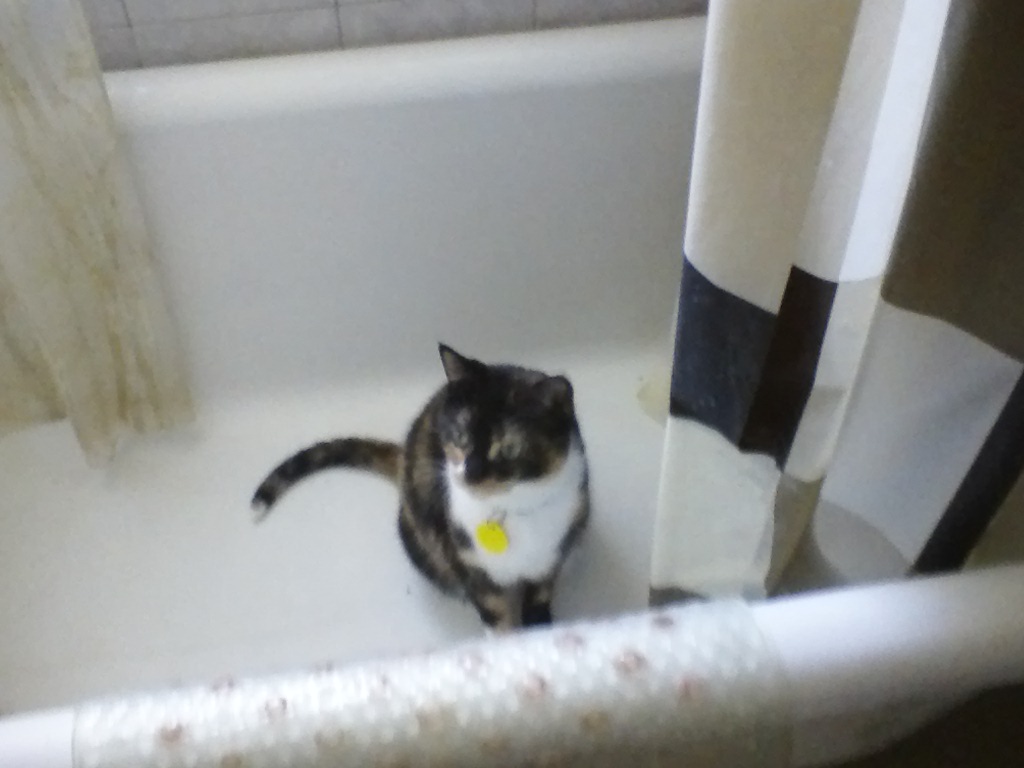 Then at the end of the day, another faux pas by yours truly: “Why has my bubble bath not been drawn?!!” the queen cries. “Off with his head!” (…I know the sleazy tabloid video cameras will be rolling for this, she thinks, [Sigh] ‘Tis a queen’s burden. I must keep the peasants and riff-raff entertained every blue moon, or they get surly and start grumbling about filthy streets and other weary rubbish…)

“What’s that? Let them eat cake, as long as they leave me an offering of squishy Fancy Feast. I stole that ‘cake’ line from that French hussy who stole my Antony, in a time warp, I’m told… I have not yet begun to fight.  I stole that line from, um..yes, one of those hot-headed American revolutionaries. Remind me to hang onto my court historian, the next time I purge the ranks of useless hangers-on and boot-lickers, though I do like some schmoozers, when I’m in the mood.” 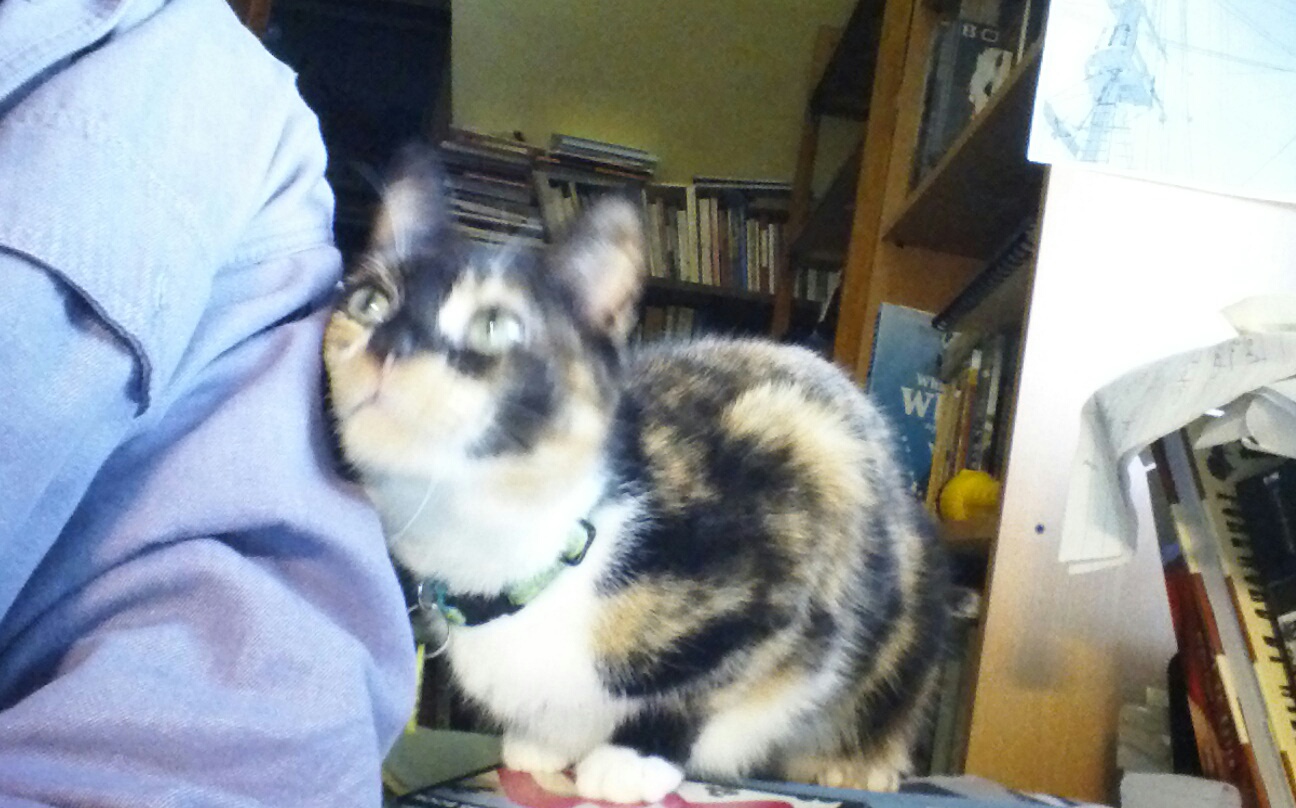 Well, it seemed like a trial under fire, a harrowing gauntlet, for me to gain the queen’s approval and trust, when suddenly she leapt up to the desk and…Fast friends!…so it seems. 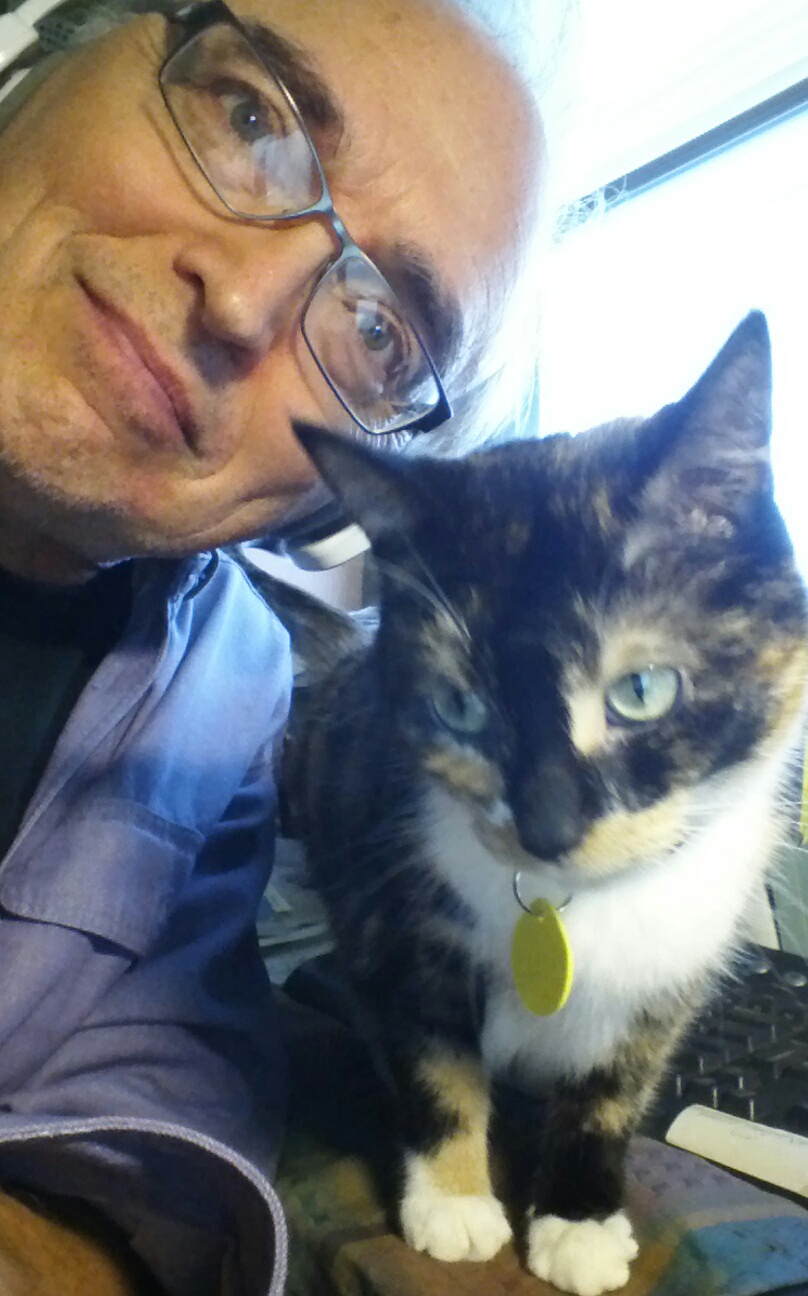 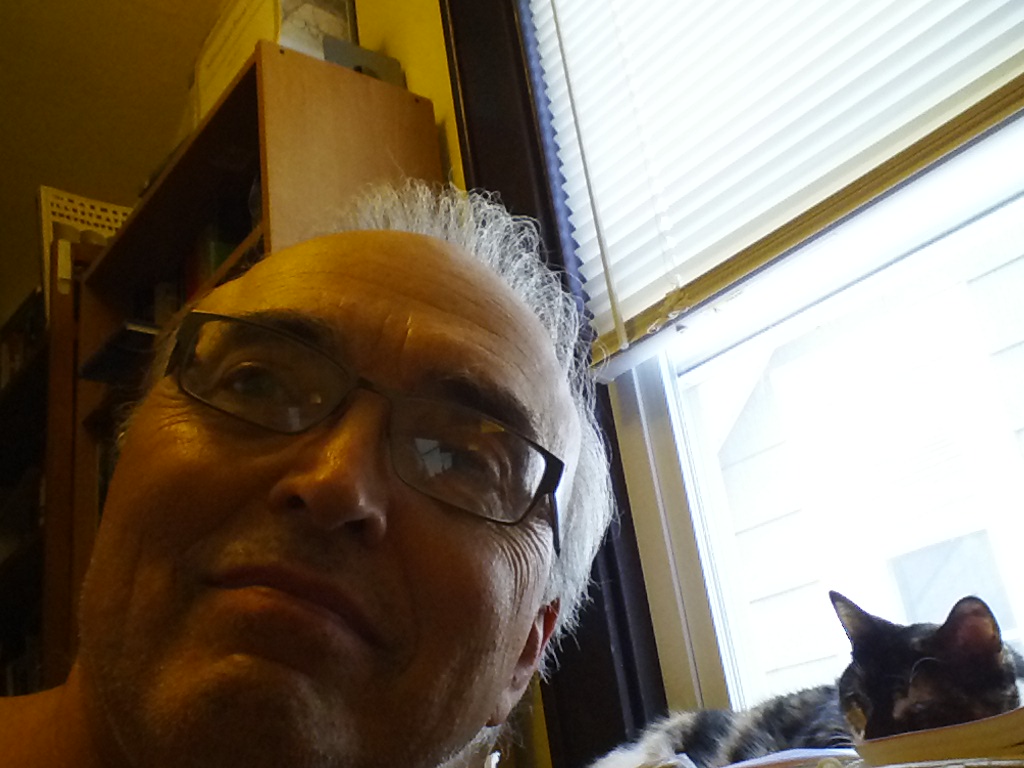 Ah, but the afternoon light grows dim, and a queen’s royal duties can take their toll on her regal brow. Her eyelids grow heavy. Shhhh.