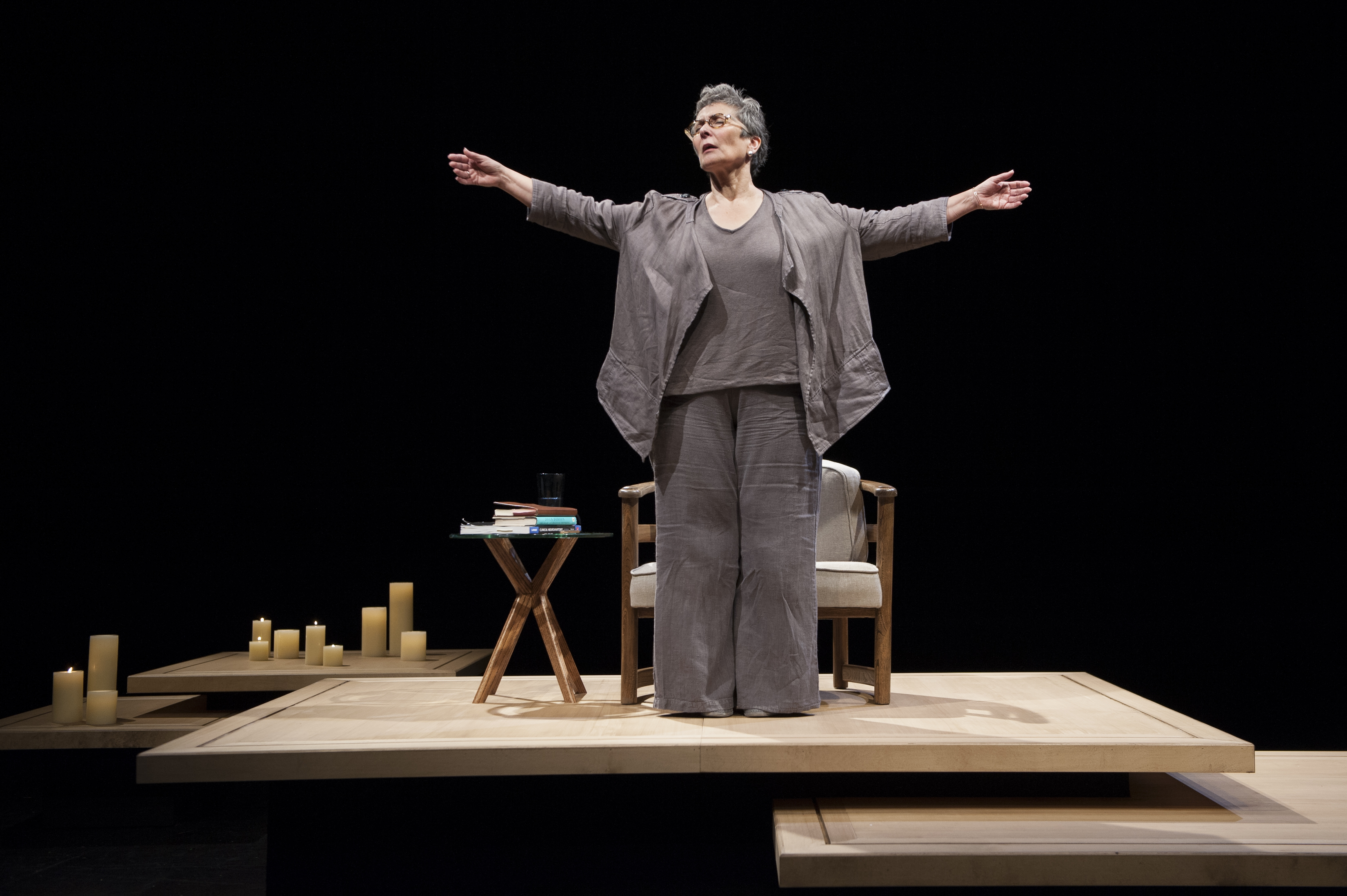 The audience laughed at, “You know when they assign you a social worker you’re in trouble.” But  the humor often hangs uneasily in American Players Theatre’s staging of Joan Didion’s adaptation of her riveting memoir of death, suffering, mental surreality and “magical thinking.”

On the night before New Year’s Eve in 2003, noted author John Gregory Dunne died from a fatal dining-room table coronary, while sitting across from Didion, his spouse and partner of nearly 40 years. The title phrase is Didion’s term for her wishful striving to save him and, somewhat less improbably, to save her only child, Quintana — in extended intensive care for septic shock  from flu-related pneumonia in both lungs, contracted a week before her father’s death.  “You sit down to dinner and life as you know it ends.” One’s tempted to keep quoting Didion, a lapidary phrase turner.

And despite the difficult subject and at times, searing intensity, it’s an exquisite pleasure to hear one of the Midwest’s finest actors, APT’s Core Company member Sara Day, handle the entire script. This one-woman show is, at times, breathtaking, with no dramatic theatrical effects: a small two-level stage garlanded with a few flickering candles, a non-descript waiting room-type chair, an end table and book.

The power derives from Day’s skills and attunement. She often bores her intense gaze right into the audience. You feel she’s handing you her bared soul, showing you how trauma and grief make might make you crazy, a theme of the story. Didion’s stage adaptation cuts back on her book’s obsessive poring through records and arcane medical books, but Day conveys the woman’s self-aware mental surreality. Dunne’s dead, and she returns from ER, and “blood and the EKG electrodes are still on the floor.” 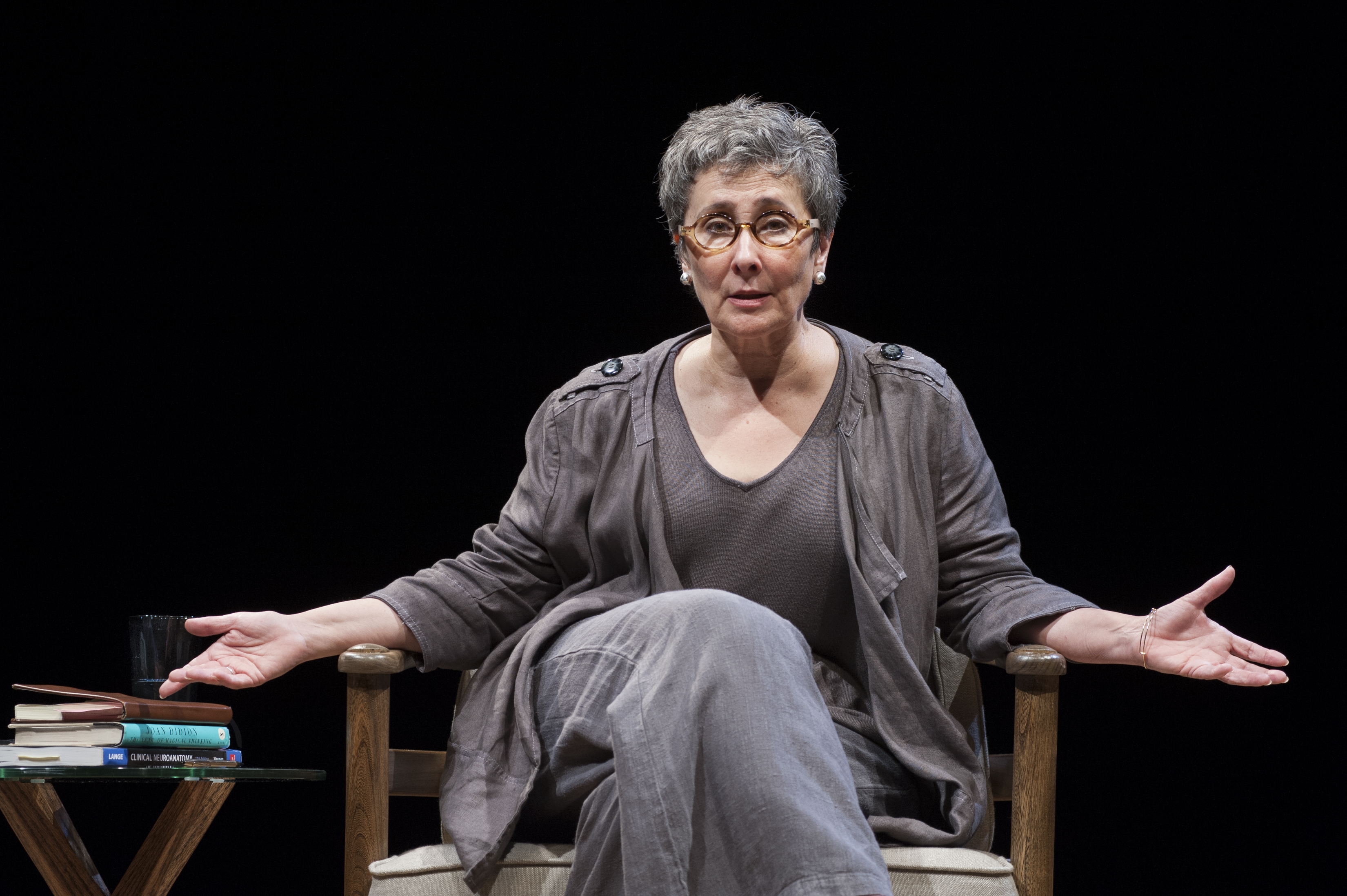 Such details trigger the desperate detective in her who, if she can just piece together enough information, might just resurrect him or save Quintana. Her denial fuels her quest, especially potent in pursuit of Quintana’s recovery. The newlywed had fallen sick on Christmas Eve 2003, placed in an induced coma and life support.

Day’s virtuosity fascinates, myriad nuanced gestures and emotions, on the brink of “the void.” The play breathes, through deft pacing, with director Brenda DeVita’s able collaboration. Day often pauses or strolls around her chair and ponders silently. In one superb moment, she suddenly asks the audience, “Do you remember when I told you I got her a bracelet like this one?”

The long pause — her wrist raised in the air — is clarity, and her farewell to magic and Camelot.

Quintana Roo Dunne died in 2004, after this story’s end.

The Year of Magical Thinking runs through Oct. 4 in Spring Green in APT’s indoor Touchstone Theater. For tickets, visit www.americanplayers.org.

This review was first published in The Shepherd Express.