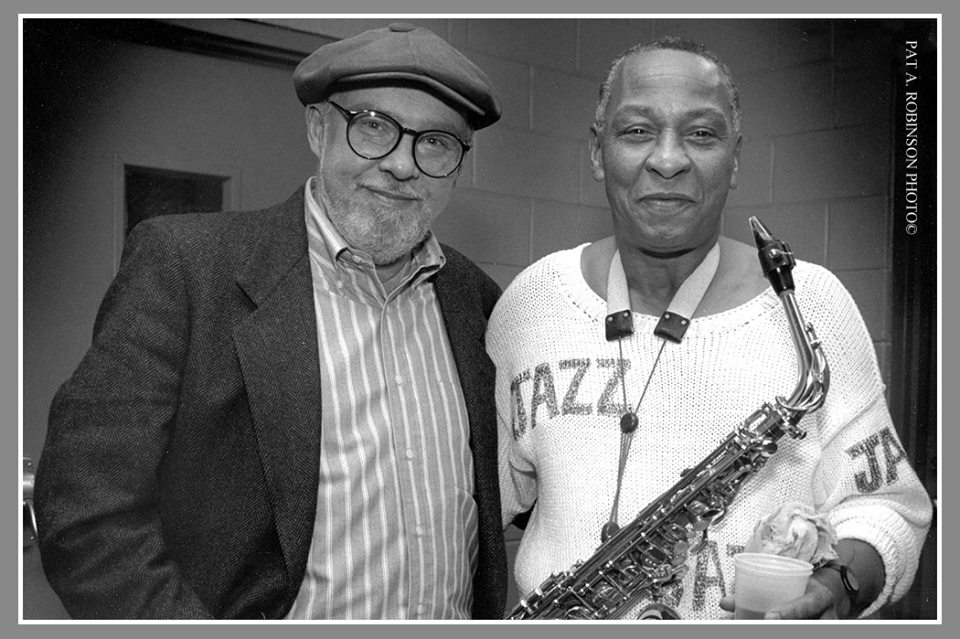 Ron Cuzner (left), an active champion of the local jazz scene, greets saxophonist Frank Morgan, who spent much of his early performing years in Milwaukee and returned to play at the original Milwaukee jazz gallery and other area venues. Photo  (ca. 1990s) courtesy Pat Robinson.

Although most people appreciated the high and discerning quality of the straight-ahead jazz he played — except perhaps some advocating for more avant-garde music — there was a distinct difference of opinion on his one-of-a-kind announcing style.

I wanted to reproduce at least two of these comments along with my responses to them because they are from two people whom respect. The first, a recent e-mail exchange which combines intimations of dissent with humor, is from Mitar Covic, who was better known as Mitch Covic when he played bass for a number of Milwaukee-area jazz groups and bandleaders in the 1970s, including Buddy Montgomery, Berkeley Fudge and What on Earth?
Covic relocated to Chicago shortly after this collaborative efforts with Chuck LaPaglia at the Jazz Gallery when it opened in the late 1970s .

The second message was taken from the comments section of my Culture Currents blog, and written by Mike Drew, a long-time Milwaukee journalist. Drew covered jazz for The Milwaukee Journal in the 1970s and perhaps the 1960s. In the late 1970s, the Milwaukee television and radio beat became large enough that Drew took it over as a full-time job. This left the responsibilities of covering the revitalized Milwaukee jazz scene to first, Bill Milkowski (a noted jazz journalist and author now based in New York), and then myself. Drew still writes about jazz as a freelancer. 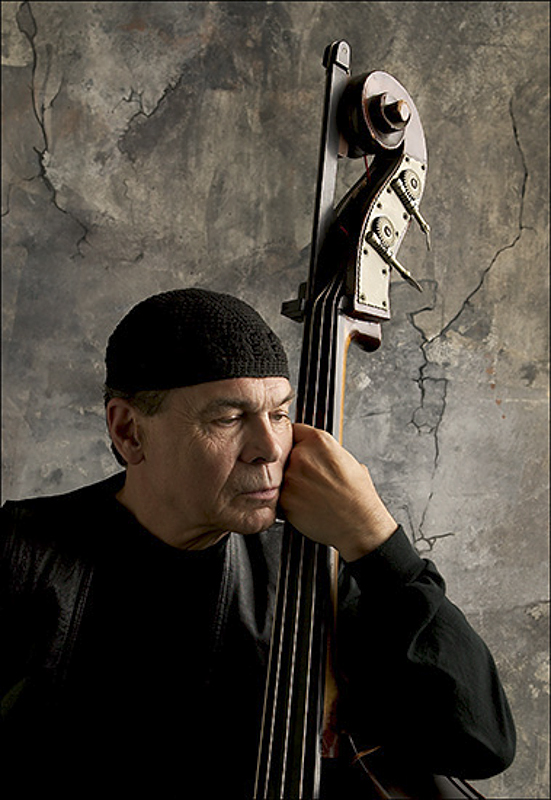 Thanks for the Cuzner reminder. Of course I was a listener if not always a fan of his style.

And we had a volatile contretemps over my relationship with Chuck and the Jazz Gallery (I remind you that I lived in the upstairs apartment and shared the kitchen table with the likes of Barry Harris, Nat Adderley, Lee Konitz, and even a “bath” w. Sonny Stitt when he thought he had opened the door down to the club but fell into the tub with me……(we had to dry him out in both senses of the term). — Mitar

Mitar,
Thanks for the anecdote. I’m doing a follow-up blog, collecting some musicians’ responses to the first piece. May I use yours? I think I recall you alluding to differences you may have had with Cuzner. This adds nice color to my little story.
I remember sharing a toke once with Chuck and Dave Holland upstairs. However, I was not working that night. I had reviewed Holland the night before.
You weren’t really a business partner, right?
Best,
KL
Kevster:
I was (not) a co-founder; that was all Chuck’s idea and capital. He cashed out a pension policy and sold his 30 foot sailboat to fund the place.
A couple of years later, when the club was in financial difficulties,  Cuzner put in a sizable chunk of money. I’m not clear what the deal consisted of, or even if there was a formal contract. You need to go to Chuck for that info.
Later after years in the Bay area Chuck returned to Chicago but became reclusive, and he has been off my radar for many a year now, including what state he resides in.
Plus he’s pushing 80 years now, so move fast. You might also ask him why the El Rukn gang from Chicago shot up the 2nd floor windows of the Gallery. Also I have a great Barry Harris anecdote, one I reminded him of when I saw him play a couple of years ago here in town. — Mitar
I reproduced Covic’s response to my last query so it is very clear that Chuck LaPaglia founded the Milwaukee Jazz Gallery on his own financial resources and initiative. Yet the venue was a community-oriented concept which Mitar Covic contributed to. Chuck and Mitar had shared ideas about the gallery while working on programming and administrative aspects of  Century Hall, an East Side Milwaukee meeting hall and arts venue in the 1970s.
Here is Chuck LaPaglia’s response to Covic regarding Cuzner and the Jazz Gallery:
Kevin,I have been reading and enjoying your Ron Cuzner blog. Ron Cuzner was someone I listened to the entire time I was in Milwaukee. Being a late-night introvert I spent a lot of time listening to his music. Ron had the unusual ability to make the music come alive with words. During my time in Milwaukee I ran into a large number of  people who claimed that Ron introduced them to,and educated them about jazz. Ron’s show and the Wisconsin Conservatory were two pillars of Milwaukee jazz that helped convince me to open the Jazz Gallery.Although I got a lot of advice and support from Ron when I first opened the club, he never offered any financial support. I can’t imagine that  Ron would have had a “sizable chunk of money” laying around.  It is true that after a couple of years I was in financial need, and there were numbers of people who donated monies to keep the club alive. Ron wasn’t one of them.

As far as the myth about the gallery being “shot up” by a gang, the real story is as follows….One night, after the club had closed, an unusually belligerent drunk refused to leave. While I was upstairs counting the money the staff was downstairs dealing with the drunk. A friend of one of the waitresses decided to intervene and after some pushing and shoving (no punches were thrown) the drunk left the bar. About an hour later, I was upstairs relaxing with some of the staff including the waitress’s friend, when someone drove by and began shooting into the upstairs apartment. I went to the police but was never able to identify the drunk. The much maligned El Rukin gang had nothing to do with the shooting.

Mitar was an important advisor in the early years of the Gallery. He was actually living at the Gallery and was my in-house counselor. (You may remember your first interview at the Gallery involved Mitch) When you talk to Mitar let him know that even though I’m 80 years, you don’t have to move that fast to catch me. He is right about my reclusiveness, but I only rate as a semi-recluse.  I have always been a little introverted and shy, and I tend to withdraw from time to time. On the other hand my life has included intense interactions with the world. All part of being human.

Here’s the second exchange of comments.

Michelle just sent me this. Lovely, thoughtful, kind and knowing.

Makes me want to read more of you. Where can I find your stuff? Good to catch a glimpse of you the other night at Wilson Center.
Is there a review available? Your thoughts?
BTW. I was never big Cuzner fan. The music was usually fine and it was
great to have it there. I liked his taste but the style was too self-reverential and affected for me. I won lots of CDs on his name-the-artist contest, which kept me up to 1:30, but not as many as the Sentinel’s Keith Spore.
I worshipped Dave Garroway, WMAQ Chicago, for about six years in the mid and late ’40s at midnight to 1:30 a.m. I listened to most of his 1160 Club jazz too many nights in my mid to late teens. Also a stylist, but a genius. Hooked me on Sarah, Ella, Woody, etc. whom he played and then replayed, pointing out things he loved the second time around.
I wrote him once asking the value of my 78 of Bob Crosby’s The Big Noise from Winnetka.
Here was his reply to an enchanted 15 year old: “Dear Old Delicate Mike. Your precious platter is worth two lonely dollars. Oversized Alohas for those incandescent phrases. Peace, Dave.”
No wonder he made it to the “Today Show,” where he was its first, and best,
anchor.”
Peace,
MD
________

Been out of town, Mike, but thanks for reading and responding. I can’t comment on Garroway’s musical tastes having heard him only as a television personality on Today. He sounds like he was his own sort of national treasure. Giving you some wide berth to hold up Garroway as a standard, I would acknowledge Cuzner as being perhaps a peculiarly Midwestern oddity, as a personality. But he was also very good and thoughtful man with a strong vision which usually requires a certain ego, both of which were generously evident on his program.

As I grew to know the music with this great assistance, I accepted the oddities of his manner like those of a jazz soloist with an indelibly personal voice. Yes, he was self-conscious at times, perhaps proud, but I found him self-parodying as much as self-aggrandizing, because of his remarkably dry sense of humor, and the odd catch phrases, and personal anecdotes that made him into a someone you could understand and somewhat relate to — as in the anecdote about his aunt who called him “Butchie.” I related to his loneliness.

I think his style was partly his way of taking a stand for the sake of the music, of saying this is worth your attention. After all, if “Solitude” isn’t, what is? So his pregnant pauses were meant for you to open your mind up, to honor this music as you experience it as the most vital and mature indigenous art form of our own nation and people. Perhaps that sounds a little highfalutin’, but in my mind Cuzner — and especially what he contributed to Milwaukee’s culture — like a nocturnal Robin Hood of jazz, grows in stature over time rather than the reverse. — Kevin (Kevernacular)

I believe Cuzner’s rhythmically nuanced announcing style brought people back to the music, which was an art of rhythm more than anything. Many listeners may recall his opinion on “my very favorite drummer, Billy Higgins.”

Here listen to Higgins, who played with a variety of straight-ahead and more cutting-edge performers over his long career. In this live festival recording listen to Billy flesh out the dep pocket of his groove with bassist Ron Carter. Higgins did it in and in obtrusive but quite infectious style. Ron would’ve loved this: http://www.youtube.com/watch?v=NaWW6XzZq2Q