I received a number of appreciative comments and memories from musicians who read my remembrance piece on Ron Cuzner for the anniversary of his death on March 29. The response indicates how much he meant to Milwaukee-area musicians, because for over three decades Cuzner promoted and played local artists as much as could be reasonably expected of a radio host trying to present the spectrum of straight ahead jazz. And he helped promote them in a concerts on his program and record store. So here are several intriguing, wistful and amusing recollections of Cuzner.

Perhaps my favorite is this remarkable anecdote by Daron Hagen, a renowned Milwaukee composer and 2012 Guggenheim Fellow who is known especially for his operas, such as “Shining Brow,” based on the most dramatic and tragic period of innovative architect Frank Lloyd Wright’s life. More recently, Daron gained widespread acclaim for his opera “Amelia,” the epic story of a pregnant young woman who In barks on an odyssey to gain understanding about her relationship to Navy pilot father who died in the Vietnam war.

“Cuzner was my partner in insomnia for years growing up in Milwaukee. Will never forget that soothing, knowledgeable voice, or his eclectic, always-superb taste in music. One night, working the register in an all-night “White Hen Pantry” convenience store in Brookfield, I remember, all alone, around four in the morning, freaking out when a crazy-looking dude walked in and began pulling stuff randomly off the shelves. I was playing WFMR. On came Cuzner’s soothing voice. I swear, the guy just dropped everything, sat down in the aisle, and began listening to him. A half hour later, when the police came by for donuts and coffee, he was still there. They asked him to get up and go. He left, peaceably, and smiled at me on the way out.”

Evidently the serenity and sublime energy of “The Dark Side” spoke mysteriously to the potentially dangerous stranger. Back then, and increasingly in retrospect, Cuzner’s somber opening theme song, “Solitude” by Duke Ellington, was a profound and timeless expression of humanity for the forsaken, the troubled or the lonely sorts of people haunting “Nighthawks,” Edward Hopper’s famous painting of sleepless city dwellers in an all-night coffee shop. I believe Cuzner understood all this as well as Ellington or Hopper. 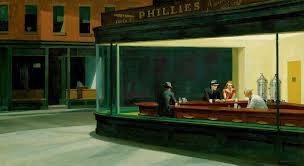 Edward Hopper’s famous 1942 painting “Nighthawks,” from in the collection of The Art Institute of Chicago. Courtesy shadeone.com.

And yet, several musicians also cherish Cuzner’s dry and eccentric wit. Although the Racine-born Cuzner was a devoted Chicago Cubs fan, he had slyly subversive attitude towards sports. This emerged in his peculiar way of announcing baseball scores during his required news reports.

He would often say something like, “In sports today, Milwaukee defeated Toronto, New York defeated Boston, St. Louis defeated Cincinnati, Los Angeles defeated San Francisco… and my beloved Chicago Cubs lost to Pittsburgh. The scores were five to one, seven to six, three to two, eight to four and nine to six.” It was up to the listener to figure out the precise connections between the teams and in the scores.

“When Cuzner was on the air at WZMF, I had a got a third-shift job as a desk clerk at a sleazy motel on Fond du Lac Avenue.  My job coincidentally had me work every hour that Cuz was on the air. I purchased an FM radio to take to work. So I heard every minute of every show for the entire year that I worked there. That must have been around 1960 or 68.  I had nobody to talk to because I worked alone. So did Ron, so I’d call him up and we’d talk almost every night.  Cuz was into Charles Lloyd that year and played the live Forest Flower album and Planet Earth by Cannonball Adderley often.  Some nights it was funky organ players all night.”

Cuzner was also eager to share his passion and knowledge of jazz with any fan who was interested. On the Ron Cuzner Facebook Page, John Doerge recalls “When Ron ran his jazz store in the early 1990s he gave me this list of basic jazz recordings that everyone should know.”

Doerge poasted a scan of the list Cuzner gave him, with the DJ’s markings on it. It would appear Cuzner used the libray as a set ‘s checklist for his show. 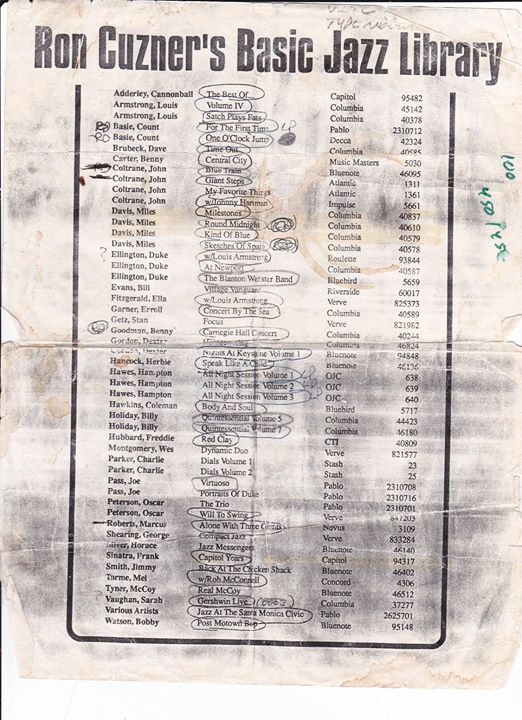 There are many other recollections and artifacts about Cuzner on the Facebook page as well as podcasts of his radio broadcasts, organized by Al Jewer. https://www.facebook.com/pages/Ron-Cuzner/97979281464 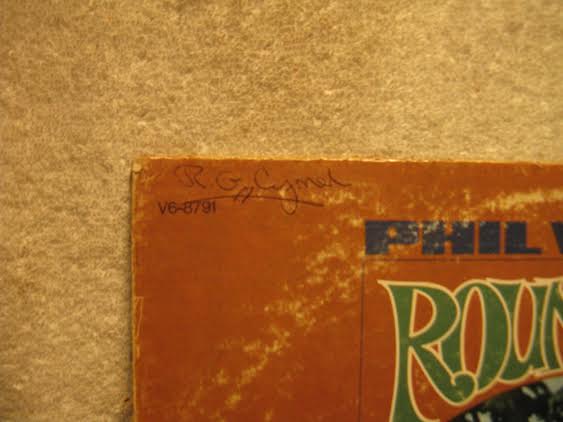 i Ron Cuzner signed his name to as many of his thousands of LPs and CDs as possible, Here’s his signature on the Phil Woods album “Roundup.” Courtesy Steve Cohen

Blues harmonica player, guitarist, singer and scholar Steve Cohen also buys and sells vintage, collectible long-playing albums. “A batch that I recently bought had Ron’s name on the back of the jacket of one of them,” Cohen says. “That was inspiring.” The LP, by alto saxophonist Phil Woods titled “Roundup” (see photo detail), includes Cuzner’s signature on both the front and the back of the album, illustrating his almost obsessive concern with putting his name on as many of his thousands of albums and CDs as possible, perhaps fearing a robbery during the long, nighttime hours of his program “The Dark Side.”

“Also I was on the WAMI ((Wisconsin Area Music Industry) Board of Directors a few years back,” Cohen says. “Through the efforts of the board, we were able to give Ron a Hall of Fame award, just shortly before he passed away. It was very gratifying to see him get some recognition. He was so important to so many of us.”