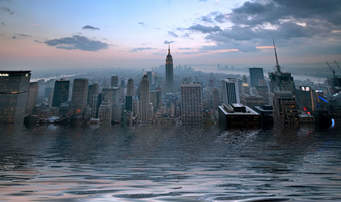 This is a digital projection but major coastal cities will be vulnerable to major floods if climate change continues apace and unchecked, says Bill McKibben. courtesy neatorama.com

Right now, World War III rages across the globe. And while the US President whistles through the battlefield like a world-class fool, even all those nations who agreed to the Paris Accord aren’t doing enough. That’s the dire warning of Bill McKibben’s deeply knowledgeable and far-reaching jeremiad from 2016 which grows more urgent and relevant each passing week, literally.

“Enemy forces have seized huge swaths of territory; with each passing week, another 22,000 square miles of Arctic ice disappears. ” he writes. “Experts dispatched to the battlefield in July saw little cause for hope, especially since this siege is one of the oldest fronts in the war. ‘In 30 years, the area has shrunk approximately by half,” said a scientist who examined the onslaught. “There doesn’t seem anything able to stop this.’”

McKibben notes that the gargantuan enemy isn’t angry at us, or otherwise emotionally or psychologically motivated, which can lead to mistakes, like Hitler’s many in WWII, or would likely happen to Kim Jong Un, if the North Korean dictator tries to use a nuclear weapon.

Rather, McKibbon notes, the enemy is indifferent, just as Nature was in Moby-Dick, our greatest American parable, among other things. Except Nature is now on a tsunami roll, far more destructive than it ever was in the mid-1800s, when Melville published his book. 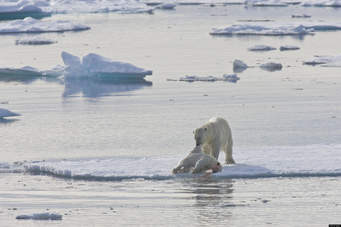 The natural environment of Arctic wildlife disappears at a catastrophic rate week after week. The implications for the earth and civilization are staggering. Courtesy Huffington Post.com

Worse, North America’s corporate and governmental technological efforts are going in the wrong direction, as the massive oil spill of the new Keystone pipeline in North Dakota recently showed. One the eve of the decision to grant final approval to build the pipeline, it’s almost as if Nature – in the form of 210,000 gallons of gushing crude oil – sent a very pointed, and sprawling, message. Here’s a New York Times report on the spill:https://www.nytimes.com/2017/11/17/us/keystone-pipeline-transcanada-leak.html

McKibben has been our greatest scholar, writer and activist on environmental crisis for a long time and remains at the peak of his powers. 1 He was one of Bernie Sanders’ primary civilian expert consultants for his presidential race, when Sanders accurately declared climate change was the greatest threat to the world.

“World War III” is McKibben’s term, but he says we can still win the war but only if we mobilize in the way that is comparable, to an exponential degree, to our belatedly successful technological manufacturing response in the face of Nazi Germany virtually swallowing up all of Europe. Except now, most major nations will need to do the same.

Back home, even coal miners and their champions need to read this article and understand that the change necessary will only benefit coal miners, in terms of financial security and personal safety. The only constant in life is change, the truth we must all face up to once again. Now that the season of catastrophic weather –- hurricanes and hellish wildfires of unprecedented magnitude – we need to marshall our forces with clean, renewable energy production, which will also create thousands of new jobs. Even if there is a seasonal ebb and flow, natural catastrophes will only worsen if we don’t do something ambitious – aimed at the big, harrowing picture, at the long, serious, precipitous haul. 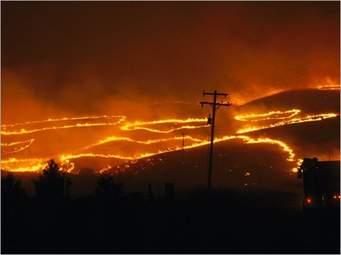 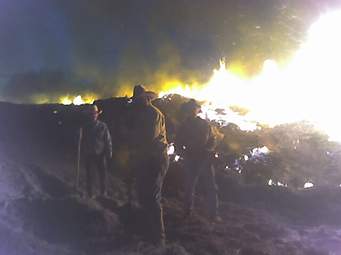 Please don’t judge the war by my introductory words. But take Bill McKibben very seriously because he knows more about this than virtually anyone. McKibben is not an environmental extremist; he is an environmental realist  And he writes a very compelling story, full of historical and scientific perspective.

And this war is not a metaphor. It’s as real as Hurricane Harvey. As real as death. McKibben’s article is very readable, but a long one, only because we need some substance to get to the truth of a global war.

Here is McKibben’s story: A World at War