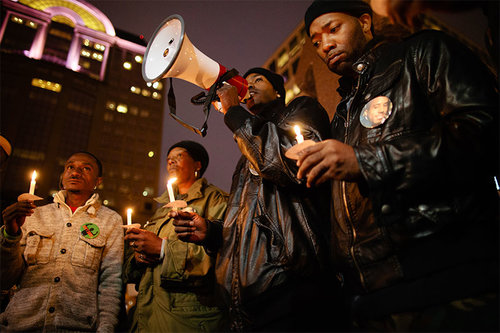 A candlelight vigil held in Red Arrow Park in Milwaukee for the late Dontre Hamilton, held by his family and other mourners and activists. Photo by Jennifer Johnson.

It was a pleasant surprise to run into my former colleague, Madison-based  writer and critic Rob Thomas, with whom I worked at The Capital Times for a number of years, before returning to my hometown of Milwaukee in 2009.

I was also heartened that Rob cared enough to travel to Milwaukee to cover the film we were both attending, Blood is at the Doorstep. So I am offering a link to his excellent report on the film, which in its Milwaukee debut was a bonafide event, with a post-screening onstage talk-back with the film director in attendance as well as important members of the late Dontre Hamilton’s family, who provide much of the film’s soul and substance.

As a fine film critic, Thomas is well aware that this film transcends, reaches beyond Milwaukee, while being an inextricable product of the city’s lacerated heart. As he points out in his article, Blood has already made waves throughout the country, having been shown at a number of film festivals including the prestigious SXSW film festival in Austin. It has also gained an independent distributor, and filmmaker Eric Ljung hopes it will have a continuing tour into 2018. I want to consider why this is important but I also want to focus on the film’s quality and effectiveness.

The film has a conventional, straightforward linear narrative, like most documentaries. It details how a Milwaukee police officer, Christopher Manney, approached the sleeping African-American Dontre Hamilton, even though other officers had inspected him earlier in the day and determined he was a threat to no one.

This tragic moment should never have happened for several other reasons.

Manney’s record reveals that he amounted to more of a threat to the community than a safeguard. The film, three years in the making, reveals he had already been guilty of more than a dozen instances of excessive use of force, as well as a sexual assault charge. So in retrospect, it’s unsurprising that when Manney confronted the sleeping young black man, he put his hands on him. The groggy Hamilton reacted instinctively by grabbing Manney’s threatening billy club.

A witness to the altercation says that neither Manney nor Hamilton landed a blow with the club. Nevertheless, Manney then pulled out his handgun and shot Hamilton 14 times, as he lay on the blanket he had been sleeping on. Talk about living and dying a nightmare.

Later, district attorney John Chisholm says, in a tortured decision, he determined there was no criminal intent because, whether or not a blow was landed, the policeman’s club in Hamilton’s hand posed a threat. Thus, the district attorney’s reasoning is that somehow Manney was justified in his slaughter even though Hamilton never struck Manney.

Objectively speaking, Chisholm should probably have not been ruling on this case because he works closely with MPD as public prosecutor. So he can hardly be judged a politically impartial investigator. This built-in conflict of interest in city justice systems is just beginning to be addressed across the nation, partly because of the preponderance of virtually all policemen being absolved of guilt in cold-blooded shootings of unarmed black men, time and time again.

Another reason this never should’ve happened was the poor community relations that Milwaukee Police Department has with the people it is sworn to protect. A recent independent report has thoroughly documented this problem. So in this instance, we see police chief Ed Flynn, who comes off in the film as arrogant and self-serving, rolling his eyes and even ignoring the public as he sits before them at one hearing, while he stares at his cell phone. He says he was keeping track of a new murder case. If anyone needed Flynn’s consultation about that matter, one can assume they would have contacted him. Flynn also defensively profiled Hamilton as homeless and as an armed robber, neither of which was true. The dead man did suffer from a mental disease, perhaps schizophrenia.

And it is clear that officer Manney failed to follow police department protocol in approaching a citizen. He ended up being fired for not following police procedure, but the department  ignored the possible first-degree murder charge. This allowed Manney to appeal his firing as “wrongful.” Manney himself claims that he saw a bulge in a pants pocket of the sleeping Hamilton, which the cop said might have been a gun or a shard of broken glass that might be a potential weapon.

No such weapon existed, merely Manney’s lame, lethal excuse. And because the district attorney absolved him of any responsibility for the man he killed, the officer ended up receiving 75% of his pay for the rest of his life, in effect living off the fat of city taxpayers as a retired officer only in his ’40s. Such miscarriages of justice inspired this film.

Blood is also deeply stained with color, tone, texture, and a weave of a diverse group of people, from family to protesters to witnesses and police. It simmers with complex and heated emotions set against the tragedy’s backdrop of an unassumingly beautiful city (quiet as its kept). This hardly distracts from the heart of the film’s message – an urgent call for social justice and political activism in the face of system racism.

But this film is not simply agitprop. Rather it radiates visually stunning artistic meaning and truth, more than most documentaries that don’t celebrate nature’s visual bounties. But the amalgam of human tragedy gives it a powerful pulse, brimming with passion, angst and contrastingly beautiful textures – cityscapes in a vivid array of luminous sky, atmosphere, light and grid patterns of intersecting streets. All that humanity has wrought here feels forsaken and besmirched each time we allow a citizen an unjust death.

More pointedly and poignantly, Blood traces snow accumulating on the red sculpture that symbolizes the name of Red Arrow Park where Hamilton died, as months and then years pass after his death. Thick snowflakes fall on the arrow like tears, or melting hearts chilled by harshest realities that seem to defy hope. And yet here we see The Rev. Jessie Jackson, among those activists who attend the hearings and protest rallies, embodying his most famous words, to keep hope alive. 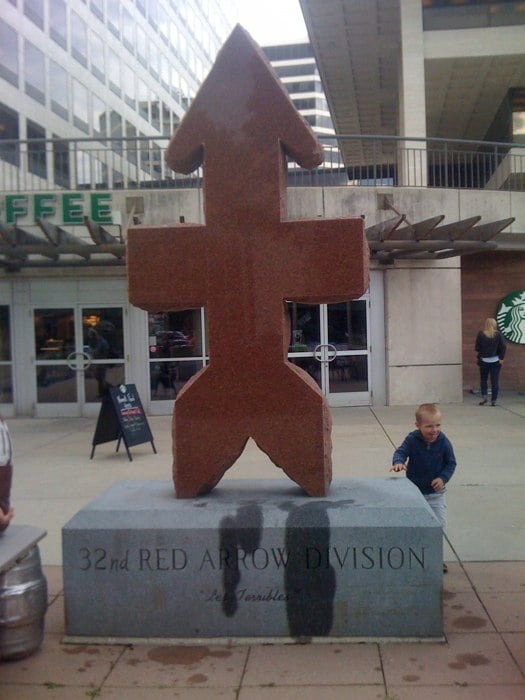 The tragic death scene, and its resonant sculpture, stand in the heart of downtown Milwaukee, across the street from City Hall and the city’s largest fine arts performing arts venue. The park might be the most popular public gathering place in the city, and includes a skating rink. Yet the red sculpture now seems fraught with meaning as tortured as the political circumstances of this case. The artwork’s arrow form commemorates the sleeve insignia symbol worn by the celebrated 32nd infantry division comprising Wisconsin and Michigan soldiers. The division is famous for its heroic efforts in advancing through seemingly impenetrable enemy territory during both world wars, so tough the French nicknamed them “Les Terribles.”

Consider the irony now underlying the artwork’s glorification: These soldiers fought so hard to protect our freedom and democratic way of life. Dontre Hamilton slept beneath this sculpture when he was accosted and killed by a Milwaukee police officer. A federal civil rights lawsuit on his family’s behalf remains pending. The arrow sculpture, also embodying the symbol of a cross, strains toward the heavens for deliverance and righteousness. Dontre Hamilton truly seems a kind of martyr, yet not unlike many other unarmed (or his case and that of 14-year-old Tamir Rice, “armed” with a toy gun) black males gunned to death by police. Today Hamilton’s family still feels shortchanged of full due process in their son’s killing.

Among the most touching moments of the Milwaukee Film Festival event was Hamilton’s brother Nate, now a strong activist, presenting the film’s director Eric Ljung with a denim jacket festooned with graffiti-like spray paint decorations. 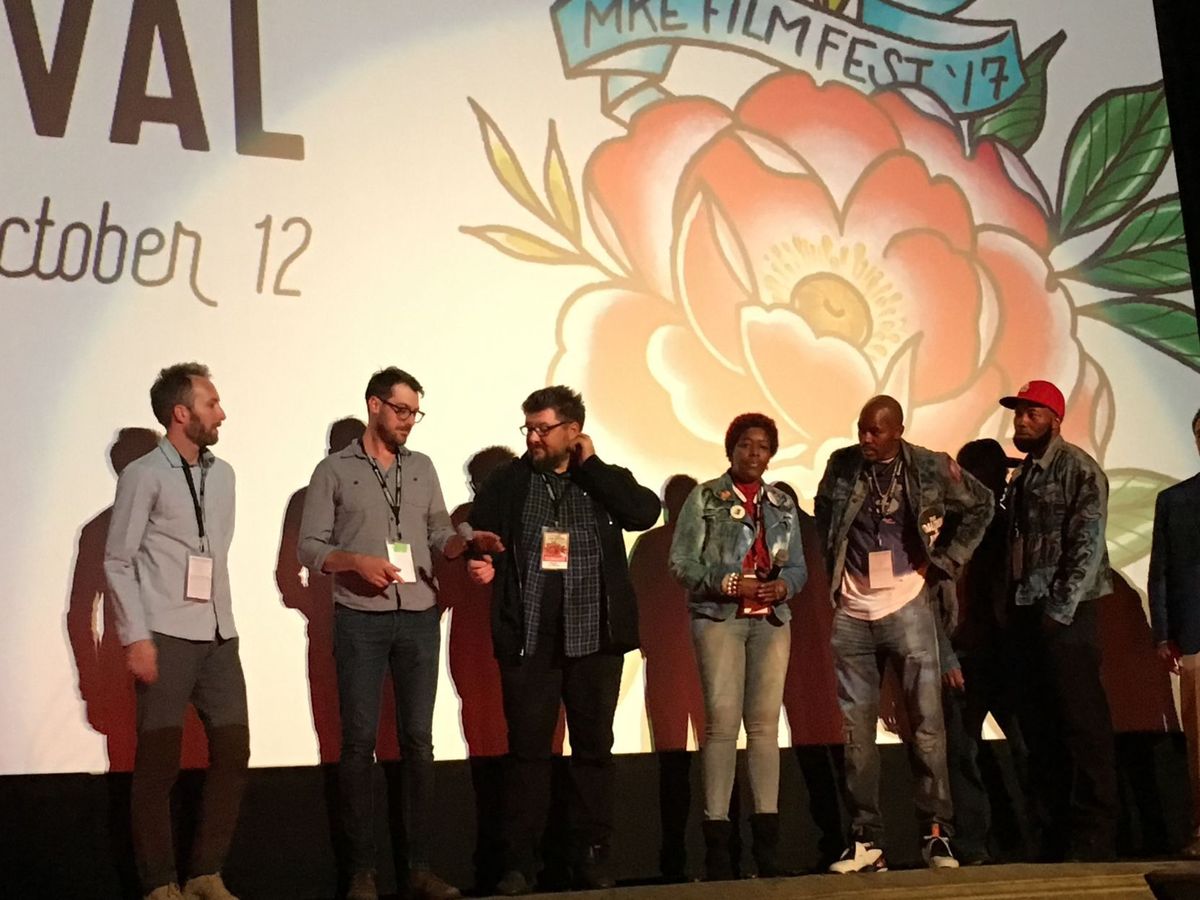 And mother Maria is a sort of madonna who has doubtlessly imagined a final embrace of her dead son akin to Michelangelo’s The Pieta too many times, yet she also embraces passionate activism. Still, we see in the film, she has some inner, hard-won serenity that has her cajole overzealous activists for restraint when they seem to become counterproductive.

At the film event Friday, Maria Hamilton appeared blessed with heavy but tearful joy, that her journey and quest continues, and that it may not be in vain. 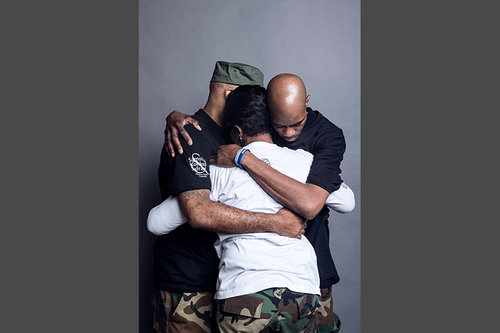