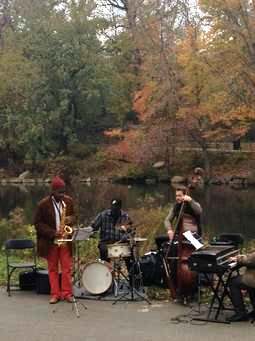 “September Song on two. Take me to the river”

The days may be dwindling down to a precious few, as the great jazz standard “September Song” informs us, but the fire of the trees signals that live jazz is just heating up in Milwaukee.

The first concert of late fall note seems a bit under the radar or perhaps obscured by fallen leaves. The Dave Stoler Quartet will perform tonight at 9 p.m. Several things make this event special but most of all that the featured member of the quartet will be tenor saxophone great Rich Perry, who himself lacks the recognition he deserves. This  is partly because he has been a key member of important jazz orchestras as much as the leader of small ensembles.
So, although Perry has made a series of acclaimed small combo recordings on the redoubtable straight-ahead jazz label Steeplechase since the mid-1990s, he made his mark in New York first with the great Thad Jones-Mel Lewis Orchestra, arguably the best modern big-band of the late 20th century.

And today he shares lead tenor chores with the somewhat more high-profile Donny McCaslin in the 21st century’s preeminent jazz big band to date, the Grammy-winning Maria Schneider Orchestra.
So Perry is a low-flying master of both high-flying straight-ahead swinging improv, as well as artfully orchestrated and even painterly playing, frequently demanded of players in the often magical-sounding tonal pallets of Schneider. 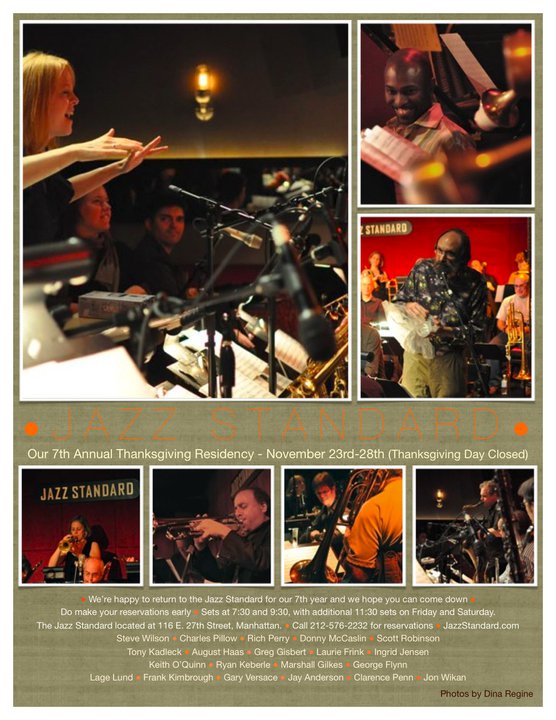 In this promotional poster on The Maria Schneider Orchestra’s Facebook page, tenor saxophonist Rich Perry solos with the Grammy-winning orchestra in the photograph on the lower right. Perry will be featured performer tonight at the jazz estate in Milwaukee with The Dave Stoler Quartet. Courtesy Maria Schneider Facebook page.

One of the lesser known of Perry’s small-group recordings is as a side man with Madison pianist Dave Stoler on his excellent 1994 album Urban Legends which also includes tenor saxophonist Rick Margitza and the sterling rhythm section of bassist Ron McClure and drummer Billy Hart (the latter a member of Herbie Hancock’s iconic Mwandishi group). Stoler makes his home in Madison but periodically  plays small group gigs in New York, and that recording reflects the sort of respect he commands among musicians in the know.
Stoler himself has sounded like he’s been woodshedding extra hard in recent times and is playing at the absolute top of his game, as recent gigs have shown. Perhaps it’s an extra-hard focus on his plans for another recording, which probably will include Perry again.

Along with Perry, Stoler’s quartet at the Jazz Estate will include his highly simpatico regular rhythm section of bassist Chuck Ledvina and perhaps Milwaukee’s preeminent jazz drummer, David Bayles.

The Jazz Estate will remain a focal point of world-class jazz when The Tom Harrell Quartet performs two shows on Monday, October 30th. Harrell is consistently regarded among the finest trumpeters in modern jazz today and his skills as a composer remain in the highest echelon. He has written for full orchestras including his brilliant album Impressions which also drew from the classical Impressionist tradition of orchestration. 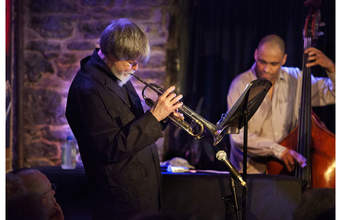 And yet the quintessential genius of the man himself may be best captured in a small group live recording, Tom Harrell: Live at the Village Vanguard from 2001. And that’s the sort of bag one should expect to hear him playing in at The Jazz Estate, although it’s hazardous to predict such things as this inventive musician seems forever full of surprises.

Harrell will perform with superb Milwaukee-based musicians, pianist Mark Davis, bassist Jeff Hamann (perhaps best known as the house bassist for the popular NPR program “Whaddya Know?”) and drummer George Fludas. I’m sure those musicians are boning up on charts for Harrell’s most recent High Note album, Moving Picture, which characteristically displays his ability to take the listener far beyond mere notes and chord changes and melodies to something that evokes life, beauty and truth, just as the oft- moving and multimedia magic of cinema can.

The evidence of that recording shows once again that Harrell is an extraordinary master of lyricism, both in his distinctive ways of assembling tunes, and in how he thinks as a soloist – with lucid, deliberate articulation of shimmering and songful ideas. He can even pull this off at a fairly fast tempo.

And he does this consistently as a prolific artist, with annual albums and not infrequently two, and sometimes three, recordings a year.

For information on tickets to the Harrell concerts, visit:http://tomharrell.brownpapertickets.com/

Finally among upcoming fall offerings, keep in mind Saturday November 4, when the Milwaukee Jazz Orchestra and the UWM Jazz Ensemble kick-starts the 2017-2018 season with a dynamic concert celebrating the Milwaukee jazz tradition that was championed by Milwaukee native and jazz legend, Woody Herman.

But the concerts will also be a great chance to hear music from the Milwaukee Jazz Orchestra’s recent recording Welcome to Swingsville!  which invites you to an imaginary place populated not only by this orchestra but also the full spirit of unadulterated swing, which thrives there from dawn until ’round midnight, and beyond. The recording includes originals by leader and reed player Kurt Hanrahan and guitarist-composer Steve Lewandowski as well as classics by Juan Tizol and Duke Ellington, Frank Loesser and Charlie Parker with Gil Evans.

So don’t let the mournful “September Song” and its accompanying season give you the deep-down blues. Better yet, transmute that bluesy spirit into a passion for a musical and brethren beauty, for live jazz, and go and get it.