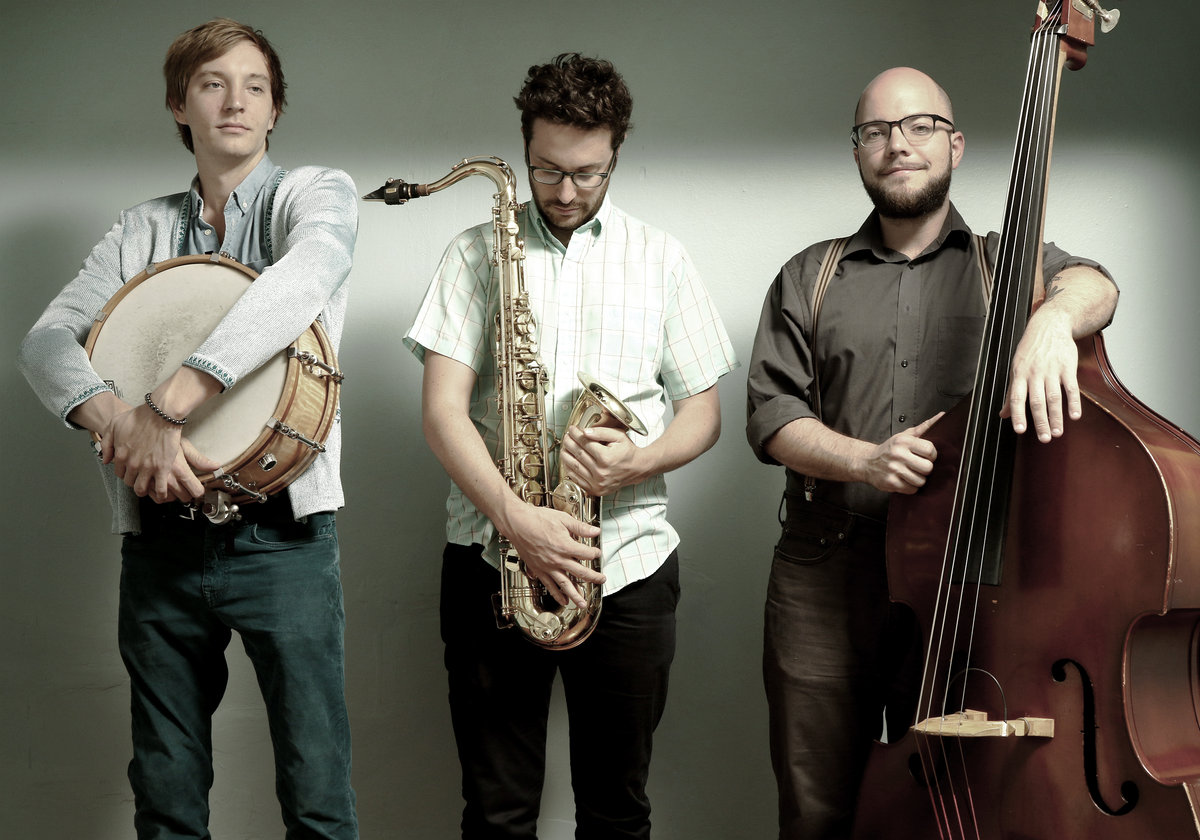 Nutria will then perform two sets at 7 p.m. Friday, March 24, at  The Jazz Gallery Center for the Arts, 926 East Center St.

“Named after the infamous South Louisiana swamp rat, Nutria is an acoustic trio that performs original modern jazz compositions with an emphasis on collective improvisation.  We creatively explore traditional music of the African diaspora & Eastern Europe as well as the avant-garde.” – Byron Asher, Nutria

How can you not be disarmed by a jazz band’s self-description, which begins so unassumingly, that willingly allows the band’s identity to wallow in such dank, swampy realms. Though the nutria may be “infamous,” probably for his cagey and nefarious ways, one can assume that the scuffling rodent does so for the sake of merely scoring a meager meal he might scrounge up from bits of human detritus. 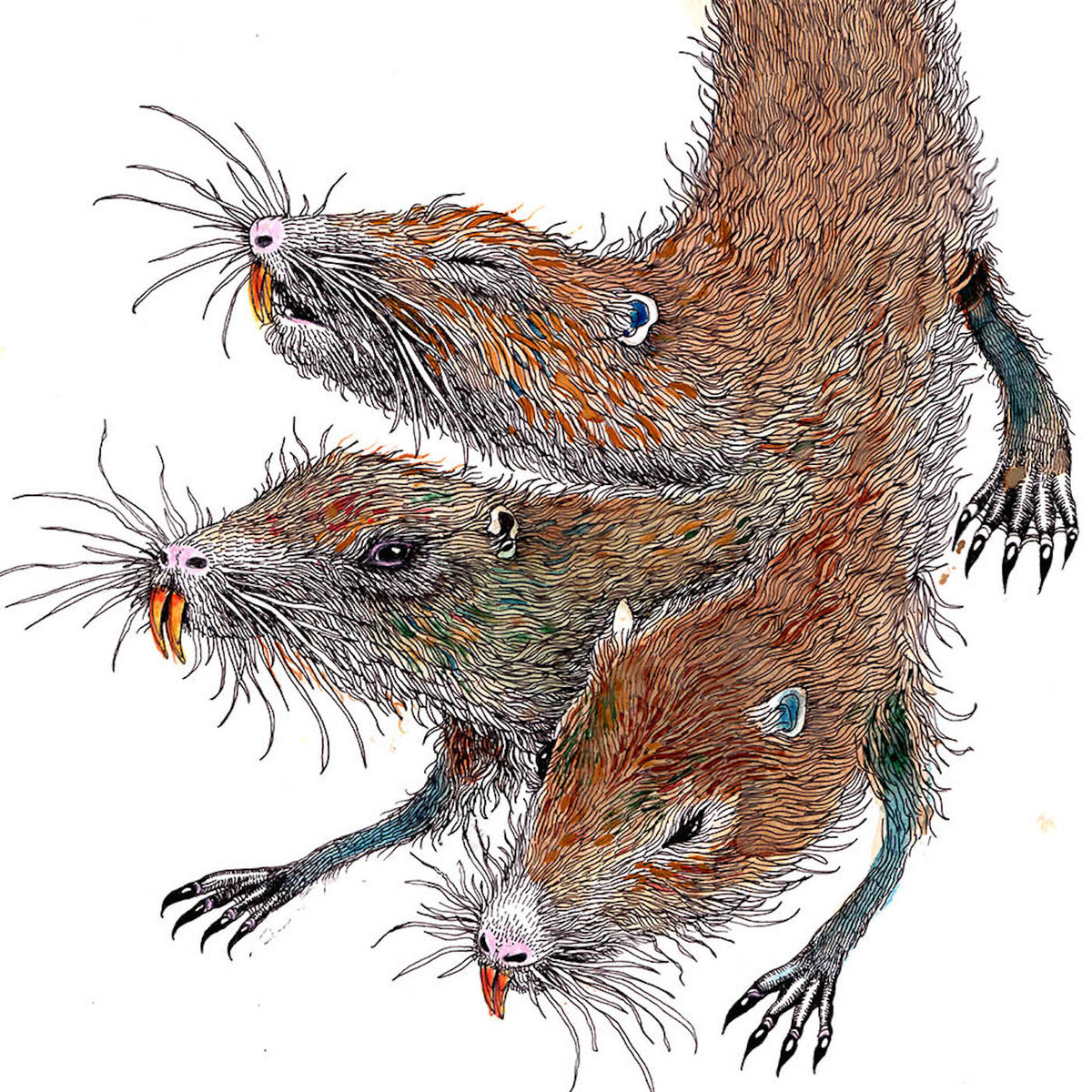 A fanciful illustration of the “notorious” South Louisiana swamp rat called nutria. Courtesy nutria. com, the website of the jazz band named for the critter.

Nutria’s greatest association with fame to date may be a hat made out of the rat’s fur which Elaine Benes uses in a Seinfeld episode. “The Chicken Roaster” affair opens with Cosmo Kramer unwittingly becoming addicted to the roasted chicken of a Kenny Rogers fast-food franchise that beams its sign into his bedroom, disrupting his sleep.

In a subplot, Elaine charges $8,000 to her employer’s account for an extravagant Russian sable hat, for the sake of George Costanza, who covets it. But hapless George leaves it behind at the apartment of the hat sales clerk, in hopes of getting a second date with her, after he typically subterfuges his own first date. 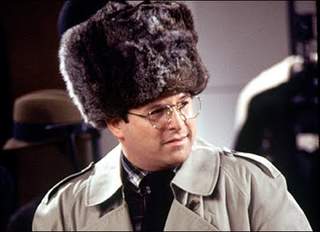 In a scene from the Seinfeld episode “The Chicken Roaster,” George Costanza imperiously flaunts his $8,000 sable hat, charged for him by Elaine Benes to her employer’s expense account. Or is the hat just plain, old, ratty nutria? Courtesy newdressaday.com

When confronted about her account charge by the Peterman Corporation, Elaine tries to claim the mangy nutria hat as her actual purchase, but her ruse fails, and her job is on the ropes…The episode also features a scene of Jerry Seinfeld accidentally dropping nutria rat fur all over diners’ chicken in the Kenny Rogers restaurant.1

Given such sorry cultural province, there’s clearly self-effacing humor at work with this jazz trio but also, one discovers, a clear strategic intelligence and inventiveness that cajoles listeners to allow the mangy nominal being its small corner space in our environment. Indeed, is it beneath us to throw him a scrap from a deserted plate of food?

For there’s plenty more that this Nutria has to offer you in return, from the evidence of six original tunes I have recently heard on YouTube videos of the band, which will soon release a new album. And the range of musical influences show a substantial depth of artistic resourcefulness and assimilation in their trio style. Here’s a critical perusal of those tunes. I refrain from generalized comment as this doesn’t add up to a whole album or artistic statement. :

“Ghosts Before Breakfast”: A brooding opening melodic ambiance. Then a tempo arises, an almost tiptoe gait, and the second chorus becomes more syncopated and playful. Then improvisation seems to begin. As with the theme, the solo honors space and grace, while gaining momentum. Byron Asher’s large, generous tenor sax tone and melodic invention recall Sonny Rollins.

“Call to the Air”: The bassist Trey Boudreaux  opens, with Shawn Myers’ simmering drums and Asher again evoking Rollins in the jump down to a low, fat register. De-da-deeee. The bass and drums now fairly dance and the tenor circles languidly around the buoyant tempo. Then Byron inserts more rhythmically sharpened phases until he unleashes more fire while still showing respect for space, in an unhurried manner. As the tempo does pick up he fills that with rich tones and tart phrases. The groove carries on over a supple two-note sax vamp.

“The Hero” (Live at Old Mint, New Orleans): Here you feel the essence of Nutria’s very congenial style. A punchy groove is driven by the bass. At one minute, Asher’s clarinet enters, with a nifty little pirouetting riff theme. His solo characteristically works off his bandmates’ rhythm and this is the most swinging piece so far, with a bluesy ambience, yet the mood is buoyant and frisky. The bass solo is bounding and seems to possess some of the character of a person who asserts a stance in a manner potentially heroic. The clarinet returns with stalking phrases and ends with a witty little conversation with bass Boudreaux. The use of the clarinet reflects the timeless New Orleans tradition but the music is decidedly more contemporary than traditional New Orleans music.

“Trini-Gul” : Here’s the Sonny Rollins calypso approach, the tenor in a gutturally masculine-yet-songful voice sustaining the almost celebratory dance-like melody and feeling. A bass solo follows, then the tenor solo extrapolates on the mood and the tricky but amiable melody.

“Gloomy Pirate Tale”:  A minimal six-note sax riff finally releases and melts into an exposition which, at first, unfolds languidly then becomes increasingly voluble, one of Asher’s most inventive solos, in its scupltural twisting of rhythmic ideas. A unison bass-sax line seems to pose questions about the pirate’s gloomy tale, certainly something worthy of skepticism given the sly and avaricious nature of pirating. Back to the six-note riff, a curious tale indeed. As a postscript, look closer and you might see a water-logged nutria tiptoeing carefully across a hawser of the pirate ship, in search of tasty contraband.

“Knowing” opens with a brief, mournful but expressive bass solo reminiscent of the late Charlie Haden. The sax’s long whole notes slide into a tender theme, then shift to a high register and conveys lyrical insight of a situation or circumstance, all suggesting the nature of this “knowing” is sad, regretful, and only provisionally hopeful. But it’s a lovely piece of music with a strong psychological character and resonance regarding the nature of knowledge and, by extension, truth. This, of course, speaks ironically to out current political miliue of “alternative” facts, compulsive lying, and outright slander.

1 Thanks to Seinfeld aficionado Ann K. Peterson for reminding me of this episode.