What a pleasure to be reminded how fortune smiles on Wisconsin with the blessing of two great symphony orchestras. There’s nothing like an orchestra working its big-canvas magic in person. In recent years I’ve reacquainted myself with the glories of the Milwaukee Symphony Orchestra.

On a rain-soaked day, sheets of rain, billows of rain, Ann Peterson and I drove to Madison to hear that city’s superb orchestra, but not before what has become a ritual, a stop at the Pine Cone Inn halfway between the cities in Johnsonville, to pick up a gluten-free monster cookie.
With slightly soggy crumbs nestled in laps, we rolled into Mad Town and stopped first at The Harlem Renaissance Museum on East Washington.

This place is  worth your time although, on a Sunday afternoon, also consider that a religious service is held in the back room, which is the way to enter. So if you make your way quietly to the front galley, you now see an exhibit of Cubist jazz art by the museum’s artist-in-residence Martel Chapman. The exhibit also includes a tribute to the great Harlem Renaissance writer Jean Toomer, a Wisconsin resident and one-time faculty member at the UW-Madison. On display were a selection of Toomer’s letters hand-written and typed to various people during important years of his career and they are illuminating and a bit historically transporting, although I wasn’t taking notes (apologies), so I can’t go into detail.

But Chapman’s art is a marvel. He has an uncanny ability to do conventional oil portraiture with great insight and style. But most of the pieces display his own trademark Cubist characterization of jazz and African-American cultural figures. Despite the almost futuristic stylization he’s capable of capturing the deep character of someone as profound as John Coltrane as he does in a portrait titled “Late Coltrane.” I  believe this is actually an interpretation of the famous black-and-white photograph of Coltrane for the album A Love Supreme. 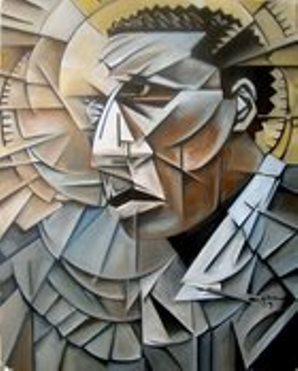 He does the same for white-haired sax icon Sonny Rollins and even superstar Black studies scholar-minister Cornel West. It’s almost as if the artist is torching a living person out of tubes of metal. Chapman’s not going for realism here, rather the essence of the artist, a remarkable achievement somewhat akin to a jazz player’s act of getting to the truth of the matter through a musical stylized abstraction.

Some of Chapman’s pieces comprise complete scenes more akin to Georges Braque’s early, somewhat painterly ” analytic cubism” such as the utterly delightful “Quartet ’58.” This painting interprets the Thelonious Monk Quartet with John Coltrane performing at The Five Spot Nightclub in New York in 1958. The luxuriously-faceted piece is a virtual whirlygig of animated expression spinning out from the fabulous figure of Monk himself whose splayed arms and legs hover around the keyboard like a hipster Gumby. 1 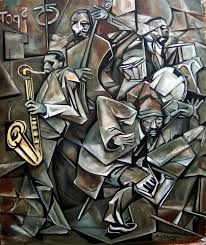 For all these fine artistic moments, the afternoon’s main event was the Madison Symphony Orchestra. They rolled up their sleeves with a taste-whetting performance of Beethoven’s Coriolan Overture, Op. 62.
Then Emanuel Ax ambled on. The veteran, gray-maned and portly pianist has acquired a decidedly avuncular demeanor by now. But he sat down and showed that any uncle who can play a Beethoven concerto (No. 4) like this is worthy of inviting to dinner any old time. His playing absolutely sparkled and finely mirrored the orchestra’s rhythmic dancing through the melodies and sonic gusts rippling through deep meadows of sound.
Ax encored with an unannounced Debussy prelude, I believe, which unwound with strangely complex colors and arabesques.

Soon it was time for the centerpiece of the concert, Gustav Mahler’s Symphony 4 in G Major, one of the majestic pinnacles in the standard repertoire, and of late Romanticism.
I’ve always loved this work, as have many.  But it had been so long since I heard this orchestra after covering it for nearly 20 years. I somewhat forgot how fine and firm a grip DeMain has on such myriad details, dynamics and tempo, etc. and how superbly responsive the orchestra is.

They showed us what a ravishingly immersive creation the Mahler is, once again. It must be a supreme pleasure sit in the middle of that and participating in it. I’m still sappy enough of an Irishman to be moved to tears by it. 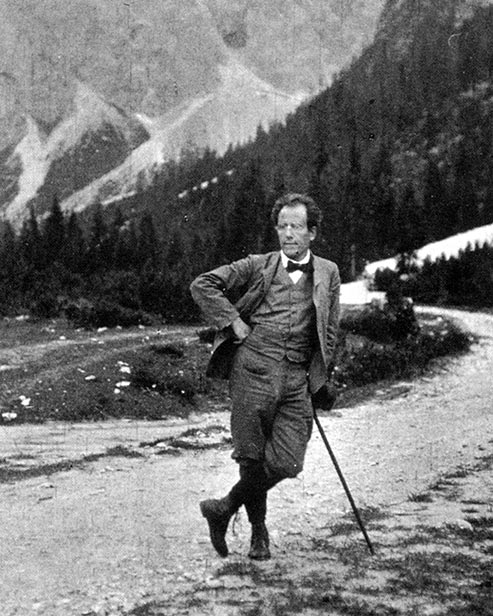 Composer Gustav Mahler outside the Grand Hotel Toblach in the Alps. Courtesy grandhoteltoblach.com

So thank you for moving me, my old friends. It’s in the way that all the strange and wondrous colors and rhythms engulf the listener, like a fully-evoked world or lifetime of memories, and then the finely-wrought melodies and fanfares that swell up like water-drenched sirens. This all leads to that late, luminous cathedral-like chord rising to forever, not long before the soprano enters.

This is DeMain the Grammy-winning, Leonard Bernstein-mentored opera conductor synthesizing those skills into the orchestral domain for a rare sort of larger-than-the-moon musicality. He’s clearly spent all the time necessary for a reach for transcendence, having performed the whole Mahler symphonic cycle during the years pI lived in Madison. I would love to hear this band record a Mahler symphony.

A protege of Leonard Bernstein, DeMain has led the Madison orchestra for 22 years.

And such a celestial song in the finale, though guest soloist Alisa Jordheim, still doesn’t compare to the warm magnificence of Judith Raskin with George Szell and the old Cleveland recording. Ms. Jordheim had confessed to DeMain that she was suffering from a cold, which did not seem to affect her voice’s lovely timbre. But at moments she seemed to strain to project over the orchestra.

Still, it came to a marvelous end, like a winding scenic journey to a high vista.

And finally DeMain nudged the unaccompanied basses along to extend the symphony’s last very note, like an earth-whispering Ommmm.

Sublime. I could go on, but it would be just the German side of me getting a little oom-pah pushy.

So we headed home. And the rains came, again, stronger than ever.