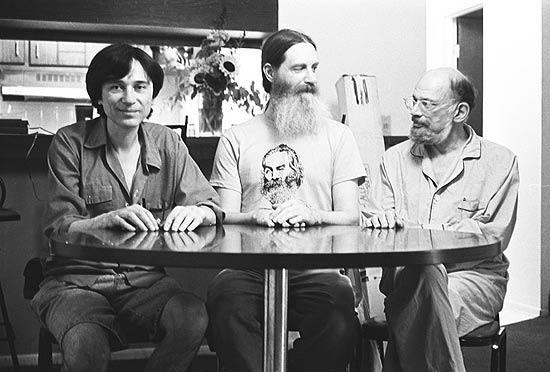 Jeff Poniewaz (left) is survived by his longtime partner, the poet Antler (center). They are shown here in a meeting with Allen Ginsberg. Courtesy jennifer-turner.com

I recently shared a couple of fine heartfelt poems on Facebook by local poets Harvey Taylor and Sarah Moore that served as tributes to Milwaukee Poet Laureate Jeff Poniewaz, who died recently.  But I quickly realized the obvious, that proper honor to this extraordinarily loving, sweet,  passionate and engaged citizen of the planet would be to post one of his own poems. As a poet, Jeff was an eco-visionary, writing insightful homilies and bracing jeremiads regarding the human poisoning and ravaging of this earth, long before such awareness was fashionable.

I can’t think of anything more apropos at this time than his poem “Tomb of the Unknown Poet.” I’m not sure Jeff will actually have a tomb, because has been cremated, after a long, courageous and heartbreaking battle with cancer. I imagine he would want to have his ashes scattered along one of his favorite natural settings in the Milwaukee area. But that is probably up to his partner, Antler, a former Poet Laureate of Milwaukee.

I have also reproduced Jeff’s biography which, along with the poem, are from the website of Woodland Pattern Book Center.http://www.woodlandpattern.org/poems/jeff_poniewaz01.shtml

Jeff Poniewas taught “Literature of Ecological Vision” via UW-Milwaukee from 1989 to 2009. He also taught a course called “Whitman & Ginsberg: Liberating American Bards.” Ginsberg praised Jeff’s work for its “Whitmanesque/Thoreauvian verve and wit.” His poems have appeared in many periodicals and anthologies. His book Dolphin Leaping in the Milky Way won him a 1987 PEN “Discovery Award.” Lawrence Ferlinghetti called Jeff’s epic “September 11, 2001,” written during the closing months of 2001, “the best poem I’ve seen on 9/11.” Excerpts from it were published in September 11, 2001: American Writers Respond; An Eye for an Eye Makes the Whole World Blind—Poets on 9/11; Van Gogh’s Ear out of Paris, France; and as a chapbook titledSeptember 11, 2001. His other chapbooks include Whales Hover Over the Freeway (2007) and Polish for Because—Meditations of a Former St. Josaphat Altar Boy (2008). A volume of his Selected Poems written since 1965 is on the near horizon. He was chosen Milwaukee Poet Laureate in March 2013. His last name is pronounced POE-nYEAH-vAHsh and is Polish for “because.”

The Tomb of the Unknown Poet

Why no Tomb of the Unknown Poet?Wasn’t he killed as sure as the UnknownSoldier?Didn’t he die running wild afterthe wildest beauty the sameas Wilfred Owen?Didn’t he step on the toes of landmineminds?Wasn’t he mowed down by machine-gunsof mechanization?Didn’t he throw himself on the grenadeof scorn lobbed at Poetry?Drape a green flag of living grassover his casket.Blow his taps on panpipes:phoenix syrinx!Unknown Poet launched into the Unknownlike a poem in a manila envelopeaddressed to ImmortalityCare of the worms who edit scrupulouslybut send no rejection slips.