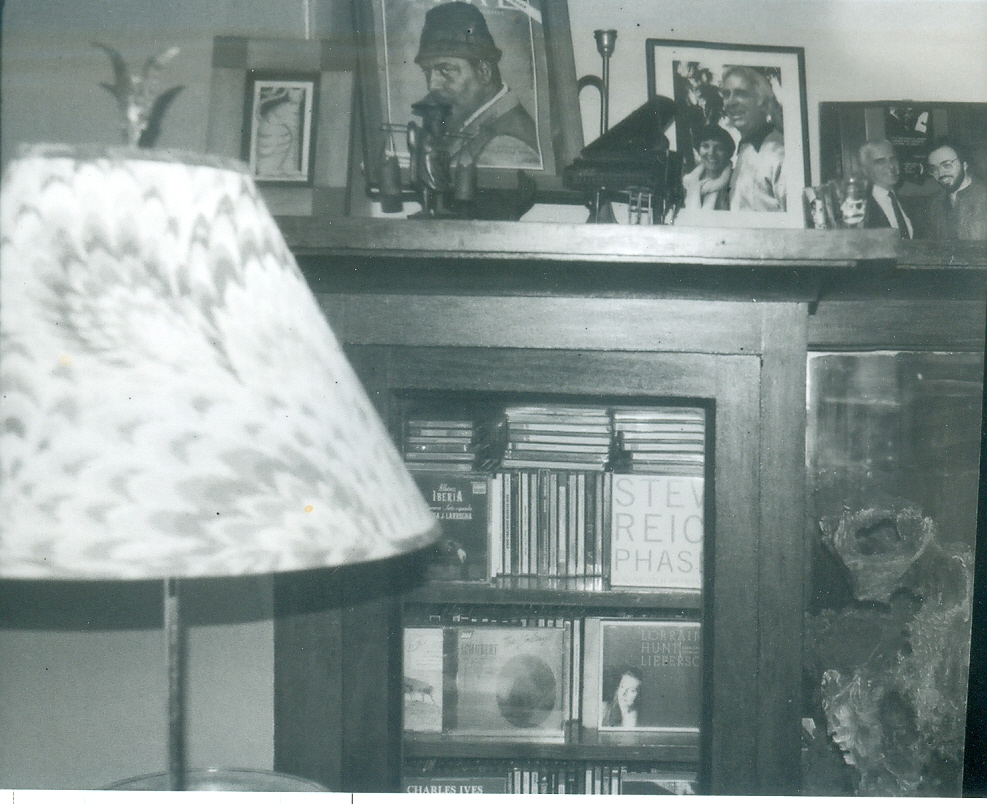 I took this photograph shortly after the small tin piano-shaped music box on top of the buffet shelf began playing its song, after several years of sitting silently. The music box formerly belonged to my deceased mother (who happens to be pictured beside the piano with my late father).

I’m a bit bewildered by small, spooky occurrences of late, that resonate with sentiment.

inform us that sentiment ain’t a bad thing, culturally speaking.

Uncle Tom’s Cabin was the feminine John Brown, they might argue.

But a recent afternoon I was browsing through Tocqueville’s Democracy in America,

feeling burnt and wired, after a lousy night’s sleep.

Then, I hear a slight tinkling, teasing my brain.

I walk into the dining room…

that’s sat on the buffet silently for a couple of years.

Suddenly, it’s playing its tinny little heart out, a few feet away

from the cassette tape of my eulogy of father Norm’s funeral,

which appeared, out of nowhere, not long ago right on the bookshelf.

The piano’s melody is touching but sappy: “We’ve Only just Begun” by Paul Williams,

which…The Carpenters nailed together into a hit.

The piano’s song “began” a few years ago

when I first wound the tin piano up,

shortly after Sharon’s funeral. I let it play out —

or so I thought — then eventually set it down in the dining room.

which takes a striking modulation to seven successive minor chords

offset by one E Major 7. The minors help “sell” such sappy lines as “white lace and

promises…” The wide intervals of the phrases do as well.

So, Williams had a craftsman’s command of music.

And now the dippy lyrics nag at my brain

about “the people” informing the intelligentsia,

with his certain faith that American people

My own Tocquevillian faith in “the people” is tested regularly,

as much as my faith in a higher power,

but I seem to persist in such battered, residual beliefs,

still simmering in the petrie dish of my brain.

And to be clear, the Paul Williams who wrote that song

is not the same one who started Crawdaddy magazine,

one of the really seminal rock critics.

If Paul Williams the critic were still alive, it would be interesting

for him to meet with Paul Williams, the soft-rock songwriter

and have them argue whether the song

These days I sometimes wish I was 30 years old

and could have Jeffrey Foucault sing his wedding song

“One for Sorrow” (two for joy they say) at my wedding.

It always lifts my spirit. And he writes a hell of a lyric.

But then, how different is Williams’ song than

plenty romantic, and for Norm and Sharon’s wedding anniversary?

“My One and Only Love” and mom’s fave “Here’s That Rainy Day.”

I feel the heart tug and resist, or do I?

After all, The Carpenters sort of made my skin crawl.

Strange thing is, poltergeists don’t seem to. Not quite yet.

or de-alphabetize my CD library, or turn on an “Addams Family” video and, along with

Boris and Natasha, do a steamy tango with my startled cat (supple Chloe could at least handle the kicks, the boleo, the head snaps and the female’s deep backwards back bend. But I doubt she would dig it. And I’d be “Ghost Busters” spooked.)

But what of the weirdness of these occurrences?

out of the blue?

I shrug it off, sort off.

I’d like Tocqueville to be in the room with those two Paul Williams.

Tocqueville seemed to feel that “we” the people “had only just begun, to live.”

Ditch the “white lace,” expand the lovebirds’ first-person plural to

“We the people…” He wrote a 700-page political science masterpiece

based on America’s “promises.”

It would be a conversation with four writers, if I attended.

I’d prefer not to talk much.

I’d be a Kakfa-esque bug in the corner,

too ugly for anyone to acknowledge.

So, I keep following my psyche through my mid-afternoon Twilight Zones

but also keep thinking and writing because

Norm and Sharon would want me to, I’m sure.

Then, there’s my dead ex-wife Kathy, and the third creepy occurrence — which fit

her impish personality to a T (too complicated to explain here, having to do with a computer screensaver “joke.”)

was bugging me to finish my long-postponed blog remembrance

of her — by her birthday, which I finally did.

So maybe that’s one spook silenced.

and of “Occurences at Owl Creek Bridge”  yet to come.

2 thoughts on “Recent Hauntings: Does American Democracy Stand a Ghost of a Chance?”