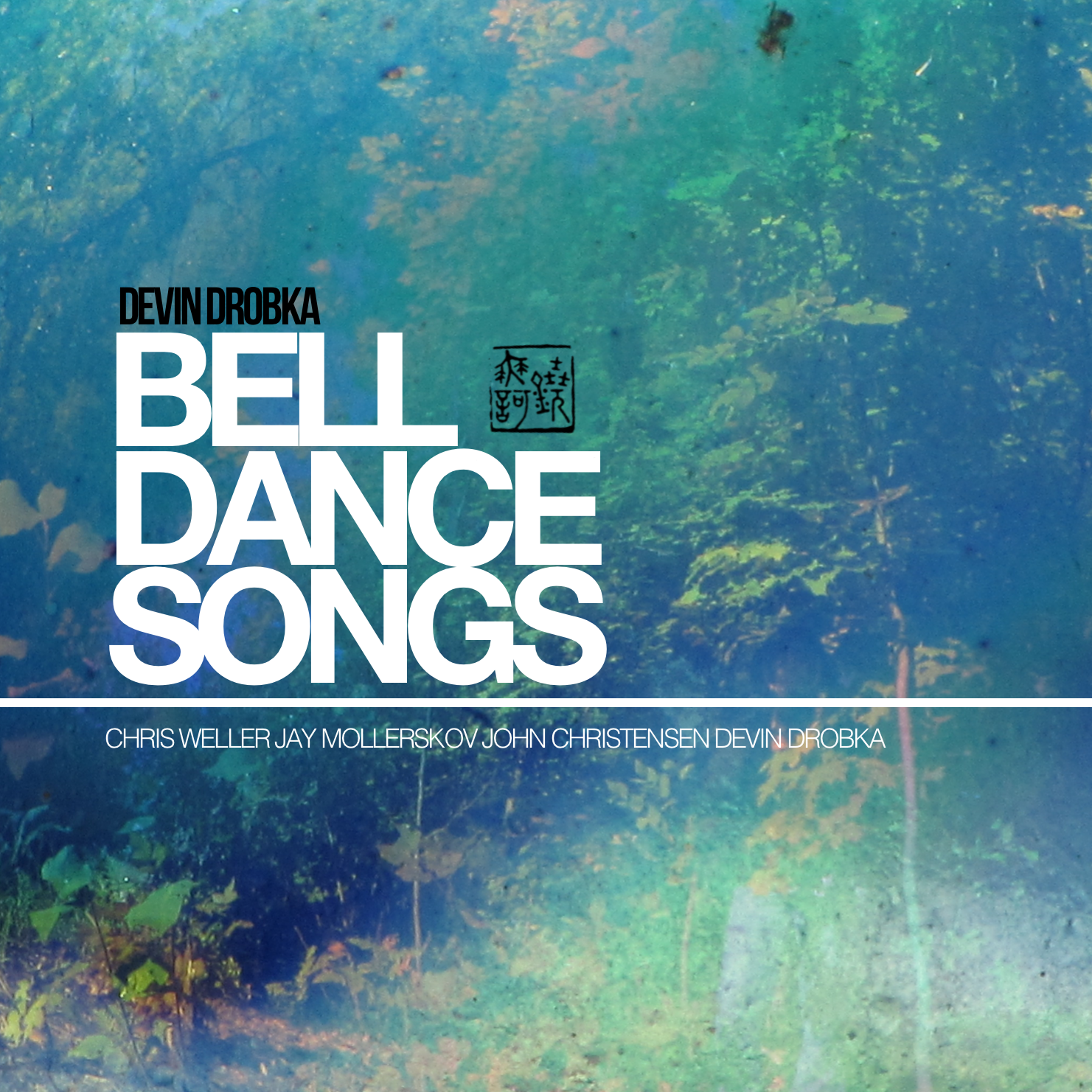 Devin Drobka evokes fellow composer-percussionist Paul Motian, one of his influences and heroes, like a kind of guiding light throughout this album. The CD-opening “Blues Town,” exploits the fraught relationship between a elegantly unfolding, mournful melody and a rhythmic pulse that pushes the melody like waves lapping against a rocky shore.

Bell Dance Songs brims with such melodic and rhythmic tensions, often evoking dance-like rhythms, as a bell’s ring might, resonating in circular fashion more than articulating step patterns or back beats. This creative activity is very characteristic of Motian, who always defied conventions of the rhythm-maker’s role.

Another eccentric but fecund jazz innovator, guitarist Bill Frisell, emerges as a contrasting inspiration to expand the sonic and conceptual palette on “It’s Been Days Since I’ve Heard from You.” This melody arrives at an even slower, a funereal pace, and Jay Mollerskov’s space-twang guitar creates a brief portrait, suggesting a lonely prospector with little hopes of discovering much more than the wind, and dust in his teeth. Bassist John Christensen and saxophonist Chris Weller plumb inconsolably sad notes. The idea of hearing from a friend or lover feels remote, another broken dream.

The pace picks up on “For Paul (Dia de)” when the drums again boost the melody to higher pitches. Saxophonist Weller and guitarist Mollerskov alternate in two-part solos, the former with Coltrane-esque courage, like the cry of a plunging eagle. Then the sax climbs a  steep and precipitous sonic plane. The latter plays a welter of angularity, increasingly atonal. Amid this, drummer Drobka unfurls a fusillade of drum rolls at different dynamic angles, in this explicit Motian tribute.

For its challenges, Bell Dance Songs allows breathing spaces, like “Restless Dogs” which cuts away the bricolage while maintaining the eccentric manner and articulation.

Although a pianoless quartet, Drobka’s group sometimes recalls pianist Keith Jarrett’s 1970s American quartet with Motian and saxophonist Dewey Redman, with its roiling rhythms and forlorn, piquant melodies. But on “Bring Out Your Dead,” free of pianistic harmonic underpinnings, the guitar and sax stoke a fire of sizzling expressionistic interplay, while forging their own entangled melodic ways. The composer confirms that this slightly madcap energy was inspired by absurdist British comedy troupe Monty Python, from a skit titled “Bring out Your Dead.”

This gives you a little idea of the the evocative power of these songs. In concert recently at The Jazz Estate, Drobka related fairly extensive and vivid anecdotes that inspired each composition. I asked him to elaborate on one at length, which involved a dream, a tune called “Ishan”:

“In the dream he was lying in his own bed but in a completely different room. A door opening awoke him and a shirtless man entered with long curly hair and a tattoo across his side, a highly stylized Audubon’s (rain) barrel body but with the head of a very geometric owl. I get up from my bed and asked who he was.

“Do not worry, my name is Ishan,” he replied. “I lied back in bed and he proceeded to sit at a desk in the corner. I looked away and when I turned back and look at him his hair is extremely short. He stands up and proceeds to walk out of the room. I follow and enter a gigantic rectangular room. Something like 150 by 45 feet, and all the walls were glass with dense foliage pressing against the windows. In the center’s great hall stood a long wooden table, about 90 feet, covered in books. The table is right underneath a skylight that was the same length as the table. Inside a tremendous storm arose. I could feel the wind and rain as if they engulfed the room.

Following Ishan closer to the table, one book stood out. “It was the largest book on the table and its pages were rapidly flapping because of the win. As I walked up I put my hand out to stop the pages and as soon as I did that, I awoke.”

It’s a not-untypical dream, a little peculiar but not too bizarre and with reasonably interpretable symbolism. Ishan seems to signify some kind of literary/environmentalist guru or shaman, and it suggests to me the desire for extraordinary guidance about our environmental crisis. The owl traditionally symbolizes wisdom, among societies close to the earth.

I’m happy Drobka still feels a real book is the source of such knowledge rather any of today’s more facile electronic media. So he finds a large book that might be a Bible, but more likely something environmentally substantial, like Rachel Carson’s Silent Spring or Thoreau’s Walden, or a book of Wendell Berry poems, even if those are shorter works. Or an authoritative anthology of environmental writing such as American Earth edited by writer-activist Bill McKibben. Or the latest scientific research on global warming.

Or something was more pagan or zen,  given the shaman implications. And its reasonable to ultimately see the mystery shaman as Motian, the defier of rhythmic convention, but the true conjurer of creative possibility.

Ultimately what counts is how well “Ishan” works as music, clearly with evocative inspiration, and this piece, like most of them, conveys a storytelling quality that gets the imagination asking questions of itself.

These are superb ambitions and accomplishments for composition and improvisation, and often well-realized on this record. It’s also a brilliantly indirect way of conveying a holistic environmental ethos. The album cover photo beautifully depicts a vulnerable rain forest. And bell dances suggest a ritual type of act, generating vibrations connecting with the mystical “music of the spheres.” Who can’t feel at least sympathy for such a world view? Drobka might suggest more than sympathy is needed for the planet’s survival.

My only caveat for this album is that, without Drobka’s diverting and guide-posting anecdotes (good material for missing liner notes), a fairly swinging or funky tune would have complemented and eased the insistently heady interplay. The band played an infectious funk tune at the Estate. Despite their tropes, swing and funk can still generate avenues of fresh ingenuity.

Bell Dance Songs conveys a tersely ardent energy that asks the listener to meet it half way. If you enjoy conceptual open air shifting under your feet, where structures turn into startling and lyrically probing shapes, if you like music to chew on, this is your record.

Bell Dance Songs is currently available online for only $5 at http://cargocollective.com/devindrobka