What makes this special for me is my last vivid memory of Dexter Gordon. I saw him live several times, and he was never less than fabulous, with his patented art of sashaying behind the beat, and his witty melodiousness. But I’ll never forget the first time I saw Bertrand Tavernier’s Round Midnight.

There’s not many films I can say that about, but this one was filled with exquisite, swinging and joyous jazz music. Yet I walked away from the theater feeling quite sad and reflective, which I think was director’s intended effect.

It’s a deeply moving film with great performances from all of the mighty musicians involved. And jazz musician Dexter Gordon’s acting performance in the lead role is astonishing. He was already dying at the time and, of course, hardly a trained actor. But then, he always had uncommon grace and eloquence in front of a concert or club crowd, so it shouldn’t surprise. Best jazz movie ever? Among scripted dramas, I’d say yes. 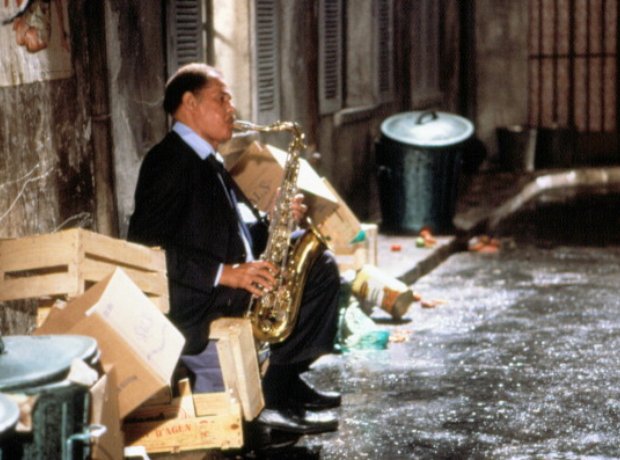 Dexter Gordon in a scene from “Round Midnight.”

If you’re in the Madison area you can see the Dexter @ 90 event at the Chazen Museum on Tuesday night and then again Wednesday at the Madison Urban league. But you can rent the movie any time, and I don’t think you’ll be disappointed.

Gordon plays a fictional jazz musician in Paris, loosely based on the last days of the great bebop jazz pioneer Bud Powell. Tavernier himself plays a jazz fan who befriends the magisterial and coolly magnanimous saxophone idol.

There’s not a lot of plot to it. Rather you get more of a forlorn meditation on the jazz life. The film’s very existence underscores one of the profound ironies of that life. These purveyors of an original American art form remain the proverbial prophets without honor in their own land. The jazz musicians are comfortable enough by now in their expatriate living places that you see the great vibist Bobby Hutcherson cooking away almost contentedly on his single-burner stove in a tiny Paris apartment.

Yet somehow the heavy sway in Dale Turner’s long stride stride conveys the dejection of decades of comparative rejection in one’s own homeland. I’m speaking here of the demeanor of the musician/actor  – Dexter Gordon. In real life, Gordon was welcomed back to clubs and concerts when he came to visit the States.

But he could not make an honorable living in his own country so he lived in Europe through most of his career. And he was among the music’s three or four greatest living tenor saxophonist  during his lifetime.

I sure hope the UW orchestra doing Gordon’s music in Madison plays “Chan’s Song” from Round Midnight. In the film, Gordon plays it uncharacteristically on soprano saxophone. I believe it was written and performed for his daughter Chan. Here you hear the depths and tenderness of the man in a superbly lyrical melody and performance. It’s my most immediate single memory of Dexter, along with the movie’s image of him sitting on a stone fence along the Seine River, slumping over…

3 thoughts on “A grand dame of jazz presents a celebration of “Dexter Gordon @ 90.””