Was this all just a frigid Alaskan fairy tale, an old Eskimo myth, a Big Foot Figment of the Imagination?

That’s what the 2012 movie Big Miracle seemed as it began, an increasingly astounding  international attempt to save a family of three gray whales trapped under miles and miles of ice off the far western Alaskan coast, with one rapidly freezing-over breathing hole keeping them alive.

Sure, that’s a compelling premise to someone like me, who — if I had long-enough arms — could be pegged a whale hugger. But even I expected an earnest little documentary when I clicked “Add” for my Netflix queue, and then popped it in my DVD player. For some reason I completely missed the story when it actually happened in 1988, even though it turned into a huge news event.

This actually is a superbly paced, strongly acted and suspenseful dramatization. The event was notable for the pathos of the whales’ predicament. But it’s remarkable for the human response which, regarding whales, is more normally a somewhat remote fascination and ambivalence. That goes back at least to the tepid original public response to the textual and symbolic complexities of Moby-Dick, in which the white whale is often interpreted as evil, or at least inscrutable nature.

So “why all the hullabaloo about these whales?” That question was the actual headline of an article by Howard Weaver in the Anchorage Daily News, published October 23, 1988. Weaver’s commentary frames the story’s improbability:

”Oil companies decided to spend uncounted thousands as much as a half million dollars, by some estimates on a rescue effort. National Guard pilots risked their lives on an untested bargetowing operation. A couple of Minnesotans flew up uninvited, at their own expense, because they figured they knew how to keep the ice open. (They did.)

But why? It defies explanation for one very simple reason: it really doesn’t make sense. 1

No one had a lot to gain; conventional human interest sooner or later comes down to filthy lucre, when large forces come together to effect some sort of change or outcome.

What actually happened seemed almost too humane and altruistic. At first, an oil drilling executive sees his involvement as a publicity stunt, to burnish his image with environmentalists while he plans on plundering the Alaskan wildlife reserve with his oil-thirsty drills. But the CEO, played by Ted Danson, ends up with something akin to a heroic commitment to saving the whales.

But this movie actually revolves around a zealous Greenpeace activist (Drew Barrymore), who triggers the rescue effort. She’s also the ex-girlfriend of the TV reporter (John Krasinski) who discovers the trapped grays and breaks the story. That additional plot line juices up a movie which becomes quite phenomenal and deeply affecting, at least for anyone with whale-hugging tendencies or an environmental consciousness.

Dermot Mulroney plays a National Guard colonel who mans the ice-breaking barge hauled by helicopters nearly 300 miles over frozen north Alaska to Point Barrow, to hopefully break up the ice path closest to the open sea.

Yet Barrymore steadily dives to the movie’s heart and steals the show. She’s grown substantially as an actress and as a critical thinker, as evident from her commentary with Robert Osborne every Saturday night on Turner Classic Movies The Essentials series. 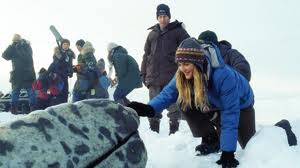 Rachel Kramer (Drew Barrymore) and one of the trapped whales. Courtesy filmofilia.com

Here, she voices each pointed environmental concern in the face of Danson’s initial exploitative bravado, and ends up changing him.

She also forges a fast emotional bond with the three whales, including a fearless dive into the icy water to investigate their situation more closely, and then frees the weakening baby whale from a fishing net caught in its fluke. 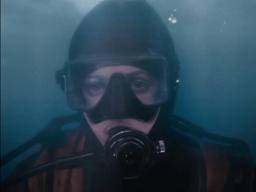 The indigenous Eskimos also change from simply hunting whales to doing their part to keep the whole from freezing over — and then ingeniously cutting a series of breathing holes in the ice leading toward the closest open sea five miles away.

But will any of this effort work before the magnificent mammals exhaust themselves and drown, or the hole freezes over in minus-50 degree conditions?

Barrymore (as the tough, disarmingly charismatic Rachel Kramer) intensifies her powerful connection to the whales as intelligent living beings in a desperate situation. So the viewer’s involvement deepens through the force of Rachel’s passion, intelligence and indominability. Gradually the whales — somewhat cutely named Fred, Wilma and Bam-Bam — become real live characters. Rachel’s emotions also simmer over her complicated, unresolved relationship with her ex, Adam, whose head has been turned by a porcelain-pretty TV reporter. I’d rate Barrymore’s performance as one of the strongest and most under-acclaimed of 2012.

I’m not sure why Big Miracle flopped at the box office (Rotten Tomatoes‘ critics meter rates it a respectable 74). Does the historic story seem distant, a blip in time? It’s a family movie with not enough sex, drugs or violence to attract the base teenage movie audience.

But seeing the movie makes the Reagan-era experience (“The Gipper” is actually a character in the movie) powerfully immediate and resonant. It demonstrates how the self-absorbed human world can surprisingly respond at a deep level that even transcends political enemies, as a Russian ice-breaking ship finally rushes to the rescue effort. 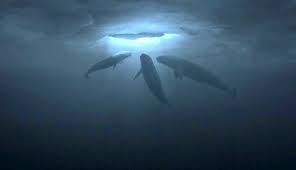 The trapped whale family in “Big Miracle.” Courtesy the lifestylereport.ca

The general public today would seem to appreciate such an existential crisis of survival all the more. As the movie intensifies, one can almost imagine being a desperate whale, incessantly swimming up to that hole for air. Humanity’s interdependence with the natural world becomes palpable — the heart pulses as the body begins to freeze.

One thought on ““Big Miracle”: A video movie gem hidden below an icy Alaskan surface”