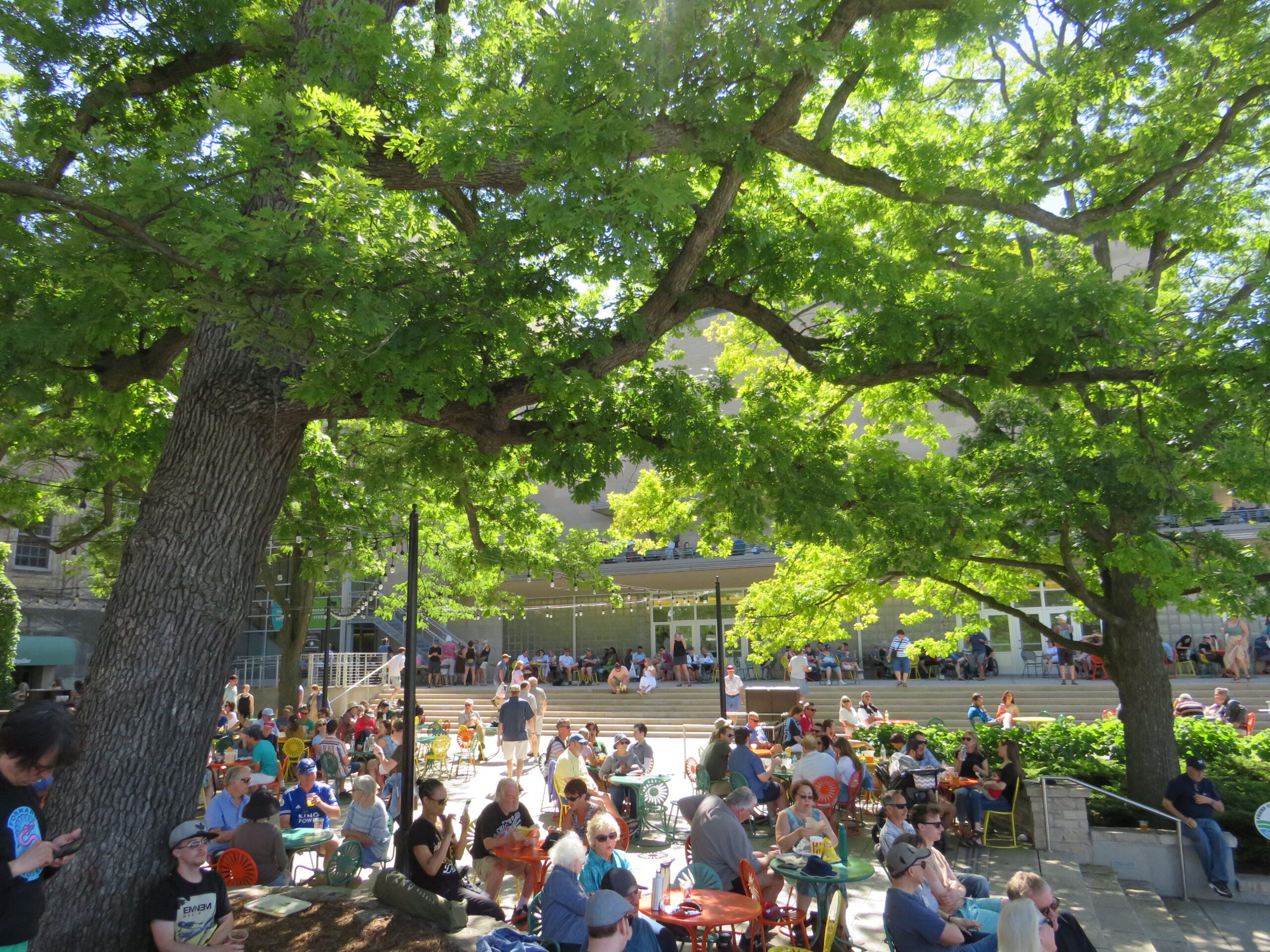 Saturday the sky sang brilliant blue, the wind whispered Mary, and the sun burned like the jazz, from warm to hot. I returned to arguably the best summer jazz festival in Wisconsin, The Madison Jazz Festival. The event immersed the city in jazz for nine days, in the streets, clubs, and concert halls, and on the ever-inviting Union Terrace, overlooking Lake Mendota.

The Terrace is where I made plans to meet one of my dearest friends from my 20 years in Madison, Richard “Ricardo” Meyer. It had been too long since I had seen Ricardo. All the music was free admission on The Terrace, and pretty much world-class, in a diversity of styles. So we only paid for drippingly-delicious cones from the Union’s famous Babcock ice cream stand, and for burgers and brats at the bandstand-side food vendor.

When we arrived, Emma Dayhuff and the Phoenix Ensemble was in full gear, and providing some of the most incendiary music of the afternoon. The quartet included tenor saxophonist Isaiah Collier, alto saxophonist Greg Ward, and drummer Vincent Davis, led by bassist Dayhuff, who is a PhD candidate in jazz performance at the UW-Madison. She’s already garnered enough reputation to be working this day with leading Chicago musicians Collier, Ward, and Davis. 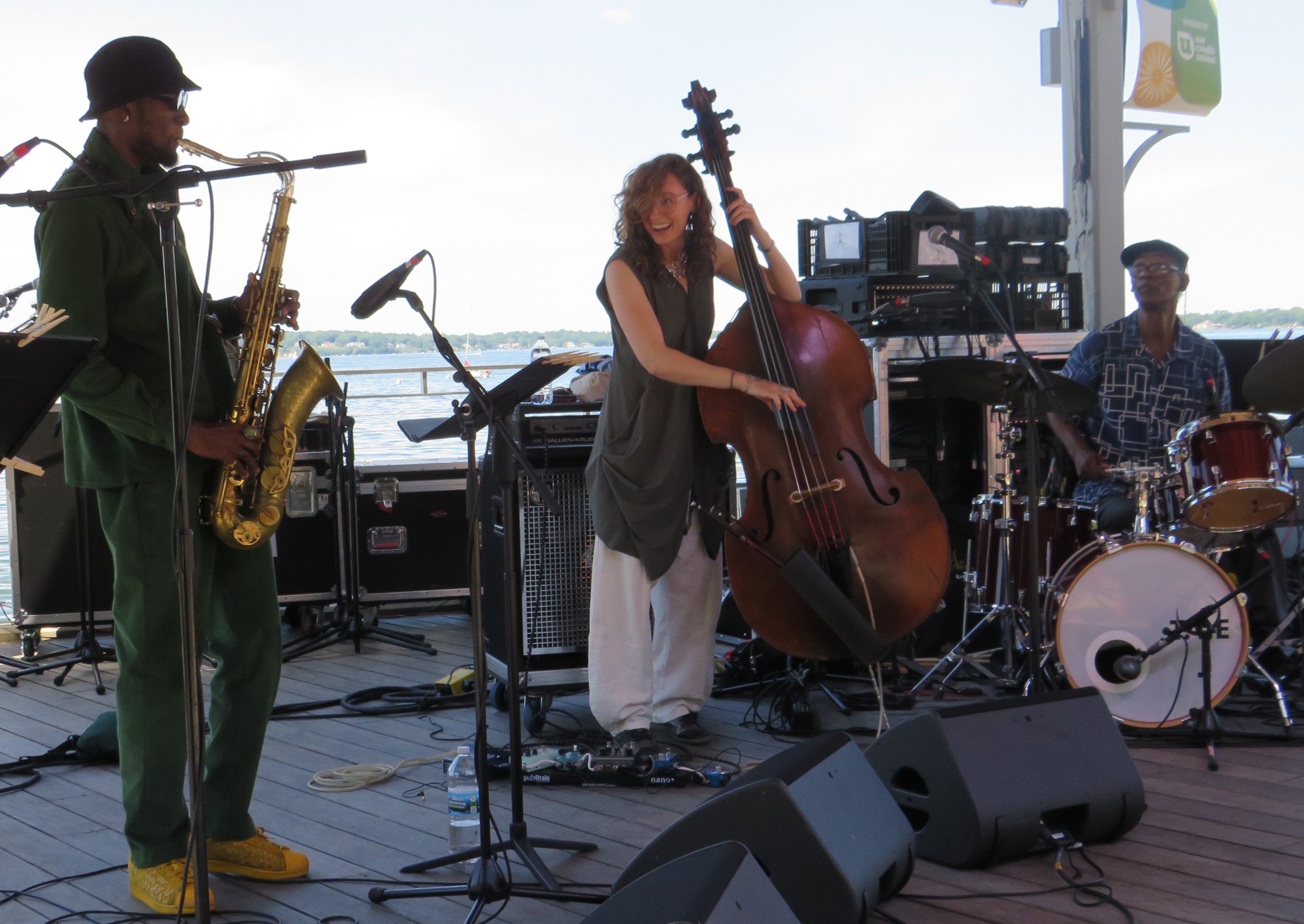 One elderly listener near me grumbled “they don’t have any singer,” perhaps a bit challenged by the extended solos, especially of tenor man Collier. But I assured him that the next act will be led by a singer.

After the break, Twin Cities vocalist Sarah Greer changed the pace and mood decidedly with a blend of originals and standards. She showcased a voice with extraordinary dynamic range, especially on the top end, recalling the extraordinary pop-soul singer Minnie Ripperton.

Then came the band that I knew would be top-notch. It was billed as Sharel Cassity and the UW Faculty Band — Johannes Wallmann, keyboards, Peter Dominguez, bass, and  Matt Endres, drums. 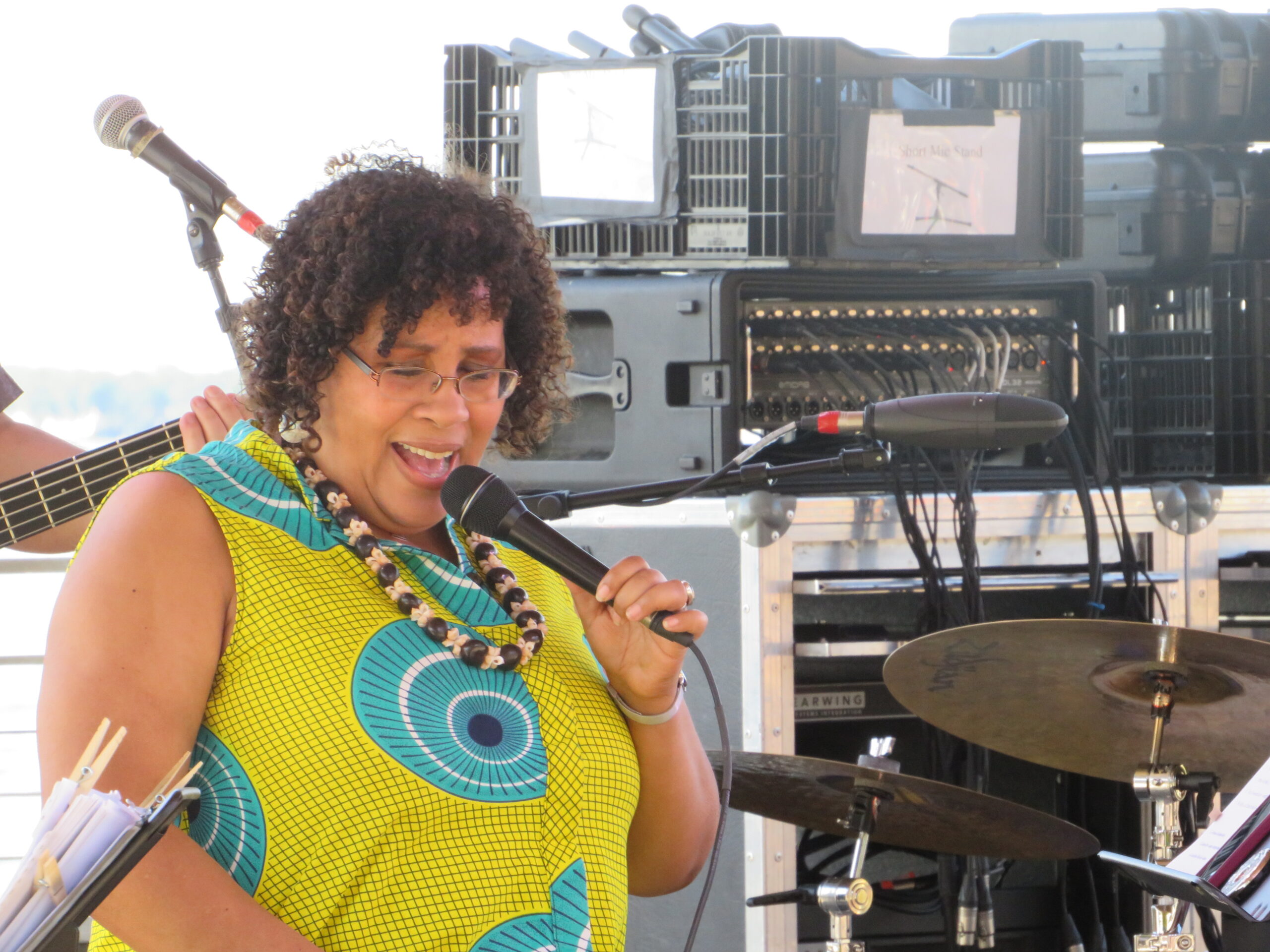 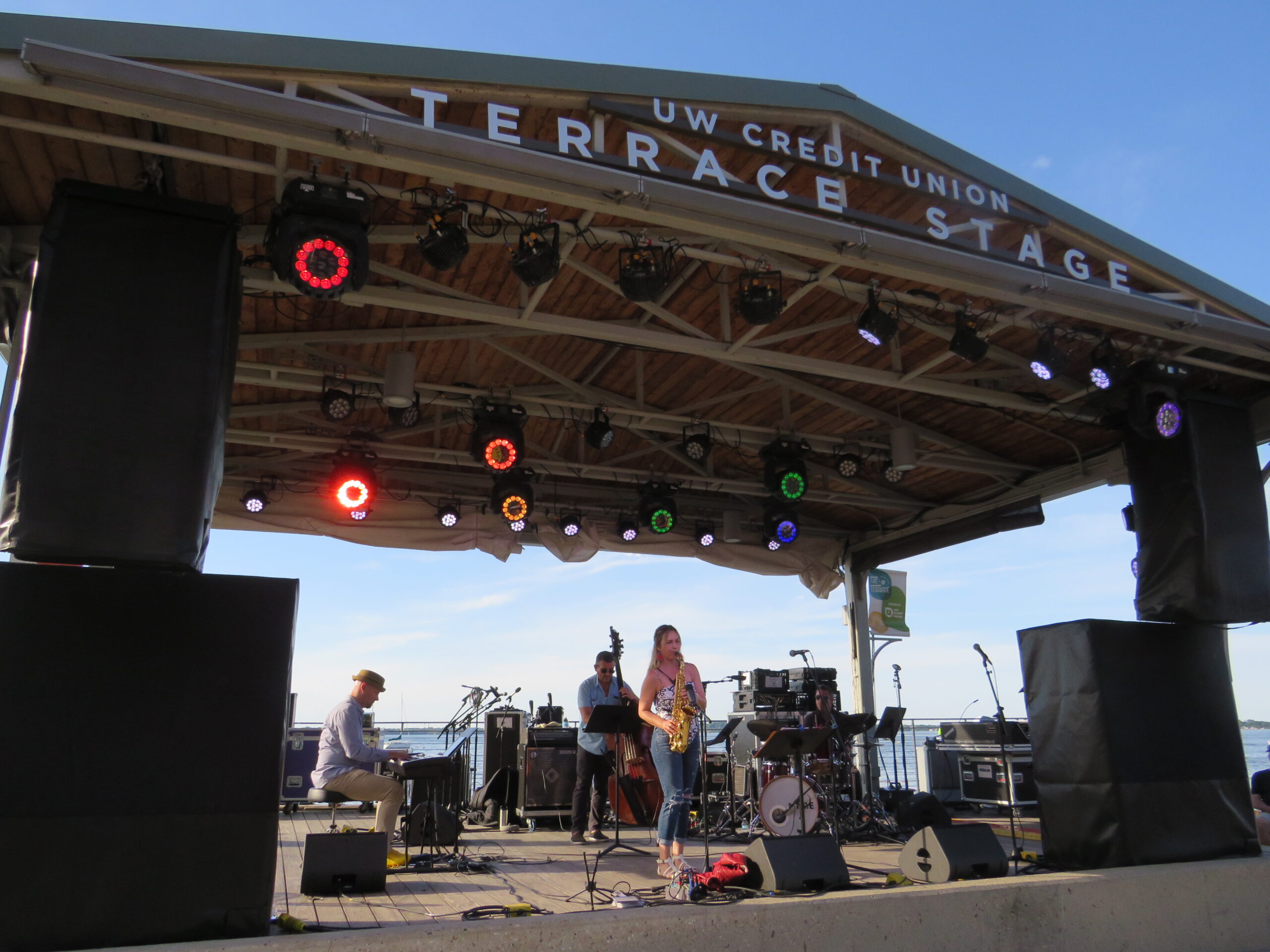 Sharel Cassity and the UW Jazz Faculty Band at the Madison Jazz Festival (above and below.). 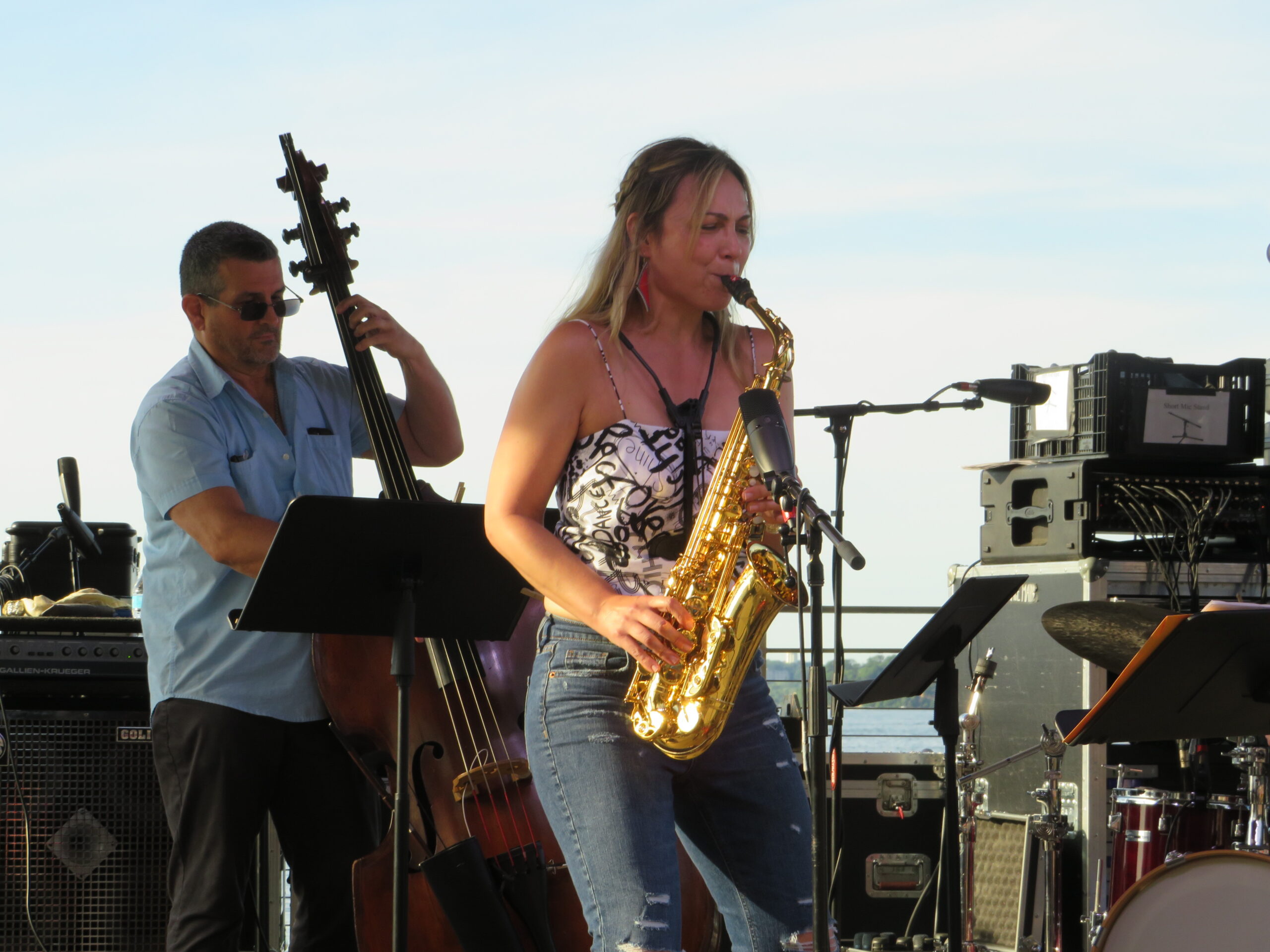 For me, and I suspect many others, the revelation of the afternoon was alto saxophonist Cassity, which is saying something considering I expected Greg Ward to be the top alto player of the day. He’s superb, for sure, yet I didn’t hear all of his set with Emma Dayhuff.

However, between what I’ve heard of Cassity on Precarious Towers, the new album by Johannes Wallmann (to be reviewed on this blog soon), and on this afternoon, her sound and soul are as sundrenched as the day. That’s not to say Cassity’s playing lacks a wide range of shades, shadows and nuances. She has all the chops she needs to express in a soulfully post-bop manner. These days it’s risky to comment on gender, but I can’t think of a better female saxophonist I’ve heard. She’s right up there with the best alto players of any gender.

And despite having a brand-new album of his own to promote, Wallmann was generous enough to allow Cassity the spotlight, as the quartet performed largely her own original compositions from her albums. This gambit hopefully will help promote his new album once people realize that, on Precarious Towers, she’s the horn soloist — in effect, the sonic element catching the sunlight atop those towers. 1

What was most memorable Saturday was when she paused to explain how one piece was inspired by a quote by the Rev. Martin Luther King Jr. She proceeded to recite the King quote: “I refuse to believe that mankind is so tragically bound to the starless midnight of racism and war, that the bright day of peace and brotherhood can never become a reality. I believe that unarmed truth and unconditional love will have the final word in reality. This is why right, temporarily defeated, is stronger than evil.”

She then played her tune “Be the Change” from her album Evolve.

This all had remarkable resonance to me because, just before her set, my friend Ricardo Meyer had revealed to me that he had rejected the draft during the Vietnam War as a conscientious objector. His alternative duty was two years in Mexico doing public service and, while there, he attended the historic 1968 Mexico Olympics. This event is most famous for the occasion of two African-American sprinters, Tommie Smith and John Carlos, raising black-gloved fists in the air during the awards ceremony for the 200-meter dash. Though interpreted controversially as a gesture of black power, Smith later said in an interview, “It was a cry for freedom and for human rights. We had to be seen because we couldn’t be heard.”

Of course, Martin Luther King Jr. had been assassinated in Memphis in March, seven months before those Olympics. In the many years since, the need for the transformation that King envisioned remains a struggle, all the more reason for anyone and everyone to “be the change,” as Cassity puts it. 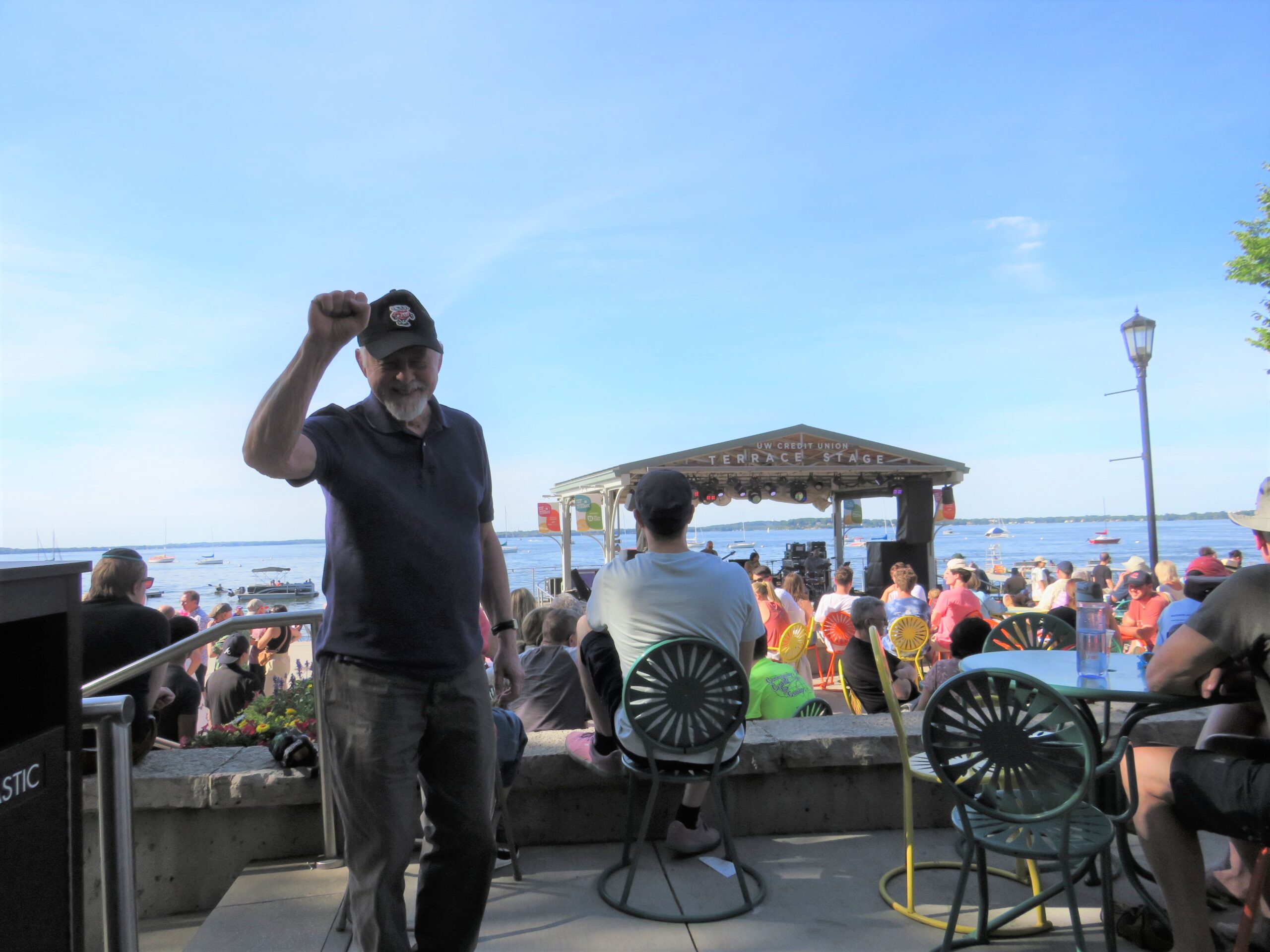 At Saturday’s Madison Jazz Festival event, my old friend Richard “Ricardo” Meyer offered up the fist-in-the-air “for freedom and human rights,” echoing the famous gesture of American sprinters Tommie Smith and John Carlos (below) at an awards ceremony in the 1968 Olympics, which Ricardo attended. The video below documents the occasion. 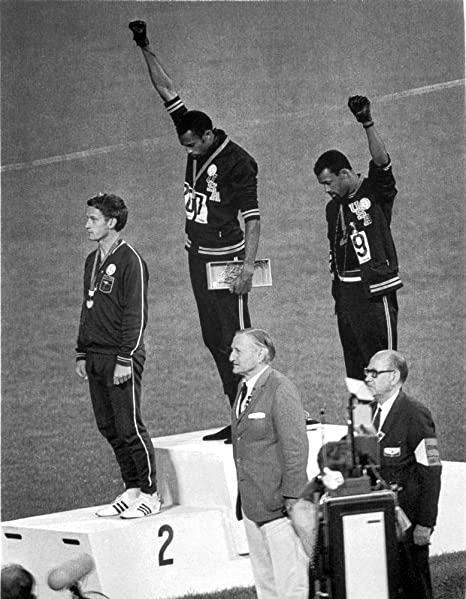 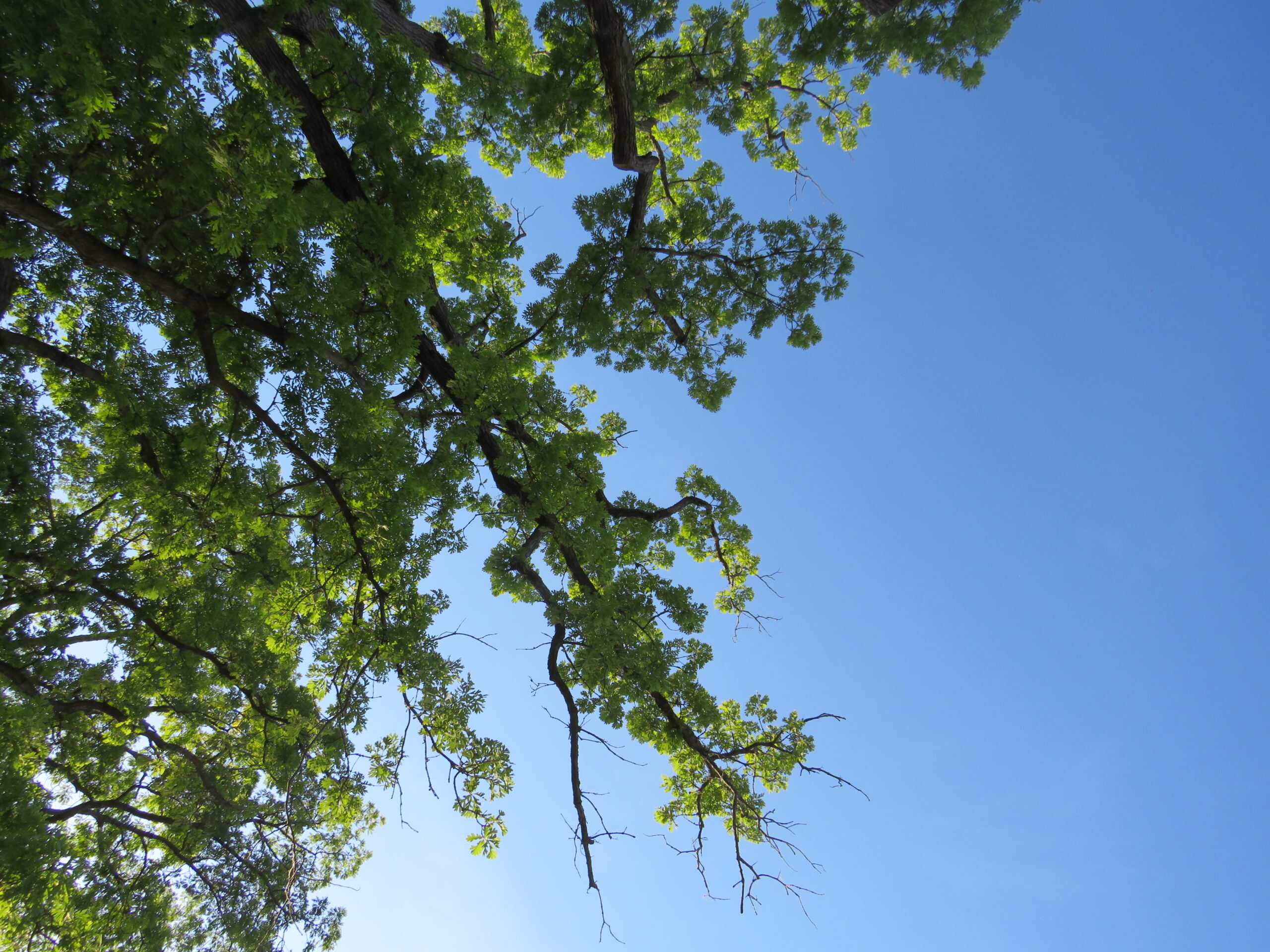 1 A bit of research shows Cassity has plenty of reason to claim a spotlight: From All About Jazz: Listed as “Rising Star Alto Saxophone” in Down Beat Magazine for the past 11 consecutive years (this persistent “rising star” categorizing makes me wonder if she’s butted up against a critical glass ceiling).

“Sharel has appeared on the Today Show, earned her MA from The Juilliard School under full scholarship, won the 2007 ASCAP Young Jazz Composers Award & has been inducted into the Oklahoma Jazz Hall of Fame. Cassity has shared the stage with jazz luminaries including Herbie Hancock, Wynton Marsalis & the Jazz at Lincoln Center Orchestra; as well as mainstream artists Aretha Franklin, Natalie Merchant, Vanessa Williams & Trisha Yearwood. She has released five albums as a bandleader and appeared on over 30 as a sideman, toured 24 countries and performed at leading venues like the Newport Jazz Festival, Monterey Jazz Festival & the North Sea Jazz Festival.”