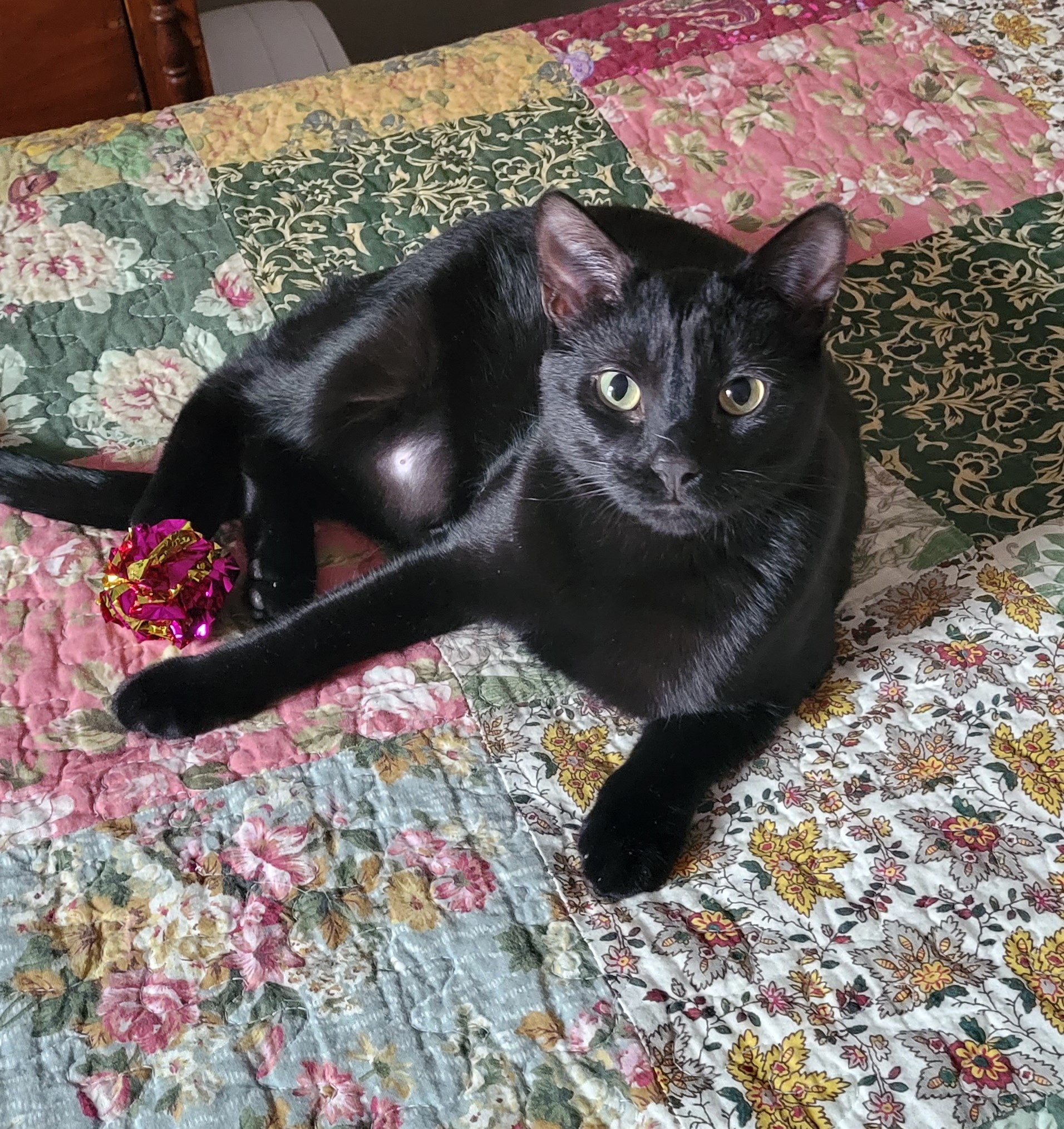 Eddie, before he went missing. Note the mystical third eye of his boy-nipple, and his favorite little red chew-toy ball. Photo by Ann Kathryn Peterson.

This is the story of our missing cat, Eddie. We were sure he was long gone in the wilds of the great outdoors, because we had searched our flat and the basement. Ann had gone down there “at least ten times,” calling his name and shaking cat treats in a container. Yesterday, it had been two weeks since he was missing. Ann, finally able to hold back tears, had pretty much “resigned herself” to never seeing him again, she had said at dinner on our front balcony.

Yesterday’s mini-heatwave prompted me, at about 10.15 p.m., to go down to the basement to retrieve a fan or two. I stored our fans in an ancient canning room in the far corner of the basement. The door creaked open, I walked in, turned the light on and grabbed the chosen fan.

I paused to decide whether to grab another one, and something drew my eye upward. I looked, and there, staring at me was a black cat, two feet from my face, squatting on a shelf.

It was Eddie, his light-deprived pupils as round as little black saucers. We stared at each other for several more long moments. His face had the look of a cat’s nine lives all rolled into one, perhaps courting doom. I was utterly astonished. I can’t recall being more so.

Little Eddie had been trapped in this room for two weeks (to the day)? With no food or water? I was afraid to look closer, thinking I’d find an emaciated body. But I saw his beautiful, sleek black coat intact, and I reached to touch him on the head and neck, which he silently allowed me to do.

At this point, I needed to tell Ann as she can handle cats much more deftly than I, especially with my lame left hand. He was clearly very scared. I didn’t want him jumping out of my arms and go running in the basement. I closed the canning room door but left the light on, so he knew we’d return.

Ann was already in bed. When I got upstairs I said, “You’ll never guess what I just found.”

Clutching Eddie to her breast, Ann carried him upstairs, beside herself in amazement and joy. He had a dazed expression on his face.

The other two cats knew something was up even though Ann took him straight into our back cat room and closed the door. They lurked and peered at the door.  What proceeded was about 15 minutes of all her kitty-kat talk, ranging from baby cooing and goofy, sweet nothings, to adoring chastisements, to her comically fake “man’s voice,” used when playfully teasing a cat.

I sat outside on a kitchen chair listening with warm befuddlement and gratification, over what had just happened. Eddie wasn’t eating any of the dry food in the cat room so I fixed up a heaping helping of squishy cat food and before long he was chowing on that and, Ann reports, rubbing against her body frenetically, and then rolling over in apparent happiness.

Ann decided to sleep on the floor with him, a courageous thing to do giving her arthritis. I went to sleep eventually and woke up early in the morning, to Ann asleep in bed next to me and Eddie walking around the bed, around my head, his ultra-long black tail lilting and flailing between it us like a charmed and intoxicated cobra. Then he flopped down between us. Unlike most cats, who knead and then settle into a space, Eddie just flops.

On the advice of her sister Caryn, Ann contacted the vet, who was able to get Eddie in for an examination this morning. He was indeed dehydrated, but not seriously so. He received IV fluids and will have a return visit in a week.

Eddie’s lucky he’s still young (less than a year), and as well-fed and nurtured as he had been. He typically would also eat from the other two cats’ foods dishes in a given meal hour, and has grown by leaps and bounds, literally. He’s lucky. too, being a slender cat. The vet explained that obese cats, when they get dehydrated, can have a reaction in their stored fat that actually threatens them.

I now recall Ann saying to me a number of times as we speculated about Eddie, after her numerous searches: “One thing I know. He’s not in the basement. And if he is, he’s dead.”

Cats are delightfully and confoundingly amazing creatures, in so many ways. How he got trapped in the small dark, dank room remains something of a mystery. My astonishment over Eddie’s two-week odyssey into cat hell remains, fresh and vivid as a nightmare, finally awoken from.