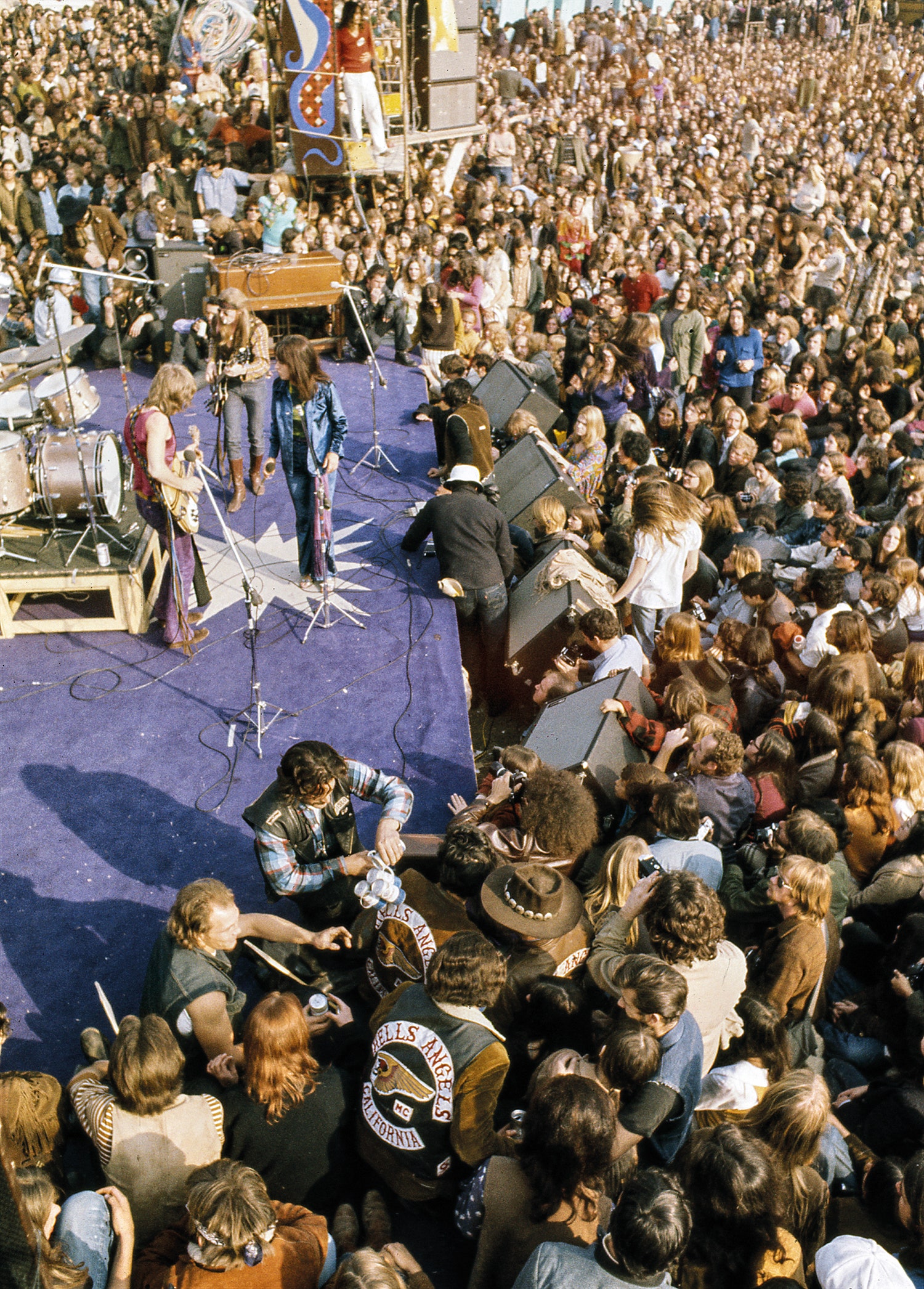 The situation begins to deteriorate quickly during a Jefferson Airplane performance which preluded the death of five people later at the infamous Altamont Motor Speedway concert. Photos courtesy The New Yorker
I just came across this video of Jefferson Airplane, which is illuminating and demonstrative in two contrary ways. The first is how it shows that Jack Casady is, in my book, the greatest bass player in rock history (as an ensemble player he exceeds Jack Bruce, perhaps a better improviser). It still amazes me how the propulsive power and rhythmic acumen of Casady’s playing drives this group. I think you can also feel how his bass intoxicates festivalgoers, along with some illicit drugs. His decades-long synchronicity with lead guitarist Jorma Kaukonen is also evident (The two went on to form the longer-lasing blues-roots duo Hot Tuna.) 1 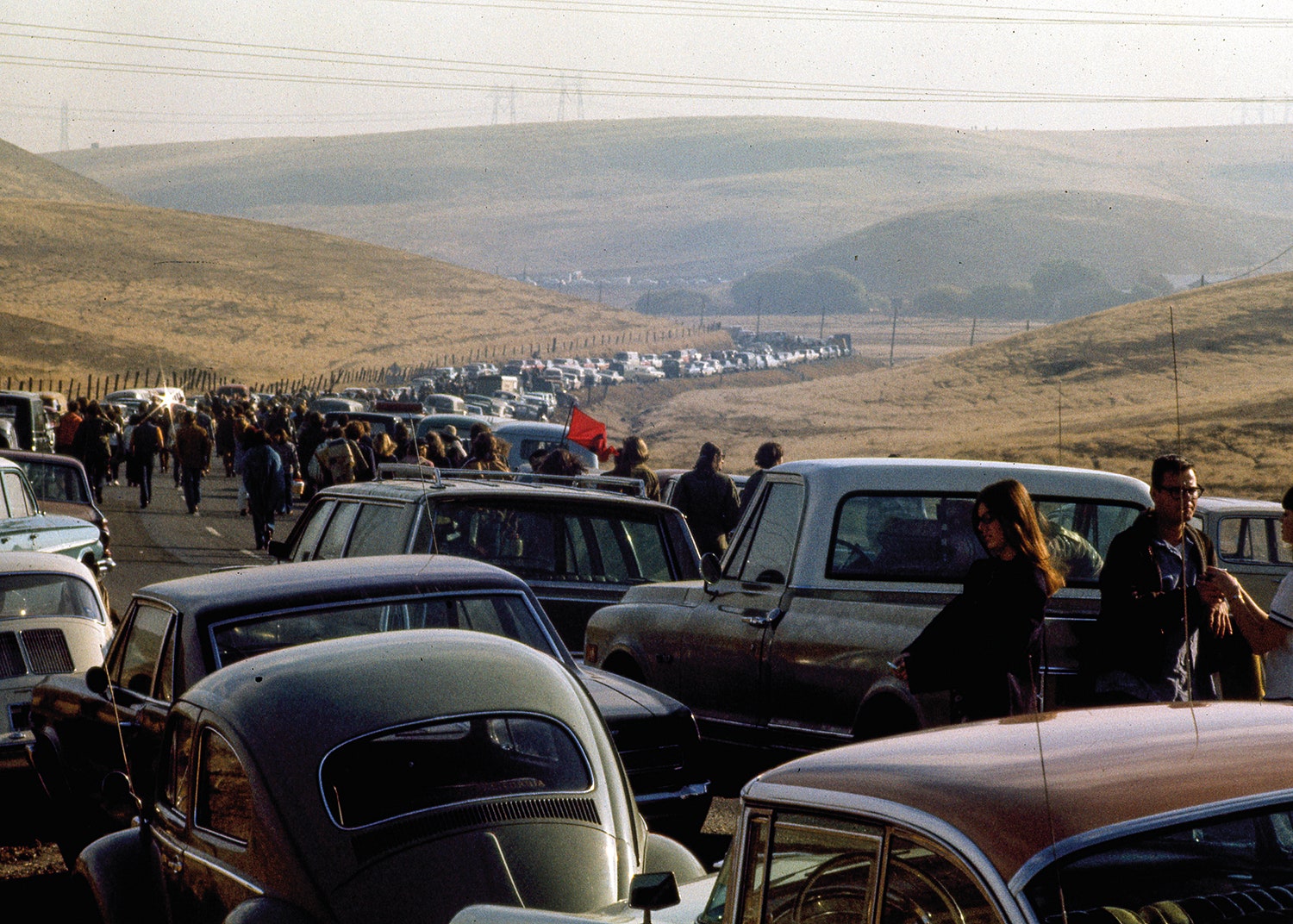 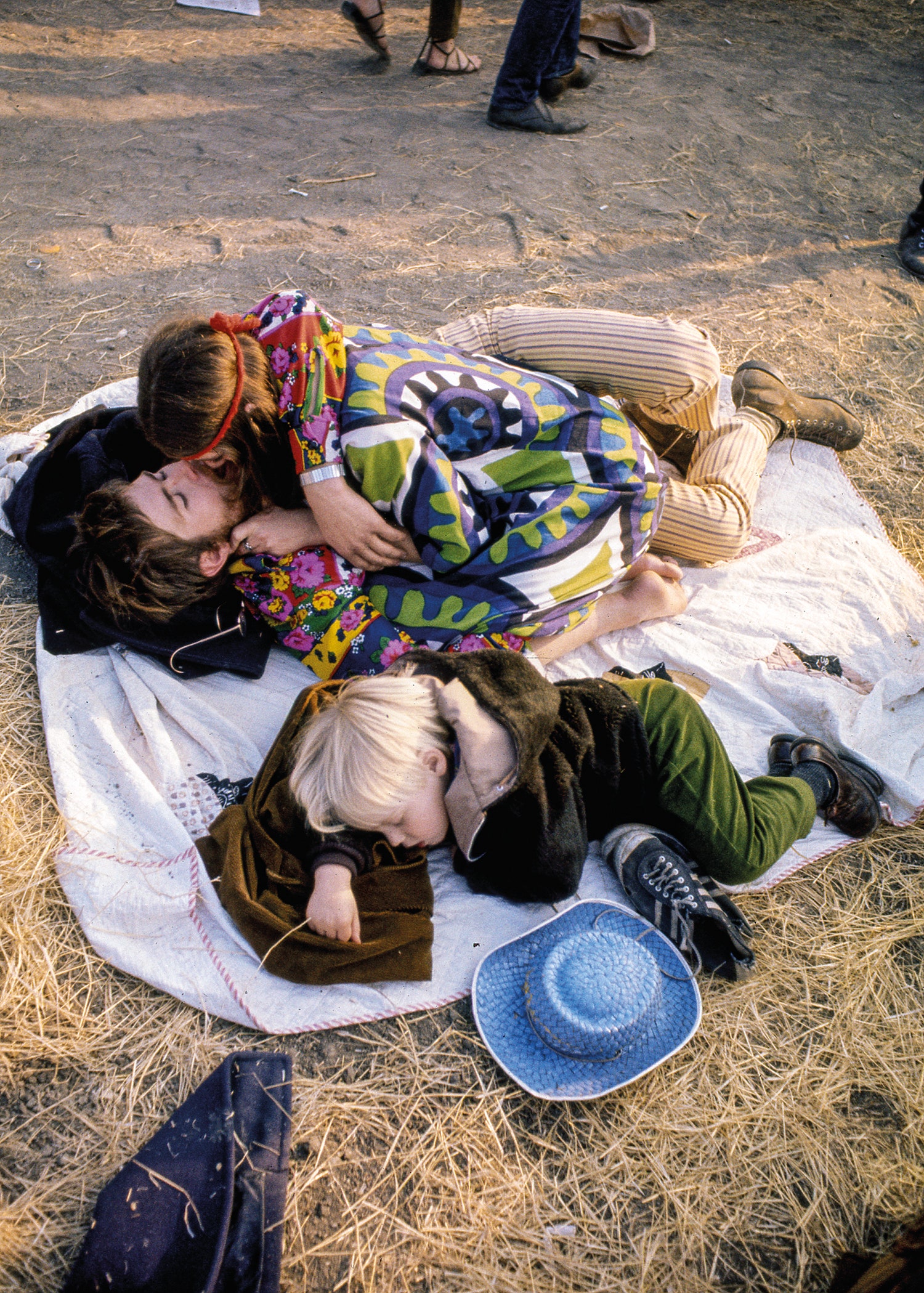 The photos above of Altamont suggest how extraordinary these
live outdoor events had become for my generation, especially in that critical year of 1969. I make that claim with deeply bittersweet sentiment. That’s because the second demonstration of the video is the sad and ugly one.
This was at the Altamont Motor Speedway Free Festival, which later in the evening turned deadly when Hells Angels killed at least one audience member during the Rolling Stones performance. 2
Here we see things not quite that bad. But the photo at top reveals a perhaps under-discussed aspect of the problem. The San Francisco-based Airplane, which had gained enormous popularity in the previous couple years, is on a small bandstand barely above ground level, and easily accessible by members of a crowd of stimulated young people that probably numbered several hundred thousand.
What we have here is a failure to plan properly. I mean this was a  “free” festival, for crying out loud. Other concert planners had been overwhelmed by the gargantuan crowd in rural Woodstock ,a short time earlier, so something should have been anticipated, even if Woodstock was a truly peaceful event.
In the video we see particularly the efforts of the band’s lead singer Grace Slick (and singer-guitarist Paul Kantner) in trying to get things under control, in her own inimitable way. Slick cajoles for calm, then points out that, even though Hells Angels are the heavies here, people in the audience are also getting out of hand by scrambling on stage.
It was the prelude to what many declared the death of the ideals of the Woodstock generation. Those ideals hardly died that night, but they began to face up to the harsh realities of life in America, as it teetered like a troubled neurotic between the Man in the Gray Flannel Suit complacencies of the 1950s and the Revolutionary 1960s. The Airplane, of course, embraced the later ethos with almost desperate heroism in their album Volunteers, released only months after Altamont. There’s very telling irony in the song the band was playing in this video: “The Other Side of this Life.”
Because of the visible violence, the video is age-restricted:

2 For a far more in-depth piece on this event here’s an essay from The New Yorker: https://www.newyorker.com/culture/cultural-comment/the-chaos-of-altamont-and-the-murder-of-meredith-hunter