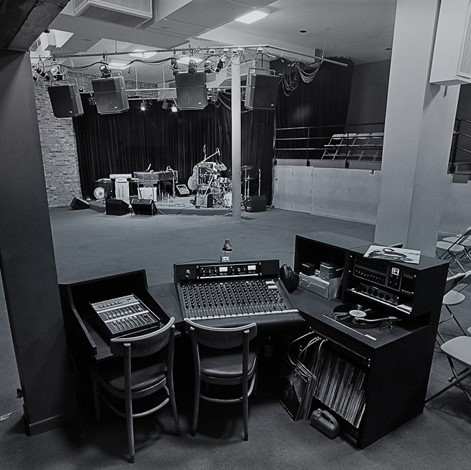 The interior of the Amazingrace nightclub in Evanston Il. during the 1980s. Photo by Charles Seton

Editor’s note: In response to my blog about celebrated pianist McCoy Tyner’s recent passing, I received from guitarist Jack Grassel this remembrance of an extraordinary experience we had when we attended a Tyner concert in the mid-1970s. Here is Jack’s remembrance, slightly edited.– Kevernacular

When I heard that McCoy Tyner was going to play at Amazingrace in Evanston, I called my friend Kevin Lynch to go with me.  I said “I’m going to play with McCoy Tyner tonight. Kevin just said. “OK”.  Rather than leave the guitar in the car, I had it in a gig bag on my back.  When we paid the cover charge at the door, the grouchy bouncer said, “why do have the guitar?”

I replied, “I’m going to play with McCoy Tyner tonight.”  He laughed sarcastically.  We went in and sat in the front row in front of the piano.  All the instruments were onstage.

Kevin said, “Jack, why don’t you write a note of introduction and have it sent back to him?”  I did exactly that. Then we went down to the cafeteria to get a bite to eat and McCoy was sitting at a table eating ice cream next to some empty chairs.  I introduced myself and said “I’m the guy who sent the note.”  McCoy said, “have a seat.”  We sat down and had a great, long conversation about music.  Then his manager came to tell him it was time to play. I said, “May I play with you tonight?”  He replied, “Get your amp and put it near the front of the stage, we’ll play a tune and if everything is cool, I’ll motion for you to come onstage”.  So I got my amp and set it on the floor next to the stage.  The band had drummer Eric Gravatt, three horn players and a bassist.  The big grand piano was pushed up next to the wall on its left side. The band started to play and it was burnin’.  When they started the second tune, McCoy motioned for me to come onstage and play.

zThere wasn’t much room onstage. so I had to squeeze between the horn players to put my amp behind them next to the piano.  I couldn’t find an outlet to plug the amp into, so I got down on hands and knees to crawl under the piano to get to the outlet on the wall.  That was amazing to be under the piano with McCoy pounding violently on it.  Thinking everything was cool after plugging in my amp, I crawled out from under the piano to locate my guitar.

Three big, strong bouncers including the grouchy guy at the door lifted me up into the air and carried me off stage and held me against a wall with my feet off the ground.  I looked down at the bouncer in front of me demanding what I was up to.  I said, “he said I could play with him”. Then I pleaded to the stage hand to get these guys to let me down. He got McCoy’s attention and pointed to me. McCoy motioned for them to let go.

I walked out onstage and Kevin had gotten my guitar out of the case and handed it up to me. All this time, I had not listened to the song they were playing.  All three horn players had already soloed while this battle with the stage hands had been going on.  So I wasn’t prepared when I had just turned the amp on, plugged in the guitar when McCoy yelled out, “take it Jack!” 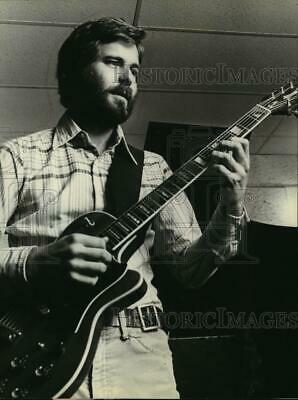 Guitarist Jack Grassel in 1979. a few years after playing with McCoy Tyner. Courtesy Pickclick.com
I started to play, using my perfect pitch to identify each chord McCoy dealt me. After a few choruses I had figured out the song form, all this while I was soloing.  I played the best I could and when the song was over. McCoy didn’t tell me to leave the stage.  I finished the set with them giving me solos.  When the set was over, everyone went back to the dressing room.  McCoy had the money and paid each guy a hundred dollars.  Everyone complimented me on my playing.  Mr. Tyner told me to send him a cassette of my playing. I thanked them for letting me play. I walked out onstage to pack up my guitar. I had my back to the audience and a crowd had formed behind me.  When I turned around people were saying things like “Who are you?  Got any records out?  are you in the band?”  I felt like a star for a moment. Kevin and I went out to the car and drove home having had our minds blown by this adventure.
This happened at a time when I was trying to find my own voice on the instrument and before I recorded my first record Magic Cereal. I never had any recording that I felt was good enough to send him. And then a year later he came out with a record where he played duets with a bunch of guitar players. I also realized that perhaps I didn’t play the right instrument to pierce the dense wall of sound that Tyner was creating.  I also didn’t feel like going on the road. I like being at home, getting a good night sleep, exercising and eating what I want to eat and practicing all day which are things that are not possible being on the road with a band.
A few years after this event, I was talking to pianist Buddy Montgomery who was playing at a little corner bar in the ghetto of Milwaukee, playing to three people besides me.  I said, “Buddy what are you doing playing in this dump for four people?”  He replied,”It’s about the music.  Did you hear what we just played?  That was some great music. I’m very happy.”  So these were among the many lessons I’ve learned, that it’s about the music, not the money, not the adulation, not the fame.  It’s about the music.
— Jack Grassel
_____________