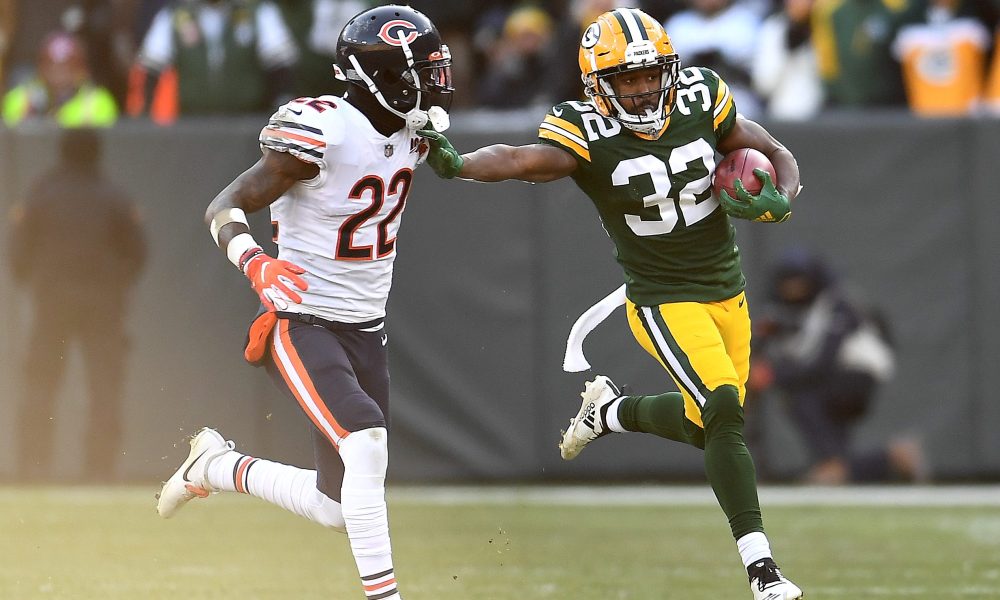 Packer kick returner-runner-receiver Tyler Ervin. courtesy Getty Images
Yeah, I could stomp on the Packers when they’re down, like most are now. But an old die-hard fan/friend requested “words of solace” from me, so here’s how I responded:
John,
First a big sigh. Letting the dark winds of disappointment and pain escape a bit more. Whew!
I liked the Packers’ apparent poise under duress (see 2nd half rebound) but they should’ve acted more aggressively sooner — on the first drive which ended 3 & out. I would’ve thrown a play-action deep post, on the first play.
So by the end-of-the-half pick, it was a duck in a shooting barrel.
OK. I have faith in Gutenkunst, but more in his free agent dealing, so he might find a fast, quick inside LB, maybe another TE.
The draft class is loaded with wide receiver talent, so someone should stick and help this time, preferably a guy who does 4.4 40 or less.
Here’s a thought nobody’s addressed. Despite his dopey bounce-off-the-face mask muff, I think Tyler Ervin has comparable potential to Niners’ Raheem Mostert, who was mainly a kick returner till coming to SF, and took a long time to bloom. But Ervin I think has even more previous experience as a RB. Check this from Wiki:
“In his redshirt senior season of 2015, Ervin rushed for a single-game school record 300 yards against Fresno State (Davante’s school) and for 263 yards against New Mexico.[7][8] In the 2015 Cure Bowl, his final collegiate game, Ervin got his longest career punt return touchdown, for 85 yards in the Spartans’ 27–16 win over Georgia State.[9] He finished his senior year with 1,601 rushing yards on 294 carries with 13 touchdowns and 45 receptions for 334 yards with two touchdowns.[1] Along with first-team All-Mountain West Conference, Ervin earned multiple national honors, the Athlon Sports All-American second team and his second straight Sports Illustrated honorable mention All-American title.[1]”
The Packers remain a step behind San Fran in scheming as well as team speed. I think they’ll prioritize those gaps in the off-season. They have at least one extra sixth-round pick from the trade to Oakland of KR Trevor Davis. I think the Packers have more room for improvement than SF, and will be better & deeper next year, though maybe not as lucky injury-wise.
A-Rod sounds quite optimistic, even after a nasty loss. Eliminate the turnovers next time, get a few yourself (they should’ve stripped Mostert at least once — I know they have to touch him first (ha), but with all those carries!) and it’s another ballgame. The desperation bomb throw Sherman picked at the end hardly counts, it was incomplete anyway.
Restrap you’re cheesehead helmet, and buck up. Me too!
The grass is always greener, and golden, on the other side.