Outside of classical circles, astringent might describe a string trio. But once you hear Stephan Crump’s Rosetta Trio, especially in person, such austere implications melt away into pools of concentric counterpoint, and welling surges of warm passion. The passion and warmth radiated primarily from the bandleader Crump and his buoyant, enveloping bass-playing at center stage, Saturday night at the Jazz Gallery Center for the Arts. The bandleader seems to possess an innate but well-cultivated musicality and soulfulness, even as it vibrates at a slightly more subtle, lower dynamic level then his two guitar-playing band mates. 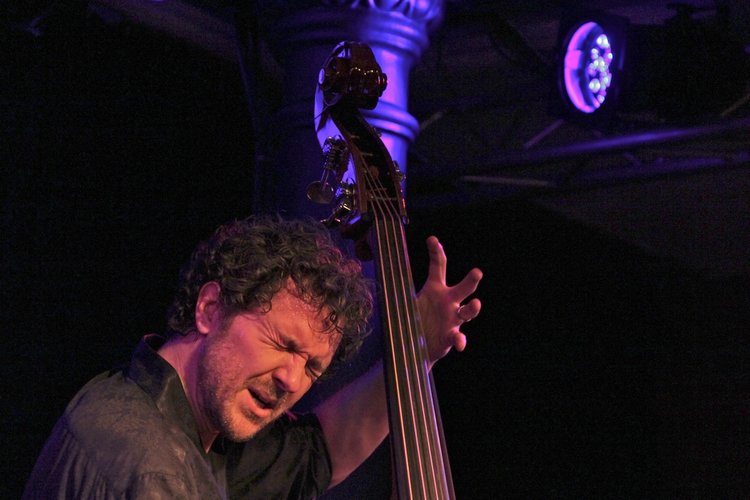 Often Crump seemed to talk or sing to his bass, to spur it to some higher level of communication. For one tune, he literally used the big, upright bass as a percussion instrument, slapping various parts of its wood body, and zinging sharp effects along the side of the instrument’s neck.

That tune was called “Rose,” named for one of his formative artistic inspirations, a woman he knew in his early years in Memphis, Tennessee. The group may even be named for her.

This piece had strong country overtones embedded in its modern overall style, bringing to mind the atmosphere plectral magic of Bill Frisell who coincidentally played the night before not far south in Evanston, Illinois. Considering I almost attended the sold-out solo Frisell event (with tickets ranging from $25 to $55), I daresay I got more for my money Saturday with the Rosetta Trio, especially in the intimate setting of the Jazz Gallery, amid a too cozy-sized audience.

These are all world-class musicians, with Crump best-known as one of the formative members of the celebrated Vijay Iyer Trio, and with credits ranging as far afield as Portishead’s Dave McDonald and The Violent Femmes’ Gordon Gano. Yet Crump has been so dedicated to his personal vision in this form that this trio has soldiered on for 15 years in its exact same configuration of players. The guitarists are Liberty Ellman – well-known for performing with an array of progressive jazz artists, including Pulitzer Prize-winning saxophonist composer Henry Threadgill, Wadada Leo Smith, Gregory Porter, and Jason Moran – and the somewhat less-renowned but no-less-talented Jamie Fox.

In this group, Ellman dedicates himself to acoustic guitar with subtle and sparkling elan, while Fox handles the hollow-bodied electric duties with great aplomb. What’s also impressive about this group is, for all the virtuosity and conceptual sophistication, there’s an unassuming humility to their presence, especially in Crump’s almost shy-but-eager way of sharing anecdotal information about each tune. This lent the music a human aspect even as it sometimes veered into the abstract, as it does with several tunes by Ellman, the most-overt intellectual in the group.

But what consistently engages listeners is the interplay among the players, most conspicuously the delicious array of contrapuntal felicities rising from the two guitarists together, riding Crump’s fulsome bass.

It was perhaps most purely engaging on the bandleader’s tune “He Runs Circles” inspired by his young son’s “eloquent” manner of literally running circles around his father when he practiced. The evocative effect of the three musicians here was an infectious three-part swing that almost prompted at least one audience member to dance circles around the trio. Here and elsewhere, the group engaged the body, heart and mind with music as stimulating as it was sometimes challenging.

If you have a chance, don’t miss this group, which happily presses on like slightly covert Robin Hoods – taking from the richness of both vernacular and art musics, and giving back to the musically hungry fortunate enough to cross their path. That artistic realm is encapsulated in the title of their latest abum, Outliers.

Stephan Crump’s Rosetta Trio has just embarked on an extensive Midwest tour in support of Outliers, so check out their website for a concert near you: Rosetta Trio tour