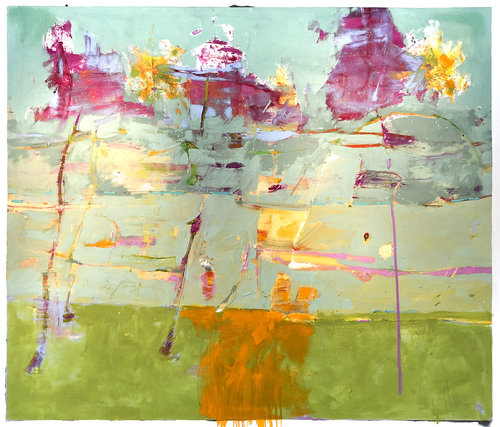 Terrence Coffman: A Compendium of Paintings, through July 7 at:

What color is Zen? Wisconsin painter Terrence Coffman seems to know. He ostensibly treads in abstract expressionism’s historical modernism. By contrast, the state’s most notable art tradition stems from the great Midwest regionalists, including Wisconsin’s adopted son, John Steuart Curry.  Accordingly, most of the state’s dominant art trends have interfaced with the state’s abundant natural resources, including the architectural giant Frank Lloyd Wright.

In that sense, Coffman fits in, in a sidelong way. He even denies doing abstractions. His paintings, on display at Tory Folliard Gallery through July 7, represent “landscapes of my inner being, my attempt to move into a greater reality … I’m a conduit of sorts. I don’t stand before a subject to copy it. I breathe it in, consume it and let it flow through me on to canvas.”

That sounds grandiose but he’s striving for, and far beyond, the indigenous terrain, saying he draws from Zen disciplines of China and India. The result: painterly evocations of the highest order.

Coffman, who served as president of the Milwaukee Institute of Art and Design for 20 years, meditatively “breathes in” aspects of intensely atmospheric landscapes, or townscapes of Jefferson, WI, his residence. The exhalation effect resembles California color-field abstractionist Richard Diebenkorn who, like Coffman, employed landscape-derived subject series and, atypical to New York abstract expressionists, often in pastels. Coffman has a similarly stunning gift for conjuring beauty that sometimes disappeared in the brawny abstract-expressionist process.

Coffman does embrace that movement’s grand tradition of large-scale paintings. And yet, the eye-drowning 72-by-84 inch “Gail’s Garden 10” is something of an extreme “close-up.” It recalls ab-ex pioneer Arshile Gorky’s approach of literally diving his face and nose into a garden, to blur his focus but intensify his sensory experience. So we see here two giant rose-like stems and blossoms, and the canvas divides into three large horizontal segments akin to layers of earth, yet they’re all sun-lit in pastel tones. Horizontal streaks effect a weird suspended feeling. Along with such perceptual sleight-of-hand, you also detect small graphite scribbles, suggesting germinating seeds. 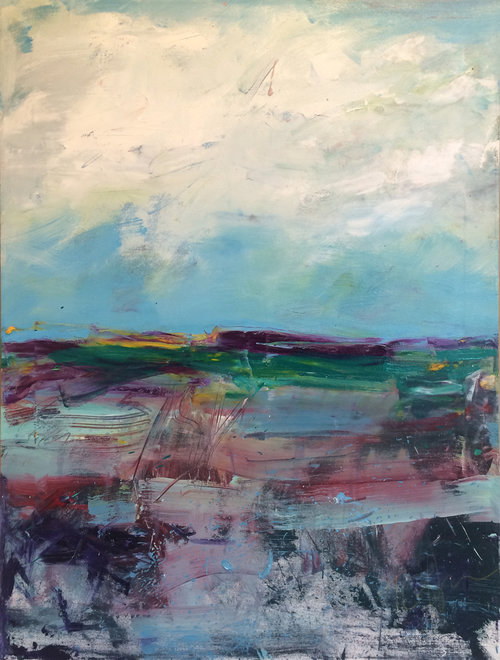 These slight effects help distinguish Coffman from typical abstract expressionism. He also does very small-scale paintings, demanding fine techniques. So even his biggest canvases reveal miniscule spatters of paint, like a Jackson Pollock “mini-me” standing between his legs. But he’s nobody’s knock-off. Coffman also wields storytelling emotional power, in his two “A Long Way from Home” variations. In Number 4 (above), white clouds chill the spirit; the terrain seems like psychic mazes that might circle him back where he started, a classic nightmare.

This review was originally published in The Shepherd Express: SE Coffman review