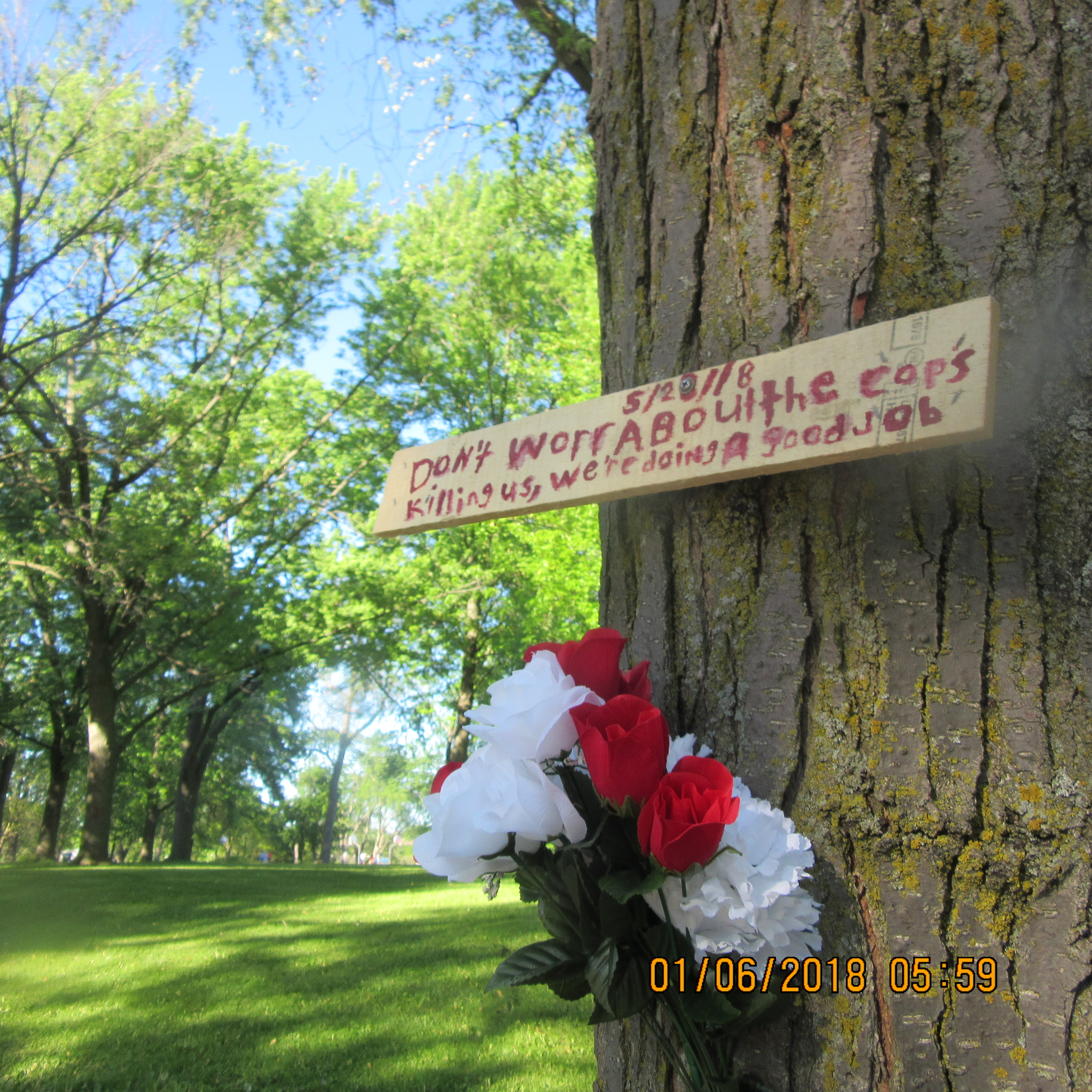 This small memorial was attached to a tree in Riverwest Milwaukee’s Kern Park, after a fatal shooting on Memorial Day. Photo by Kevin Lynch

I’ll get to the city’s latest national exposure for its most recent police brutality and no, it doesn’t have to do with Sterling Brown. But first, this blog strives to take a larger perspective on things like brutality in the big city. I would note a sad and tragic counterpoint to such nastiness, provided by a person who posted a trenchant memorial to a man fatally shot Monday during Memorial Day picnicking in Kern Park in Riverwest, the neighborhood where I live, and a few blocks away from where I type this post.

I truly do love the hip, diverse and gracefully lived-in Riverwest neighborhood, and have celebrated it on this blog. I have resided here for the majority of my adult years in Milwaukee. But I do not want to idealize the neighborhood, rather underscore that Riverwest is part of the real world.
This homicide, which remains an open case with no perpetrator yet caught, occurred in a park that I enjoy and partake of. I frequently go to Kern Park to take its walkways down to  scenic, meandering Milwaukee River pathways. I also sometimes enjoy shooting buckets at the basketball courts faintly visible a ways beyond the “memorial tree” (depicted at top).

Witnesses say they saw the victim, Juan Bernal, on the basketball courts –- when they heard gunfire at around 2 p.m. Monday, Memorial Day.

“Everybody disappeared from the basketball court. He came running across the park and that’s when he fell on the street,” said Janelle Bentson, a witness told Fox 6 news. 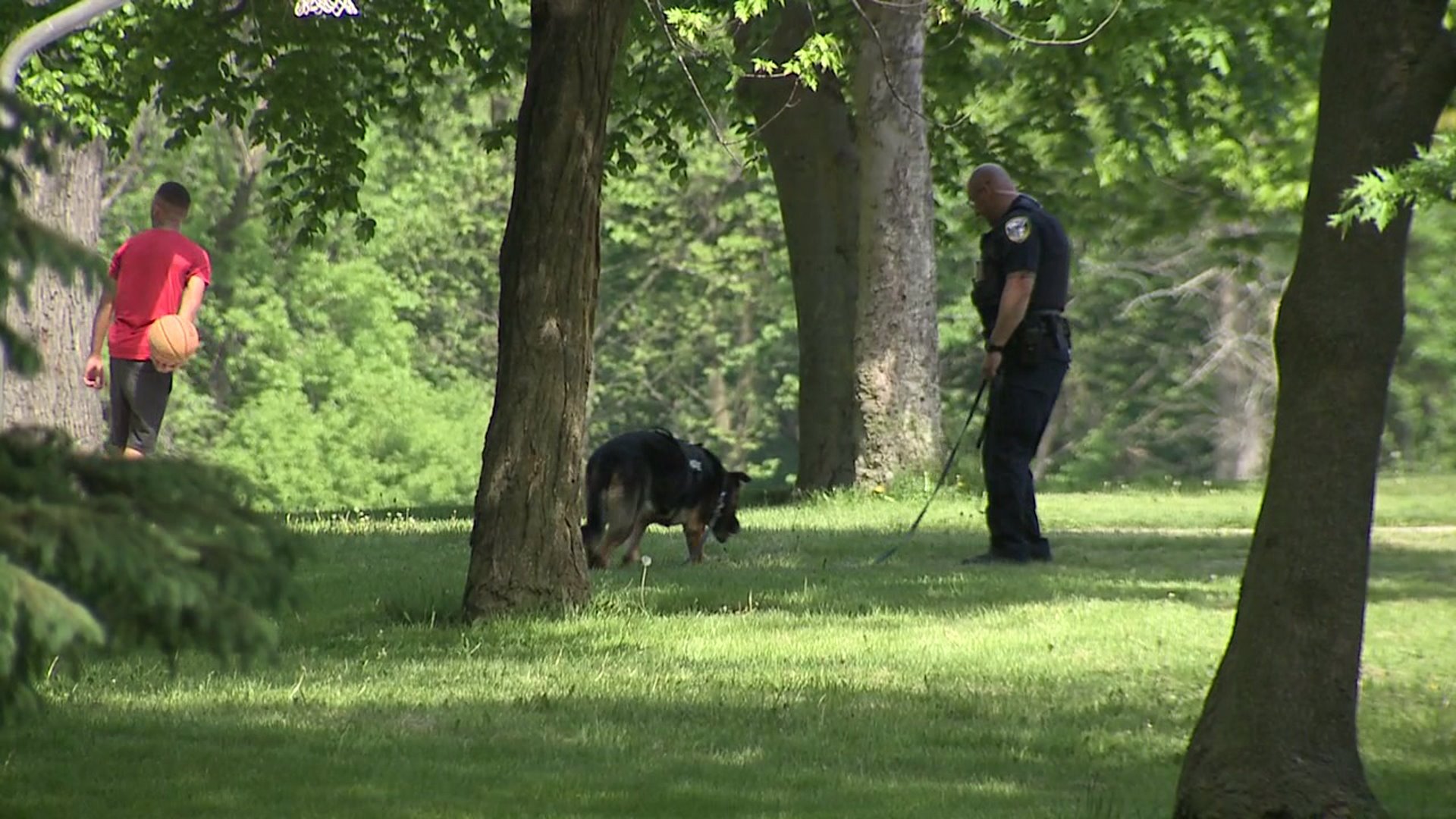 An officer and police dog investigate a fatal shooting near the basketball courts in Kern Park in Riverwest. Photo Courtesy Fox 6

Along with flowers, the anonymous memorializer attached – to a tree near where Bernal fell – a small piece of wood, dated “5/28/18” and bearing the handwritten comment: “Don’t worry about the cops killing us, we’re doing a good job.”

The sign appears to address the issue of so-called “black-on-black” violence, part of the larger urban social fabric in America that’s badly torn, and abused and exploited by the institutional racism of Wisconsin’s judicial and prison system. Statistics show that people of color are arrested, sentenced and imprisoned in this state at rates that far exceed the national norm.

Here’s a story that includes comments from the family of 21-year-old Juan Bernal, described as “a poet, a rapper, a teacher and a mentor,”: family speaks out 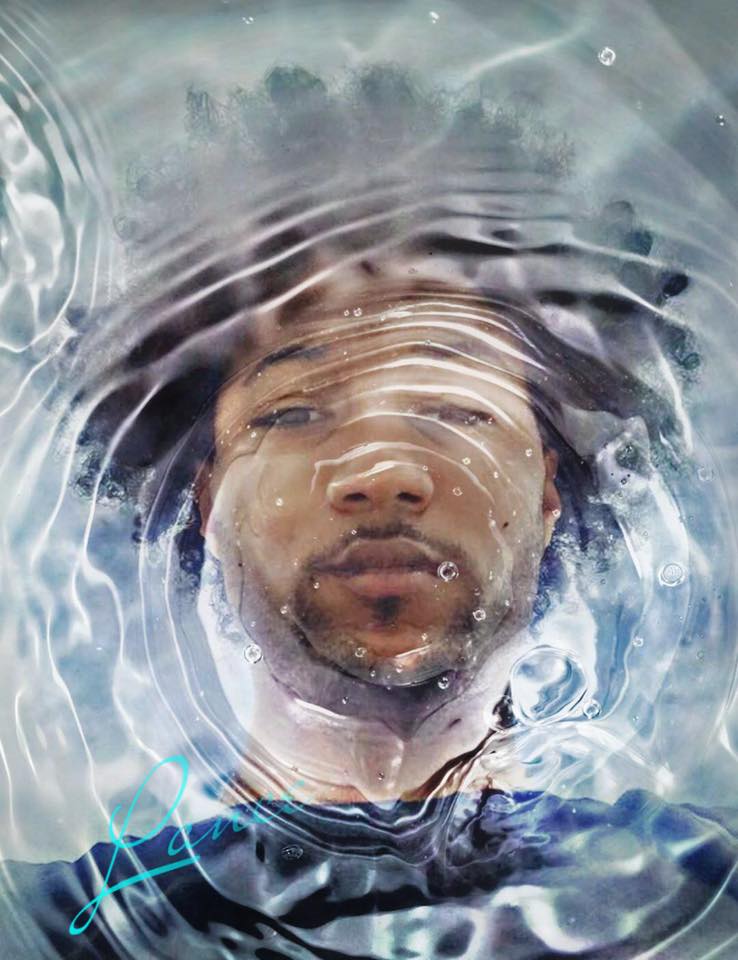 This haunting photo of the late Juan Bernal was posted on his Facebook page on May 30th, two days after his death. Courtesy Lance Allen 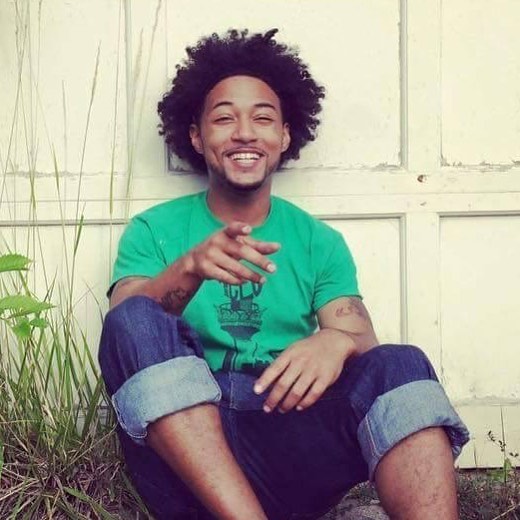 And this photo of Bernal is courtesy of Milwaukee musician Jay Anderson. Thanks Jay, for this beautiful image.

As a Wisconsin and Riverwest resident, my heart aches that the Kern Park incident provided another sort of memorial that expands the sober implications of the holiday, like a steady trickle of blood, that never seems to end.

Is it too early to judge what prompted this police brutality in the video below? the Milwaukee Black Panther spokesman addresses the issue succinctly. The video does not show the black youth’s alleged attack on a police officer. You do see him punched twice by Wauwatosa police, and arrested.

“Call my mama, bro! Call my mama, bro!” the youth repeatedly calls out while on the ground and handcuffed behind his back. It hardly seems like the behavior of a person feeling guilty of something. The youth – who allegedly helped cause a disturbance at Mayfair Mall – was released a short time later. After internal investigation by the Wauwatosa police department, no officers involved in the mid-May incident were disciplined.

Unfortunately the disturbing incident again visited national television attention upon Milwaukee this morning on AM Joy on MSNBC.

“There are 18,000 police departments and no national standards for policing in America,” commented Paul Butler, a law professor at the Georgetown University Law Center, also a former prosecutor and the author of Chokehold: Policing Black Men. “As President Obama says, many young men come into the job with a warrior mentality, rather than a guardian mentality.”

“And the president sanctions excessive force,” host Joy Reid noted, after showing a video clip of President Trump commenting on the issue.

Maya Wiley, Vice President for Social Justice at The New School, added that there are many good police officers who know how to handle such situations, “and feel that this is wrong policing, and we should be thankful for them. But they’re often silenced within the department, and made to feel afraid of speaking out about it. Police officers too often escalate a situation that leads to such excessive force, instead of talking it through calmly.”

And this blogger has posted a number of times previously here and on Facebook, decrying the problem of police brutality, particularly on unarmed black man, which evidently happened here yet again.

Given that this is a culture blog I would remind readers of Blood is at the Doorstep, one of the finest and most moving films I’ve seen in the last few years, which brilliantly and beautifully documents the tragic case of Dontre Hamilton’s death, by a hail of police bullets in downtown Milwaukee’s Red Arrow Park. 1

1 At another level of police-race relations, it’s heartening that Starbucks Corporation closed down its hundreds of stores recently for a day of racial-bias sensitivity training after Starbucks employees called the police simply because to black men were in Starbucks coffee shop waiting for a friend. The two men were arrested, prompting outcry nationally and a realization of a problem amongst Starbucks leaders.