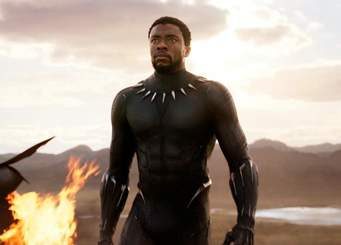 Even without his mask, T’Challa (Chadwick Boseman as The Black Panther) retains his superpowers by wearing a magical necklace. Courtesy www.frontera.info.com

The Marcus Theater ticket taker – a pudgy, full-grown white man with an adolescent’s gawky enthusiasm – seemed to have hot-wired Black Panther into his skull, and could hardly stay seated on his stool. He blurted out a single run-on-sentence- thumbs-way-up review of it, and told us to stay after the closing credits for a postlude. I almost expected him to follow us in, plop down, gobble our popcorn, and blab a scene-by-scene spoiling of the movie and, while it played, show us how to order Black Panther paraphernalia online with his smart phone.

Thankfully he didn’t, so I was merely bemused, which primed me, and probably helped my receptivity. You see, I came to Black Panther as in inverted sort of viewer, one who only periodically partakes of action super-hero movies, and resistant to the sense-gorging proliferation of digital special-effects, most of which for me, despite their frequent razzle-dazzle, go down like artificially manufactured food, with injected nutrition, if it’s there at all.

Give me the vintage and hard-to-imagine magic and romance of the original 1933 King Kong, and the mighty ebb-and-flow of the 1956 Moby-Dick, for big special effects, or the chilling subtleties of the original Dracula with Bela Lugosi, for supernature. Such films exercise the imagination, instead of overwhelming it with effects, and still seem somehow more akin to nature, and supernature, as I sense and imagine monsters, vampires and dinosaurs might be if around today (look again, wary reader). If that makes me hopelessly old and unhip in some eyes, so be it. At least I have a distinct point of view that doesn’t simply reel with every gigantic screen explosion of easy, digital intoxication.

As for Black Panther, it’s a lot more than a gargantuan carton of force-fed digital popcorn exploding in your mouth and ears, tasting and sounding like hard-edged cardboard. There’s plenty of nutrition, intellectually and spiritually, which deftly sustains its two-and-a-half hours as much as the action counterpoints the often-reflective and introspective dialogue.

The only superhero movies I’ve bothered to attend in theaters in recent times have been a couple of Christopher Nolan’s abundantly dark Batman movies buoyed by, in The Dark Knight, the peculiar humor of the quintessential British character actor Michael Caine as Bruce Wayne’s busy-body butler Alfred Pennyworth, and Heath Ledger’s almost career-defining Joker, a strangely affecting, almost sympathetic original of a monstrosity, maybe the best arch-villain in movie history. However Tom Hardy’s intellectual, arrogant, sneering brute Bane, in The Dark Knight Rises, competes with The Joker.

Black Panther trafficks in plenty of shadows but is ultimately a self-questioning, affirmative, empowering saga and it earns that exalted position, just like the mythical African nation of Wakanda’s king T’Challa (Chadwick Boseman) earns his throne by facing several mano-a-mano challenges in primal duels with swords and shields. One could’ve easily imagined an African-American Batman, for the first truly epic black movie superhero, given the black motif of his style, which gives the darkest color a brooding nobility. But Nolan seems to have cornered that franchise with plenty of substance in its bulwark. 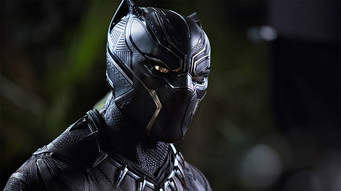 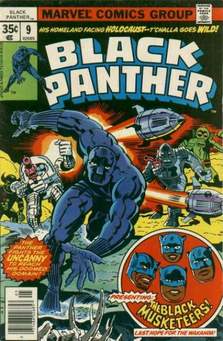 So writer director Ryan Coogler wisely fashioned a superhero with a grand composite of a vintage comic book hero *above) and the real-life African-American militant activist group, the Black Panthers, which itself draws from African mythology, excavated well here. Coogler, still only 31 years old, was born in Oakland, as were the real Black Panthers, and he surely has their complicated legacy deeply ingrained in him. But his fascination with this hero mythology grew from his boyhood immersion in the ground-breaking Black Panther, the black comic book superhero from Marvel Comics.

He also likely drew inspiration from noted author, social critic and essayist Ta-Nehisi Coates, who wrote an update of the superhero in comic book form. 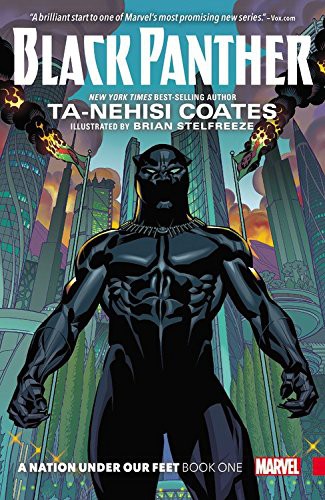 Coogler crucially addresses the historical Panthers’ militant gun-toting side and their sometimes-impulsive violence, but this movie finally affirms redemptive, constructive, liberating Black Panther values, even reflecting the real-life group’s extensive, underpublicized, community-oriented work, which happened in Oakland and Chicago, among other cities. (For more on this subject, see my blog on the documentary photo book on the civil rights era in the north):

And Coogler quickly began winning me over by opening the movie in a basketball playground setting in 1970s Oakland. In fact, those city scenes are the film’s most convincing and moving for me, as they fully sketch out the modern roots of this hero, his challenges and sensibilities.

Yet, the sensibilities, style and the ethos reach back  to motherland Africa. One of the film’s gratifying aspects is how we viewers, regardless of our own ethnicity, come to sense that this Africa is the mother lode of humanity, a historical fact, but also, Black Panther asserts, as a wellspring of humanity’s greatest achievements, especially in technology, medicine and architecture. That metaphor is richly evoked by Wakanda’s capital city standing beside a great body of water and atop a series of magnificent waterfalls. It’s on the edge of those deep cascades, standing in the water that rushes to the precipitous edge, that the would-be king must ritualistically face his duels with challengers to his throne.

Further, waters of the frozen kind will later engulf a pivotal plot turn, as the tale tinkers with doom, fate and hope. The backdrop, amid sunblessed African savannahs and rolling valleys, is the eloquently funky, retro-futuristic architecture of the land’s capital city, reminiscent of Blade Runner, but here expressive of a distinct Afro-aesthetic rather than dystopian decay.

So it’s not surprising that ultimately Coogler leads us back to tattered ol’ Oakland and the most pivotal scene of the movie’s plot – actually in the prologue – as well as the playground setting, where even a white-haired black dude on the cracked-concrete basketball court still can execute a spin move to a svelte drive to the basket. And when the high-tech-yet-brown-skinned Wakanda super-aircraft portals in and lands on the Oakland court, it’s like a gift from the gods to the playground youth. You sense that a young black street kid, with little resources but his/her own intellectual curiosity, talents and guts, can simply touch the ship like a giant talisman, and gain power to the journey to become a perhaps a techno-geek warrior, like a number of the Wakandans – most noticeably the women, in a nifty smashing of Silicon Valley-esque stereotypes.* 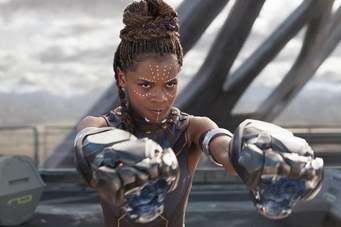 T’Challa’s sister Okoye (Danai Gurira) demonstrates that a magical natural resource found in Wakanda can be used for fighting as well as healing, in this battle scene from “Black Panther.”

The co-writer-director further bolsters his P.C. cred (the initials shouldn’t be just a pejorative co-opted by the reactionary Trump era), in his handling of huge rhinoceroses. The species, in the real world, is now grotesquely hunted for its horn, leaving massive dead carcasses behind to rot. The Wakandans raise them as pets and to ride as metal-armoured transport for battle. Coogler wittily reveals a tender side of the hulking creatures. One rhino ends up charging a fetching young woman but pulls up just short – to deliver her an affectionate, slightly sloppy lick on the cheek – right in the middle of a battle. 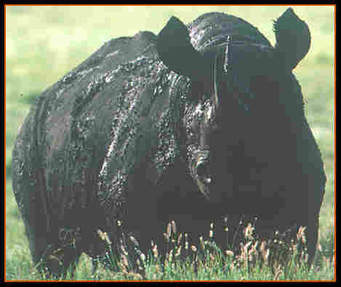 A large species of black rhinoceros, with his natural armor, is used as a pet and a saddled beast of burden in battle in “Black Panther.” Courtesy aeffonline.org

Also politically speaking, for me, Boseman’s young, newly-crowned Panther king evokes the 21-year-old Fred Hampton, who was murdered by a coalition of the FBI and Chicago police in 1969. Hampton radiated promise as the greatest real-life Panther leader, with charisma, eloquence, looks, intelligence and ability to transcend violence to assert black power In the sort of community oriented activism that T’Challa seems ready to lead his too-comfortably-remote nation towards.

The last point addresses Coogler’s message to any group of people insufficiently engaged in the struggles and suffering of fellow humankind. These extraordinary Africans have built a sort of utopia but the new king realizes, partly from the tragic mistakes his father made, that much more must be done by those so empowered. This moral conundrum deeply shadows the king’s consciousness.

So Coogler ain’t lettin’ anybody off the hook here, which is wise and admirable, especially in times in need of smart, inspirational power from somewhere, emergent leaders, among the people. Nor are the film’s most-conflicting characters simply black and white (and there is one significant Caucasian character in the movie, a CIA agent, who’s pulled into all the African intrigue and drama.) The king’s greatest challenger, the aforementioned EriK Killmonger (Michael B. Jordan), seems to harbor a deep, somewhat inchoate hatred. And yet the dreadlocked, street-jive talker has an intriguingly engaging personality under the macho chest puffing. Even T’Challa comes to understand that a complex soul lies within this man, who wants everything that he has. 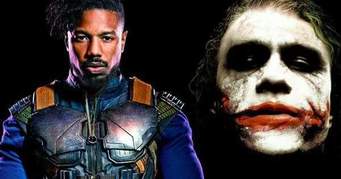 Michael B. Jordan (left) as Erik Killmonger in “Black Panther,” is among the most fascinating superhero movie villains since Heath Ledger (left) as The Joker in “The Dark Knight.” Courtesy www3.pictures.zimbio.com

Ultimately Black Panther is a brilliantly conceived, executed and meaty high-tech show, with plenty of low-tech and humane values. The deftly-edited battle scenes flash by quickly and, even in the one-on-one macho challenges, there’s almost no bloodshed or gore to endure. I’m overjoyed that it’s a huge success despite that restraint. Perhaps we’ve (mostly) all had enough of real-life blood and gore that we don’t need much in our easily-abused “realistic” movie fare. Rather, the greatest power of the Wakandans’ genius for technology is mining a seemingly magical natural resource, for healing. The best natural healing often does seem magical.

Nor is the movie trampled by huge raging monsters, dinosaurs or sabertooth tigers. Wakandans strive, for the most part, to cultivate harmony with nature, as well as humanity.

For all that, and it’s often-dazzling and moving entertainment, Black Panther has got serious super-hero game, and scores from not only across the court, but on a super-rainbow arc from Wakanda to a bent Oakland playground’s hoop. SWISH!!!!

So, even the pudgy, white ticket-taker, all elbows and gut, scored in a bounce-around-the-rim layup.

* Black Panther‘s very strong female roles include Angela Bassett as T’Challa’s mother Ramonda, Danai Gurira as his sister Okoye, and Lupita Nyong’o as his love interest Nakia. Reportedly, women have comprised a surprising 45% of the audience for the movie. The stellar cast also includes Daniel Kaluuya (Oscar-nominated star of the acclaimed movie Get Out) and Forest Whitaker.