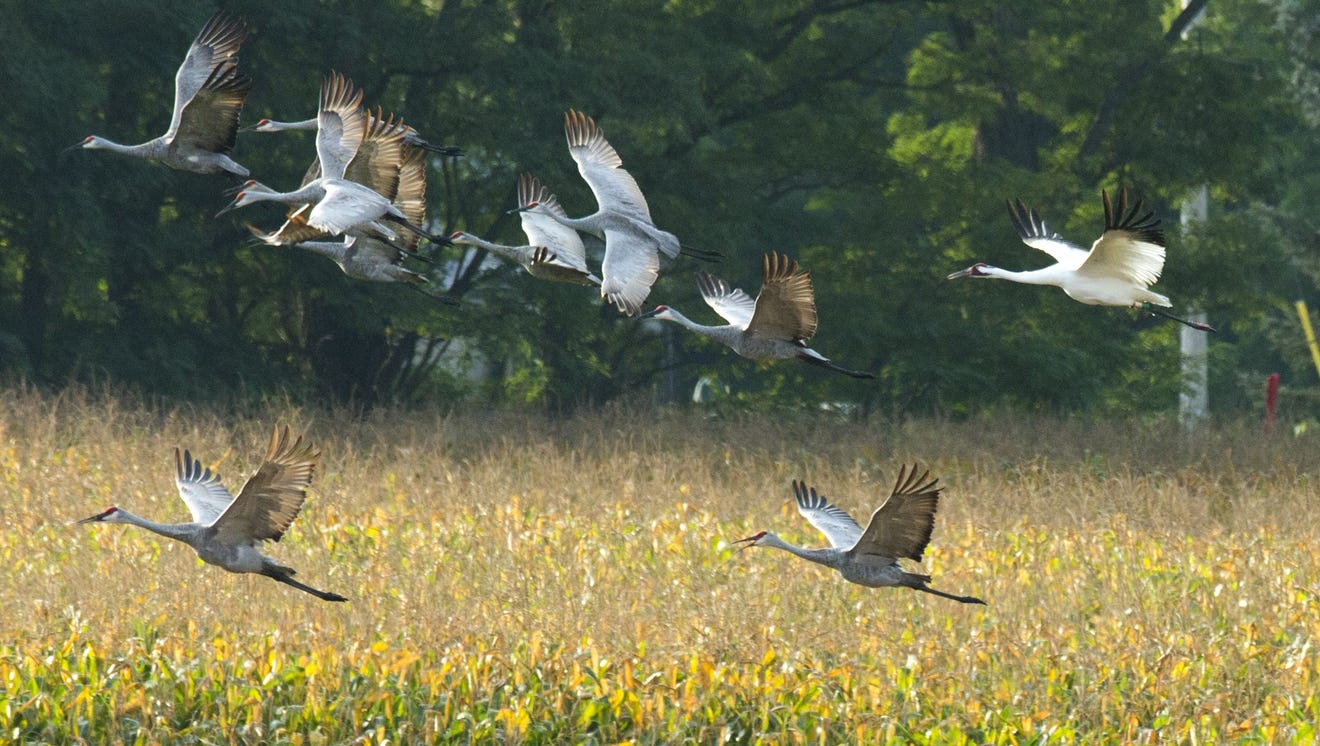 Paul A. Smith’s excellent Milwaukee Journal-Sentinel story is on springtime when young (and aging) men’s fancy can turn to…cranes!

Yes, the natural romance is the mystique and magnificence of Wisconsin’s cranes – the sandhill and, now the reviving whooping crane. It’s well worth a read, here:

I was immediately struck by the photographer Mark Hoffman’s lead image (above) of ten sandhill cranes and one white whooping crane taking flight – and Smith’s story, because they swept me back to one of the most dramatically intimate experiences of my life.

They were hard times for me. I was recovering from a rather stunning divorce, initiated by my ex-spouse right when I felt I, and we, were finally emerging into the manageable light from the long, rather surreal darkness of my bilateral neuropathy, which began fatefully on New Year’s Day, 2004 as I was injured exercising on a rickety old NordicTrack ski workout machine, while watching a Twilight Zone marathon, a portent of the weird new life of pain and disability I was entering.

Now I was alone, slouching toward bachelorhood again, in an apartment in Fitchburg, just south of Madison’s city limits. I had also recently been downsized from the staff of The Capital Times, along with about 25 other baby boomer staffers, after nearly 20 years at the newspaper as arts reporter.

These combination punches had staggered me, then felled me to the mat. But I must’ve pulled myself up sometime before the count of 10. I believe, by then, I had begun teaching a new cultural journalism class I had created for Edgewood College, and was applying for doctoral programs in English at several universities.

And the group of downsized Cap Times staffers had begun meeting monthly for breakfasts at the nearby Copper Top restaurant, on Whitney Way just off The Beltline. It was sort of a lifer-journalists support group, though our pride allowed us to sort of imagine it more like a gossipy happy hour after a long day of putting the paper out – except it was 9:30 in the morning, with OJ and eggs instead of booze and chip dip. We still compared notes on work-a-day battle scars, on long-gone staffers who sometimes resurfaced here, and on real or imagined wrangling with the new editor, who’d summarily vanquished us.

So, it was tough times, emotionally, psychologically. One recent ritual I’d found to escape my solitary doldrums would be to “get out,” into nearby nature. Just south of my apartment complex on Crescent Road was a foot path that led to another path, which ran along the west side of Dunn’s Marsh, an unofficial southerly extension of the sprawling wilds of the UW Arboretum.

As my home while married, along Nakoma Road, wasn’t far away either, I’d seen Canada geese arrive in the marsh’s pond and fly over in their airplane-like V patterns a number of times. One experience of them I got in a photo (below), and their rising musicality proved inspiring in it’s way. I used it for the cover of a concert program I was commissioned to design and annotate, for the Madison Music Collective. 1 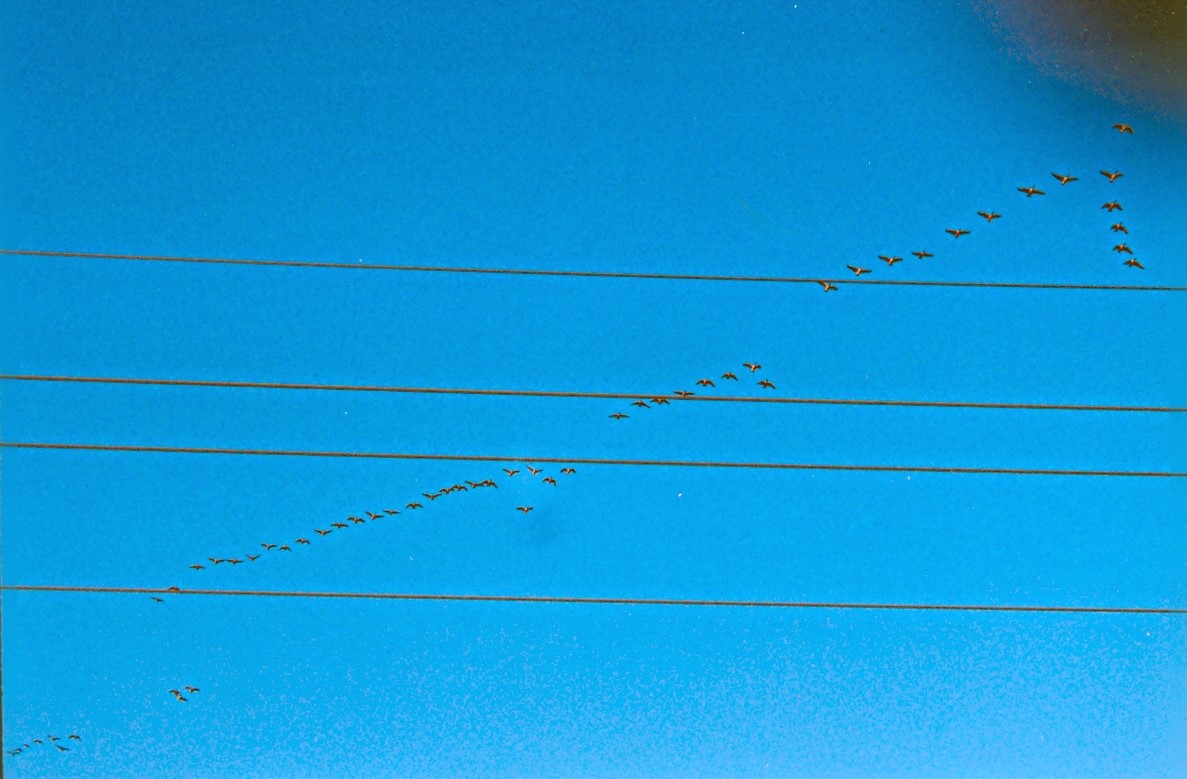 But that didn’t quite prepare me. This day, I was trundling down the long path, noticing little inlets of tiny fish and insect life along the path’s watery ways. So my head was down, in the rhythm of slightly shuffling footsteps, a bit like Robert Crumb’s banana-nosed Flakey Foont, the perpetually clueless disciple of quasi-mystic Mr. Natural. 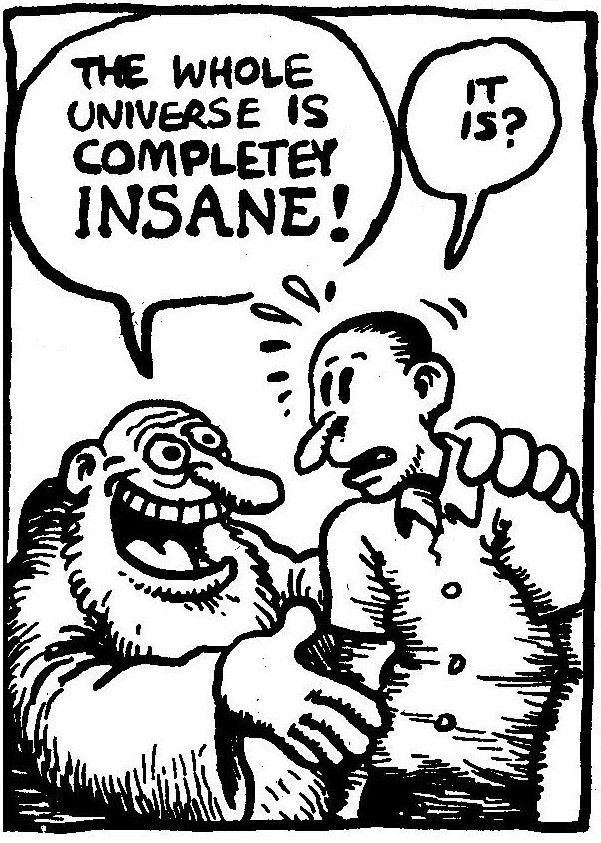 The whole universe did feel vaguely, but completely, insane.

Then, without warning, strange new rhythms arose around me. First came the sound: like spectral voices from another planet, as I’d never heard them so closely. It was a weird confluence of calling voices, at once guttural and rising to an exultant pitch, but altogether a harmony fragmenting into wondrous echoes of chaos in its most unearthly, yet very earthy, beauty. Was the universe completely insane, or sublime?

It grew louder in each passing second, and by now I had peered up over the tall foliage and grass surrounding the pond and there I saw them: Sandhill cranes, much larger than Canada geese, with their long elegant necks and vast wings, armed with the lance-tips of large feather points. Their cries grew louder because they were descending into the pond a short stone’s throw away from me and, amid my amazement, I counted them: nine crane beings, swooping closer and lower.

A clearing in the overgrowth allowed me to see them, as the majestic birds landed in the water, dropping their legs, which grazed the top of the water creating a fine surf under each bird, and then the powerful wings helping to slow their final descent and watery entrance. I could almost see the muscles beneath the feathers, and a primal awe arose from my breast.

They were transforming before my eyes from aerial to aquatic creatures, waves billowing around them and the faintly alien cry now dissolving into the sound of the rippling wings and waves. And now, one more rhythm, that of the birds’ bodies floating together upon the pond’s surface, finding a collective oneness in their swimming strokes. I was so close that it seemed that at least one of the great birds had cocked its head to size me up in a fleeting moment.

I wonder: Do, in such interludes, differing species intersect and negotiate their shared oneness on this vast, groaning globe of earth, wind, fire and water? Such oneness ripples across the waves of time, whether or not we notice or honor it, harboring wisdom to be gained perhaps, the wisdom of the wild, in the call of the wild. Searching through this realm, with the assist of our most synchronistic science (and politics) may be the key to how we might live, survive and flourish – all of us millions of species – in a world now ravaged, even dying, from ecological abuse.

Unlike several views of Canada geese over this marsh, I didn’t have a camera with me, so this written memory of the cranes is all I have, and I cherish it. Flakey Foont was lifted up with virtual wings, his skinny body wobbling with nothing but air under his scrambling feet, but transformed a bit, in a memory of rippling oneness.

1 Concert program cover for a barn jazz concert by the Madison Music Collective, using a Canada geese photo over Dunn’s Marsh. Photo and design by Kevin Lynch with technical assistance by graphic artist Roger Daleiden (The flying saxophonist is a lot hipper than flying Flakey Foont): 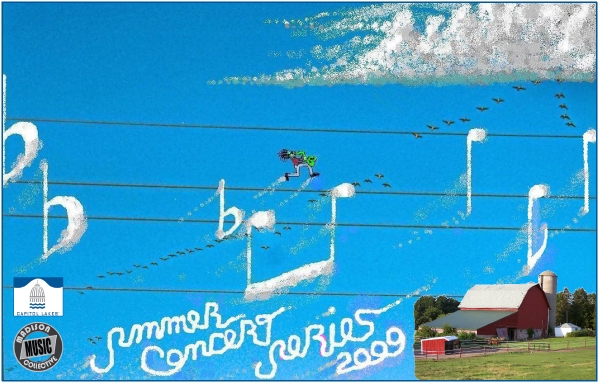