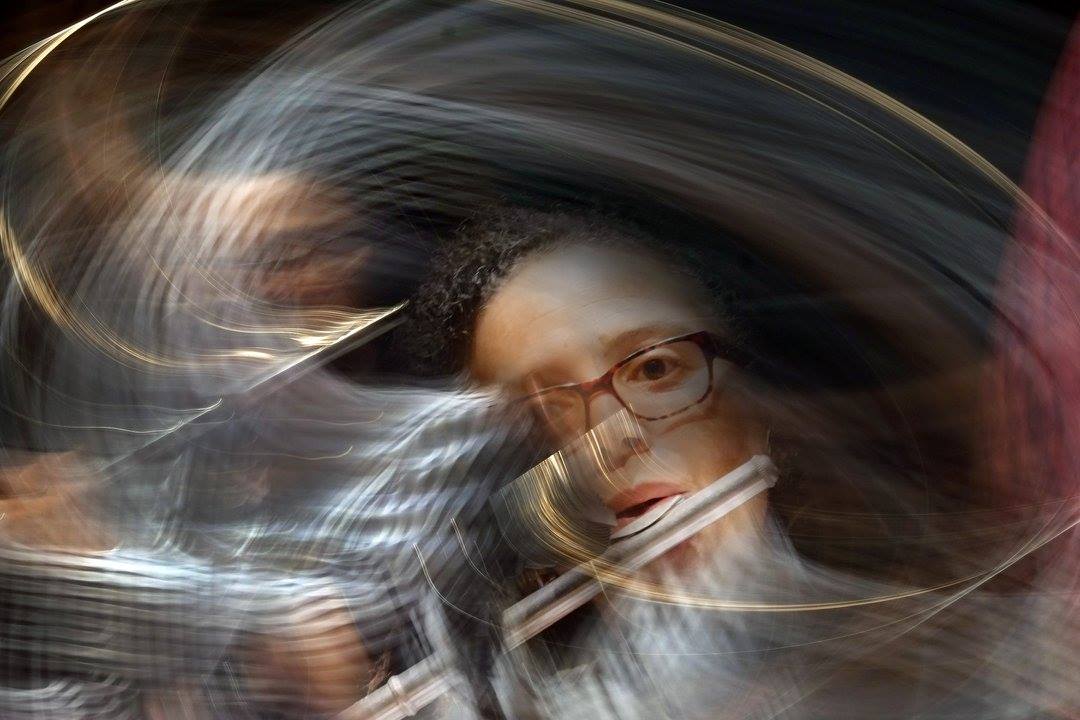 She’s extraordinary because, despite its radiant qualities, the flute has occupied a comparatively humble place in both jazz, classical and pop music, all too often being a refuge, and a musical ghetto, for women musicians.

Starting in the late 1970s, James Newton expanded on the more classical flute technique Hubert Laws had applied to jazz and became among the first to make ambitious, stately and highly-textural original statements focussed on the instrument, and to extend the jazz tradition.

In recent times, however, no one has taken the slender, silver sound-mover further than California-born Chicagoan Nicole Mitchell. She reminds us the flute conveys among the most celestial of sounds but also, in its closeness to pure breath, among the most human and organic. The elastic space across that spectrum actually holds powers of great, moving evocation and beauty, a region she has consistently explored and expanded. 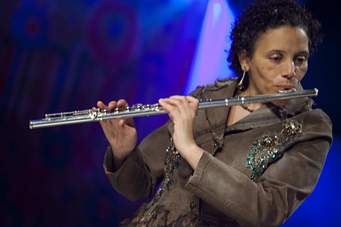 Mitchell also has served as the first woman president of Chicago’s internationally-influential  Association for the Advancement of Creative Musicians. Among AACM musicians who also advanced the role of flute are Henry Threadgill and Anthony Braxton. But the expansiveness of Mitchell’s vision seems more akin to pre-AACM space-jazz bandleader Sun Ra and perhaps Pulitzer-winning AACM brass player-composer Wadada Leo Smith.

None of these predecessors diminish the originality of Mitchell’s artistic quest. She is currently a Professor of Music, teaching in “Integrated Composition, Improvisation and Technology,” (ICIT) a new cutting-edge graduate program at the University of California, Irvine. Mitchell has received the DownBeat Critics Poll and the Jazz Journalists Association awards as “Top Flutist of the Year” for four consecutive years (2010-2014) and again in 2017, from the JJA. The Museum of Contemporary Art in Chicago commissioned Mandorla. 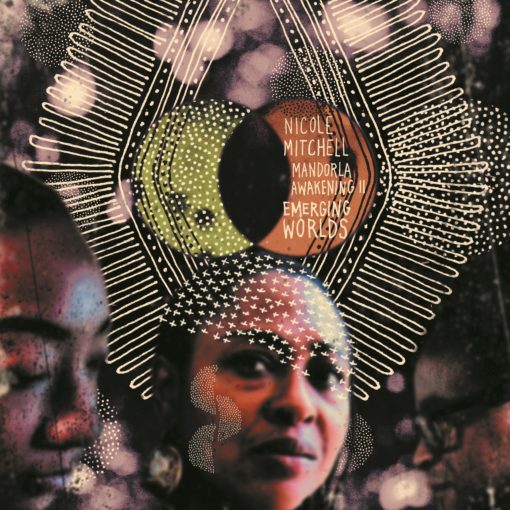 In her liner notes, Mitchell describes Mandorla as a society formed on “an obscure island in the Atlantic” in 2099. Amid the “inevitable decay” of contemporary society, “a vibrant, diverse, and technologically adept culture emerges…an egalitarian society designed by people who had survived the destructive forces of the egos war and the global virus .”

The more specific musical story poetically describes Mandorla as possible by the striving for “the sound of truth” generated by “sticking our hands in the black soil” and allowing birds to “sing interlocking songs of imagination.” The sound seems “the one thread we hold to pull (to safety) our loved ones dangling over the cliff, close to peril and poverty.”

So one can readily imagine interlocking birdsong evoked by her flute, but the album’s larger ensemble canvas also entails, in the piece “Timewrap,”  (Or “timewarp?” her titles tend to wordplay),  a moan, engendered from the history of slavery, from blood in the fields, from perhaps Toni Morrison’s ghostly, tragic Beloved. “That moan was a seed of liberation.” Mitchell writes. “That moan love for life. That moan is determination. That moan has been a grain of sand that calls our destiny and survival of humanity.”

So Mandorla opens with “Egoes War,” a pulse, big sonic texture, a thick wash of electronic and acoustic effects. A forlorn theme emerges on flute, sounding both ancient and futuristic. The guitar is a space traveler or an ego tripper. (Alex Wing, who plays guitar, oud, and theremin on the album, will be part of Mitchell’s quartet here, along with guitarist

Felton Offard and the album’s percussionist Jovia Armstrong). This piece does sound warlike, but strangely beautiful. Mitchell’s tone and wary flute theme spiral into the toxic haze like a shaman-goddess working to ease the bloodletting, perhaps allowing a purging of toxins. A descending line repeats like a gentle, insistent jeremiad. Percussion work sizzles and crackles like wildfire of fear and perhaps hope.

The second piece “Sub-Mission” starts tentatively, with shakuhachi flute, oud, and other AACM-ish “little instruments.” The foundlings of the vibrant, multi-cultural “technologically adept” culture are emerging on the remote Atlantic island. Mitchell’s flute sounds like an explorer on this island, a violin also wends its way through the uncertainty, the flute emboldens with full-throated courage. Then, a pirouetting, lyrical dance arises among the instruments, followed by a somewhat ominous interlude set against Tomeka Reid’s cello, which spawns its own strange beauty. This all suggests facing the challenge of letting go of old ways and submitting to the possibility of a new, enlightened society.

Plenty more ensues in Mandorla Awakening, including several vocals to advance the drama and storyline. But I’ll leave the discovery of that to you, and to those parts of Mandorla that may ensue at Sunday’s concert.

In this age of Trump and regressive, authoritarian politics, her sort of creative consciousness feels urgent, replenishing, empowering.

Make no mistake; Nicole Mitchell is out there, forging ahead, her talismanic flute catching the light of a new dawn.