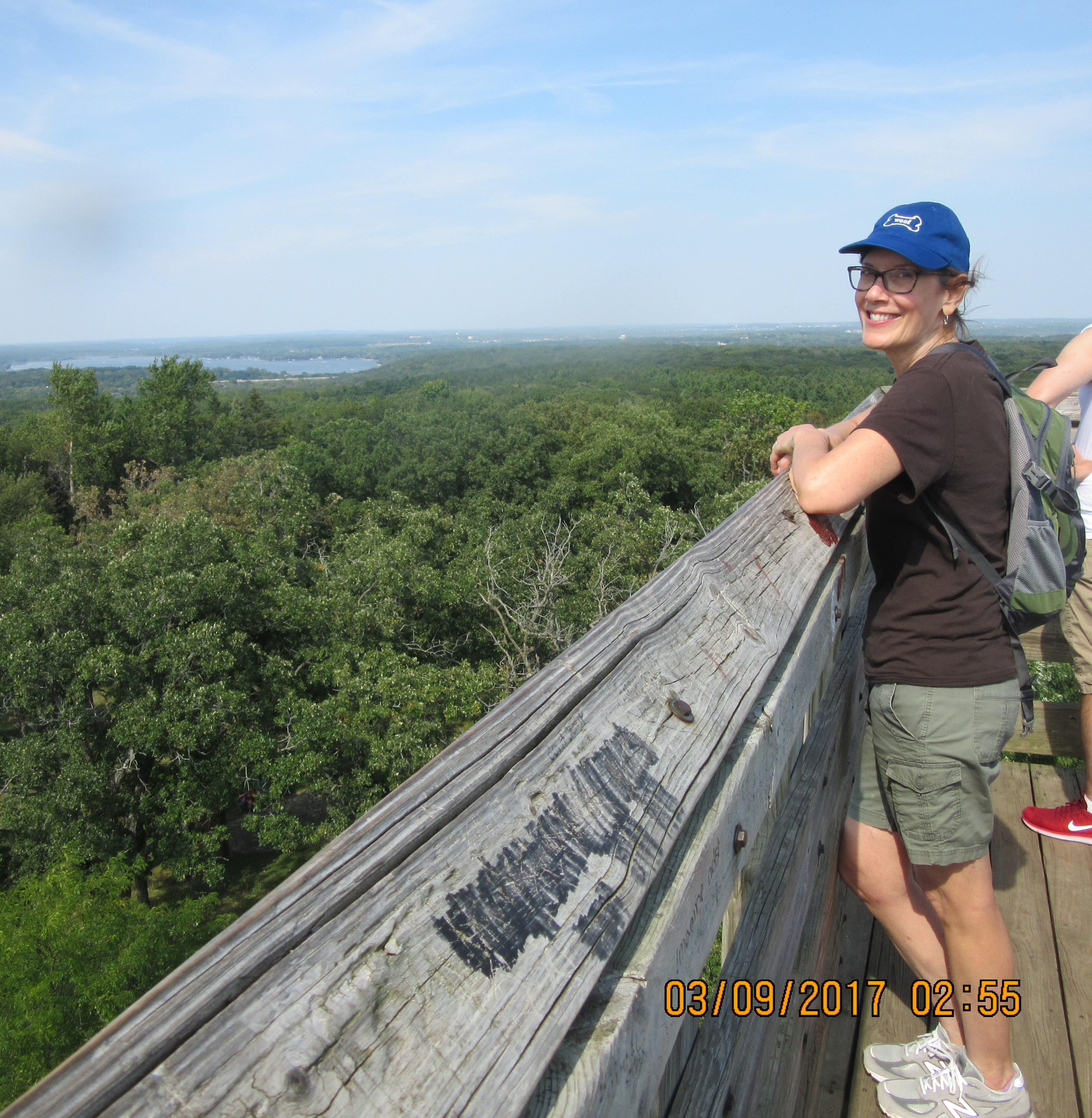 Lapham Peak Unit of the Kettle Moraine State Forest is sort of legendary among state parks and locations in Wisconsin, a place of stunning beauty, of rich physical interaction with nature as a hiker, biker, skiier or picnicker, and a place of magnificence and romance.

I revisited it for only the second time on Labor Day Sunday and I sensed it as all of those things. The only reason it wasn’t a wholly romantic experience was because too many people had the same good idea on a sunny holiday weekend. So it was busy, but everyone was in a good mood. Being out in nature does that to people. But if you choose the right time…

You’ll find that people have carved their names as individuals or as couples into the soft, aging wood of the Lapham Peak Tower which is the climax experience of this park. I wouldn’t be surprised that, if I searched a little bit, I might find one inscribed “Cupcake and Snugs.”
That would be my old friend Frank  “Snugs” Stemper, back in high school with his very first girlfriend, “Cupcake.” That was back when they didn’t know much better. They were too starry-eyed with puppy love, surely on the night when they climbed the tower together all alone, and declared their “love” as another one of the stars twinkling in the sky.

They could’ve been “Romeo and Juliet,” but no…I think Cupcake made up the silly names of affection, but big hulking Marquette High offensive lineman Frank went right along with it, like a puppy dog with tail a-waggin’. 1

To be clear, I am not at all encouraging or endorsing any defacing of this fine public facility! And I’m not accusing Cupcake and Snugs of such public malfeasance.

Nevertheless, Frank did leave a piece of his heart stuck in this park, like an arrow through a tree, or the sword in the stone in the legend of King Arthur. He told his buddies in the MUHS poster club a grand tale about his transporting romantic experience at Lapham Peak with Cupcake.

And not long after that, as I recall, on one Monday back at school, I thought I detected a bit of frosting on Snugs’s smirking lips.

Frank did “deface” the wall of the Poster Club by inscribing “Cupcake” on top of “Snugs” on the wall – as this fairly accurate painting of the club I did way back then shows – right below the black horizontal line above the sink. 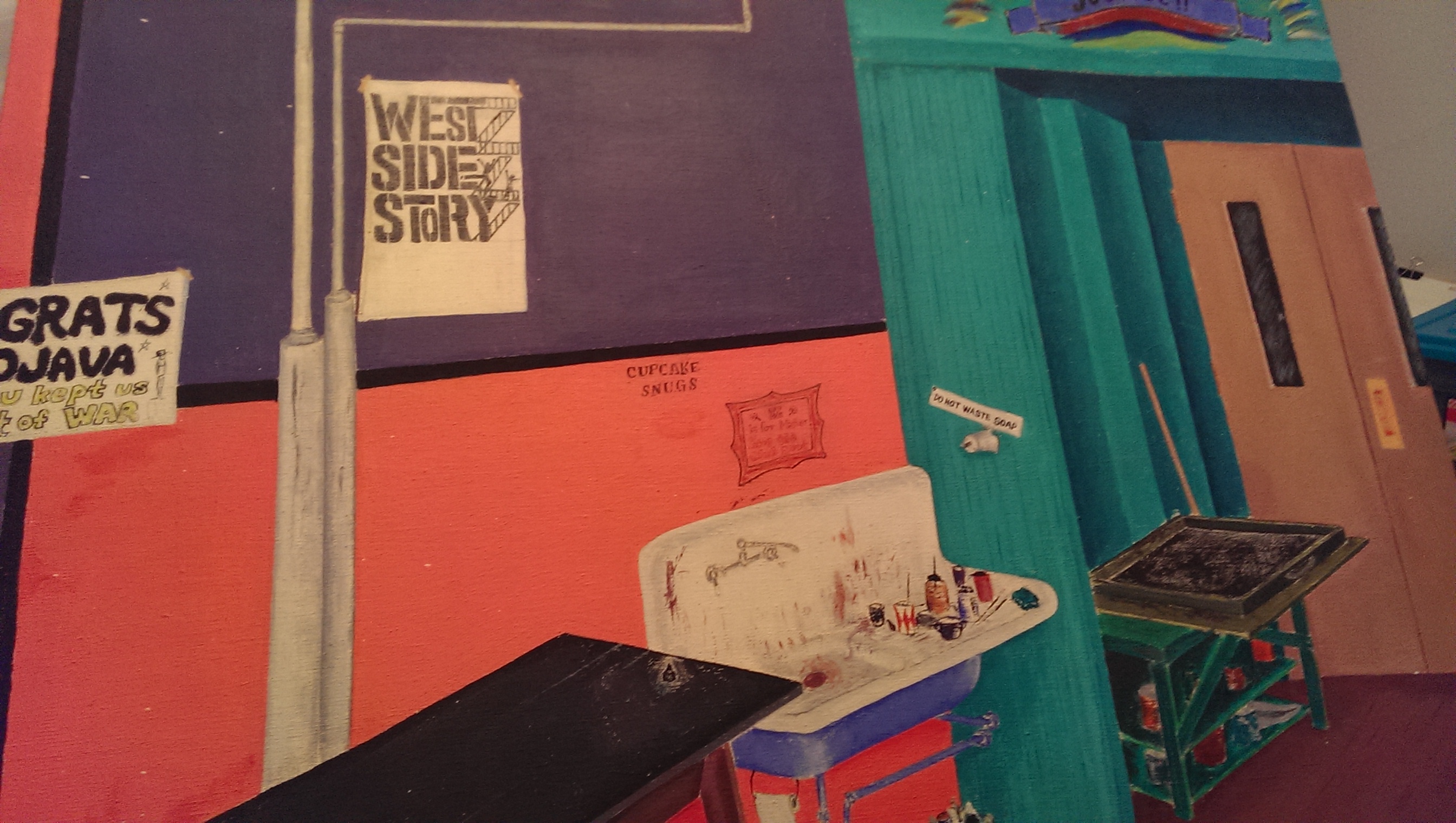 Well, nobody ever quite stepped on Cupcake, but the romance made for very messy icing on the miniature cake, with anniversary candles we’ve kept burning as a running joke all these years.

And Snugs’ romance with Cupcake was finally smushed under the heel of reality. More than anything, the mythical Van Gogh-esque “Starry Night” on Lapham Peak was a fleeting comet. The high school sweethearts broke up before too long, and Frank ended up marrying a great woman named Nancy and they raised five remarkable kids together.

I first visited the peak, in the 1980s, on a gloomy, overcast day, with my first wife, who may have been under the weather, I can’t recall. But she seemed deathly afraid of climbing the tower and looked like a sick puppy as she hung on to the top railing for dear life. Poor neglected Romance stayed down at the bottom, quivering in fear, or at least in angst of disappointment. (My spouse would later go out on the open-air top of one of the World Trade Center twin towers without a discernible problem. So, go figure)

My current girlfriend Ann Peterson, by contrast, delighted in our hike Sunday and the tower climb, as the picture of her at the top illustrates.

Here’s Ann (above) taking a photo on a picturesque turn in the portion of The Ice Age Trail we took to hike up to the tower. The park’s ascending geography includes parking lots at several levels, so the less-than-able can drive up to a lot right under the tower.  But otherwise, I strongly recommend one of several deliciously meandering hikes you can take around the park’s undulating hills before rewarding yourself with a climb up the tower for its stunning views.

Another of the rewards of taking a trek on the Ice Age Trail is encountering trees like one great old oak, full of aging majesty, secrets-laden shadows and sculptural expansiveness. I had to pose for a picture with it (below).

Another couple of trees (below) – which stand like quirky sentinels beside the bottom of the Lapham Peak tower – add great character to the old tower’s proud presence. 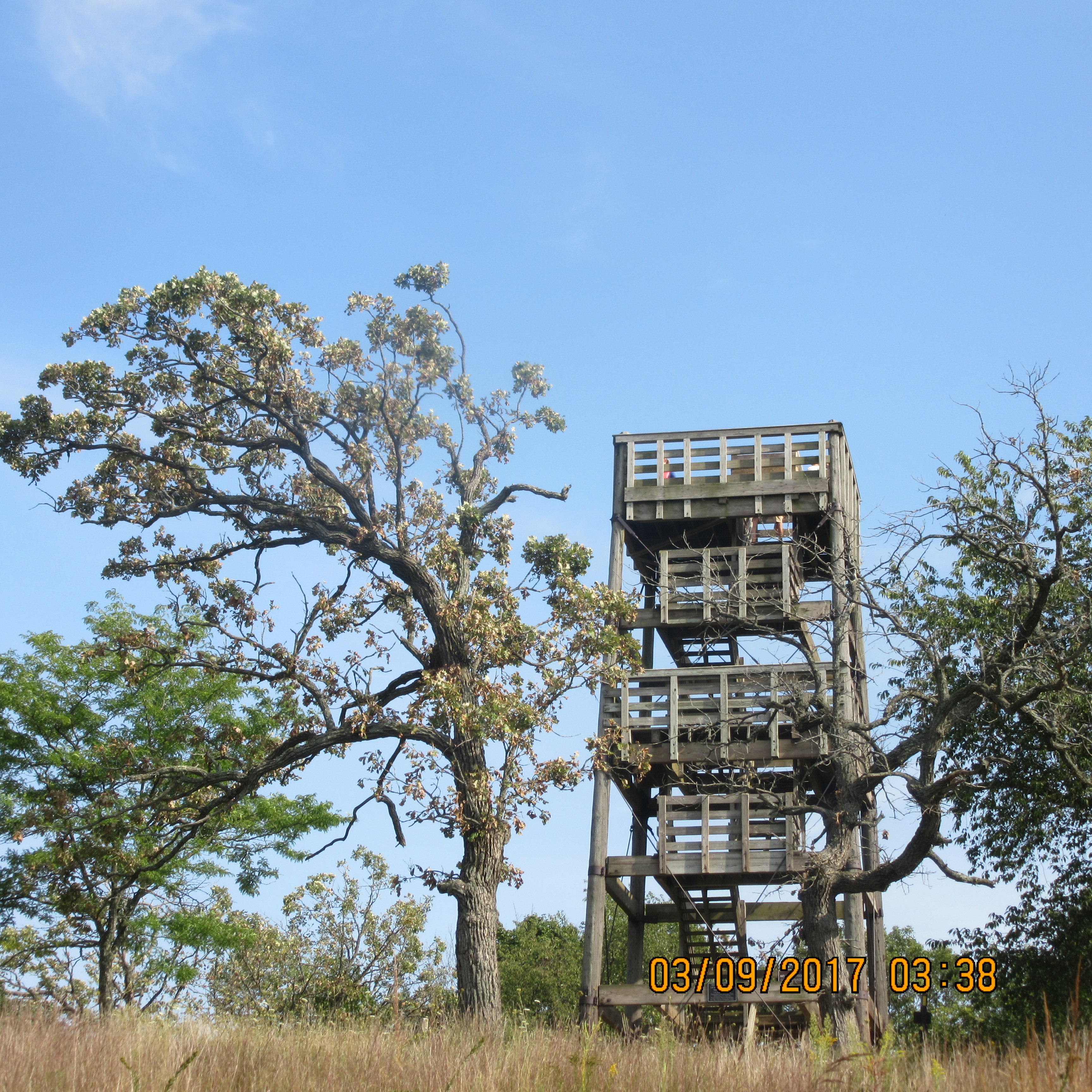 The peak and park are named for Increase A. Lapham, one of the most-celebrated figures in the pantheon of Wisconsin environmentalists along with Aldo Leopold and John Muir, as the state’s preeminent popular historian John Gurda explained in his latest column for The Milwaukee Journal-Sentinel’s Crossroads section last Sunday. Gurda (whose younger brother Paul was also in the Marquette High poster club in my sophomore year) was making the case for including Charles B. Whitnall among those great Wisconsin names, in his excellent column about Whitnall Park.
But I know John Gurda has given Increase Lapham (I love to type that distinctive name) his due in the past. Among the things, Lapham increased awareness and support for the region’s splendid natural resources and beauty. He also increased safety on the Great Lakes. It’s worth recounting this history.

Lapham Peak is the highest point of Waukesha County at 1,233 feet in elevation. In 1851, Charles Hansen acquired the land from the  government and developed it as a tourist attraction. He built a 20-foot-high observation tower and charged a small fee to climb the tower and picnic at its base. During the 1870s, the government use the park tower for surveying purposes.

In time, Increase Lapham – a self-educated engineer, scientist and naturalist – began to make a big difference. Through his work, the Federal Signal Service Division of Telegrams established a signal station at the peak to receive meteorological observations from Pikes Peak in Colorado. Lapham collected this weather data and relayed it to all Great Lakes ports to give advance warning. These warnings helped prevent shipwrecks and gave birth to the National Weather Bureau. 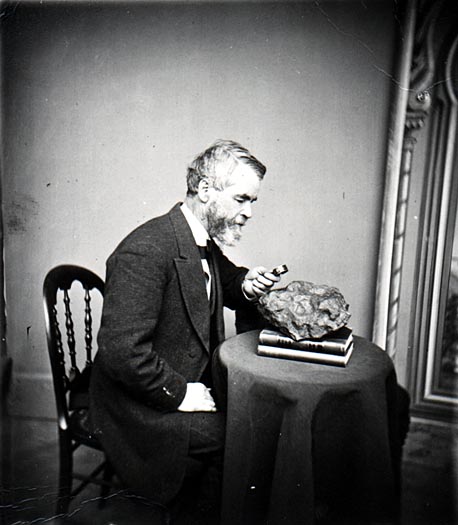 Increase A. Lapham examining a meteor that fell in Wisconsin in 1868. Curiously, “Cupcake” and “Snugs” (see story) had their romance on Lapham Peak in 1968,  exactly 100 years later. Through a wrinkle in time, could this astral rock be the refuse of that “shooting star” romance, or a centennial harbinger? Photo courtesy of Wikipedia public domain

In 1916 Waukesha County Historical Society named the peak in memory of Increase Lapham to honor his efforts in scientific study and his founding of the US Weather Bureau. The state of Wisconsin purchased the hill in 1907, as part of a parcel of land for a tuberculosis sanitarium site. The sanitarium site is now the Ethan Allen School for Boys. In 1939, 50 acres of land surrounding the peak was transferred to the Conservation Department. A 1940 WPA (Works Project Authority) project employed about 60 men who constructed the 45-foot observation tower, installed benches, and developed picnic areas and hiking trails. Today, the Lapham Peak Unit is part of the Kettle Moraine State Forest and its various units are connected by the Ice Age Trail and by the Kettle Moraine Scenic Drive which traverses six counties over 115 miles from Whitewater Lake north to Elkhart Lake. 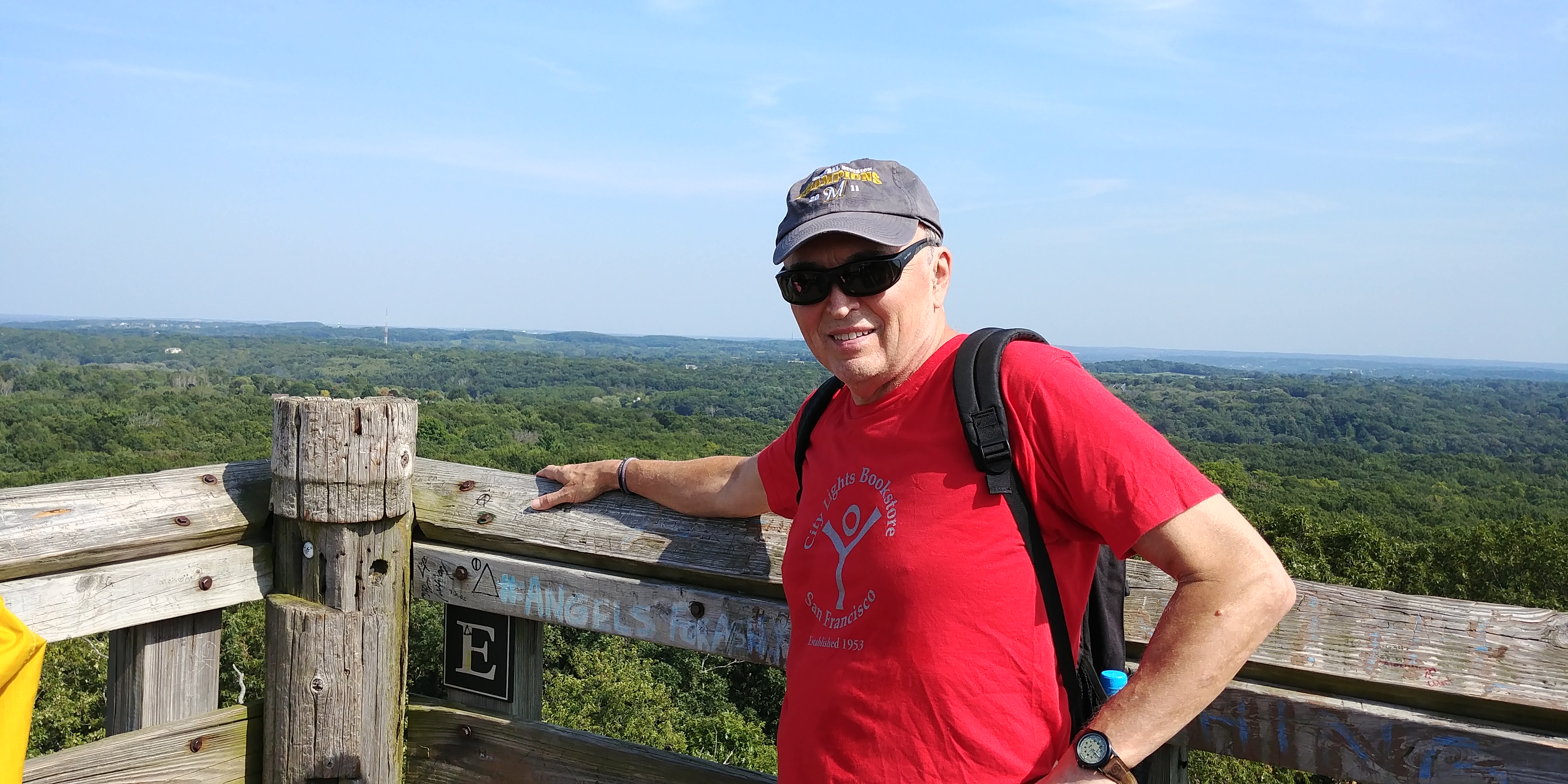 By contrast to my last visit here, it was great getting to the top of the tower on such a lovely day (above). The views were vast and breathtaking.

However there was a haze along the horizon. Someone pointed out to me that you can see Holy Hill (about 25 miles north) if you look closely, even through the haze that day. I took a photograph and if you look closely (in a slightly magnified view below) you can see the famous church on its own lofty skyline perch in another portion of the Kettle Moraine Forest. 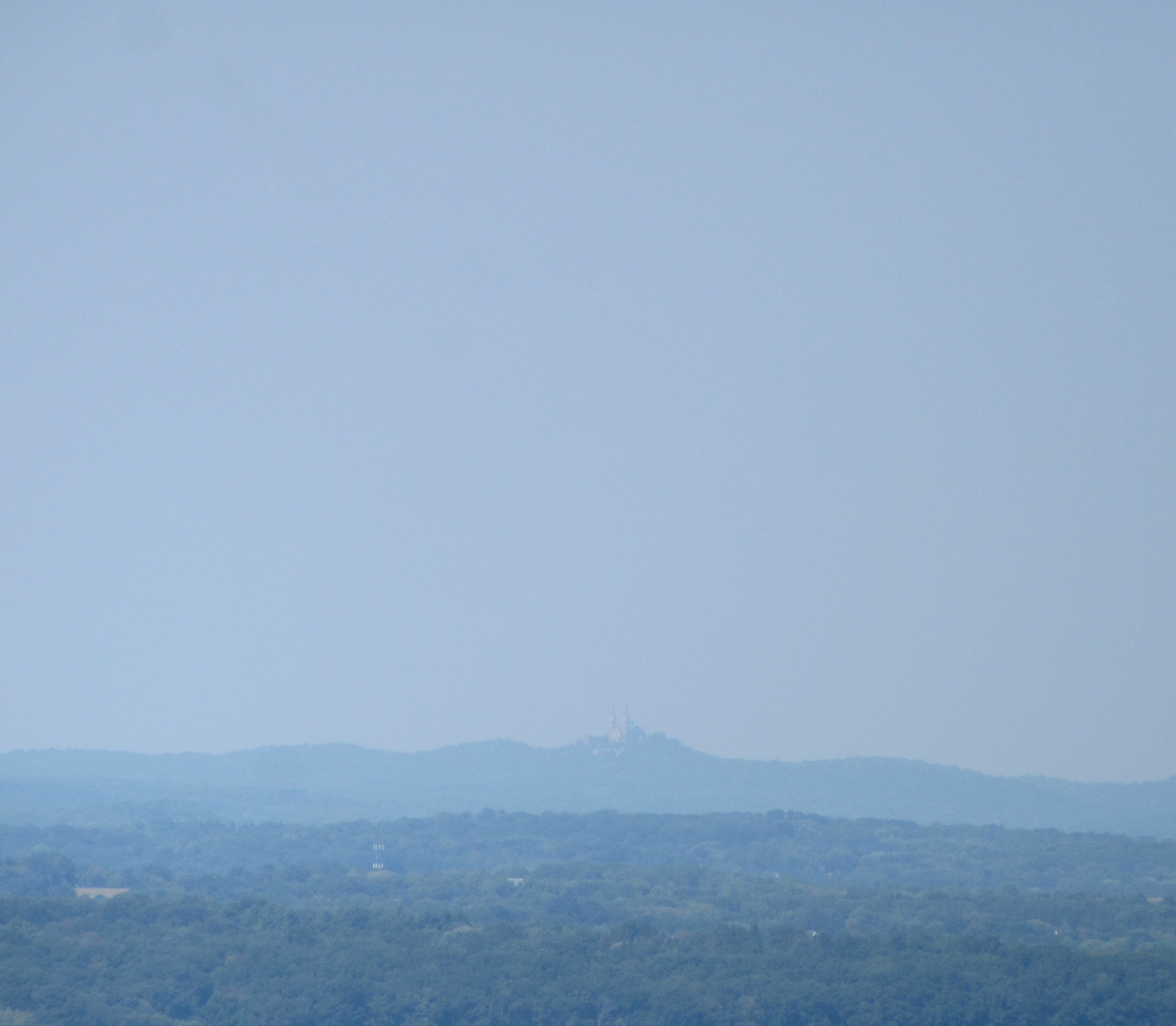 Another remarkable environmental circumstance hovered in this mighty vista. Meteorologists report that the haze on the Wisconsin horizon was due to the wildfires now blazing in California. With all the amazing, even mind-blowing and too-often-tragic extreme weather events these days, it’s nothing too surprising, upon reflection.

I am among the great majority of Americans who have no doubt, along with virtually all scientists, that lot of this environmental chaos has to do with human-made climate change. That’s all the more reason we must do something about improving our public policies and personal attitudes and behaviors. What hangs in the balance is the health of our environment, as well as its beauty, to survive for ensuing generations of romantic couples, and any human who simply appreciates natural life, clean air and water, and the rough, rolling magnificence of the American landscape.

Photos by Kevin Lynch and Ann Peterson, unless otherwise noted