I have lived in a number of neighborhoods in my lifetime in Milwaukee and Madison, most of them quite congenial: A south side family bungalow right north of a Mitchell Field take-off strip where giant jets shook my youthful body and imagination with sonic booms. In Madison’s Nakoma neighborhood, a house influenced by Frank Lloyd Wright’s prairie style, and engulfed in tall pines, and a few blocks away from the city’s splendid Arboretum.

But there is only one neighborhood that I have returned to reside in, for a second time by choice, and that is Milwaukee’s Riverwest. I originally moved here when I bought a duplex with my sister Nancy In the 1980s, which she still lives in. It was a period of great cultural and political vitality, and an ideal location, as much of my journalistic work then was covering music at the original Milwaukee Jazz Gallery, right in the neighborhood, for The Milwaukee Journal.

So, when I moved back to Milwaukee from Madison in 2008, I knew I wanted to return to this unpredictably diverse, slightly funky and always vital region. The following photo essay comprises images compiled on a walk the full-length of Riverwest on the street that I live on, which ended on the North Avenue water reservoir overlooking downtown.
I’m sure any number of other photo portraits could be made by taking different routes around this consistently vibrant neighborhood. But this is mine, from a walk taken the last day of February as the smallest buds began to claim their place and space to grow into. 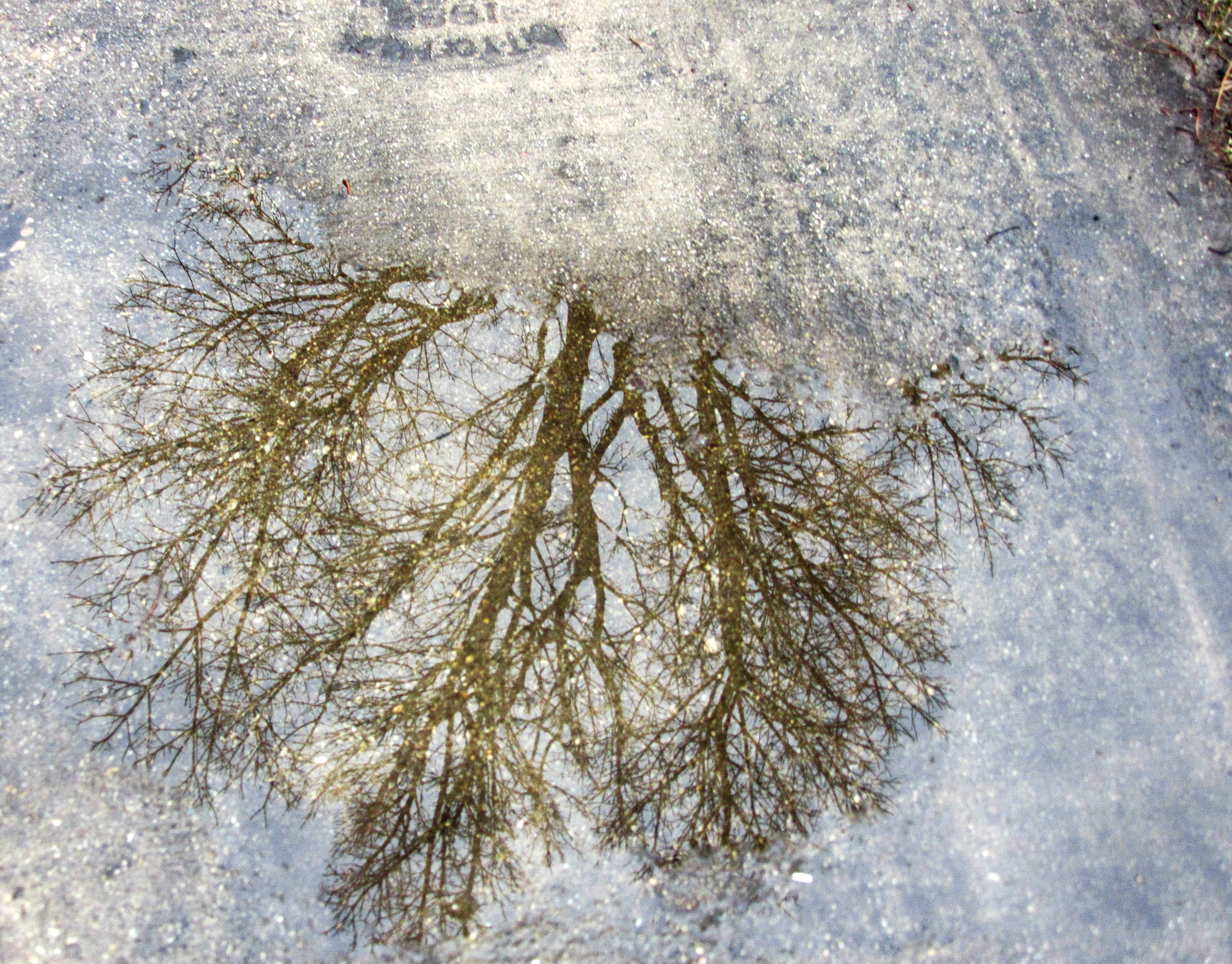 This image characterizes the interface of the urban and natural surroundings – an old, weathered Riverwest sidewalk and a crystal-clear puddle, revealing the tree overhead in which you can just sense the tiny buds emerging from its tips, reaching out to the sky’s fleeting blues. I’d also call this a Katrin Talbot photo, because she consistently gets highly observant shots of small or even grand beauties often standing right under our distracted noses, or toeses (Yes, I’m talking to “smart phone”-addled pedestrians.) Katrin is a gifted Madison photographer, poet, and symphony musician whose Facebook page I recommend you check out. 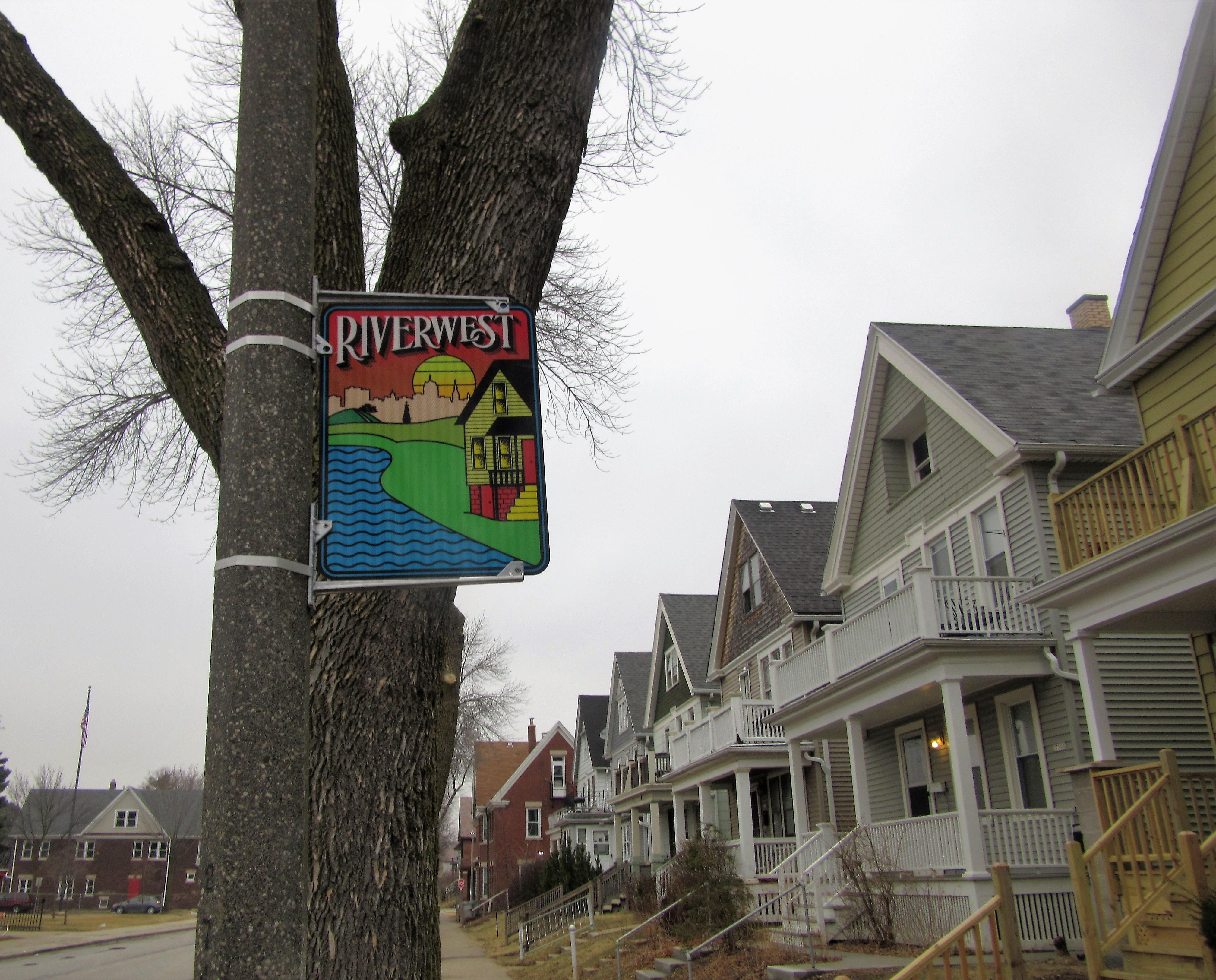 Here’s a block of houses that perfectly reflects the architectural characterization of Riverwest residences as depicted in the neighborhood  signs recently placed all around our neck of the woods. The sign also suggests the way Riverwest overlooks downtown, especially from its high point, the North Avenue water reservoir.
It’s an absolutely big sky view of downtown, perhaps the best that a pedestrian can find. Though I did walk to the top of the reservoir on this day, I did not include that city skyline view, because the subject here is Riverwest. 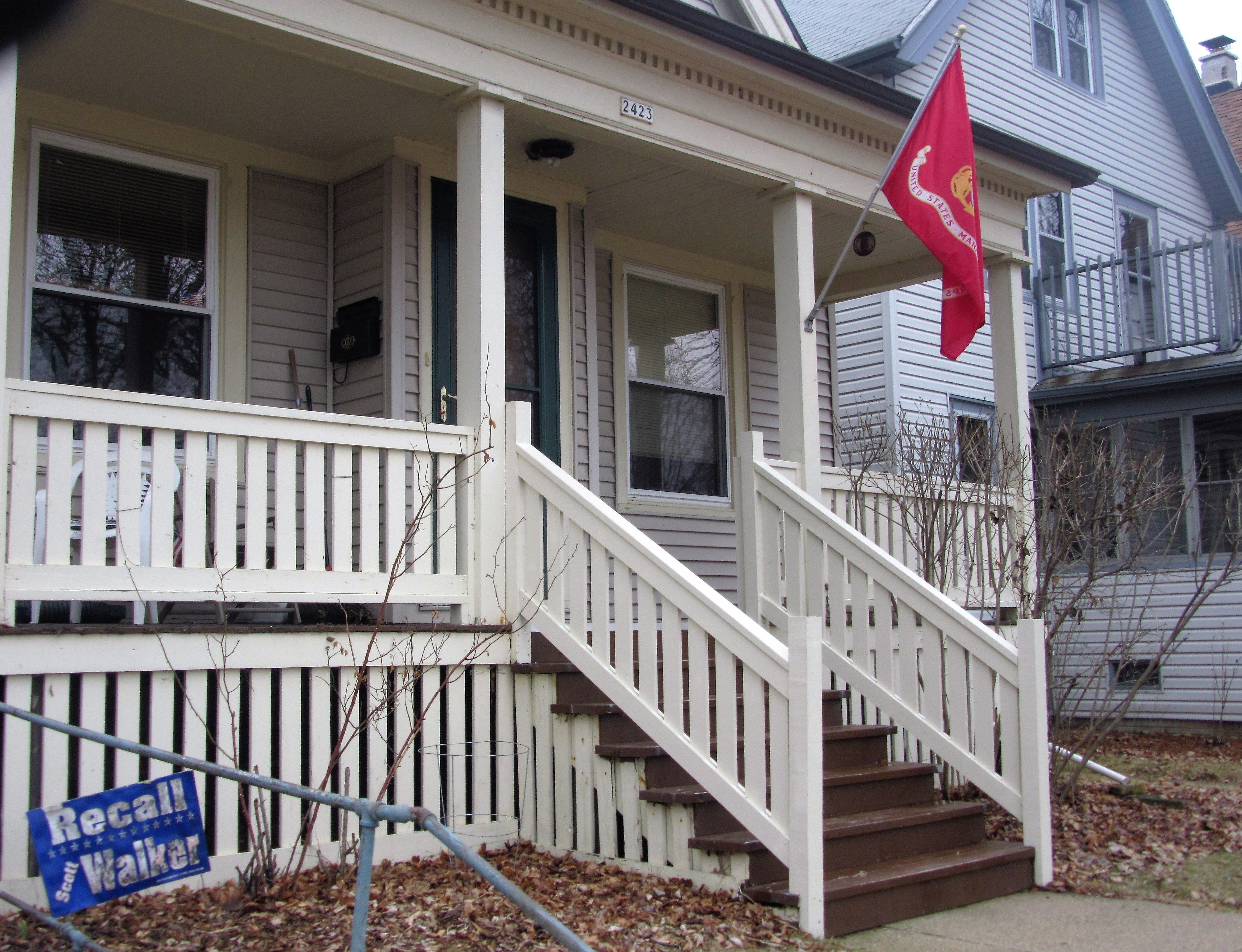 If the iconic image of the new Riverwest signs captures the neighborhood reasonably well, the next two images help dispel some of the stereotypes about who lives here. And I didn’t have to go far to find these – they were actually the first two photographs I took. In this one above, the apparent residence of a United States Marine proudly displays his or her service flag. And yet, this resident resolutely keeps this blue sign out front,  long after the intensely contentious and politically transformative 2011 recall effort to remove Gov. Scott Walker.

The neighbor’s long-standing statement of dissent might not seem typical of a highly disciplined military person, nor such a person’s typical politics. But it reflects a well-trained person who understands the role of a true citizen and patriot. I see it as an excellent example of the independent thinking one finds in this neighborhood, even if a majority of residents probably lean from the center to the left. 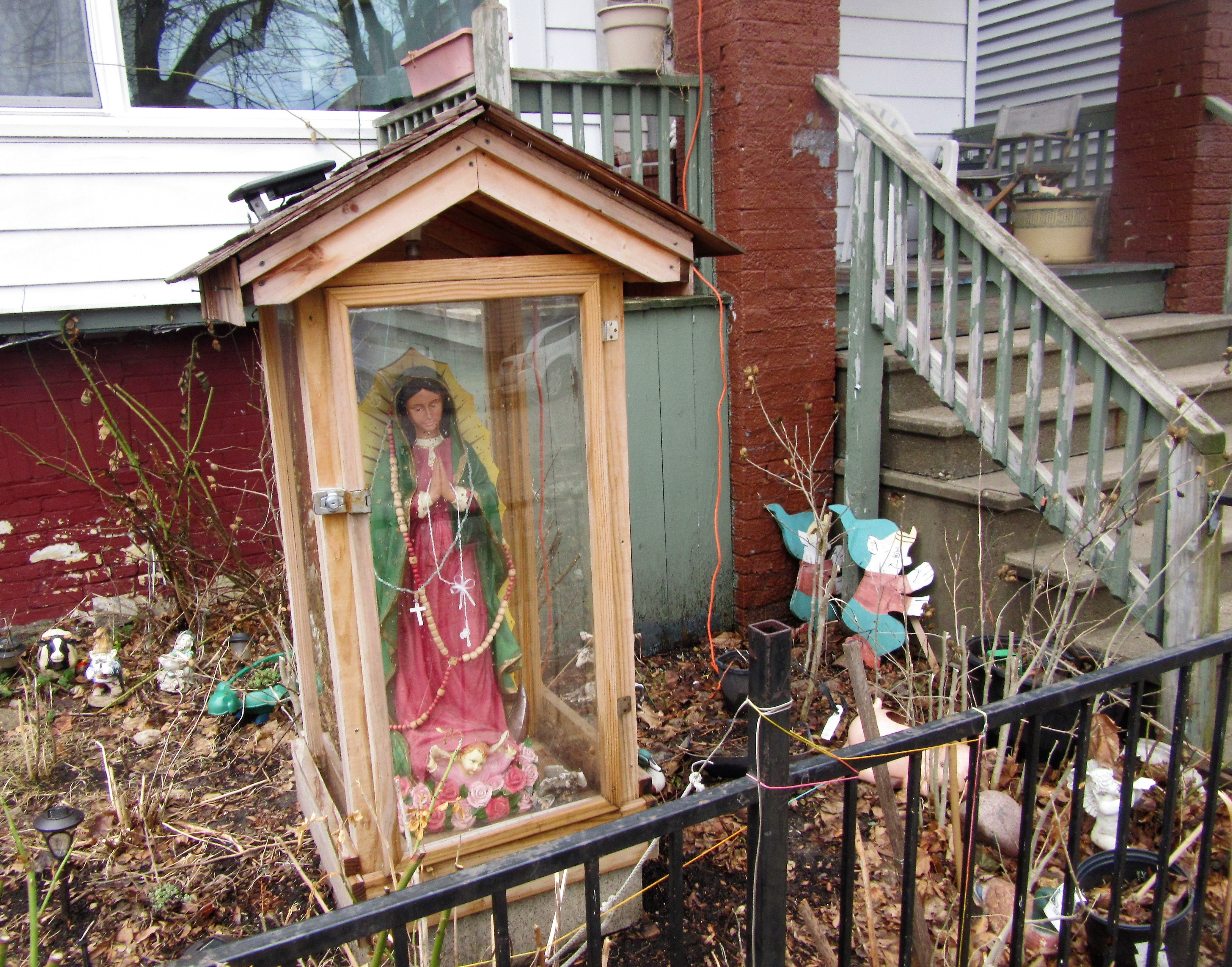 Here’s another charming Riverwest stereotype refutation, and a close neighbor of the Walker-protesting Marine above. Clearly not everyone in the neighborhood is a lefty secular humanist, agnostic or atheist. The number of venerable, still-active churches in the neighborhood testifies to that, even if their attendance tends lower than it was a few decades ago. But these Riverwest neighbors put their love of Jesus Christ’s mother Mary out front for everyone to see, along with the rather mischievous-looking elves scampering around to behind her. 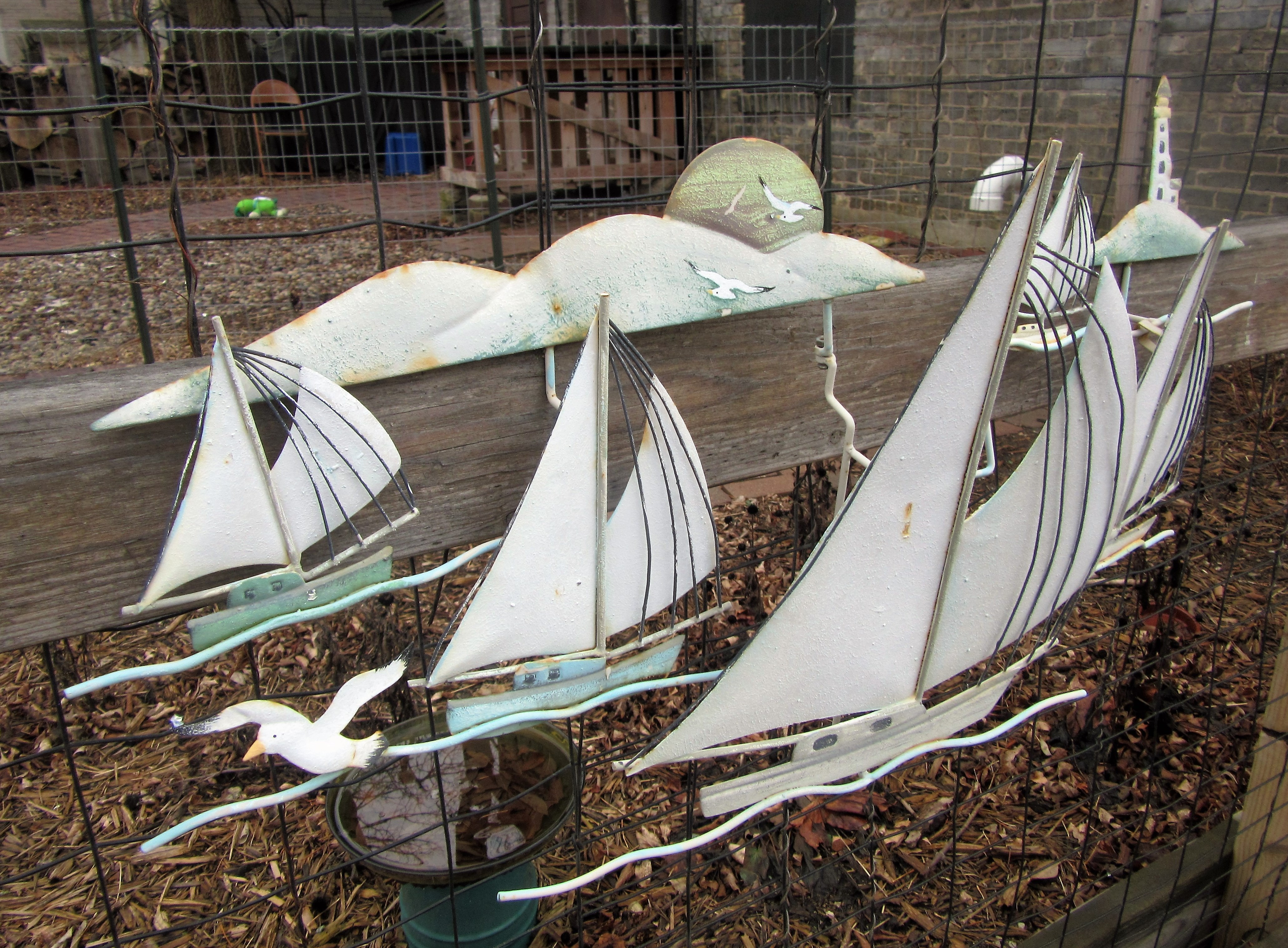 There is certainly a profusion of artistic types in our neighborhood and here’s a delightful example. This painted metal relief sculpture gives you an idea where this resident might be if not at home – out on the waves amid sun, the clouds, the birds and aquatic sea life. It alludes to how close we are to Lake Michigan, just across the nearby Milwaukee River for which we are named, and yonder, though Shorewood. 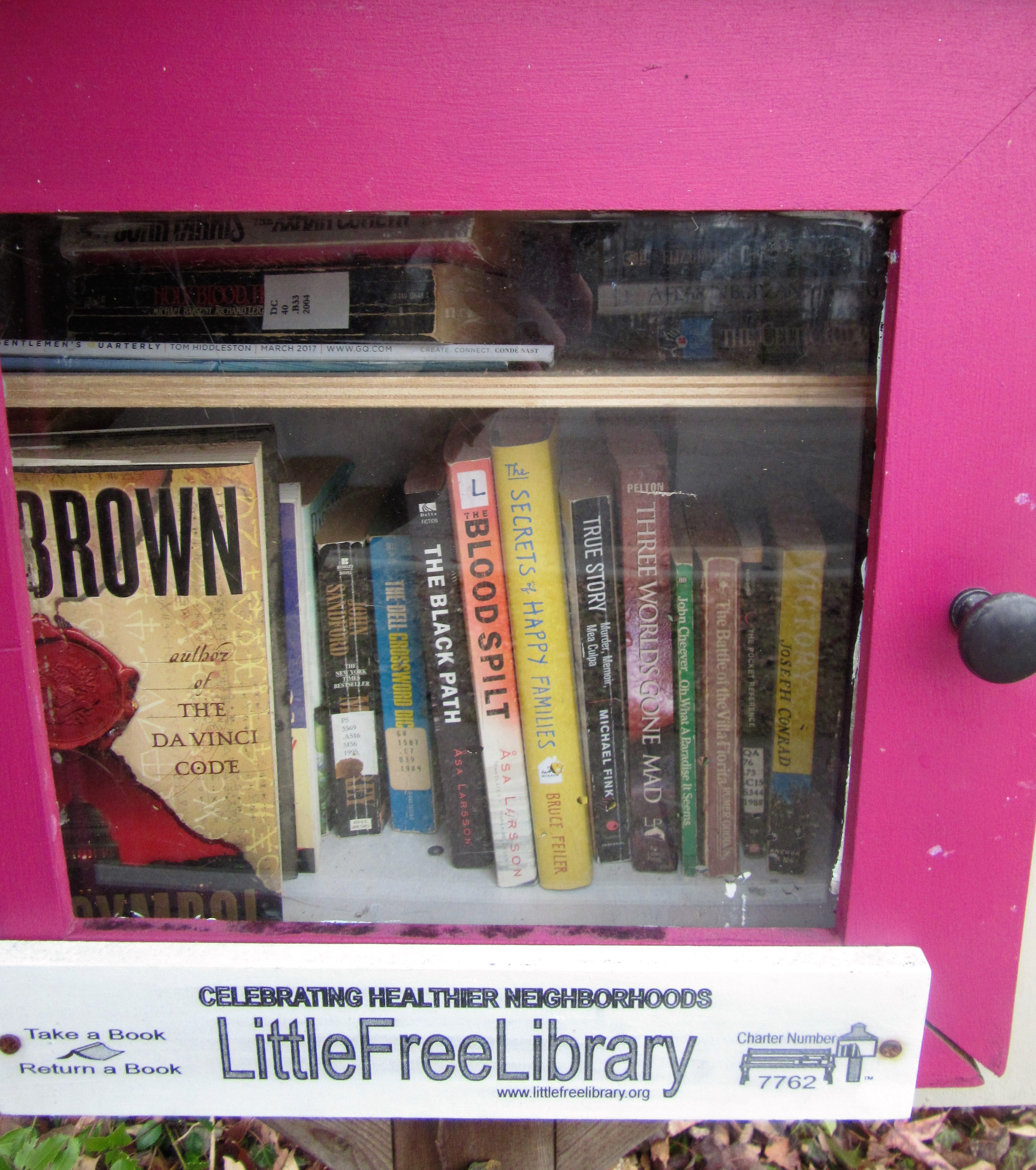 The literacy of Riverwest residents is somewhat of a given, but our valuing of the written word is something we share with our community. On my walk down my neighborhood street alone, I counted four “LittleFreeLibraries” such as this one. There’s some predictable titles, such as one by mega-selling Da Vinci Code author Dan Brown on the left. But also discover, if you look closely, a copy of the last book that the late, great John Cheever wrote, a slim novella titled Oh What a Paradise it Seems, a characteristically bittersweet observation, published shortly before his death of cancer in 1982. Also note, on  the far right, a novel by the great Polish-American novelist Joseph Conrad, author of Heart of Darkness, Lord Jim, Nostromo and The Secret Agent. This slightly less well-known Conrad novel is Victory published in 1915, a psychological thriller set on an Indonesian island, and which draws from Shakespeare’s Hamlet and The Tempest.

I stopped by Riverwest’s storefront radio station WXRW-104.1 FM, but it wasn’t on the air and so there was little to see. But it’s a very interesting station you can check out here:

So, I went next door to the Fuel Cafe for a newspaper, and a quintessential Riverwest moment occured. Several people were eating late lunches and, as I walked out, one man stood up with a tray laden with a scattering of tortilla chips. “Hey, anyone want the rest of these chips?” he called out. “Otherwise I’m gonna throw ’em out.”

“I’ll take ’em!” another dude piped up, and the not-so-secret sharer delivered them to him. At what other restaurant would you see such an open act of sharing between perfect strangers, regardless of conventional decorum? That’s Riverwest, for you. 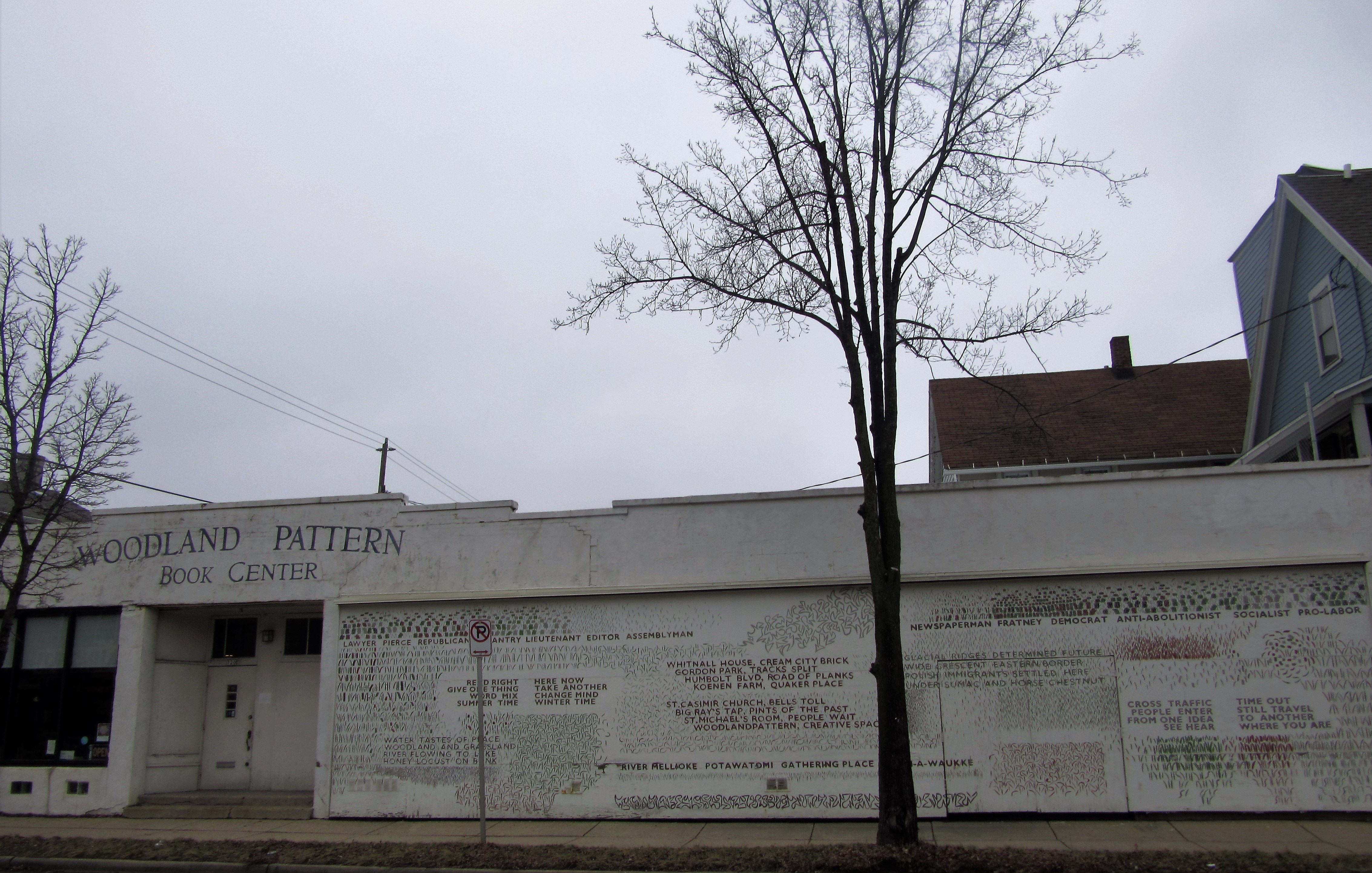 At the “fork” in one intersection, I took the path more traveled for me, which has often made all the difference. That led me to Woodland Pattern Book Center, on Locust Street, which may be the intellectual and perhaps, despite all the churches, the spiritual heart of neighborhood. 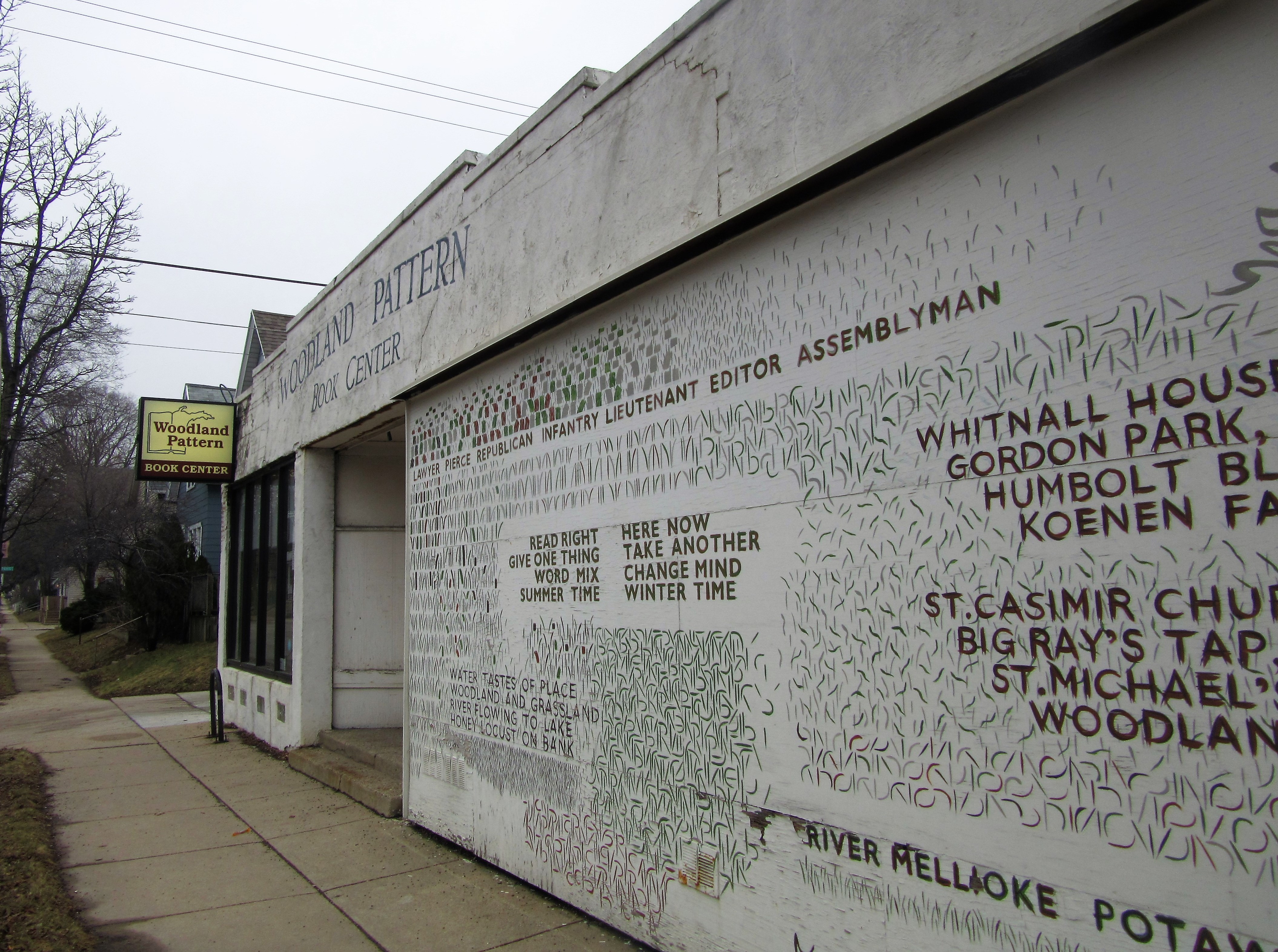 The long, white facade of the building announces it’s utterly unique nature. The facade changes from time to time, with varying names, quotations and imagery usually signifying human life, intellect and expression in relation to the grand natural environment we share. 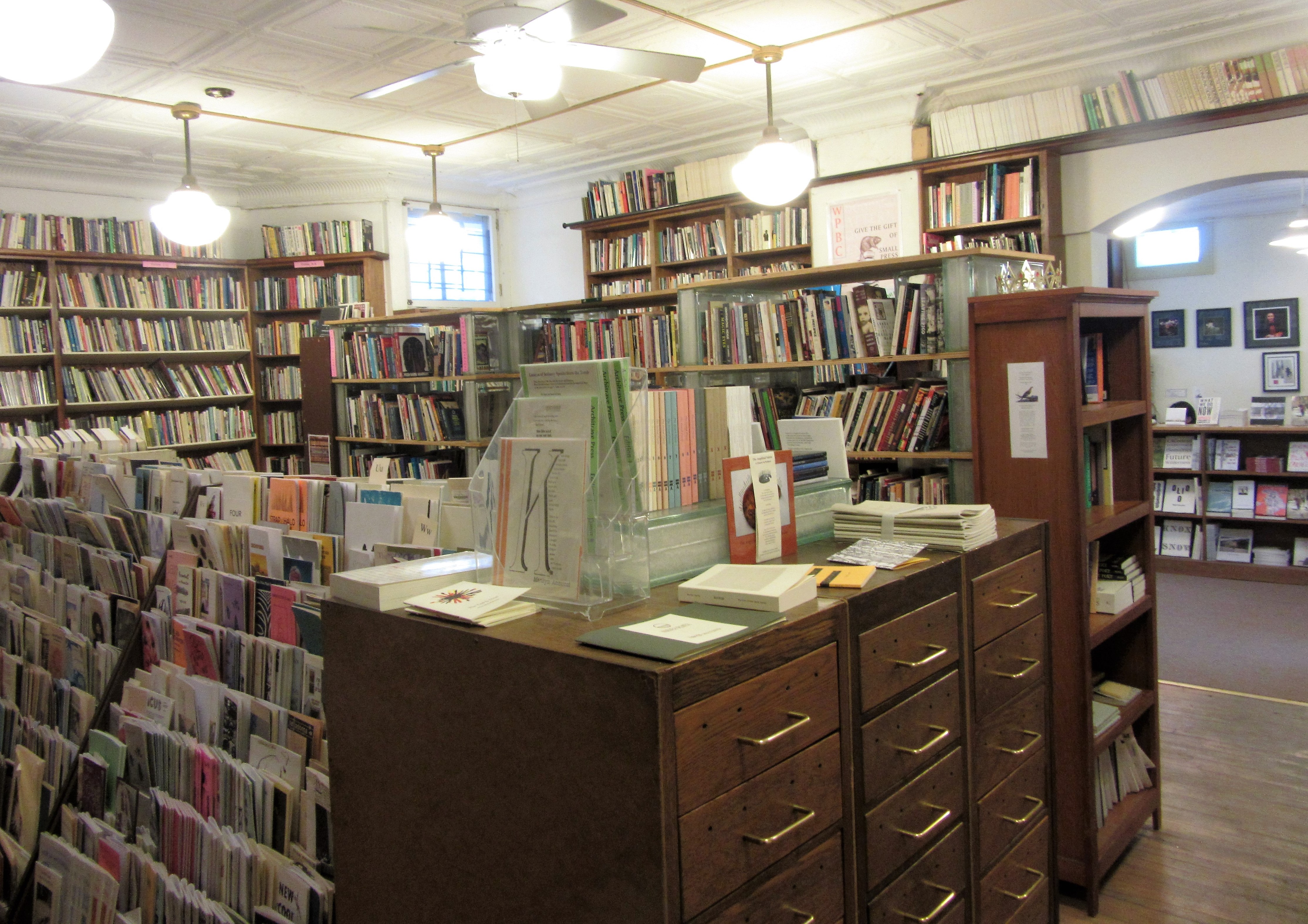 Woodland Pattern specializes in small press publications, and it may be the largest such collection in a bookstore between the coasts. You will especially find a vast array of poetry in full book form, and in numerous chapbooks on the card rack-like display in the photo above on the left, and even more of an eccentric collection of chapbooks in the file cabinets in the foreground.
The center, co-founded by artist Anne Kingsbury, regularly presents a stimulating panoply of cultural events – author readings, regular art exhibits in its far third room, and concerts of exploratory and avant-garde music, often improvisational in nature.
For all of this, Woodland Pattern sustains its highly non-commercial offerings by having established itself as a valuable state cultural resource.

So it gets a fair share of grants and government funding but also relies on the membership of its patrons. I renewed my membership on this visit, and picked up a small book by the great nature writer Barry Lopez called The Rediscovery of North America, which was actually a Thomas D. Clarke lecture Lopez gave in 1990, a sort of meditation on Christopher Columbus and the history of rampant exploitation of The New World’s astonishing natural bounty and indigenous peoples. The Spaniards began the cruel plunder, which continues as a large part of our capitalistic mentality and political culture. But Lopez also posits hope and evidence that we are “rediscovering” our own continent with a newfound caring, partly by listening to what our indigenous peoples and species have to tell us. 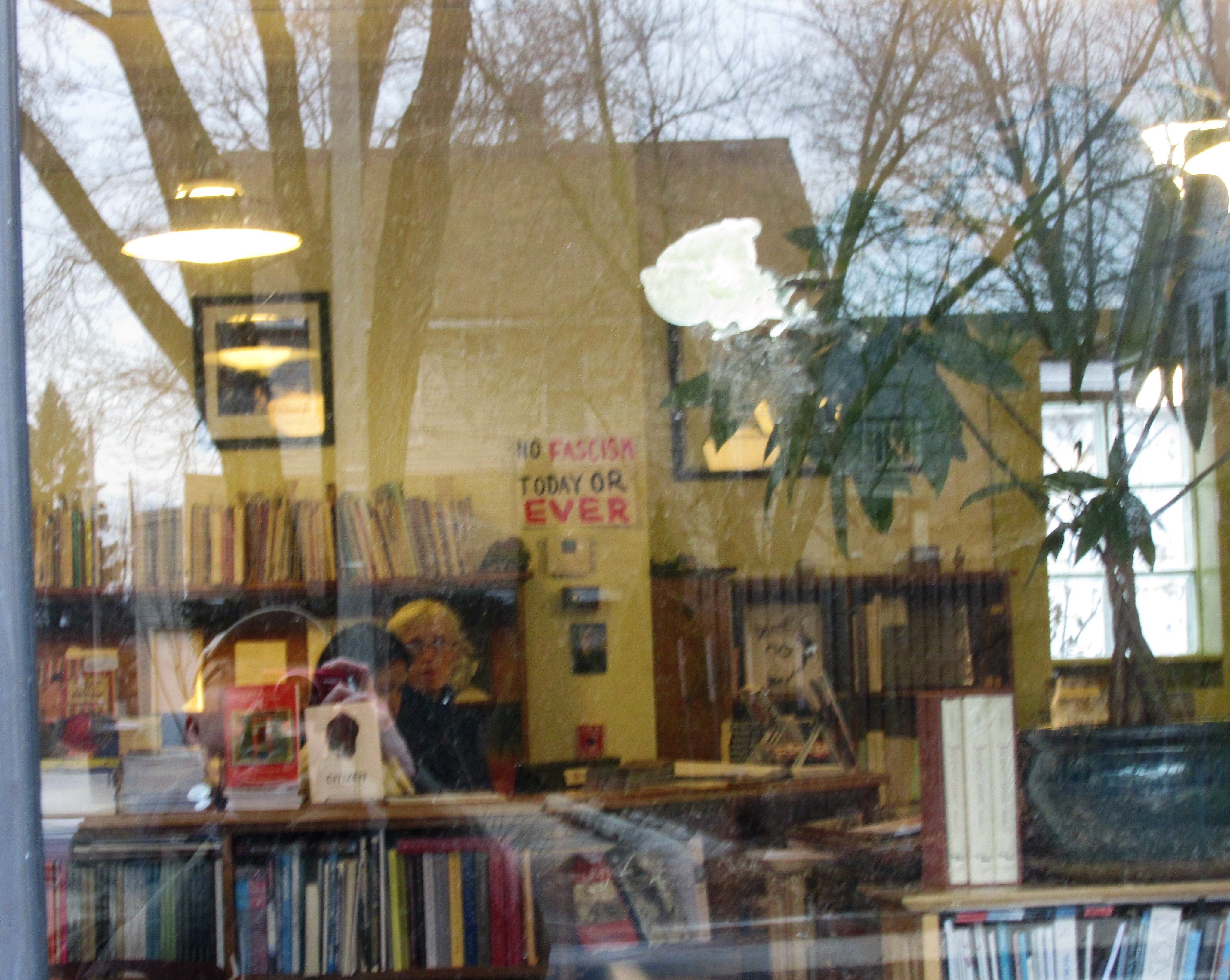 Before leaving Woodland Pattern, it’s worth noting the distinct and timely political consciousness that the store conveys, as evidenced by the sign in the middle of this photograph, taken from outside on the street.

I would’ve like to have stopped into another neighborhood institution, the Falcon Bowl Hall, on the corner of Clarke and Fratney Sts., but they were closed and, as a neighbor told me, they open maybe at five or seven but it’s very unpredictable. The Falcon bar has a bowling alley in his basement, a true working-class, middle-America past time that again goes against the grain of typical perceptions of this neighborhood. It will also host the Riverwest Follies at 7 p.m. Saturday, March 25.

Another closed place I bypassed this afternoon was the Jazz Gallery Center for the Arts on Center St., which continues the storied tradition of the original Milwaukee Jazz Gallery in its own way, as a multi-arts center, which I’ve written about quite a bit on this blog.

But another local bar did beckon me, shortly after 3 PM, with open doors, and typically alluring artwork. 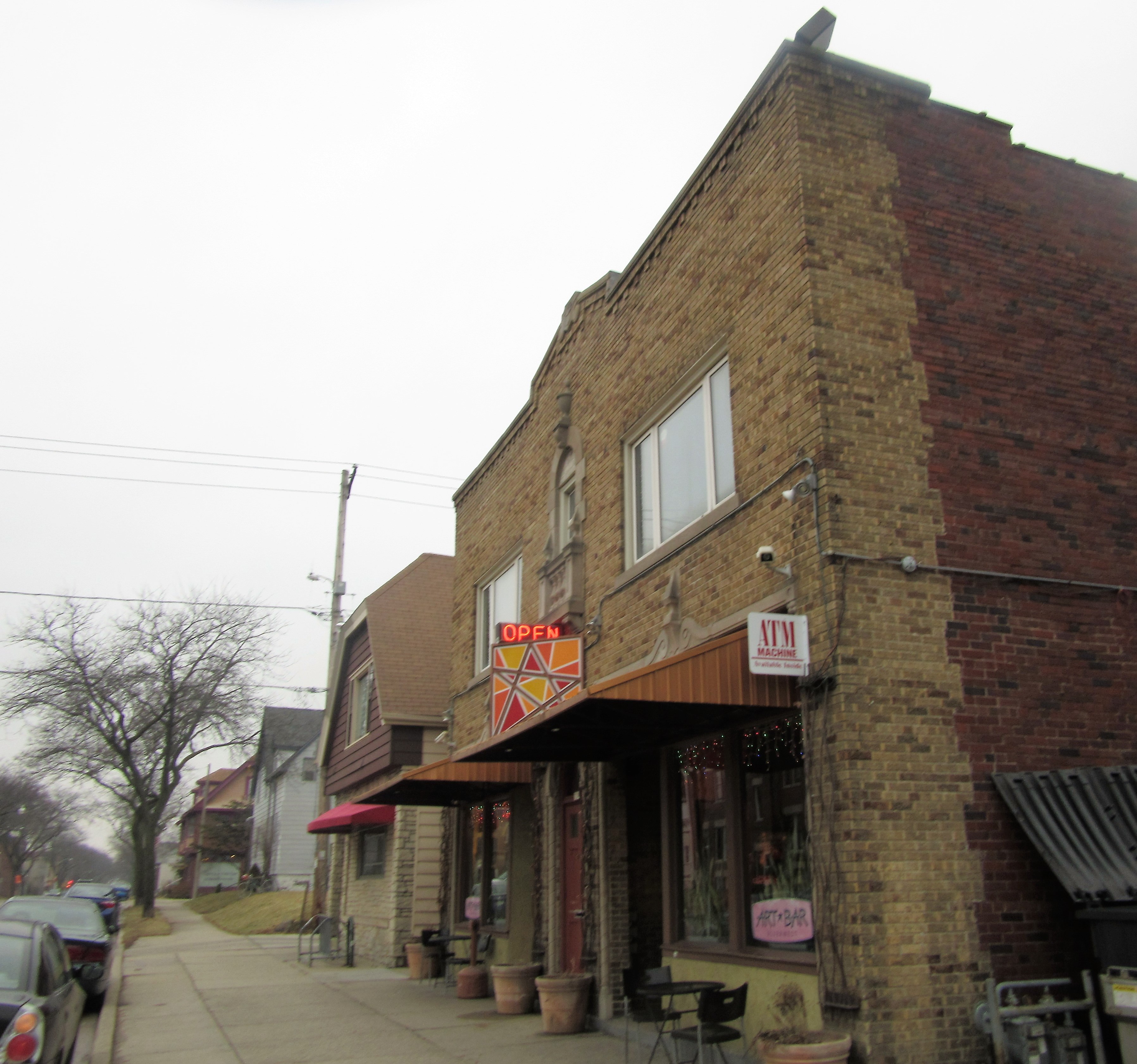 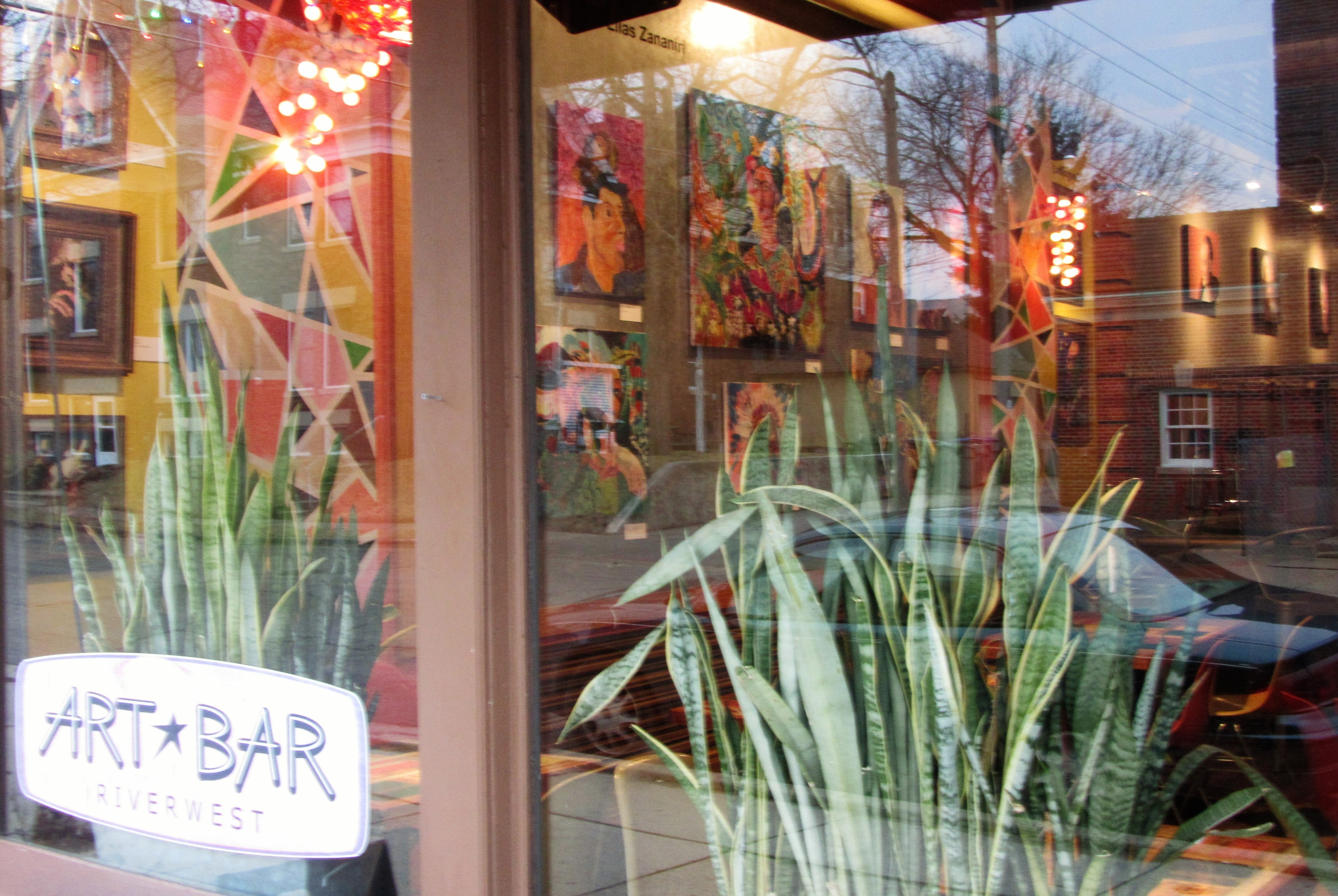 The Art Bar on Burleigh St. is my favorite tavern in Riverwest, and probably in Milwaukee, the city of taverns. That’s mainly because I’m more of an art lover than an alcohol imbiber. Besides the artwork in regular changing exhibits, the place also has a pool table and a dartboard, both which get regular use. Ah, but the art! Look above in another front-window shot, peeping in on the vividly colorful work on display, a  group show of portrait painters. 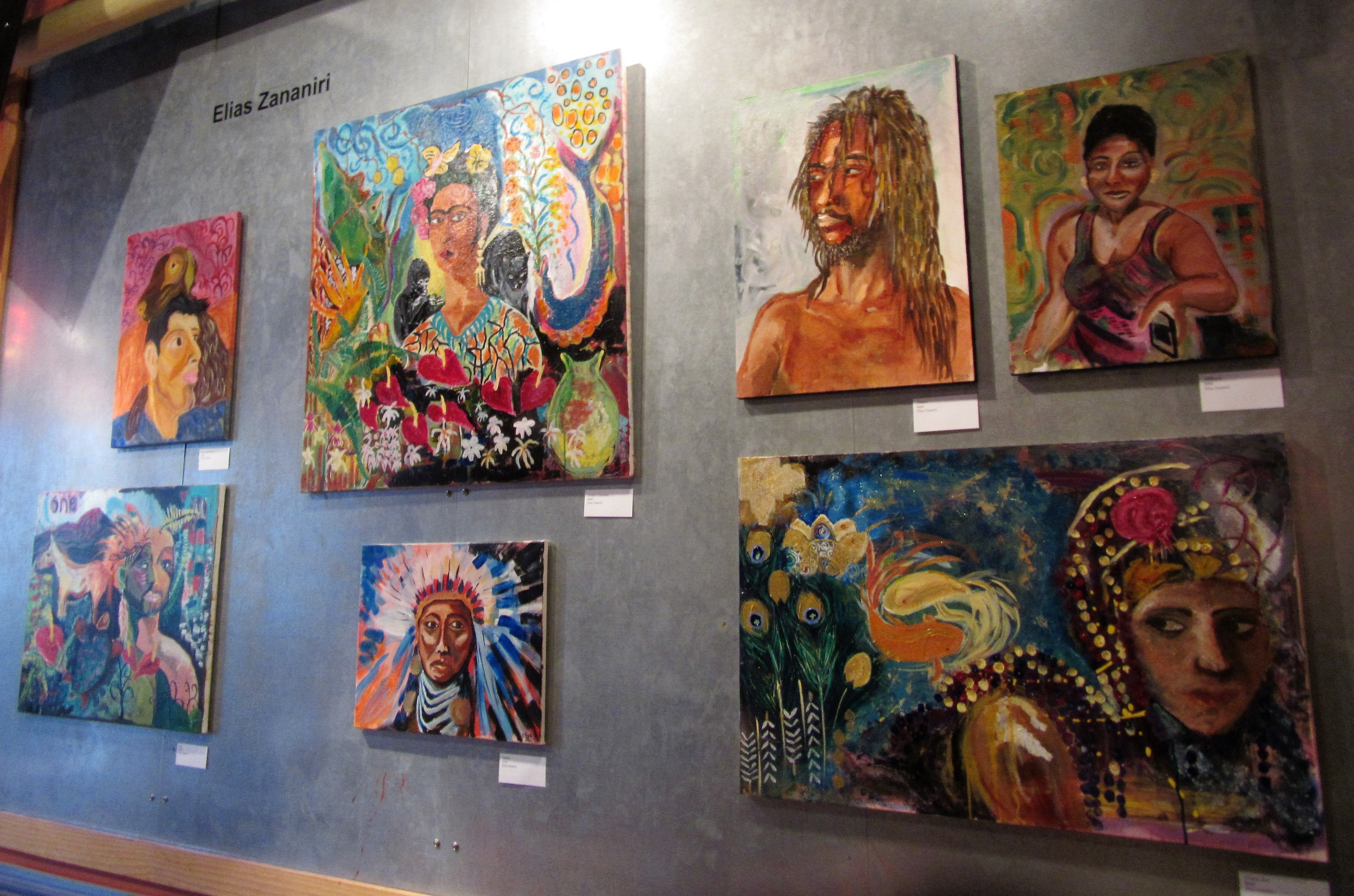 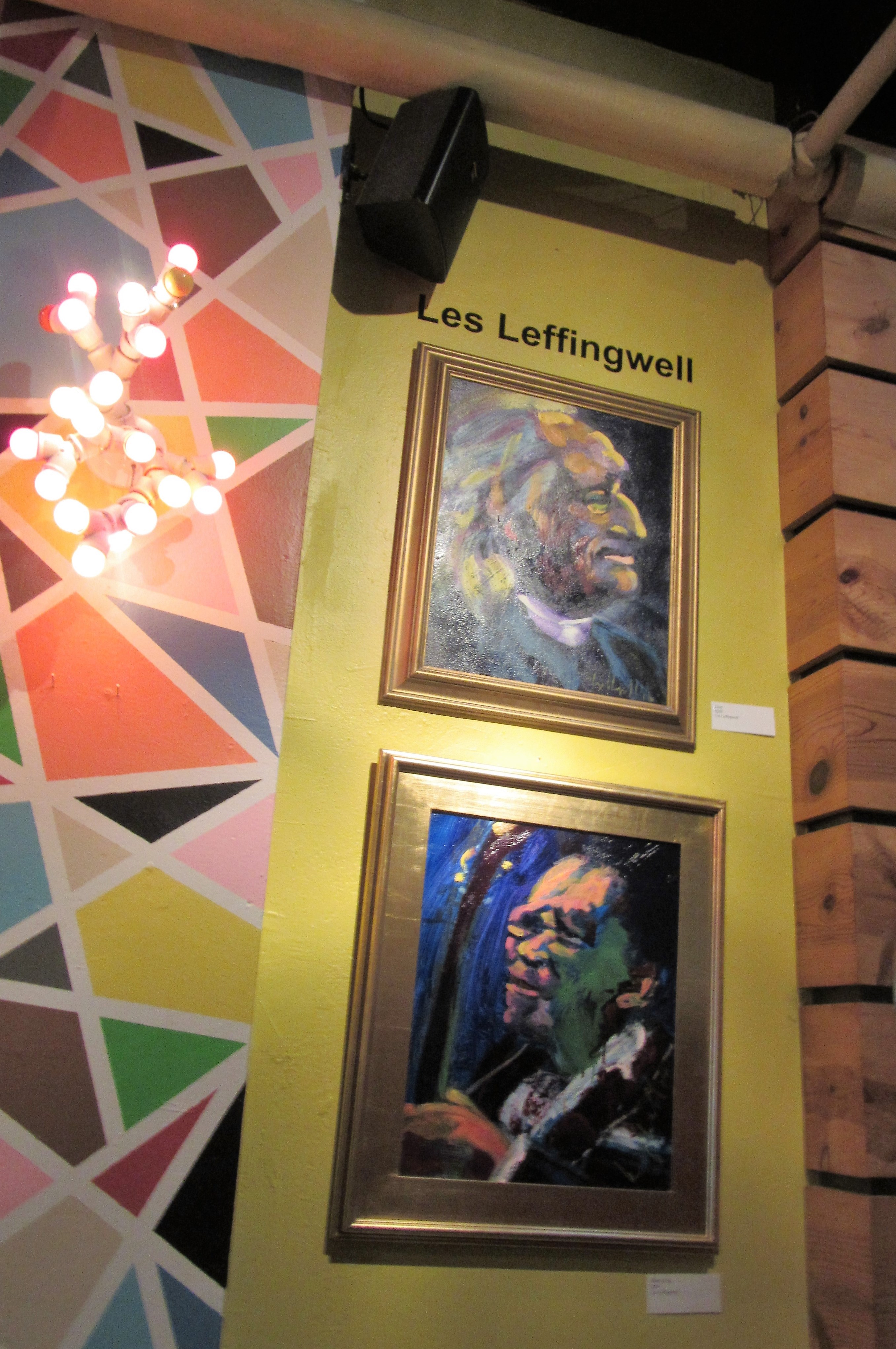 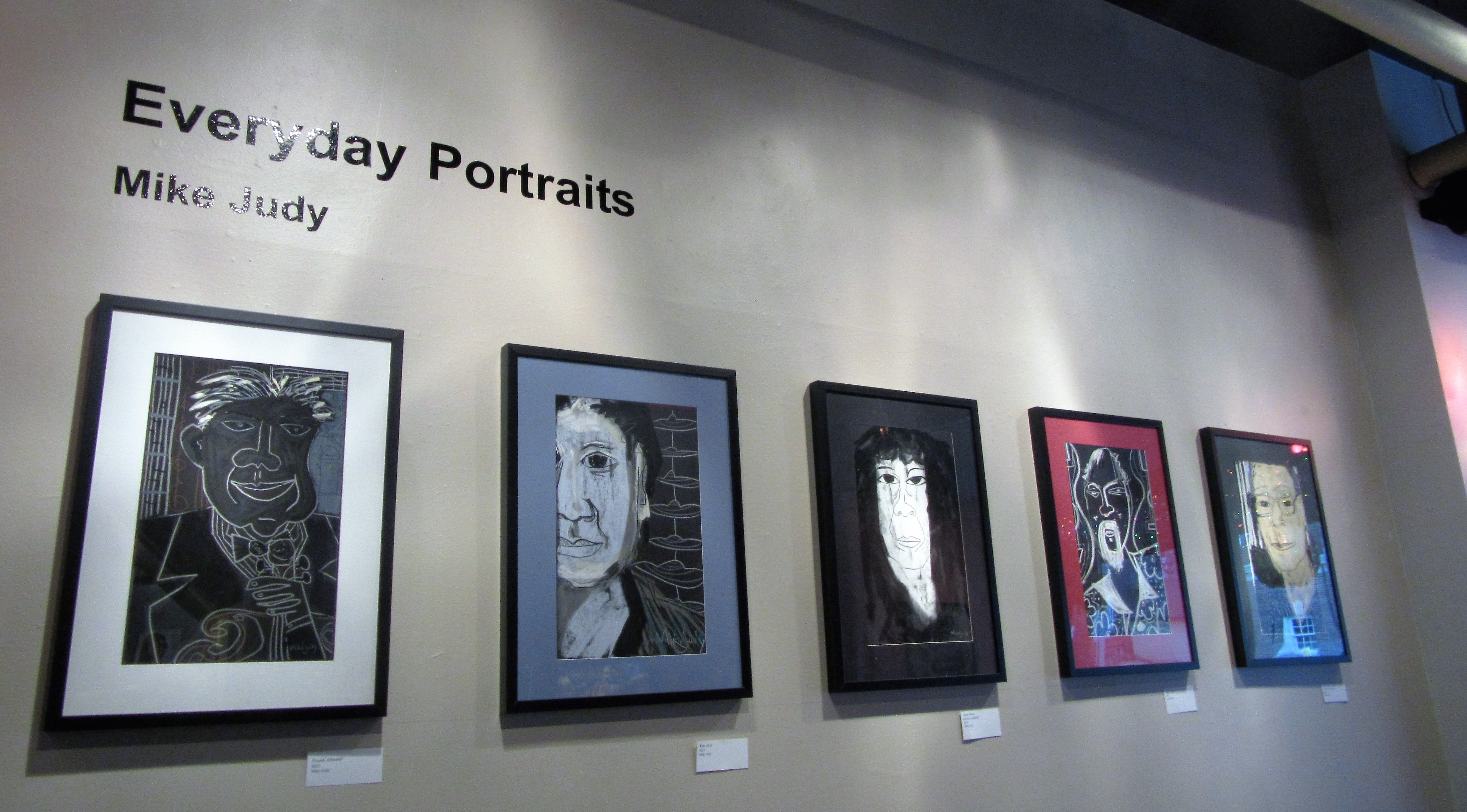 Mike Judy shows that an eccentric and humorous portraiture style can figuratively capture humanity with its pants down while allowing them a measure of personal dignity. 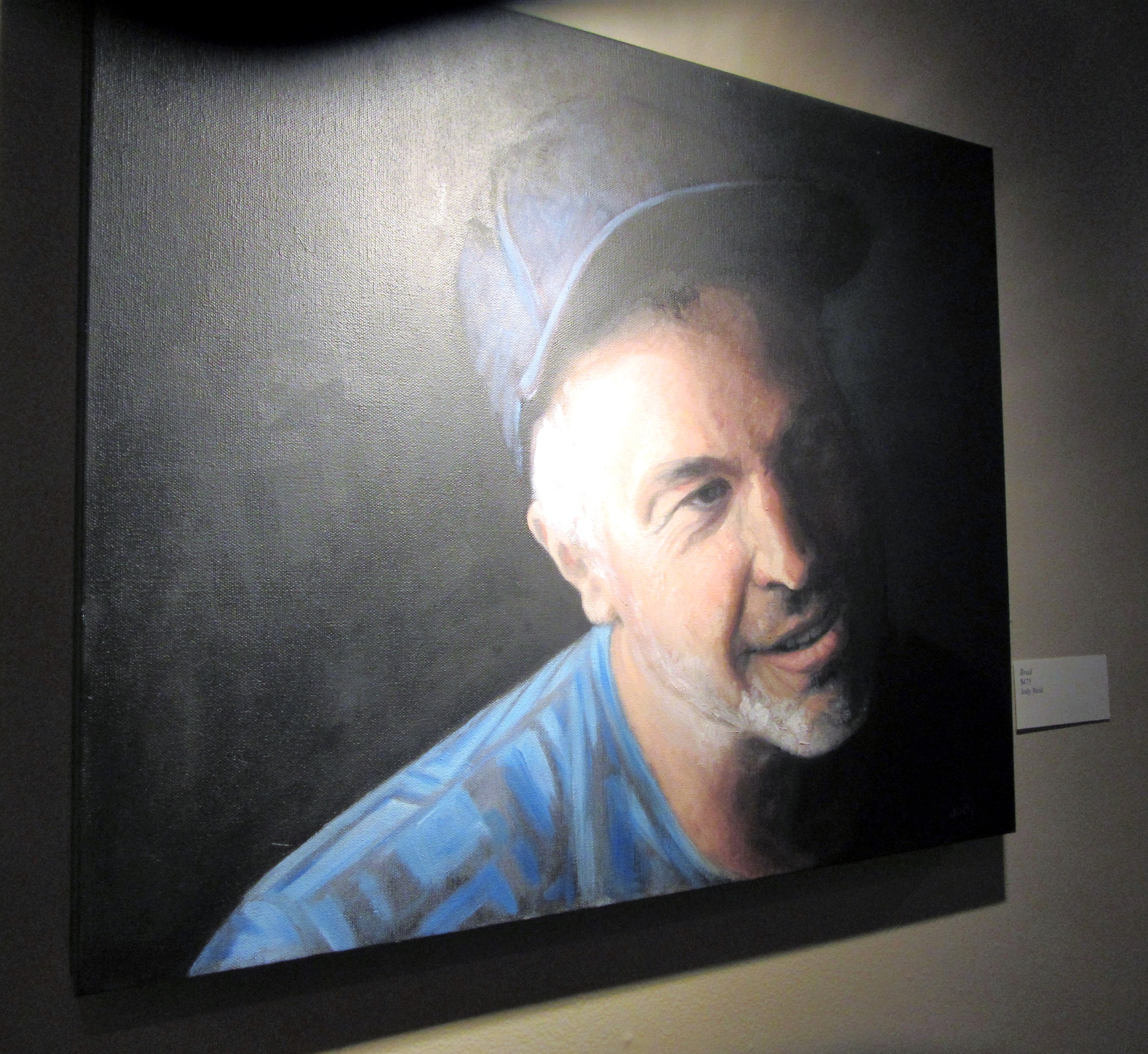 “Everyday Portraits” by Jody Reid includes this affectionate, virtuosic and insightful portrait of a guy named “Brad.” It’s worth zooming in for some of the detail of the oil canvas. 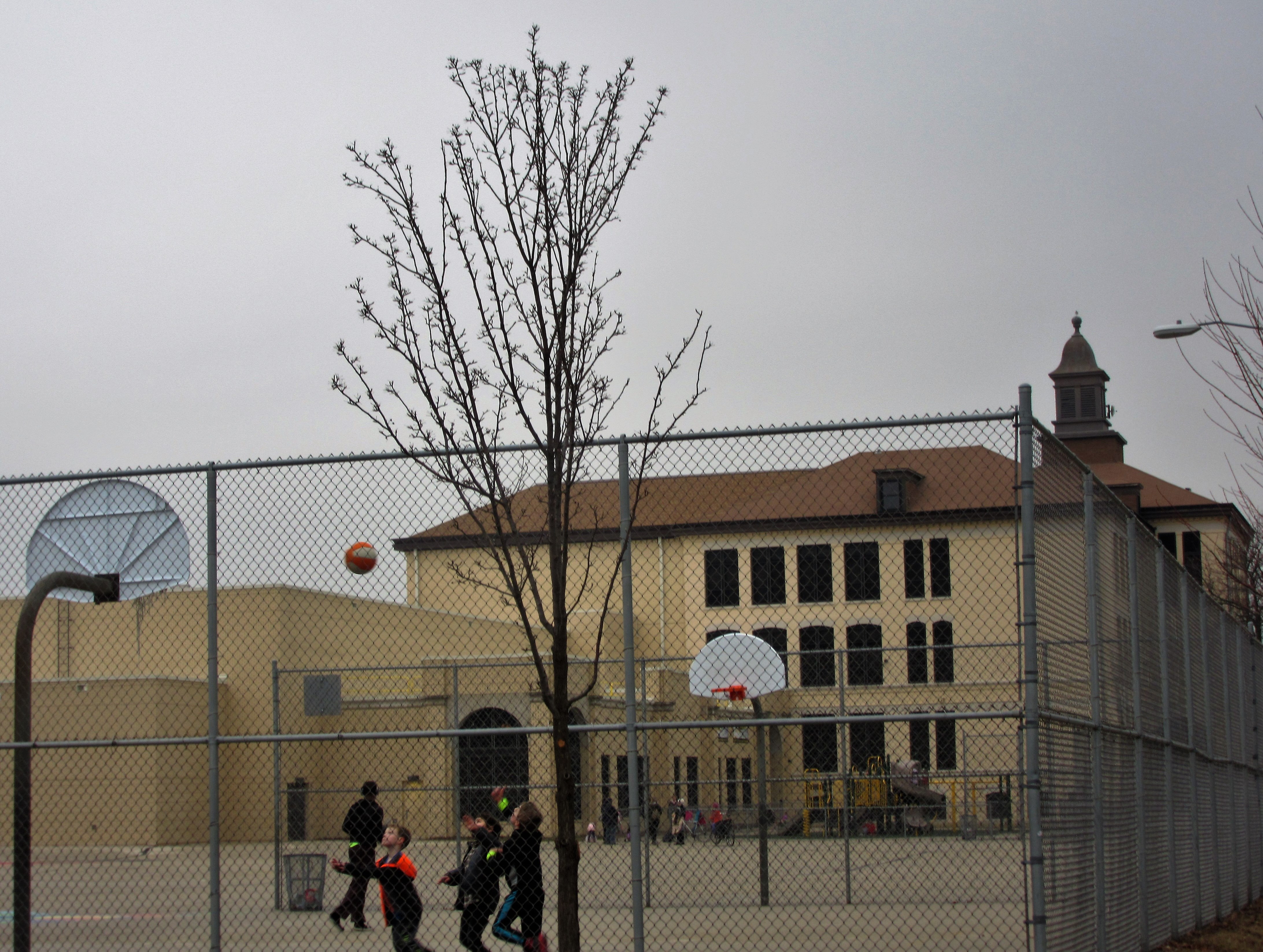 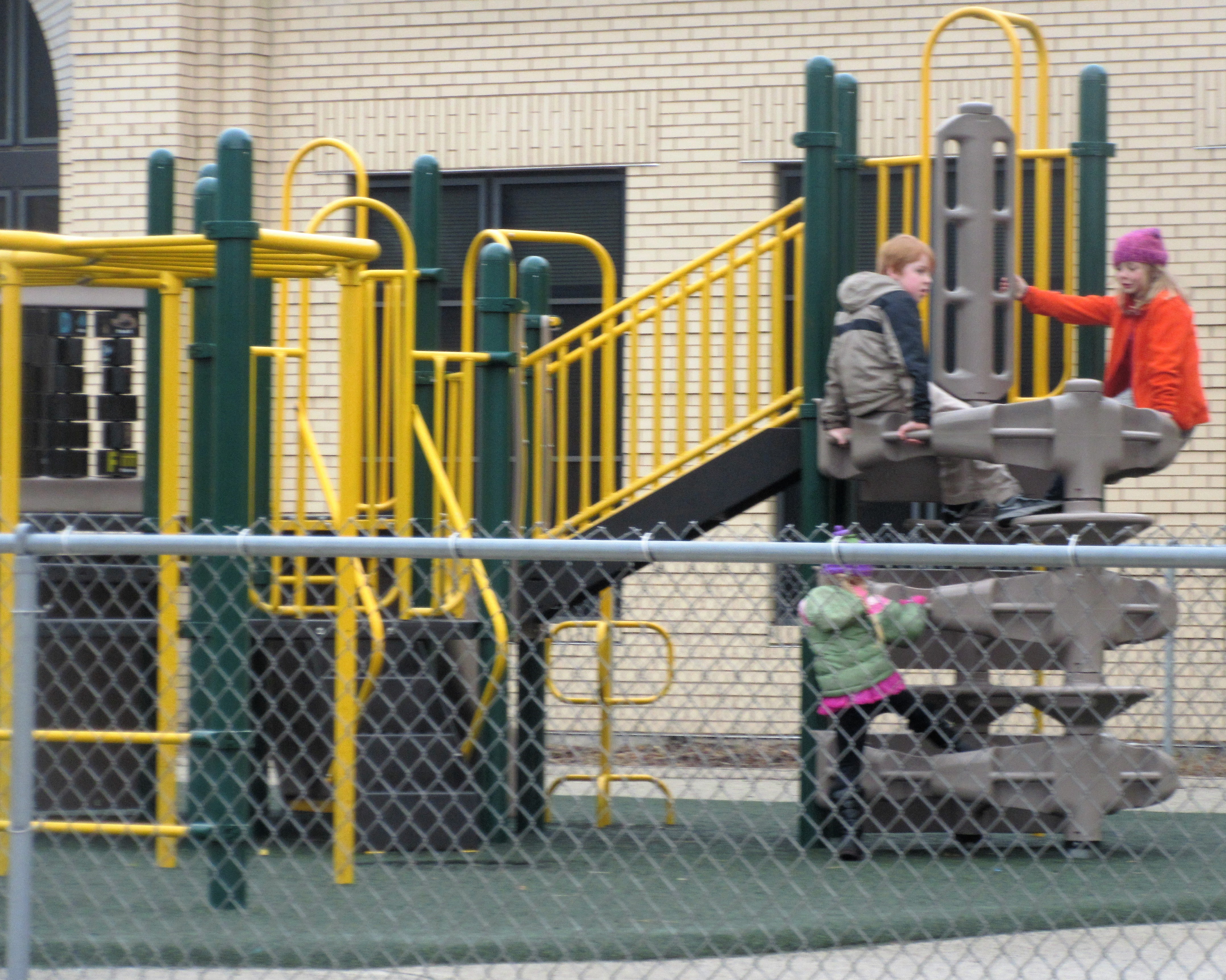 Further on down the street, I got to Fratney Street School, a highly-regarded bi-lingual elementary school, with some very small kids shooting a multi-colored basketball (top) and a very exclusive conference of two – make that three – young girls on this ingeniously engaging jungle gym. 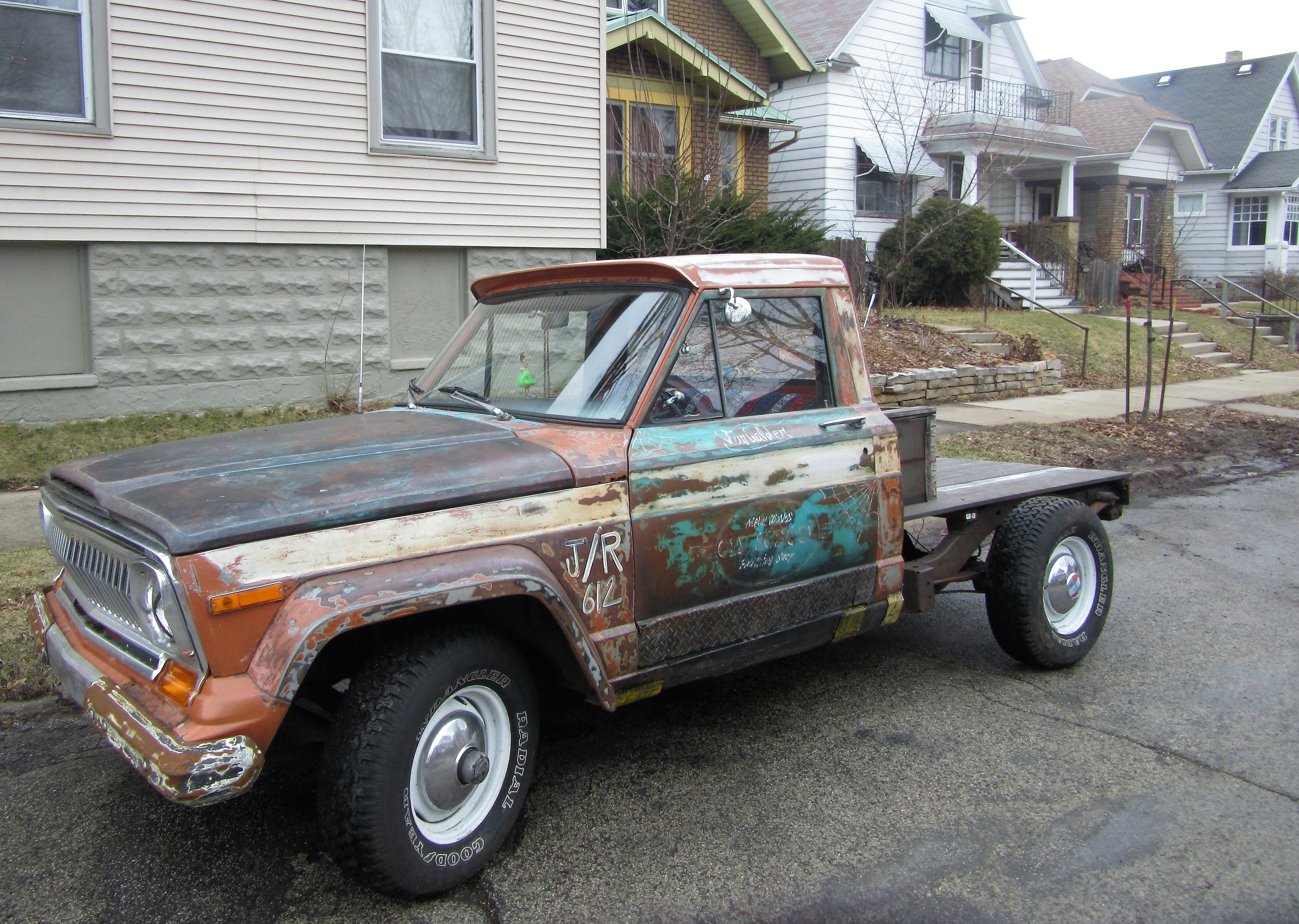 Riverwest also expresses itself in its vehicles. Like an almost-forgotten beauty queen contestant, this bizarre four-wheeled contraption was just waiting for its picture to be taken, and to be discovered. 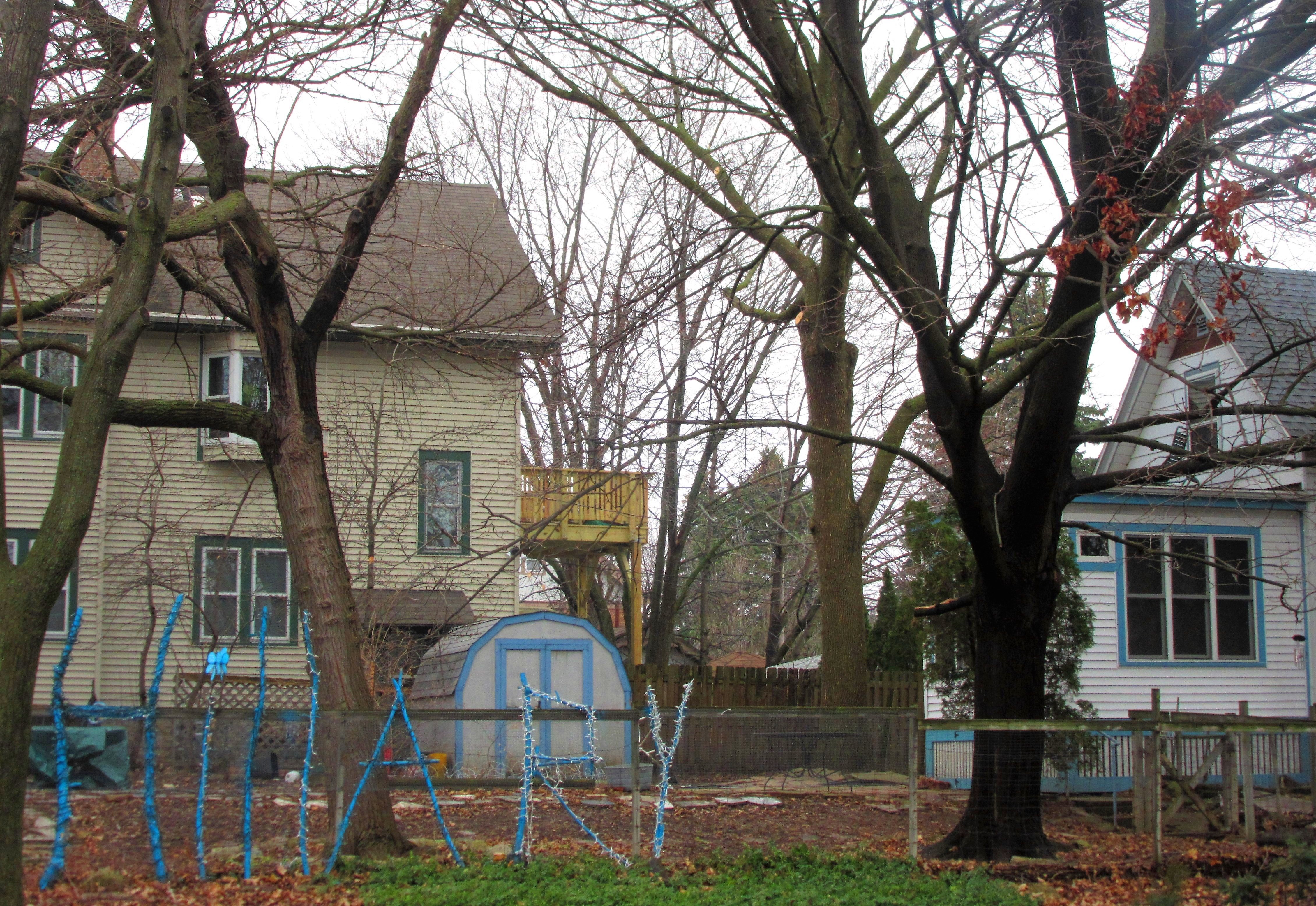 We began our little Riverwest tour with a home making a political statement and we end with another home doing the same. Like the die-hard “Recall Walker” dissenter, this ingeniously homemade HIllARY Clinton sign, made out of painted tree branches and wire – which blazes in the night with Christmas tree lights – remains proudly and defiantly up, in this very strange Age of Trump. We all know who the people’s choice was in this election.

T’was a relatively serene midweek afternoon walk, with not a lot of people out, but plenty of life still abounded in our good, old neighborhood.

6 thoughts on “Riverwest: a place with its own face, of curious and wondrous facets, and a couple of perfect strangers”