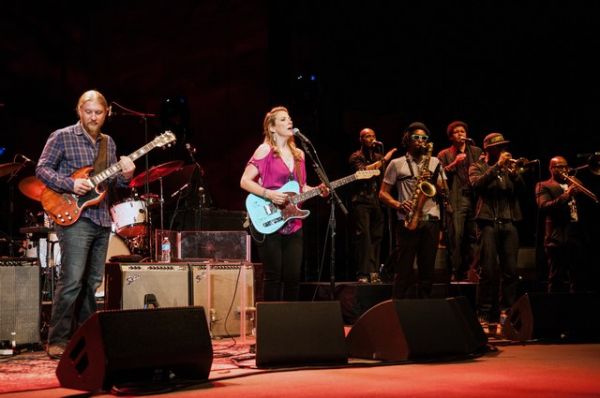 When Susan Tedeschi joined forces with Derek Trucks their combined surnames hardly made for a mellifluous moniker. But this crew is doing some of the heaviest lifting in contemporary music today, and delivering the goods to fresh and fertile places.

Their name’s assonance may grind like a 16 wheeler, but The Tedeschi Trucks Band hauls loads of subtle artistry along with its pile of stylistic influences. And with the results, I say, keep on truckin’.

Is Tedeschi-Trucks the best American band on the road today?

I can’t remember the last time I’ve felt compelled to ask such a question about a performing group, especially one who has only one studio album and one live recording.

It’s exciting to anticipate that they figure to have their best music ahead of them. Which is why, as they come close to the end of a long American tour (the final date is Oct. 27) it’s high time to assess this group’s startling impact. This sense of their fast ascendance is hardly just my impression or opinion. Consider the remarkably impressive average rating of the band’s current tour: 4 and one half out of five stars in 756 customer reviews on Ticketmaster. And 91% of these said they would recommend the show to a friend. 1

To fortify that live-concert poll, I’ll consider material that my blog readers can refer to: the band’s one studio album Revelator, their live recording Everybody’s Talkin’ and a number of You Tubes of concert footage.

Along with the extraordinary quality of the Grammy-winning studio recording, this group has become a phenomenon because of its in-concert range and dynamism. That’s demonstrated on the two record set Everybody’s Talkin’ album, which may find a ranking  among extraordinary two-record live rock albums worthy of their length: Bob Dylan’s The Royal Albert Hall Concert, Cream’s Wheels of Fire, The Grateful Dead’s Live Dead, Santana’s three-record set Lotus and the Allman Brothers’ Live at the Fillmore East.

I first got a sense of this group’s live potential when I saw them do Junior Wells’ “Little by Little” and Eric Clapton’s “Any Day” in the DVD of Clapton’s 2007 Crossroads Guitar Festival, when the couple toured with the current band’s predecessor, The Soul Stew Revival. http://www.youtube.com/watch?v=jiwktkw_rqE&feature=related

It was clearly evident how these performers could revitalize classic material with their cross-vernacular spin. “Any Day” was right in their wheelhouse, being from the Layla album by Derek and the Dominoes (a.k.a. Eric Clapton, Duane Allman and friends) which is a primary touchstone for guitarist Trucks’ style. (Trucks was named by his father — original Allman Brothers drummer Butch Trucks — for the Layla band’s mythical “Derek,” and Allman is admittedly his main guitar influence, along with Elmore James.) Here vocalist Mike Mattison shows his singing chops by sharing the lead vocals with Tedeschi. Truck’s solo climbs through vintage Allman Brothers licks — a hot melding of Duane Allman’s blues intensity and Dickey Betts’ lyrical ardor — and climaxes with some intoxicatingly woozy chords. It’s a performance that clearly gasses Clapton himself and emcee Bill Murray, among others, from the side stage.

I played this video for my cultural journalism class at Edgewood College and my students loved it. A couple of them came up to me afterwards and told me how much they enjoyed it, a rare occurrence.

Then came the band’s first album Revelator and, among other accolades, a Grammy award — which is not always an indication of the best recording in a given category. But in this case TTB’s 2012 Grammy for Best Blues Album indicates something that expands the blues category to its outer limits. And yet virtually nothing this group plays sounds outré or pretentious, unlike some of today’s big rock-pop acts, whose ambition can sometimes waterlog their artistry.

Okay let’s start with the core of the talent. How many would argue that this group doesn’t have the best combination of lead singer and lead instrumentalist of any group on the circuit today?

SUSAN TEDESCHI — The ravaged emotive textures that crawl out of her throat prompt the apt comparisons to Janis Joplin and Bonnie Raitt. But another predecessor dwells deeply in her style — Tracy Nelson, a still underappreciated contemporary of Raitt and Joplin. This is most evident in the bright, clarion alto that seems the real vortex of Tedeschi’s voice. 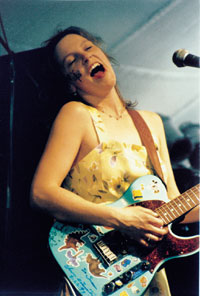 Nelson has long melded gospel, blues, rock and country, often with almost religious fervor, by contrast to the more secular sensibilities of Joplin and Raitt. Tedeschi often conveys a powerful sense of testifying, a pursuit of grace and redemption that feels authentic, especially in a song like the funky roof-raiser “Bound for Glory.” But also hear “These Walls,” about an impoverished woman who’s scuffling mightily since her man left. She prays “Oh Lord, don’t let these walls fall down.” Raised as a Catholic, Tedeschi found little inspiration in the church choir, so she attended predominantly African-American Baptist churches, feeling the music was “less repressed and more like a celebration of God.”
At the Berklee School of Music she sang in a gospel choir.

Yet as a mother of two, she shows no traces of, say, Joplin’s self-destructively desperate sexuality. And as an accomplished singer-songwriter-guitarist and bandleader of men in her own right, Tedeschi’s her own definition of a 21st-century liberated woman. If only Joplin could’ve lived to learn from her musical progeny’s apparently self-possessed wisdom. Being a Yankee from Boston (like fellow singer Mike Mattison, a Minneapolis-born black man) Tedeschi defies the estimable Muddy Waters dictum that “white kids…cannot vocal like the black man.” We know it ain’t a province of gender and today at least a few white Northern kids seem able to genuinely vocal the blues, perhaps because they did grow up in the culture, even if it was a conscious yet instinctive choice, as Susan’s was.

DEREK TRUCKS – He played with the Allman Brothers band as a young guitar slinger, and learned virtually all his primary bottleneck slide technique from the short-lived Duane Allman, mostly by poring over recordings and videos of the group. He was eight when Allman died in 1979 but Trucks had the virtuosic blues-jazz style down by 1993 (see you tube video). http://www.youtube.com/watch?v=-Iq1xw8-PtA

He retains a strong musical relationship with guitarist Warren Haynes who replaced Allman in the legendary band from Macon, Georgia that redefined Southern rock music virtually single-handedly. He was among the youngest ever to receive a Lifetime Achievement Grammy award this year, along with ten other members of the Allman Brothers Band. 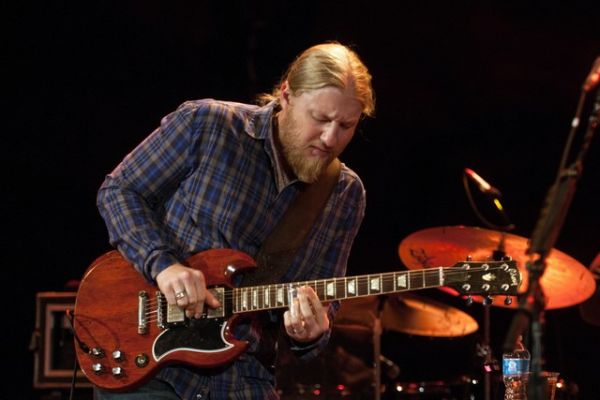 Trucks is ranked 16 in Rolling Stone magazine’s 2001 list of 100 Greatest Guitarists. At 32, he’s also easily the youngest among the top 20, suggesting the potential he has shown on Revelator and the groups long current tour. 2
Consider also that Trucks, Gary Clark Jr. and Trombone Shorty represented a new generation of blues musicians when the guitarist and Tedeschi (who’s nine years his elder) played for President Obama and First Lady Michelle Obama and guests on for the PBS TV “In Performance at the White House” series on February 21. Showcasing the importance of the blues in American culture, the event also featured B.B. King, Buddy Guy, Shemekia Copeland, Keb Mo, Mick Jagger, Keith Richards and other major blues musicians.

As an implicit seal of approval, King, surely the greatest living blues musician, has been performing on some dates of the Tedeschi Trucks current tour.

SONGWRITING – Perhaps the most surprising aspect of Revelator was that all 13 titles were originals written by this band. This was as crucial to the new partnership as their performing prowess. On Trucks’ previous band’s albums “Songlines,” and “Already Free,” (which earned him his first Grammy for Best Contemporary Blues Album) Trucks says he “was interested in making more song-driven records, and Revelator is another step in that direction.

“We have great players in this band, and everyone gets a chance to shine on this recording without straying from the focus of the album. It’s all about serving the song, supporting what Susan’s doing and building the whole sound up into something bigger than our own individual input.” 1

The band’s dynamics and songwriting skills are exemplified by “Midnight in Harlem,” a swaying, moon-lit melody and vividly rendered lyric: I went down to the river/and I took a look around/There were old man’s shoes/There were needles on the ground… which also reveals Tedeschi’s Bonnie Raitt-esque sensitivity and Trucks’ mastery of the Allman brothers’ lyrical strain in a jazzy groove. http://www.youtube.com/watch?v=OOE0QmC49IE&feature=related

This is the first of two postings.