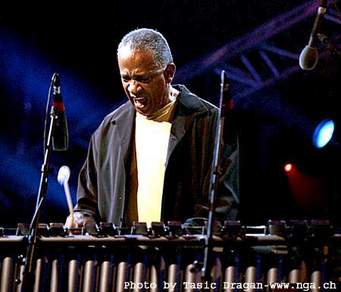 My recent blog appreciation of the great jazz vibraphonist and marimbist Bobby Hutcherson, who died August 15, prompted two first-hand remembrances of him, which I would like to share with readers.They provide insight into the personality and values of the man.

The first comment came from John Koenig, who produced the superb 1982 Hutcherson album Solo/Quartet (Contemporary/OJC), which combines several multi-tracked solo performances by Hutcherson, as well as several tunes performed with pianist McCoy Tyner, bassist Herbie Lewis and drummer Billy Higgins. I discussed the album in detail in that posting, here:

“I enjoyed your piece very much. Of course, I’m thinking a lot about Bobby, one of my favorite people with whom I’ve worked, in the wake of his passing. For all of the appreciations I’ve seen in recent days from musicians and commentators alike, it’s a pity he wasn’t more recognized in his lifetime. But as he told me once when he turned down a proposed recording project that would have paid him a lot of money for an album of Stevie Wonder covers, ‘I’m not trying to get a new car; I’m trying to get to heaven.’ And, of course, I appreciate being remembered and recognized myself. So thanks for that.”

Bobby’s comment about the Wonder proposal was perhaps a measure of his integrity and values as a jazz musician. I imagine he appreciated Stevie Wonder, but likely felt that an album of his songs would come too close to commercial pandering. He had made a modest amount of very accessible R&B influenced “soul-jazz,” including some tracks on his very last album with saxophonist David Sanborn, Joey DeFrancesco and Billy Hart, titled Enjoy the View.

But he was a true artist of the hammered jazz instruments that encompass melody and harmony, a man shaped in the 1960s when jazz was expanding its parameters, staking new and sometimes challenging ground. Of course, Bobby’s aesthetic embraced sonic and melodic beauty as well.

.  So it’s somewhat ironic that a group that he co-founded, the SFJAZZ Collective, ended up recording two albums of Stevie Wonder songs. Their instrumental arrangements are rich in jazz harmony and rhythm, and I suspect that Hutcherson liked the recordings and perhaps wished he had been on them. The first recording, Wonder: The Songs of Stevie Wonder won a NAACP Spirit award for a jazz recording, which I think is well-deserved for an album that reaches out beyond the “pure jazz” audience. The second recording Music of Stevie Wonder and New Compositions: Live in New York 2011 Season maintained the collective’s balance of repertory and original compositions.

The second Hutcherson remembrance came from Chuck LaPaglia, the founder and owner of the Milwaukee Jazz Gallery, which had a memorable run as a national and regional jazz showcase in the late 1970s and 1980s. Paglia went on to do musician booking for Yoshi’s, the San Francisco jazz club and restaurant. This charming remembrance is part of an introduction LaPaglia is writing for the online version of Milwaukee Jazz Gallery, an anthology of the extensive journalistic coverage his club commanded during those years (disclosure: The anthology includes a number of articles and reviews by this writer).

LaPaglia recalls the first time Hutcherson came to Milwaukee with his quartet in 1979, shortly after his primary influence Milt Jackson had played at the club:

“The next full band to play the club was the Bobby Hutcherson Quartet on October 29, 1979. For me, it was a particularly happy occasion to be able to hear Bobby one month after hearing Milt Jackson. I was especially sensitive to the vibes, having grown up with another great vibes player, Carl Leukaufe. The band drove from Chicago and arrived the afternoon before the gig. I was in the bar room when they showed up.

“When they came into the club they seemed to have some sort of attitude. I wasn’t sure what their problem was, but they seemed stiff and formal. The first night they got such a warm reception and such close attention from the audience that it completely turned them around. They suddenly were the nicest jazz musicians you’d ever want to meet.

“They left on Halloween. As they were outside the club packing up the car, a Halloween parade of little kids from the local grammar school came marching down the street. Bobby ran half a block to meet them, and then proceeded to lead the parade, twirling an imaginary baton. When he got back to the corner, he got down on his knees and blew kisses to all the kids as they passed by.”

Hutcherson was a human who suffered, and ultimately died, from complications of Emphysema. My thanks to John and Chuck for adding a bit more dimension to our understanding of this human, and perhaps the greatest artistic proponent of the vibraphone in the second half of the 20th century.