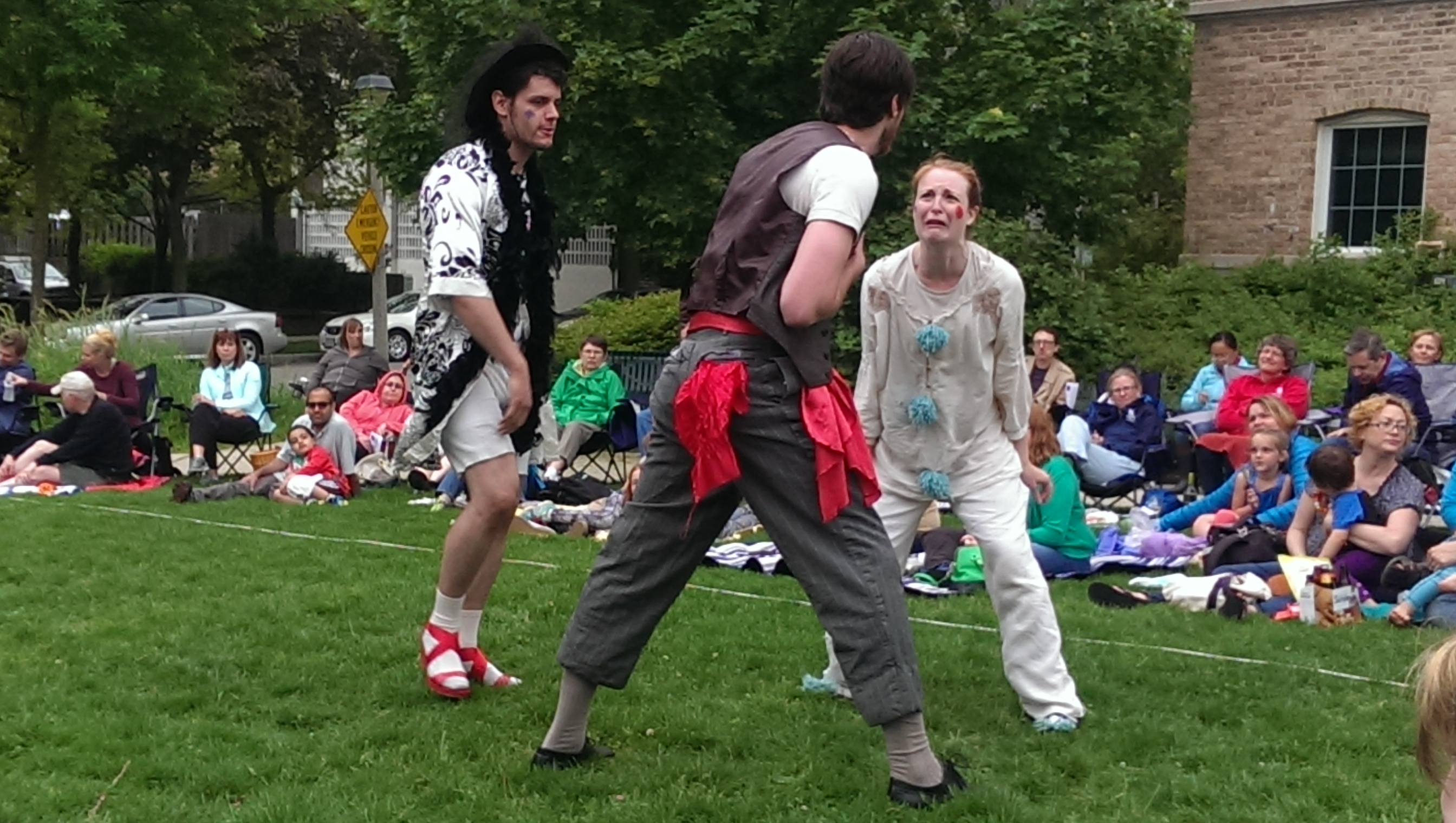 Antipholus (Ken Miller, center) and his servant Dromio (Nicole Goeden, right) are befuddled enough by encountering their estranged identical twins. Here, they also have to deal with a courtesan played by Ian Muenther, in Stone Soup Shakespeare’s “Comedy of Errors” at the Shorewood Public Library. All photos by Ed Valent unless otherrwise indicated.

After a Sunday Sheboygan performance, in which the company played through a huge cloudburst, their summer tour of Comedy will conclude with dates in Nelson Park in Decatur, IL on June 10; Mineral Springs Park in Pekin IL on Saturday, June 11, and Senior Citizens Memorial Park in Chicago on Sunday June 12. , IL. See information on Stone Soup Shakespeare and their remaining tour dates here.

“I to the world am like a drop of water that, in the ocean seeks another drop that falling there to find his fellow forth, unseen, inquisitive, confounds himself.”

The timeless magic and the madness of live theatrical performance — in a virtual reality-removed world – felt palpably alive when Stone Soup Shakespeare performed its gloriously low-tech version of Shakespeare’s Comedy of Errors at the Shorewood Public Library Saturday.

The “madness” is the company bucking the seemingly inexorable technological zeitgeist by doing Shakespeare in free performances that bend and stretch dramatic principles but reach for the sky, in both their fairly strong textual fidelity and effort to touch ordinary people who might never otherwise go to a Shakespeare production.

The magic came in how they theatrically conjured an entertainment so witty, dynamic and ingenious with only their bodies and a few hand-crafted props that you sat in wonder when you weren’t giggling or laughing. That experience seemed evident in an audience ranging from toddlers to folks in their 90s. 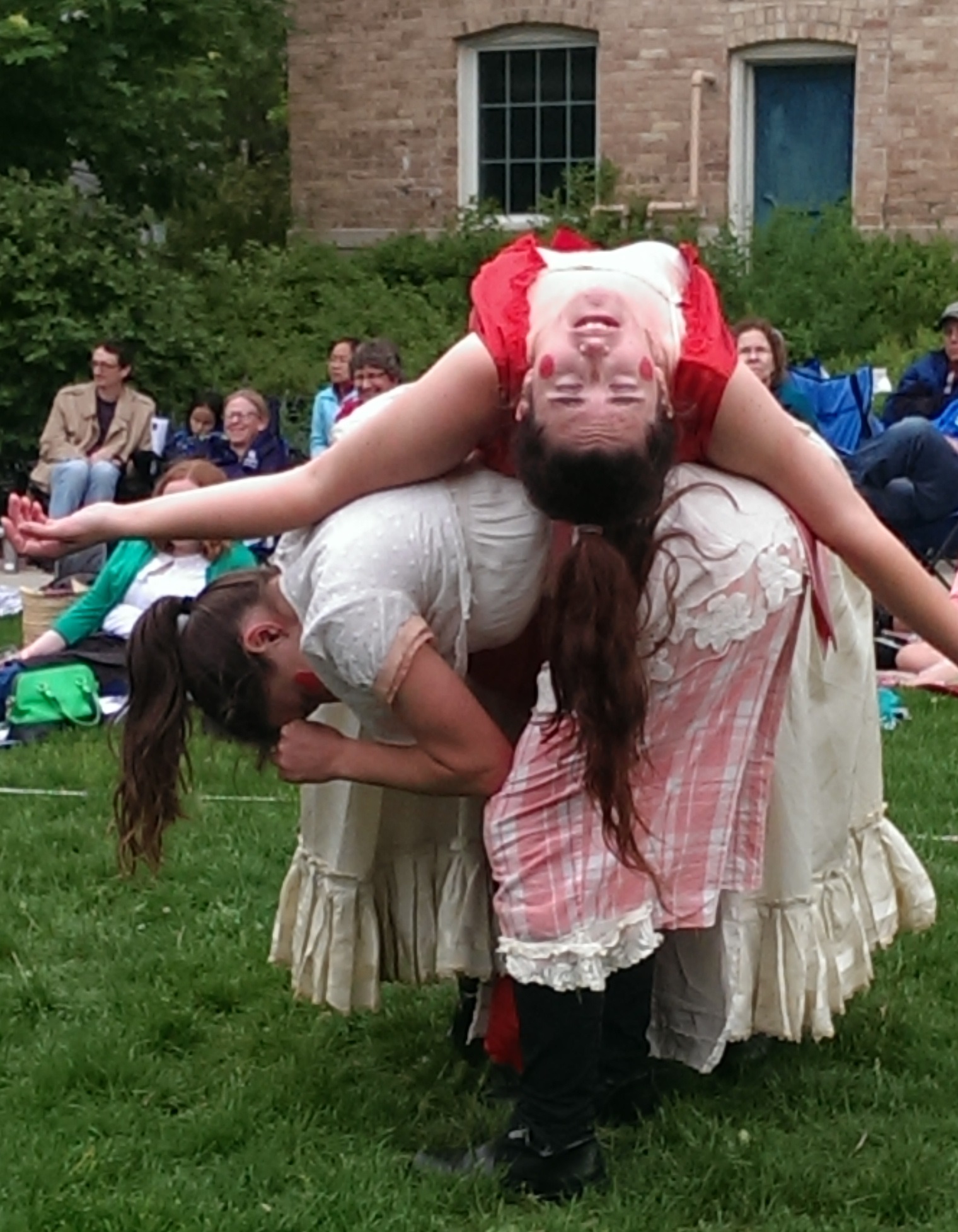 “I don’t like Shakespeare, but that was fabulous,” enthused playgoer Frank Pipp, a middle-aged man from Fox Point, who later declared that he might now take a class in Shakespeare. Such a genius is always worthy of study. But Stone Soup proved that you don’t need to, and even if you didn’t quite follow some of the play’s fast action and mistaken-identity mind bending, you got plenty of the play’s comic genius, especially with the smart, energized elan of this Chicago-based company. 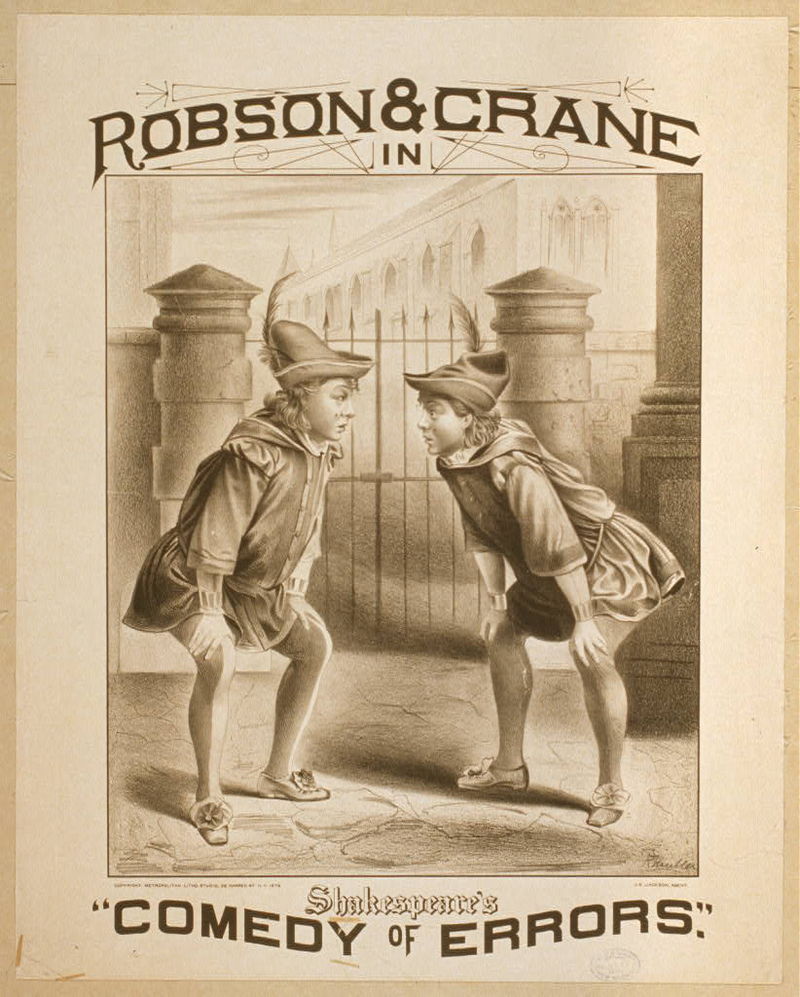 A poster from an 1879 production on Broadway, featuring Stuart Robson and William Crane. Courtesy wikipedia.org.

Indeed these young Shakespeareans have mastered their stage craft to approach the ease of a Charlie Chaplin or Buster Keaton defying physical limitations to broaden the possibilities of comic art. And yet, as far as I know those comic greats never attempted Shakespeare. 1

So, as a fine mist fell over the library green space in a cool June dusk, this company entranced and delighted an audience by doing Shakespeare on their terms, which brings his work to vivid life in a way that I think even he might’ve delighted in.

Comedy of Errors does have a story line, being a “family reunion” story, of sorts. But it is constantly subverted, twisted and goosed by Shakespeare’s devious string-pulling, based primarily on an improbable but not impossible circumstance of doppelganger goofiness flirting with tragedy. The company’s online synopsis posed the situation thusly: “What do you get when one pair of estranged twin brothers (both named Antipholus) and one pair of twin servants (both named Dromio) all wind up in the same city for the first time ever, completely ignorant of the others’ existence?”

As David Newell has commented, “This unlikely expansion of a classical formula is fun for the audience, but a nightmare for its victims. But the bewildering dream experiences of the visiting Antipholus convince him that  Ephesus (an ancient Greek city in present-day Turkey) is a hotbed of sorcery and deception.” The social germ of the chaos is that “there is nothing like the natural mimicry of twins to pull the plug on solemnity and dignity.” 2

A young man named Antipholus comes to Ephesus in a long search for his long-lost twin brother. Things quickly turn both weird and capitvating for him.

The backdrop is that the Antipholus twins’ father, the merchant named Aegeon from the ancient Sicilian city of Syracuse (Ian Muentener) is condemned to death for violating a travel ban between the two cities. This dramatic circumstance resonates in our current times of public concern and policy, both rightfully fearful and paranoid, over immigration and terrorism.

Without a formal set to evoke the mise en scene totality of a city, or an abbey late in the play, the company treads lightly on the play’s dramatic aspects.

But that works because Shakespeare created a play that is seemingly magical and absurdist centuries before The Theater of the Absurd. For that matter, The Bard’s play anticipates by centuries The Marx Brothers, the modern masters of comic chaos in, for example, the way several characters toy with their own identities and presences with full length mirrors (made here of large cardboard and tin foil) with which they spin, self-regard and hide behind. Think of Groucho’s famous routine with his “mirrored” self in Duck Soup. Shakespeare probably knew intimately the farcical potency inherent in doubled identities, being the father of twins.

Stone Soup’s DIY theatrical dynamics make the production hang together like a great gyrating amoeba rolling through time. They even ride that dynamic at times, with a wonderfully evoked ship on the high seas. No wonder Antipolous feels like a drop in the ocean searching for his fraternal drop.

At other times, they ingeniously employ audience members as props, without dragging anyone out of their seat. One viewer suddenly became, in effect, a tree stump to hide behind, and his personal existential reality might have shifted slightly in that moment. 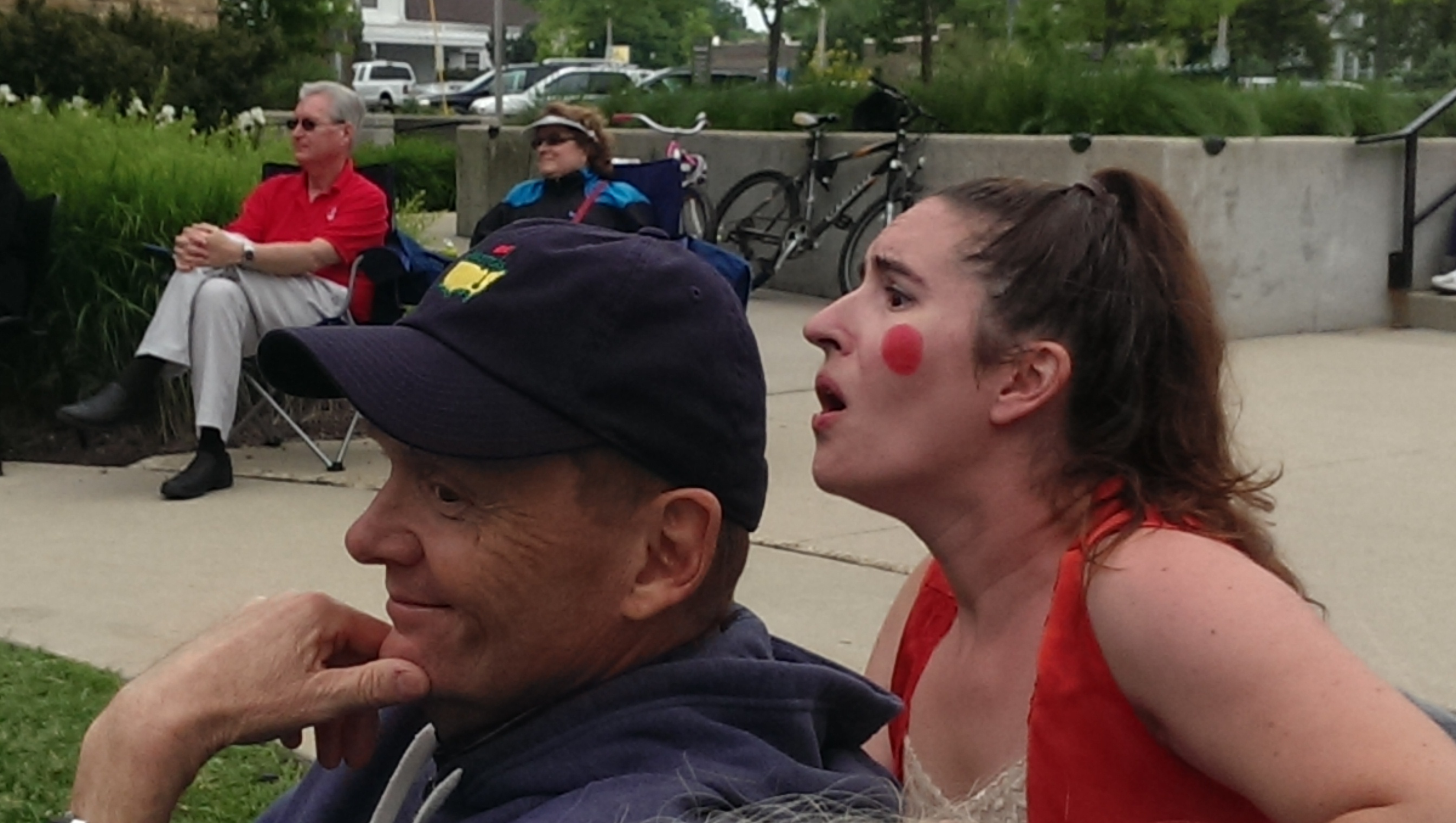 Adriana (Julia Stemper) hides behind an audience member/tree stump in a madcap moment in “Comedy of Errors.”

The madcap spontaneity of Stone Soup makes one think many of their physical gags are developed in improv sessions.

Still, conflicted emotions do transmit amid this show’s slapstick cavalcade. Among the sufferings endured is by bedeviled Antipholus, a bit of a lost soul despite his strong presence, and his wife Adriana, who grows quickly suspicious of her mate’s amorous intentions amid his travels. Company artistic director Julia Stemper plays out Adriana’s resentments and jealousies with a pulsing power that is by turns real, surreal and sensual. She shoots sparks in all directions that trigger anyone’s funny bone, because such physical comedy transmits wordlessly, even as it is accompanied by the world’s greatest dramatic poet. Stemper makes Adriana a sort of anti-heroine who manages to be lovable for being so human and insecure yet fearlessly “out there” about her feelings.

Ken Miller as Antipholous (as both twin bothers, actually) is tall, dark and handsome — the sort of husband a wife might be jealous of, regardless of the relative truth of her specific suspicions. He’s so utterly flummoxed that he’s deemed insane. Yet in fact, he is falling in love with his wife’s fetching sister Luciana (Jen Pommerenke). 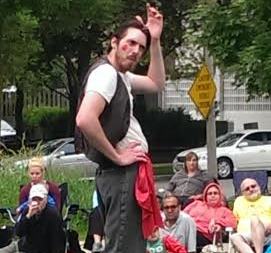 Antipholus is bewitched, bothered and bewildered in Stone Soup Shakespeare’s “Comedy of Errors.” Part of his dilemma is that he’s falling for his wife’s sister Luciana (below) 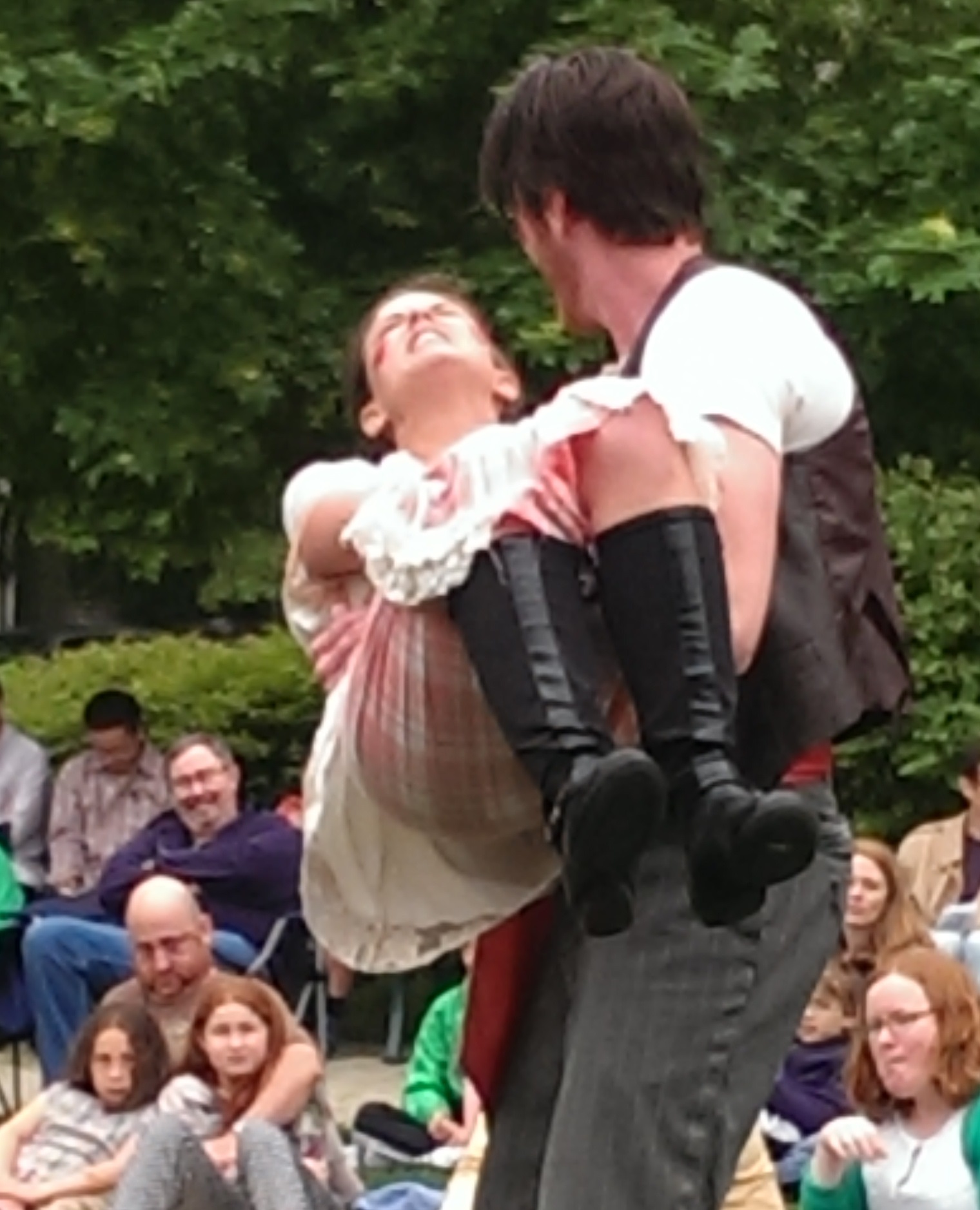 Among the show’s most remarkable performers is Nicole Goeden, who plays Dromio, the twin (and same-named) servants belonging to the twin bothers, Antipholus of Syracuse and Antipholus of Epheus. Goeden flops around the stage like a living, breathing rag doll in a myriad of zany, hilarious bodily and facial contortions, which suggest an Olympic sport is needed called Slapstick Gymnastics. And she funnels plenty of emotion through her zig-zagging expression.

And Muentener, a sturdily-built man, steals several scenes strutting about as a courtesan, done up deliciously in makeup, high heels, a tight black-and-white print shift and black feather boa. The actor slyly steals another scene as an arresting police officer in cutoff long underwear, twitching a giant fake handlebar mustache, back and forth, sort of like the fickle scales of justice in a world gone slightly mad, where common assumptions, identities, facts and social and political institutions seem topsy-turvy. Syracusians, such as Aegeon, are accused of fomenting seditious revolution against Greece. Does that sound familiar, by the way?

Thank the theater gods that this is not real life, only a “comedy of errors.” And hang onto such consolation for dear life.

The company is aptly named for “stone soup,” the name of an old folk story in which hungry strangers manipulate the local people of a town into sharing their food, by offering them soup made of stones. Yet this company, in a variation of the starving artists story, offers a goulash full of Shakespeare bottomless riches, in the hopes of wooing a few dollars into their donation bucket at the play’s end.

The non-profit organization gets funding for its annual spring-summer tours anyway they can and though this is its third visit to Shorewood, it needs funding to return here and other places.

They’re worthy of such support, for Comedy exemplified how — as well as any artistic group I can think of — Stone Soup attempts to joust with a windmill, with heroic integrity and ingenuity. If what they’re doing seems quixotic, the world needs more of this type of impossible dreaming. It shows how you can make even visions of Shakespeare come to life along a city street,  even for people who “don’t like Shakespeare,” or thought they didn’t.