Here’s a view of the front section of the new Bradley Family Gallery, with some of Sam Francis’s white compositional prints (see below), and a photo of the artist at work in his studio. Courtesy Milwaukee Art Museum

Here lies the pulsing heart of the new addition to the now-sprawling interiors of the Milwaukee Art Museum. The exhibit Sam Francis: Master Printmaker, running through March 20, 2016, is located atop the lakefront side of the addition. And considering that blue was the hue that meant the most to Francis – a genius colorist — the locale overlooking deep blue-green Lake Michigan is apt.

However, the new Bradley Family Gallery is rather far-flung from the main entrance. Thankfully a new east entrance, right on the lakefront, offers a more direct way to most of the new gallery spaces — and to the Francis show. From that entrance, proceed to the long-established elevators or staircase and go to Level 2. Turn left from the elevator (or north from the staircase), and then take the next right. This will lead you to the north-side entrance to the Sam Francis exhibit.

The superlative show cherry picks about 50 prints from the 2009 Sam Francis Foundation gift to MAM of more than 500 prints, now the world’s largest museum repository of the artist’s works on paper.

Entering, you encounter Francis, in a blow-up photograph, in his studio, making a long gesture across a large lithograph stone. This act symbolizes how far Francis journeyed beyond the conventional parameters of graphic art. His printmaking also set him apart among the first generation of abstract expressionists. Most of them simply, if often brilliantly, applied paint directly to a canvas, and that was it.

Francis, by contrast, first studied medicine before straying into an art career. His mastery of printmaking may reflect his more scientific and methodical side. And yet, he blew off the doors of printmaking media, liberating it in the process.

Right from his first prints in 1950, he’s using the graphic inks as fluent and dynamic means, whether hearty brush swatches or the drips, drops and drabs that expanded on his canvas paint vocabulary. Jackson Pollock pioneered this seemingly haphazard technique, yet no artist used it with greater lyrical flair, sensitivity and refinement than Francis. Also, he deeply understood and acknowledged the nature of this way of artistic being. In a variation on Miles Davis’ explanation of jazz, Francis didn’t call his radical rule-breaking of print etiquette “mistakes.” “He called them surprises,” said master etcher Jacob Samuel, who worked with Francis during part of his career.

Francis embraced those surprises, he danced with them, gave them purpose and life, evocative presence and often eye-gorging beauty. 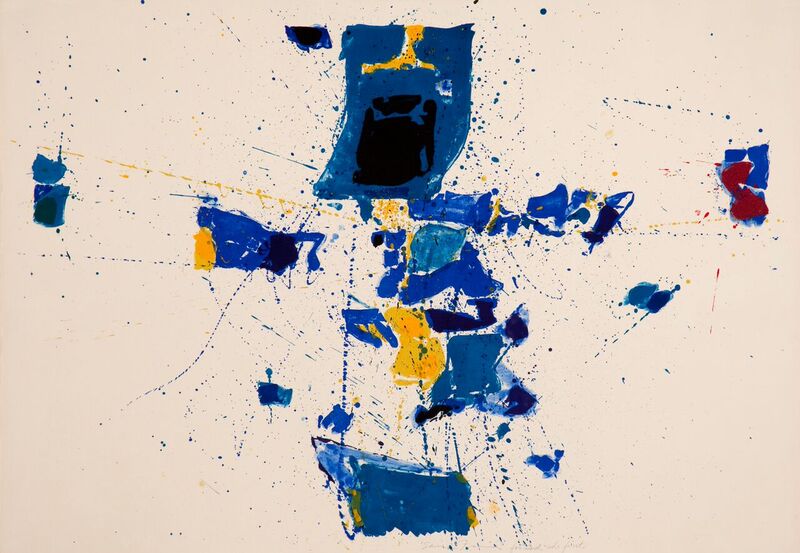 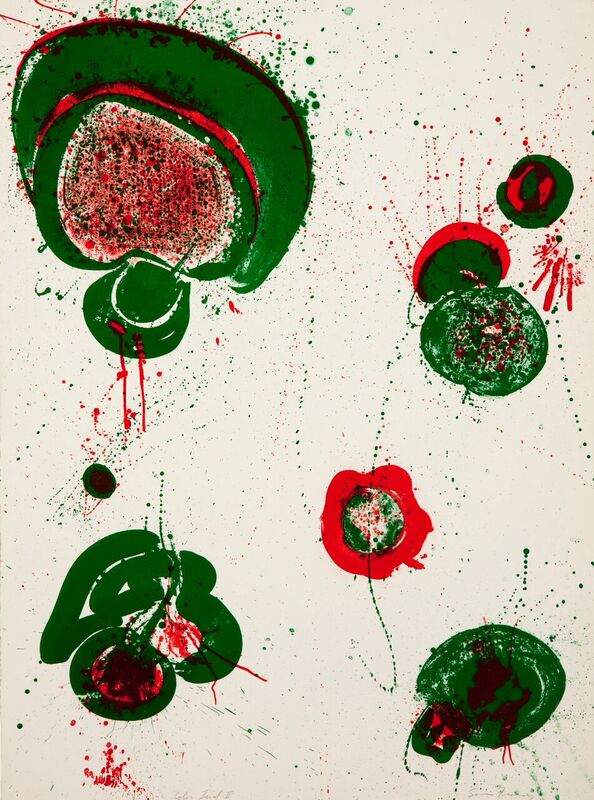 “First Stone” (1950, upper image) is one of the first lithographs that Sam Francis produced. “Chinese Planet” (above) is another early print. Both show the artist’s imaginative sense of form and virtuosic use of the famous drip painting technique pioneered by Jackson Pollock. Courtesy Milwaukee Art Museum

He soon found various motifs that lent breath to his color like the floating orb-like forms in “Chinese Planet.” In “Her Wet White Nothing” a delicious array of squibs and arabesques begin to envelop an empty middle open space, a sensual evocation with a balancing austerity that reveals and obscures, like a fogged, feverish dream.

But time after time, Francis dove deep into the white. The works here that use open, almost alabaster space as a central compositional focus typically work ink from the edges on inward. They contemplate the mystery of seeming colorlessness akin to “The Whiteness of the Whale,” the title of one of his renowned paintings, drawn from the same-named, mind-bending chapter in Melville’s Moby-Dick. 1 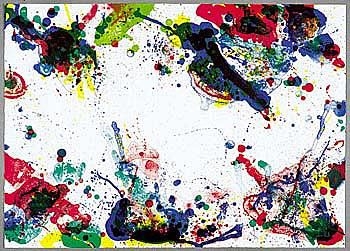 Francis also plumbed the heady challenges implicit in the abstract expressionist enterprise and Zen Buddhism. “White Deeps” (1972) delves into the deep space that critic Clement Greenberg famously celebrated; here densely latticed framing leads the eye to the a cathedral-like inner space, conveyed in a receding scale of spots. The framing color hums with profound tones of blue. “Blue is the color speculation,” Francis said. “It is full of shadow. There is darkness in it. The resident quality of blue is darkness.”

There’s a spiritual aspect to the speculation. He seemed on a quest to discover an alternate yet nearby universe within the realm of stone, ink, and his expansive imagination.

The show also includes one of his actual studio lithography stones. On the stone you see a few splashes of tusche, the oily inking liquid he used with jubilant and knowing freedom. Francis’ color-fueled spirit search leads to some heroic-sized prints that grow tonally deeper and deeper. “Dark Mountain Gates” and “Green Buddha” commingle extraordinary depths of gray, blue and black, and here he imposes a large grid on the image. These armatures “caught little essences of the infinity that go floating by,” Francis mused, with his Zen monk-like aura.

Francis’ color-fueled spirit search leads to some heroic-sized prints. The most beautiful of these, “Golden Rain (Piogga Do’re)” from 1988, employs a ravishing orange-gold grid superstructure and delightful small gestural variations, in each of its segments. 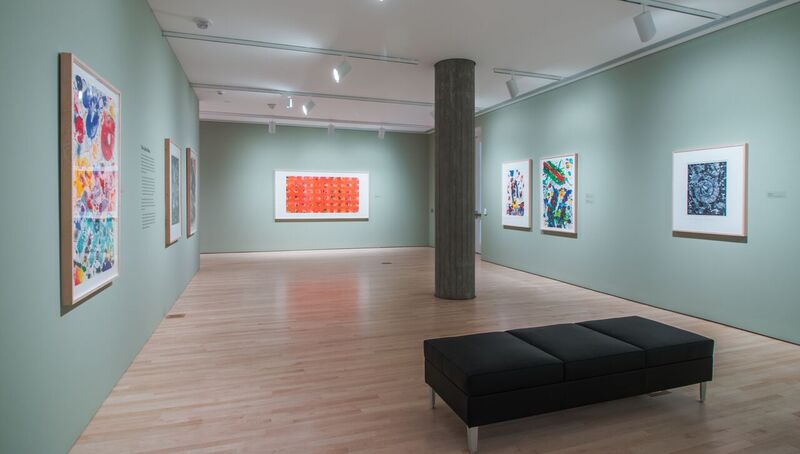 This view of the final room in the “Sam Francis: Master Printmaker” show includes, on the back wall, the large print “Golden Rain (Piogga Do’re)” Courtesy Milwaukee Art Museum

Having long absorbed his native California’s craggy textures, sunlight and surf, this artist explored form, and foremost color, as a life force and as a path to what Buddhists call The Middle Way. An imperfect Zen practitioner, his feel for The Way invariably strayed toward the sensual.

During the last year of his life, while suffering from prostate cancer he grew unable to paint with his right hand after a fall. Then, a final burst of energy he used his left hand to complete a dazzling series of about 150 small paintings before he died at 71 on Nov. 4 1994 in Santa Monica.

Now he lives again though his capacious prints, in the Milwaukee Art Museum. Come and meet them. They will greet you with a song in your eye, and perhaps your heart. 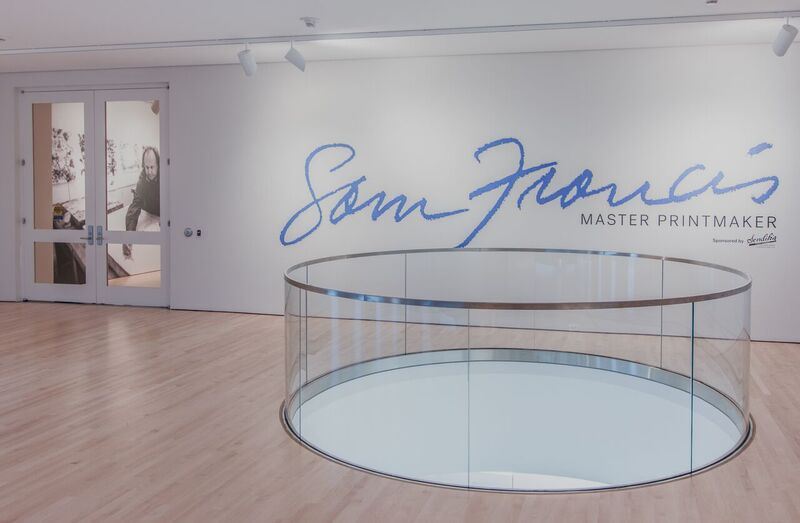 1 In this excerpt from the film The Painter Sam Francis, several commentators address the implications and challenges of this artist’s use of white space as a central focus and perhaps subject of some of his strongest work. http://blogs.getty.edu/pacificstandardtime/explore-the-era/archives/v46/

This review was originally published in OnMilwaukee.com http://onmilwaukee.com/ent/articles/samfrancismam.html