The Wisconsin recall election was really “all about courage.” – Rep. Paul Ryan. 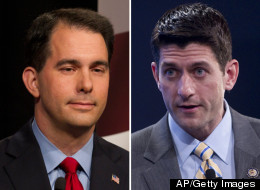 It’s partly because they’ve never really grown up. Life is still a game of Monopoly, for them. Both strategize by masterfully manipulating numbers — dollars and statistics — as if abstract numbers are all that count in the world any more. What strikes me most about Paul Ryan is that this self-described geek (who, gee whiz, loves his peanut butter and honey sandwiches) is a pure numbers man, a weird sort of breathing automaton.

Yes, we need to do something about the deficit, but virtually every effective administration has functioned with a deficit. And this most extreme shortfall is courtesy, of course, of the last Republican administration, which went hog-wild with defense spending, and then dawdled while New Orleans drowned.

Of course, unlike even many mainstream Republicans today, hawk-boy Ryan still thinks if we keep throwing incalculable numbers of young Americans into harms way on the other side of the world, we can solve all the problems of ancient societies and cultures which we understand poorly, and have no right to to attack, unless they have attacked us. It’s a demonstrably outmoded mega-military mentality.

Now comes Ryan, posturing as if the deficit is all President Obama’s fault, and threatening to gut or eliminate Medicare, Social Security, food stamps and virtually all the social safety nets of our civil society.

The problem is, as a budget geek legislator, all he seems to know and understand is numbers. People are merely big, cumbersome numbers to him — to be jiggered around and preferably away, because they complicate his brilliant computations with their unpredictable (and predictable) human needs to survive. He is the essence of the contemporary technocrat geek, divorced from human reality.

Well, surprise, Rep. Ryan, any way you slice or dice these numbers, most of them represent vital support for living human beings — who work (or try to), procreate (like pro-life Republicans insist they should), bleed suddenly or suffer slowly, grow old, or die before their time.

So Ryan keeps smiling and arguing about numbers, as if his god, Math-is Maximus, will solve all our problems.

Oh, we now know he’s a workout fanatic because his father and grandfather both died before age 55 from heart attacks.

But what if his heart genetically fails him at age 52 — disabling him? Well, he can probably afford his own private health care. But most other 52-year-olds in the same situation – or a myriad of disastrous other ones — who end up losing their jobs couldn’t afford care under his plan, because they will have no disability safety net.

Just take a voucher, he’d say, and good luck. But you should’ve worked out even harder!

Survival of the Fittest, the Luckiest and the Richest, who pay nothing extra to cut the deficit — that’s Ryan’s plan.

I can imagine what he’d do if his own grandmother’s wheelchair failed and she rolled screaming down a hill.

How convenient. He’d scratch his head for a moment, and continue tabulating and subtracting. And now, smiling for the cameras.

That takes real “courage.” I can think of other words for it.

One thought on “Paul Ryan: The Story of the Peanut Butter-munching Automaton and his Granny”