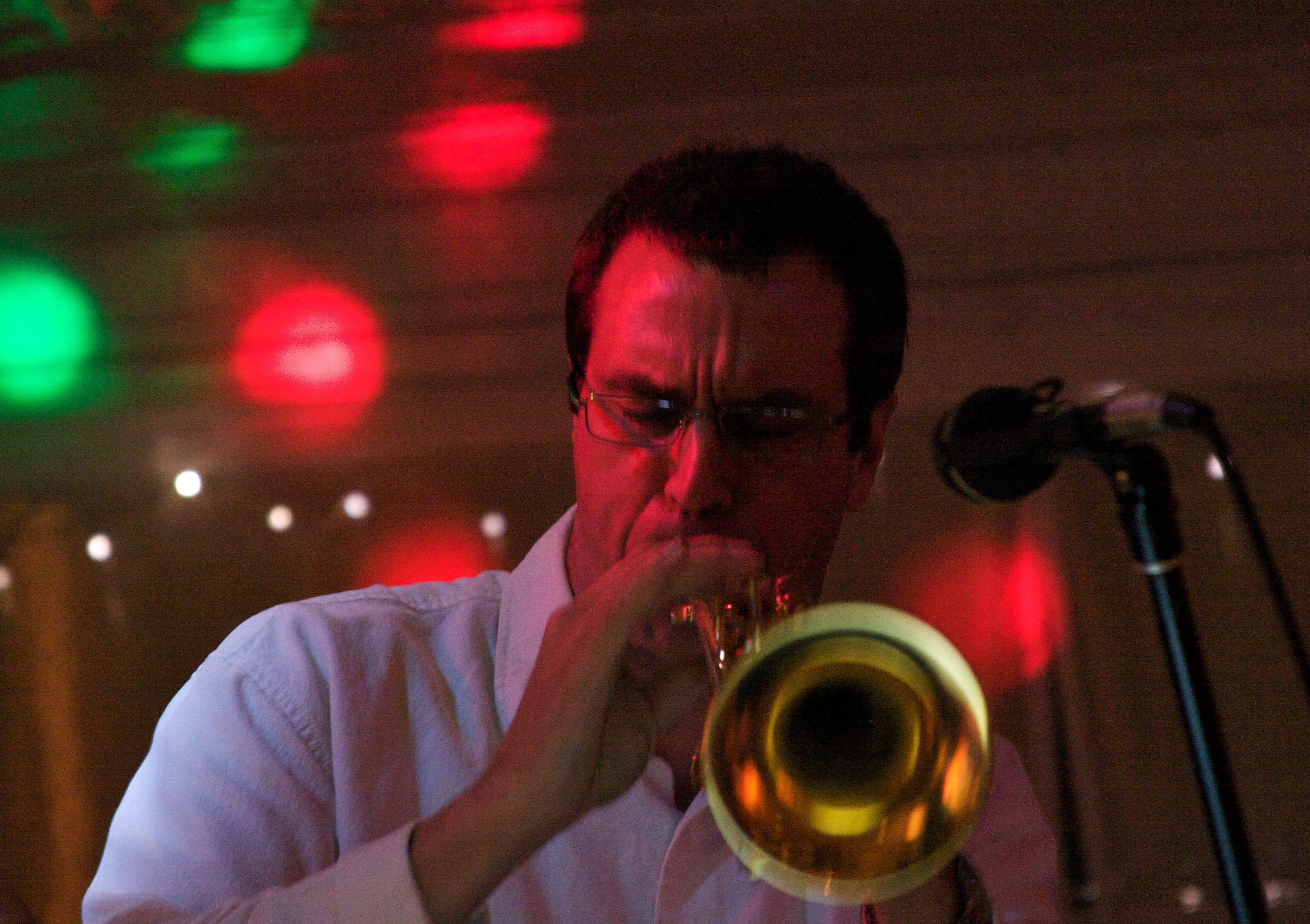 You know the cliché about art imitating life. What’s more significant is how music can sometimes embody life and life transform music. That happened to Cooper in ways he never dreamed of. In fact, he’s turned medical horror — a nightmare that threatened his life — into deathless music. The story speaks as much of courage as creativity, not to mention the endurance of pain, the face of mortality. Cooper is 51 years old.

We’re talking a trumpeter given a diagnosis of throat cancer in May 2014, shortly before the recent jazz recording The Journey was planned. It’s a bit like a boxer going down to the mat and the ref’s counting you down. Imagine the tragic movie Million Dollar Baby. The analogy is not much of a stretch.

Not only a cancer diagnosis but a fractured jaw. And it sort of gets grisly.

“I had to have all four wisdom teeth taken out,” Cooper recounts. “The cancer was under the skin so they were afraid it could potentially kill those teeth. To keep them clean would be just a mess, so they wanted to get rid of (the teeth) pre-emptively.

“So they knocked me out and actually fractured my jaw accidentally, removing the teeth. I started the radiation daily and chemo for six-weeks. They said in the last three weeks it won’t be good and after that it’s the worst, how treatment progresses.

“By the recording, I was in the third week of treatment. So my wife Kelly drove me back and forth to the studio, I couldn’t drive. The chemo and radiation just knocks you out, so I was loopy.”

Cooper, who lives in Black Earth and is professor of music and chairman of the music department at the University Wisconsin-Platteville, took a planned road trip to an international trumpet convention in June. 1

“Nothing had started, but my mind was reeling with the news of the cancer,” he recounts, and admits little recollection of the conference. “But the road trip now provided the context. I had time to think and listen to many of my favorite recordings.”

“Almost all the tunes are standards and are things I’d always wanted to do,” Cooper continued. “I thought, I have a bucket list of things to do. So I could write new heads, so they’re mine. Then I saw road signs and thought oh, that might be an interesting name for a tune.”

As the concept arose and came together the titles list congealed with an undercurrent of threat or danger: “Merge Left,” “Stop,” “Detour Ahead,” “Speed Zone,” “Rough Road Ahead,” “Slippery When Wet,” etc.

They serve as material for meaty musical interpretation, and as an extended metaphor for Cooper facing the threat of cancer and treatments, the violence to his person and psyche.

“There was a lot of fear and concern in that whole process,” he admits. Considering that, what’s amazing is how damn good The Journey is. 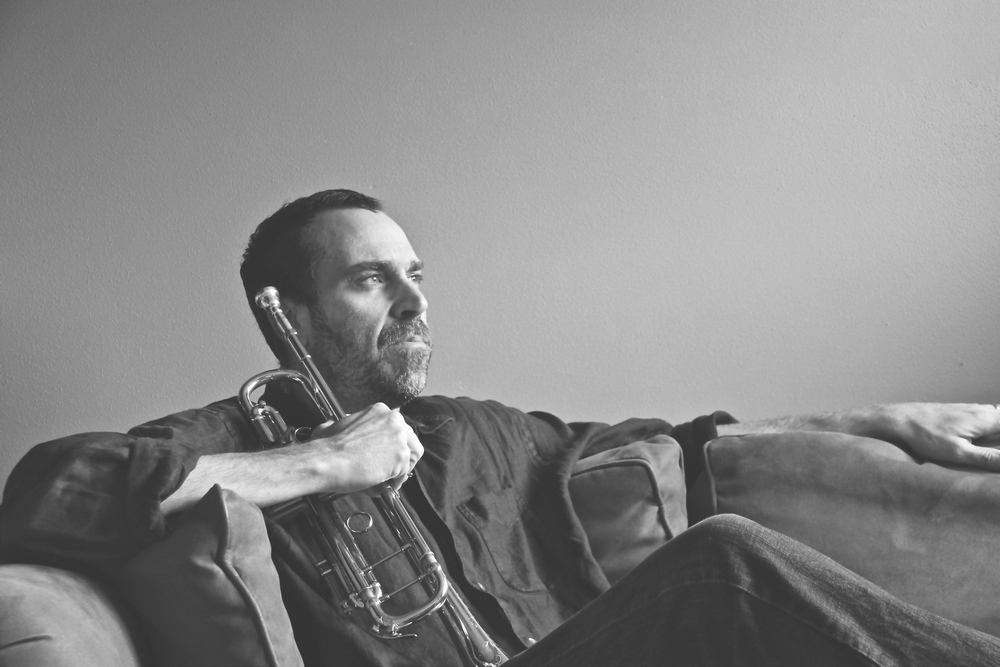 The cover photo of Dave Cooper for “The Journey.” Courtesy union.wisc.edu

And Cooper feels his playing was compromised by the illness. He had anticipated this quandary. So in the previous months he busted his tail getting himself into “the best shape of his life” for playing. If one compares The Journey to his recordings of his transcribed Bach unaccompanied cello suites, one may perceive less technical assurance or — in to his previous jazz recordings — bravura. Throat cancer wreaks havoc on a horn player’s embouchure, he said.

“If you get out of shape you need to continually rebuild the mouth muscles by exercising. But the pressure on the lower jaw when I played, that was painful. I didn’t know why at the time. It wasn’t diagnosed as a fracture until months later. I thought I had an infection in December, which really scared me. My face was so swollen they had to wait until it died down to search for the cancerous spot.”

Picture, say, a lopsided watermelon wilting in the heat and sliced open just enough to stick a trumpet in, like a knife.  And Dave’s a handsome fella.

His wife, the talented jazz singer Kelly DeHaven, deserved none of this. “Kelly went through every bit of this with me. Now she’s kind of exhausted and beat up. She needs the time to be nurtured. She was a rock through all of this. They did this carpet bombing: ‘Here are your drugs, hope they knock down the swelling.’ That’s when we all hit rock bottom. It did turn out to be an infection caused by tooth extraction which never healed well. “

Nevertheless, the opportunity had arisen, almost like a long-unrequited musical love affair too sweet for disease to deny, an Affair to Remember. You may hear a sense of mature wonder, a life faced and lived, and perhaps inevitable angst, which can take you a long way as a listener.

The strong material, mostly based on changes of classic tunes, sounds time-tested. The music resonates in my memory as a listener.

“It helped to provide a good structure and familiarity so the rest of the guys could come into the pieces much faster and be comfortable,” Cooper says unassumingly. He considers himself lucky in another way

“This band was basically my dream team, of the people I’ve played with in the last ten years.” That would be Madison pianist Johannes Wallman, Appleton bassist Mark Urness and Chicago drummer Ernie Adams.

But here’s where Cooper’s journey really does detour, through a virtual Death Valley. And the guy riding stagecoach was that nasty outlaw named Side Effects. And there’s no end in sight for that road, not yet.

“I’m still dealing with the radiation in my throat,” Cooper explains. “My whole throat and jaw area all contain salivary glands and are affected. Well, (the doctors) fried those and now I have constant dry mouth. The embouchure is really compromised without saliva. So I have to think in shorter phrases and always have a bottle of water by my side. That began during the session. It felt like the face wasn’t mine.”

Sometimes necessity is the mother of invention, or the power of creation.

“Perhaps I didn’t have all my tools available to me, I had to be judicious about what I say, and how I say it, and be more succinct,” he says. “Now that I feel my playing is back to normal I think I’ve learned from that. I’m trying to say more with less.”

Cooper’s resourceful courage is almost palpable on The Journey. And the band swings, swerves and hums through it like a finely-tuned Maserati, masterfully hugging the curves of the tunes. Plus, you have Cooper taking “Merge Left” based on “Green Dolphin Street.” The opening salvo of C to Cm7 to D7 to D flat to C is among the standard repertoire’s most satisfying sequences of naturally transporting changes. Other tunes are based on Coltrane’s “Giant Steps,” Terence Blanchard’s “Transform,” Wes Montgomery’s “Road Song,” among others. “In some ways it’s like my maiden voyage.”

“Because of my dad, I wasn’t in just a sea of people,” Cooper recollects. “I was at the top of the class. So because of my dad I began practicing to stay ahead. That kick-started me.”
Here’s to David Cooper taking his sweet time with his bucket list, for a long, journey down the road before stardust befalls him for the last time.

1. Cooper has music degrees from three schools: a B.M. from Lawrence University, a M.M from Akron University and a D.M.A. from UW-Madison.

This article was commissioned by the Madison Jazz Consortium and originally published in Jazz in Madison at http://www.jazzinmadison.org/the-journey-a-deathly-odyssey-teaches-david-cooper-about-music-and-life/