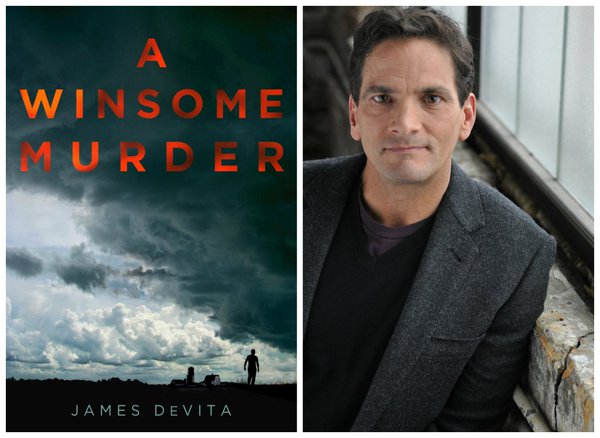 James DeVita knows both sides of homicide, having played both Hamlet and, years later, Claudius, who killed the prince’s father and stole his queen. DeVita now traffics through that insight as a writer. DeVita’s Italian-Irish passion and intelligence have burned through numerous Shakespeare and modern roles, from murderous to lady-killer, primarily with American Players Theatre. 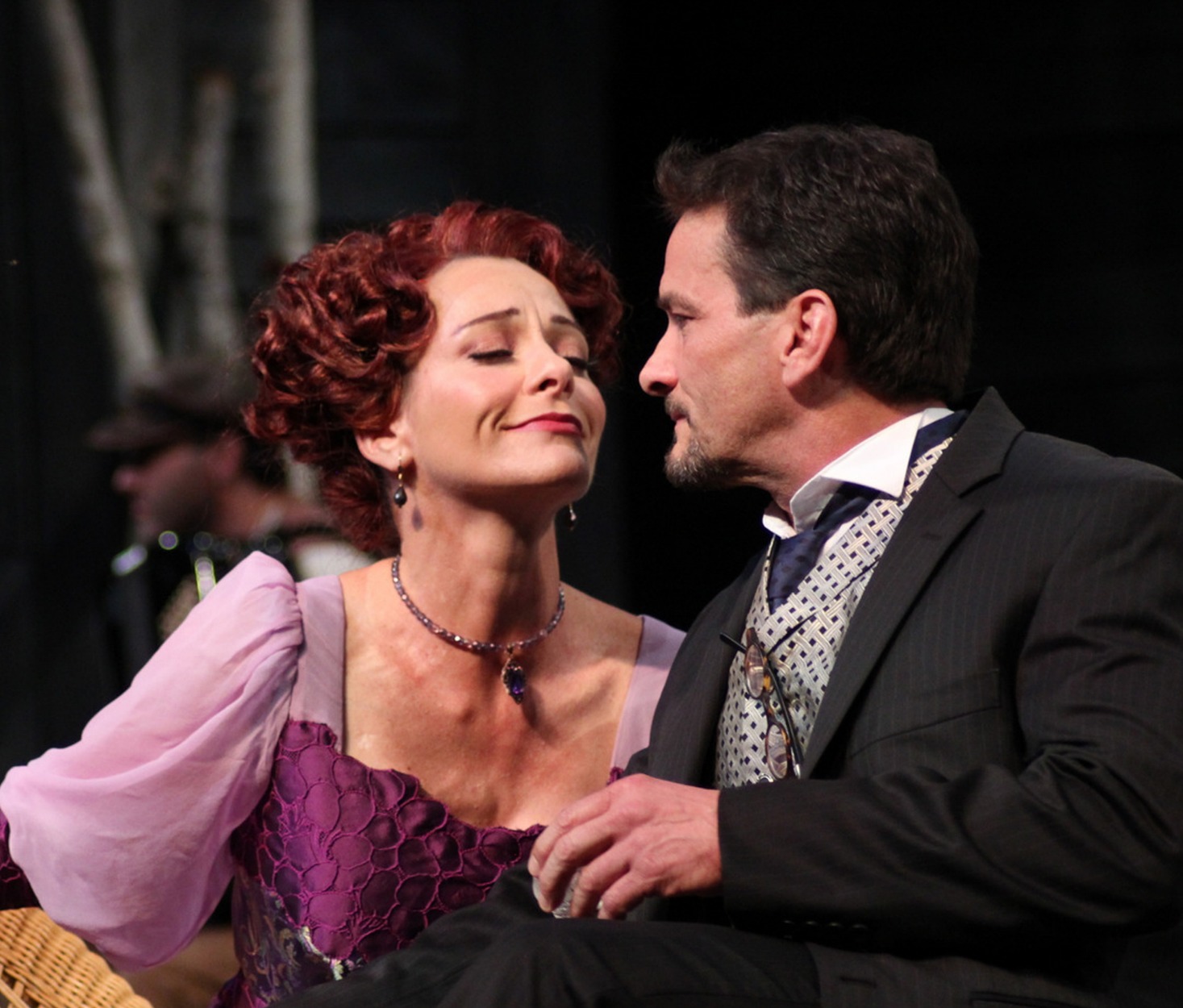 Jim DeVita as Trigorin and Tracy Michelle Arnold as Irina in Chekov’s “The Seagull” at American Players Theatre. Courtesy milwaukeemag.com

This acclaimed and popular stage actor has since adapted — from Shakespeare and Sir Ian McKellan — a five-year-touring one-man show In Acting Shakespeare, which traversed the U.S. and Ireland. No less than author (Duke: A Life of Duke Ellington), playwright and Wall Street Journal critic Terry Teachout has written: “America has no finer classical actor than Jim DeVita, a 21-year veteran of Wisconsin’s American Players Theatre. In recent seasons he’s starred there in Antony and Cleopatra, The Critic, Long Day’s Journey Into Night, Macbeth and The Seagull, and the disciplined intensity of his performances in those widely varied roles has never failed to impress.” 1 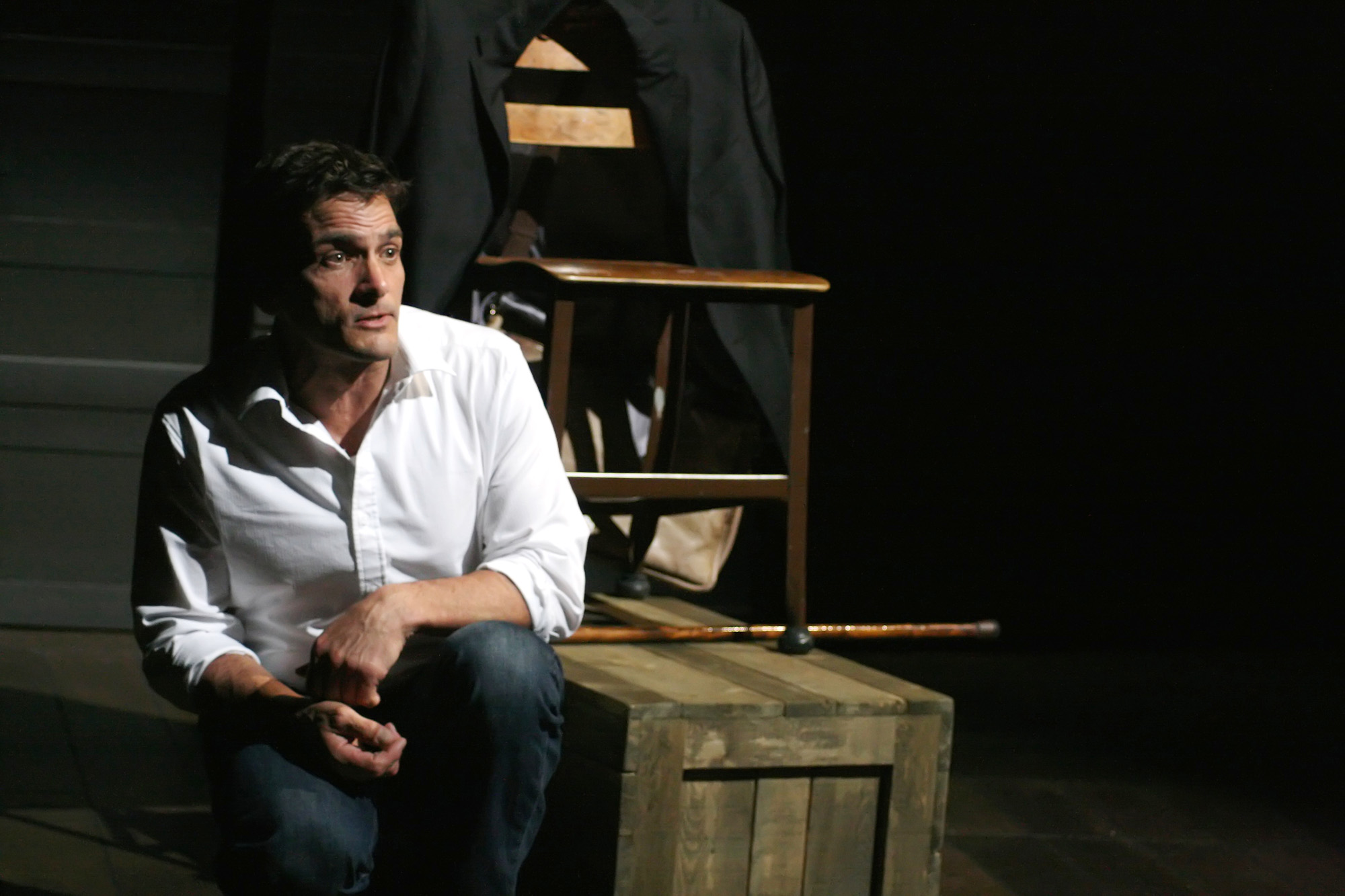 Perhaps a working-class background put a chip on his shoulder as big as Richard III’s ominous hump. He’s polymathed into a playwright, author, award-winning children’s book author – and emergency medical technician. Now comes his first adult literary mayhem-mystery, A Winsome Murder. DeVita hoists a “cheap crime paperback novel” formula into a Shakespeare-haunted blood-adorned whodunit as effortlessly as his tough Chicago gumshoe might clean-jerk a cigarette to his curled lip.

Where and how did the idea for a literary murder-mystery come to you?

I didn’t set out to do that. I read that F. Scott Fitzgerald wrote to a blocked writer. Fitzgerald said, “Throw a body in there. It always livens things up.” So I just did that, I started with a body in a field and had no idea what was going to happen. The story started to grow around that. This line from Shakespeare’s Titus Andronicus came to me — when the detective looked at the body – because something was wrong with the body, dismemberment. So I thought, that’s weird. But the lines kept coming to me. I wondered, OK, could Shakespeare be helping this guy with his crimes, with this little quirk? I started to like it. It got fun — I’ve got a lot of information in my brain to do that. I’m not quitting my day job. I want to enjoy what I’m doing.

Who are your primary influences among murder-mystery/ police procedurals, and why?

Funny thing is, I wasn’t a mystery reader. Right now, I have Forensics for Dummies on my desk. So when I was writing it, I had the character Jillian McClay, who wants to write a mystery, doing that research. Most of my research was literal police procedurals. I wanted it to play out like most cheap crime paperback novels, and sneak this literature in. I kinda based Det. Mangan on some of my Irish uncles, some of the funniest men I know — dry, witty and quick. My two uncles were detectives.

The first victim is involved with setting up a meth lab. Did Breaking Bad inspire you at all?

No. Behind that was my work as an emergency medical technician, which I’ve done as a volunteer in Spring Green for 15 years. Meth is a problem here in the country. We take people into the hospital for it. We did training with the police because you get called to these things and it’s very dangerous. When you cook meth, it smells like sh-t so they do it out in these fields and woods.

Det. Mangan breaks a stereotype of narrow-minded cops. How did you arrive at a Shakespeare and Melville-haunted detective?

I find the tough-guy cop’s humor funny, the way he interrogates. I wanted him to be witty, kinda based on some of my Irish uncles, some of the funniest men I know, so dry, witty and quick. My two uncles were detectives. I kind of love that paradox street tough guy from Chicago who loves Shakespeare and Melville.

Literary critic Harold Bloom has claimed grandly that Shakespeare “invented the human.” In the sense that we never knew what a human being was, or that it had been articulated well until Shakespeare started creating all these amazing characters and settings and exposed the human condition. Is there something to that?

Having been an immersive Homer the last three years I’d say Homer did a pretty damn good job (regarding humanity). Shakespeare was a genius. They come along rarely like Mozart or Beethoven. It’s a quantum leap in something, but “invented”? I think he described the human condition better than most anyone. Like in my (In Acting Shakespeare) I say I don’t think Shakespeare felt or thought any differently than anyone else because I like to keep him human. But he did describe it better than anybody and you hear that as an audience or as a reader. You say, oh my God, that’s me, or I know people like that. Or like Beethoven, just the sound of it makes us weep.

In A Winsome Murder, you delve into psychology with great deftness and conciseness. Have you learned from Shakespeare?

Yes, Shakespeare was writing psychology before there was even a word for it. Now we called motives or whatever Freud has given us as motives.

How does your experience as a Shakespearean actor play into your writing of this novel?

Mostly in images from being around great theater for so long. But I have a lot of fun with dialogue. Most of my stuff I read out loud, different voices in my room. I sound a little crazy up here. I think my dialogue has been strong. I’m improving on my narrative and prose.

The shifting points of view in A Winsome Murder is a classic suspense device. One book I remember it from very vividly is William Goldman’s Marathon Man.  What do you like about it?

Why did Melville come into play as a second source? Does drawing from Melville helps to Americanize the literary experience somewhat and expand some of its implications, especially for the obsessive mentality, or “worse than mad, Melvillian mad”?

Partly because he and Shakespeare are my two favorite authors, and as I started to let the literature in, the Shakespeare stuff is more immediate to me. But it’s odd how they kind of live for me because I feel Melville’s profound, beautiful, unfathomable questions, as he called it, the “deep diving.” They’re kind of an answerable those things. And his talking to Hawthorne about huge stuff: God, Why are we here? It’s wonderful but doesn’t give me any answers because there are no answers. So it’s harder to get my hands around it, so I have some fun when the detective starts to think of Melville, he drives him crazy.

But I love Melville, and the sea, and I’d like to do a one-man show on him. I’m waiting for the conceit to come.

A parakeet plays a surprising role, though you don’t push credibility with a talking one that might solve the case. Do you have a thing for them?

I’ve nothing for parakeets. it’s a bird that a female character (a murdered prostitute) has in her apartment. So it’s kind of a classic tough guy who doesn’t like birds or animals but  he’s not gonna let the damn thing die. He has a good heart and I’m gonna bring her back in the next book, Phoebe the parakeet and Mangan.

Titus Adronicus seems to be the most-quoted play. Is that because of its revenge thematics or is it also an underappreciated play?

The reason it came up the most was because of the condition of the first body when it was found. In Titus, a girl is raped and both her hands are found cut off.

This interview was originally published in The Shepherd Express in shorter form.