The Gypsy Lumberjacks showed their impulse to wander by venturing into territory that so far remains a wasteland for them — Milwaukee, specifically, a gig at Catch 22, a sports bar where virtually all downtown dwellers were outdoors, savoring some of the last few beautiful summer evenings.

So, to paraphrase T.S. Eliot, September can be a pretty damn cruel month, too.  Yet these woodsy gypsies  “bred lilacs out of the dead land”  — performing a set of fresh inspiration and forward-thrusting bloom, to their own high professional standards on the premise that people might show up.

Indeed, there was something faintly heroic about it, tinged with pathos, the lonely lumberjack felling a mighty tree that no one hears in the forest.

So listen up – if they’re in your town — or hear this: The touring Minneapolis-based band’s vibrantly colorful and emotionally nuanced new CD Pulling Upon the Strap demonstrates intriguing instrumentation, which showcases their stylistic originality — including an accordionist and a violinist, and percussionist Ben Karon who specializes in the cajon. Originated in Peru but used often in Africa, the six-sided box-like instrument is also the percussionist’s seat as barefoot Karon slaps and paradiddles it barehanded between his knees — with staccato power and nearly a master tabla-player’s dexterity. 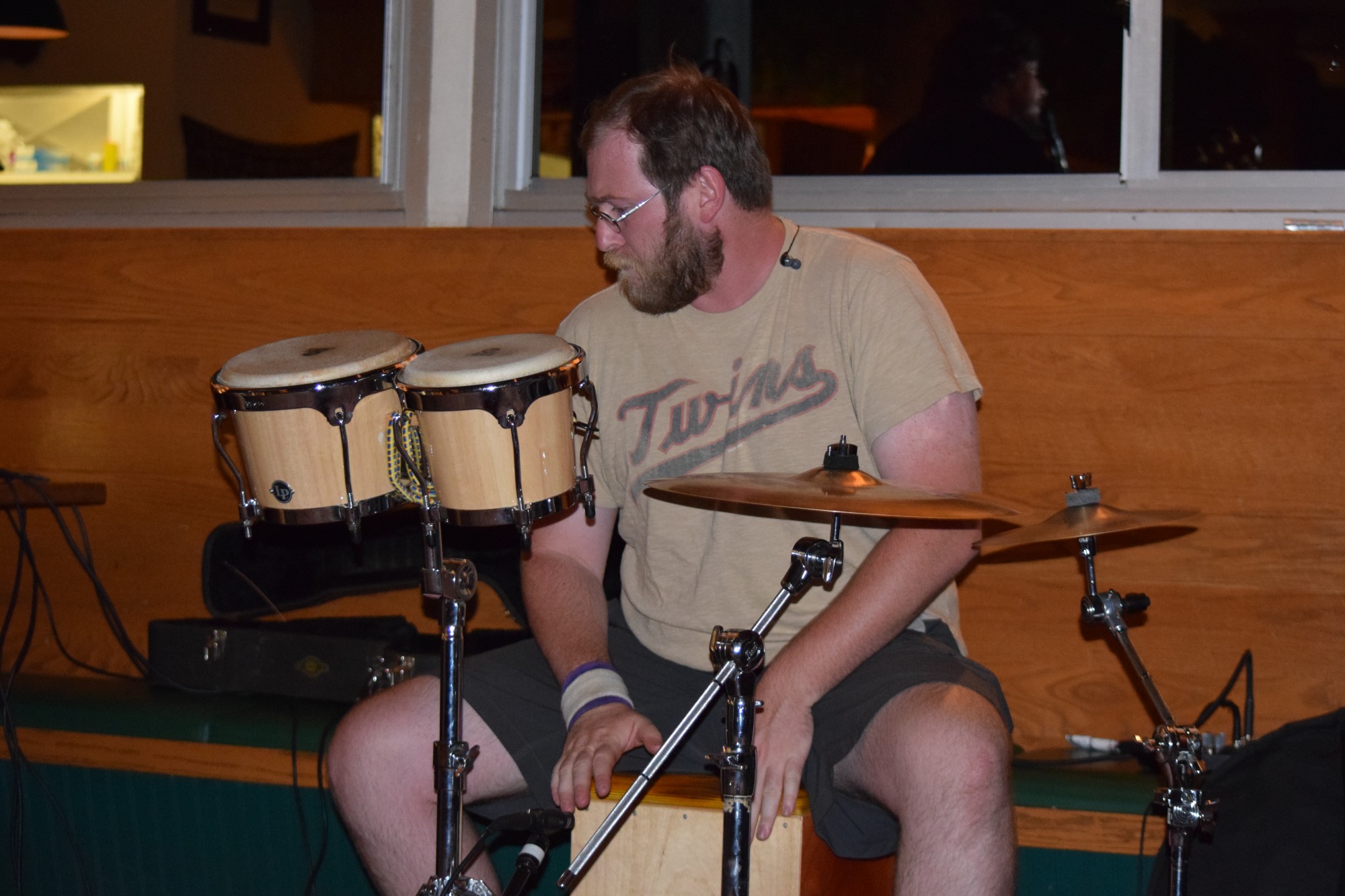 Lumberjack percussionist Ben Karon specializes in the Peruvian cajon, which he sits on and beats like a tabla player. Photo by Kris Verdin. 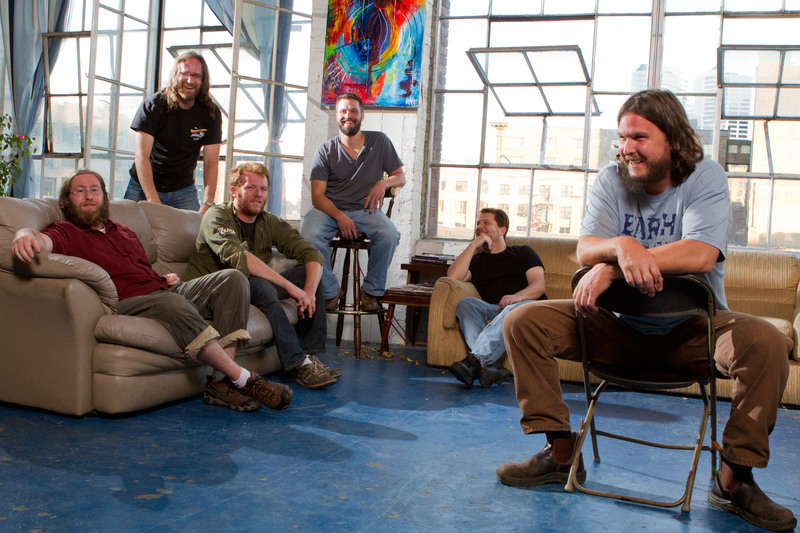 But at this gig, with the only the band’s core trio —singer, songwriter and Flamenco-inflected guitarist Leif Magnuson, bass guitarist Pete Verdin* and Karon — performed a long set of original music climaxed with a songful Bela Fleck cover,  demonstrating their commitment to a high standard of musicality. In fact, the musical synergy was extraordinary considering they’re just starting a tour and hadn’t played for three weeks before their previous gig in Madison, according to Verdin.

So I can only begin to imagine them live under ideal circumstances, with a responsive audience, which is evident on their first album Live at the Sound Gallery. 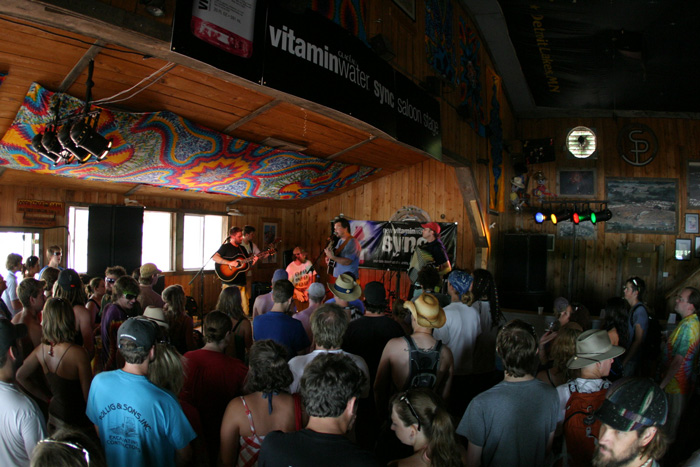 The Gypsy Lumberjacks with a more hospitable crowd. Courtesy gypsylumberjacks.com

The latest CD of all originals, Pulling Upon the Strap, begins with “Chicha Fria,” a skipping, infectious guitar and percussion rhythmic pattern, overlaid with spoken voices like a dial radio between two stations. But the voices debate the qualities and power of knowledge, also suggesting the multi-layered experience of today’s social media-obsessed life.

“Who am I and why should I care? Who are you you, why do we share?” Magnuson sings to the main melody which beguiles oddly, as do the refrain’s lyrics: “Don’t follow me ! I know just where I stand, don’t follow me! No matter where I stand…follow them, you’re running out of time…” Despite the singer’s disclaimer, the song conveys a pied piper-like magnetism and a certain urgency, an apt beginning. Magnuson possesses an appealing and resonant voice that can bellow clarion strong, yet in this album he reigns in the slightly elephantine tendencies that sometimes marred his vocals on the first album. Now Magnuson does more just to his song’s nuance and meaning, enriching expression rather than trampling it.

“Ploughman’s Blues” is no conventional blues but its minor-key refrain phrase virtually glides, eliciting a work song-like tension-and-release, riding Cliff Smyrl’s organ-like accordion —  the sort of motion that historically sustained labor, from chattel slaves to ploughmen or lumberjacks. Vocal harmonies call: “The sweat upon your brow,brings the silver that you need.” But life’s never simple or easy: “The solace that you sought is fraught now with disease.. .Then you cry out loud. No one seems to hear.”

This is hardly just a band backing up a strong singer-songwriter. The ensuing instrumental “Blaenau Ffestiniog” shows the Lumberjacks capable of substantial improvisation dynamics and invention. Here Verdin’s supple bass drives and lifts from underneath the band’s blend of zydeco, traditional and progressive bluegrass. 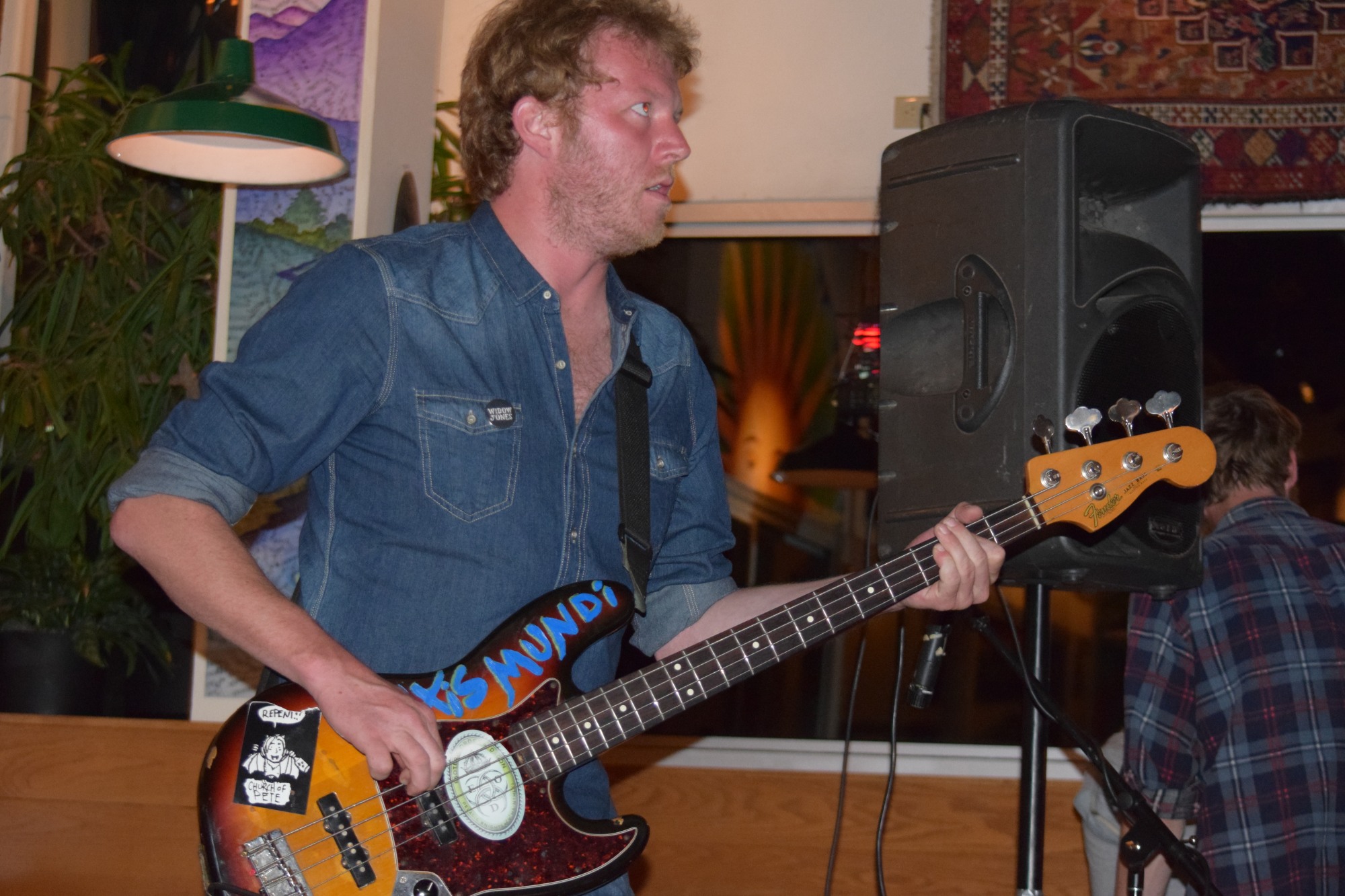 The two mid-album instrumentals cast an expansive aura that drives the gypsy spirit, an imaginative and daring programming strategy that works superbly.

Then the limpid melody of “Miner’s Dross”  helps contemplate humanity’s proverbial fall from grace. “When you gather your thoughts all you have are the miner’s dross.” To wit, the cruel life gut-punch often accompanying flawed behavior can also drain the brain and spirit — due wisdom for relatively young performers. And yet, in the ensuing “Elephants Underwear” Magnuson ponders: “His time, his fate, is it too late to do something great?”

“Riversong” declares “We’ll keep movin’ on, movin’ on like water.” And though the lyric leads to the ocean floor, the group radiates forward motion and rising inevitability. These gypsies are coming, as is their time.

The Carribbean-cum-African Hi-Life lilt of the closing “What You Wanted Here” may seem to push the stylistic envelope to bursting, yet they pull it off. The band’s nearly seamless vernacular cross-stitching encompasses a global awareness that extends far beyond the ostensible Americana they were first associated with.

There’s not a weak number on the record, a rare accomplishment, and a measure of the balance of songcraft and musicianship. And in true lumberjack style, they’re pulling the strap tight to haul their loads of stylistic cuttings. They seem ready for the long haul.

The CD Pulling Upon the Strap is available athttp://www.gypsylumberjacks.com/

*Full disclosure: Peter Verdin is the writer’s nephew by a previous marriage.