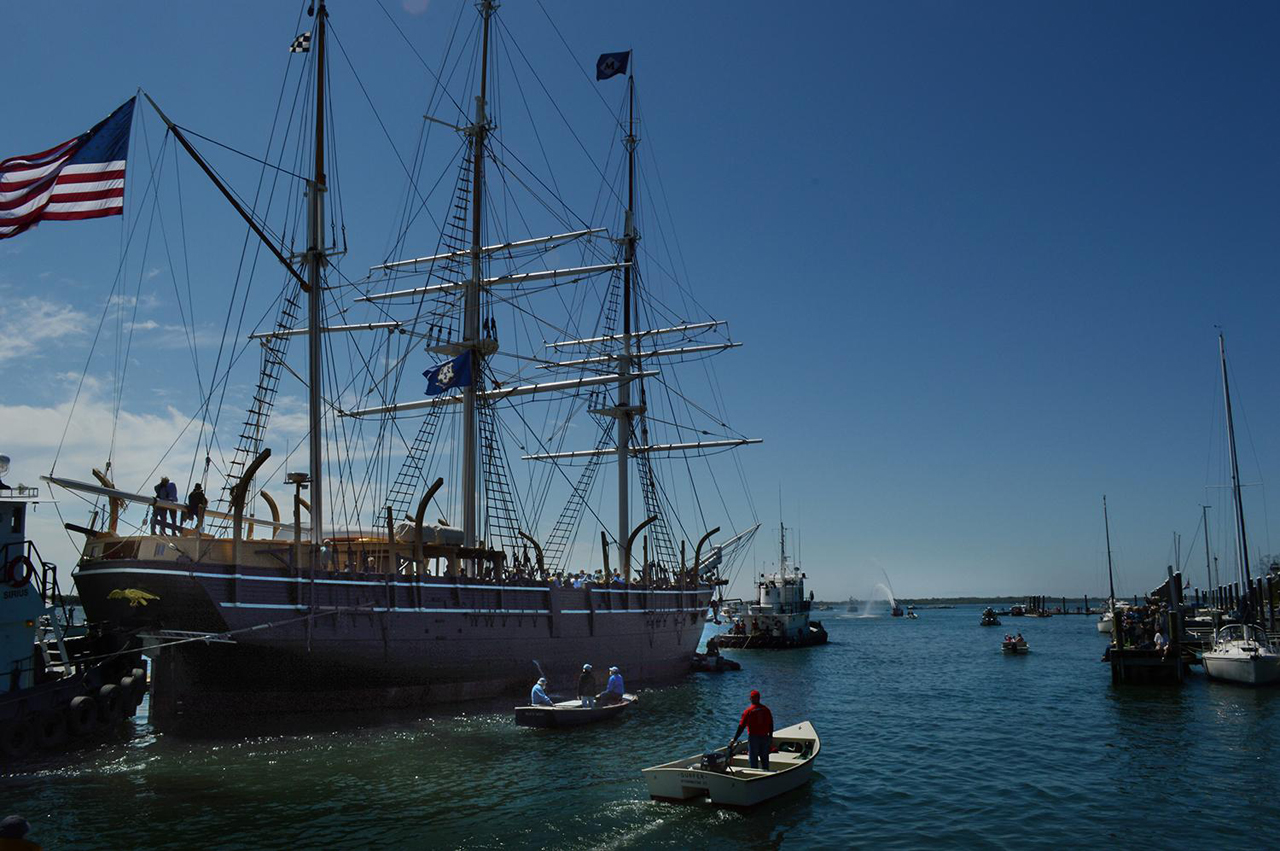 A tugboat pulls the Charles W. Morgan out to sea for a rare historical informational festival tour about whaling along the eastern seaboard.

We stepped aboard the Charles W. Morgan, and its safely moored equilibrium belied the mighty battles with oceanic waves and sperm whales that it endured in nearly 40 voyages during the mid-1800s, part of the industry that slaughtered giant sea mammals and provided whale-tapped lamplight oil for the world, including Melville’s desk, as he wrote Moby-Dick in 1850-51.

My first instinct when onboard was to look up, to the masthead lookout spot where sailors men took turns peering across the horizon for telltale signs:  a fluked tail, or a misty spout of water or a black hump or, in the case of Ahab’s ship The Pequod, a white hump, “one grand hooded phantom, like a snow hill in the air,” as Melville describes Moby Dick. 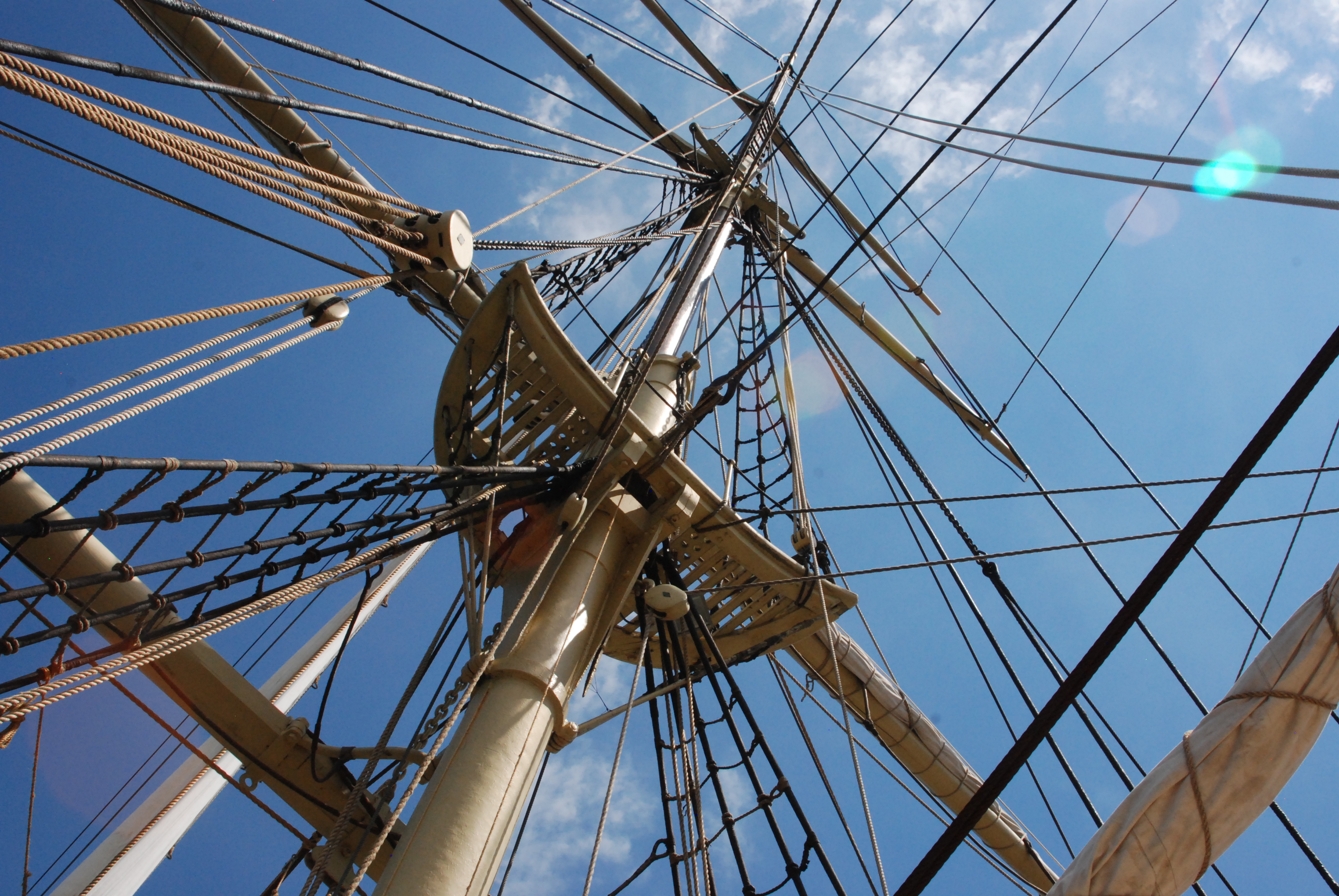 The masthead is the lookout perch on The Morgan where sailors searched the sea for whales. Photo by Katrin Talbot

The Morgan is the only extant ship from the great whaling era, so I was there at its dock in Mystic, Connecticut, doing research for my novel on Herman Melville, along with my collaborator, photographer Katrin Talbot, and her daughter Ariana Karp (also the daughter of Parry Karp, cellist of the Pro Arte Quartet).

As a former mountain climber, my longtime attraction to heights compelled me to gaze skyward, whereas Katrin quickly began exploring the deck and the guts of the ship with her camera, as well as peering straight down over the ship’s side into the sea, not unlike Ahab does in a famous scene shortly before the great three-day chase of Moby Dick, when he gazes into the water at his profoundly conflicted reflection and also sees that of his enigmatic, covert and faintly satanic hired harpoonist, Fedallah.

What Katrin discovered in the water, however, was more ghostly than satanic, a jellyfish pulsing by, in its elegantly spasmodic manner. She caught a couple of shots of this spectral miracle of the sea. 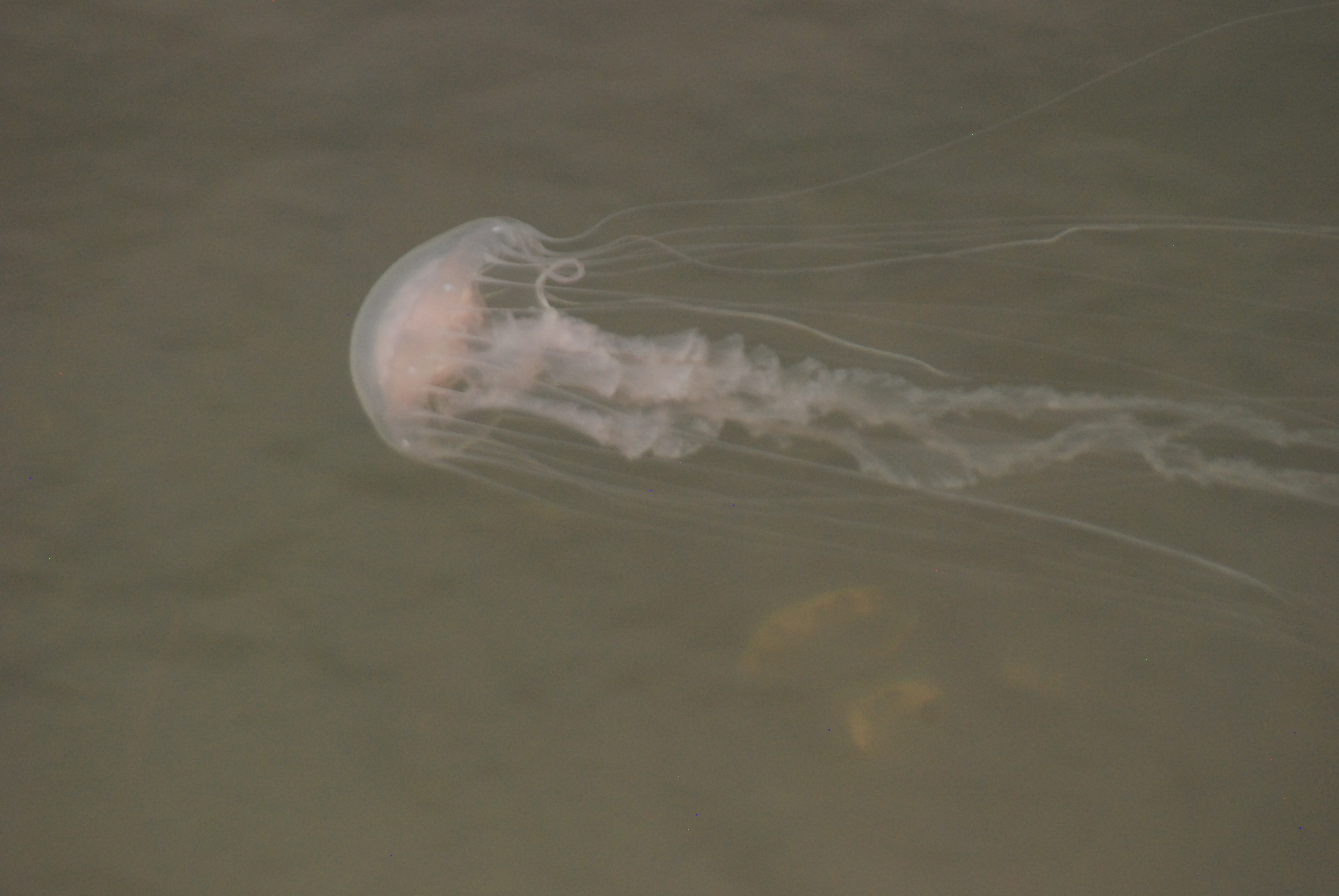 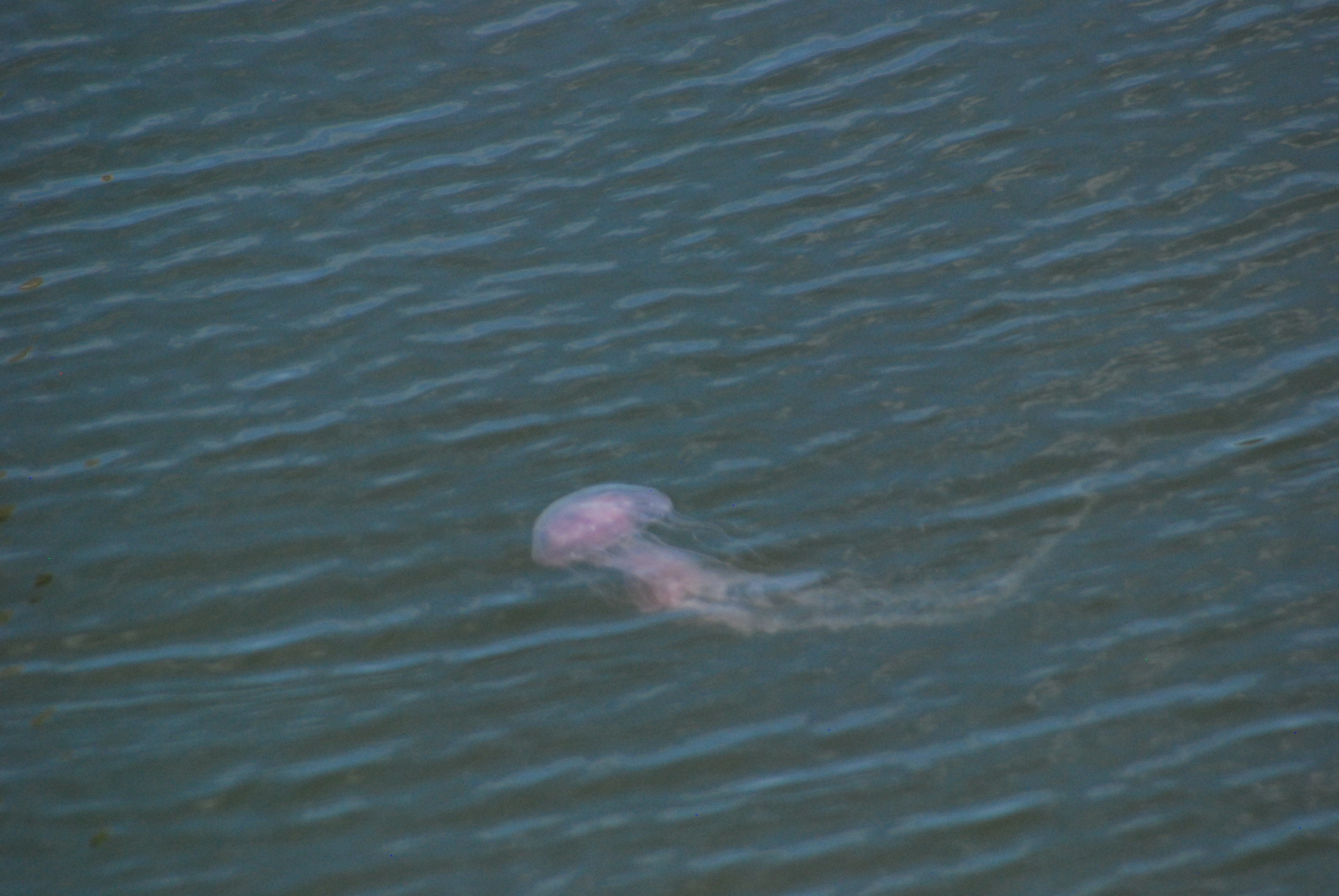 A spectral jellyfish swam past the Charles W. Morgan whaler during our visit to the ship. Photos by Katrin Talbot

Now I fancifully wonder, was the creature Ahab reincarnated, gravitating to the only vessel in the American coast that resembles The Pequod, his ship, rammed and sunk by the furious White Whale? Has Ahab Inherited “The Whiteness of the Whale” or is the jellyfish the Asian harpooner Fedallah, who is actually the one caught against Moby Dick’s white hide in a tangle of ropes?

In John Houston’s 1957 film version of Moby-Dick, Ahab has the dramatic honor of taking his last ride on Moby’s hide. But in the book, Melville dispatches the self-dramatizing captain with one existential swoop of a harpoon line, and he disappears forever into the sea, until when?

But our recalled trip is now newsworthy in that, after years of simply being a moored museum version of itself, the ship has unfurled its sails and embarked upon the Atlantic once again, in a journey along the eastern seaboard. This is the closest that contemporary culture can come to experiencing and understanding the glory, heroism and horror of mid-19th century American whaling (as documented in “Moby-Dick.”)

According to a recent NPR “Here and Now” report, after five painstaking years of restoration, the ship is ready for another voyage, “not to hunt whales, but to save them.” The ship will stop at various ports for historical presentations to explicate the story of 19th century whaling and to promote understanding of the value of preserving whales, which are still hunted by several countries. Here’s the radio feature:http://hereandnow.wbur.org/2014/06/13/whaling-ship-morgan

The complex of events will include a life-size inflated replica of a Sperm Whale, and has also generated a documentary film, premiered in May on PBS, on the history of the Charles W Morgan. Here’s a peek at a trailer for the film:http://www.mysticseaport.org/event/film-premiere-of-the-charles-w-morgan/

The Morgan had a complex and often-torturous “37 voyages around the world where this lucky ship survived freeze-ups in the Arctic, attacks by hostile natives, fire aboard ship,” and various other situations, “each of which had the potential to end the vessel’s life,” as recounted on the website of the Mystic Seaport Museum of America and the Sea. 1

The ship is still armed with the rack of harpoons for its killing work. 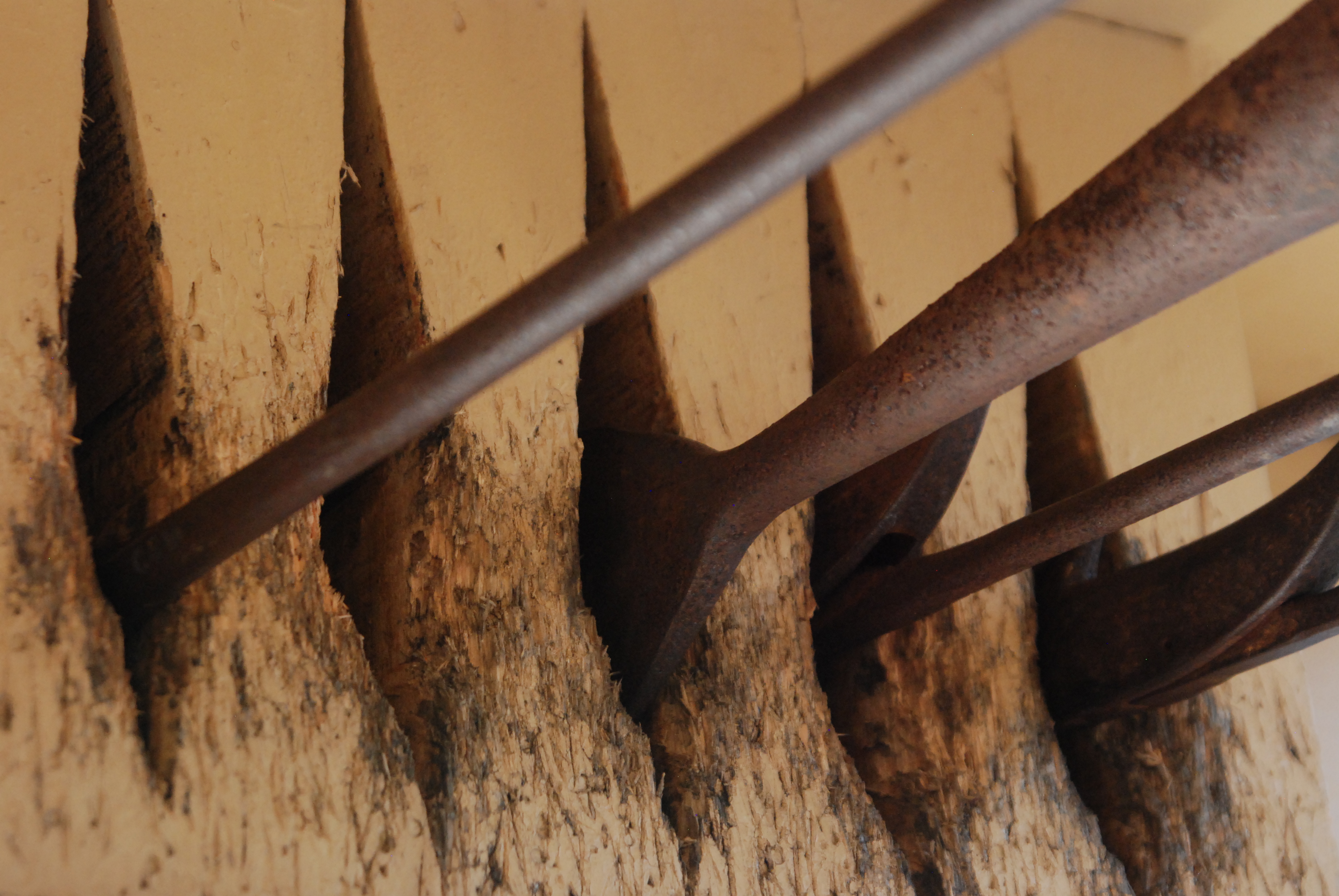 The Morgan’s rack of harpoons appeared to have been well used in the mid-1850s heyday of whaling. Photo by Katrin Talbot

and with the try-works, the two vast kettles, in which the whale blubber was melted down for oil. 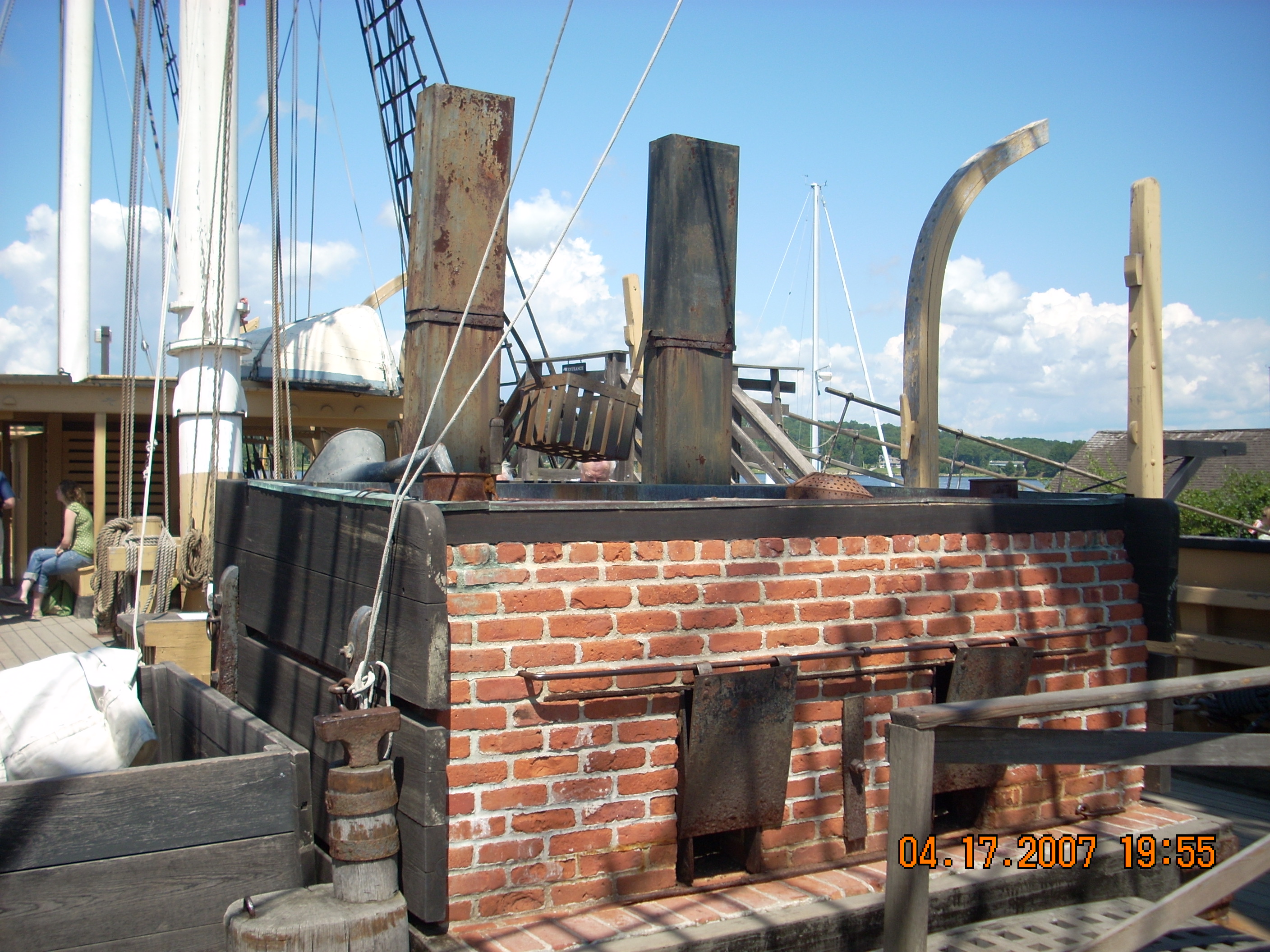 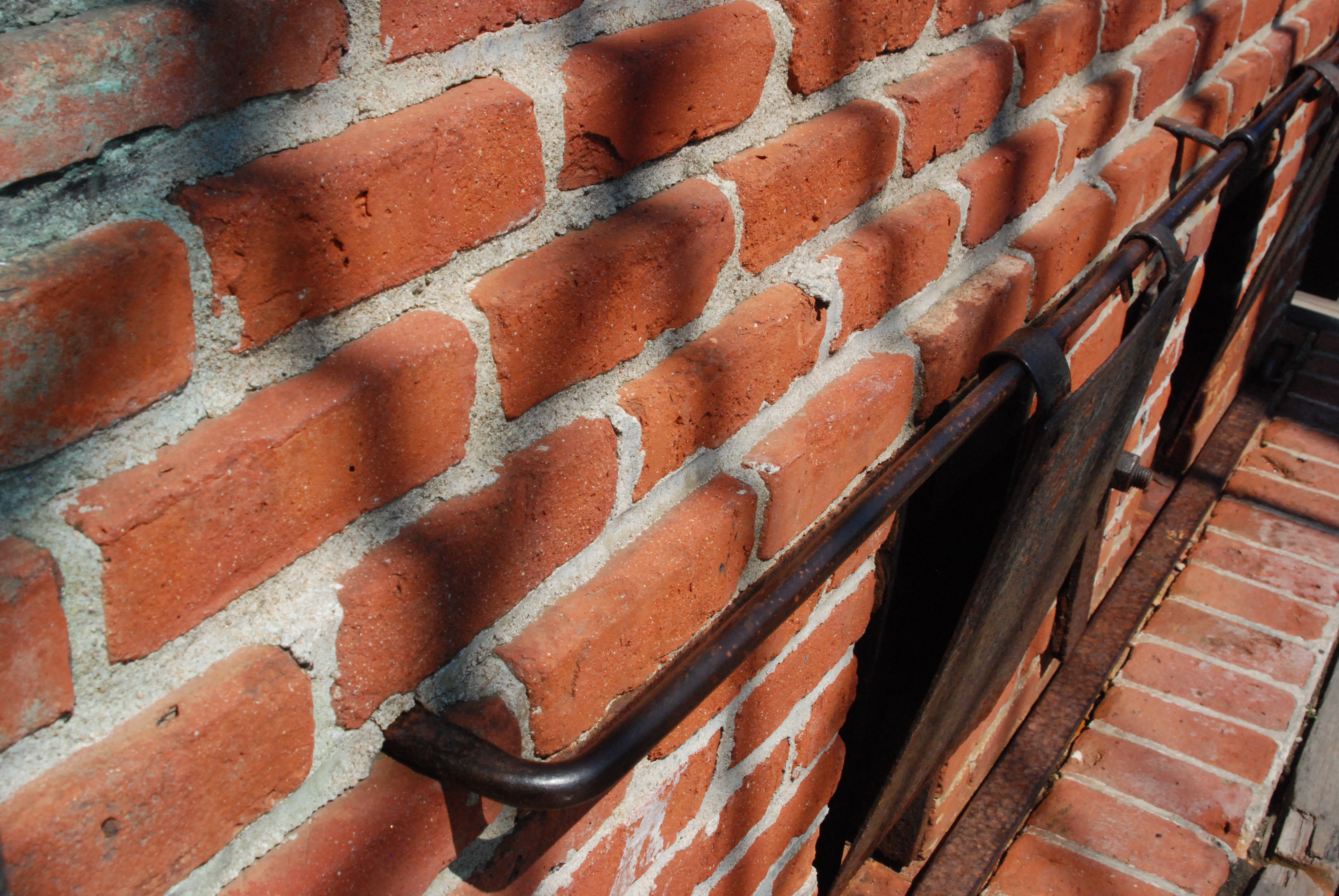 The try-works of the Charles W Morgan, the place where sailors melted giant slabs of whale blubber into oil. Note the two large wooden hangers that held the whale carcass in place while it was stripped of blubber. Top photo by Kevin Lynch, lower photo by Katrin Talbot.

In Moby-Dick, Melville vividly recounts the scene of sailors doing their dirty business with the try-works:

“With huge pronged polls they pitched hissing masses of blubber into the scalding pot, or stirred up the fires beneath, till the snaky flames darted, curling, out of the doors to catch them by the feet. The smoke rolled away in sullen heaps. To every pitch of the ship there was a pitch of the boiling oil, which seemed all eagerness to leap into their faces… Their tawny features, now all begrimed with smoke and sweat, their matted beards, and the contrasting barbaric brilliancy of their teeth, all these were strangely revealed in the capricious emblazonings of the works.

“As they narrated to each other their unholy adventures, their tales of terror told in words of mirth; as their uncivilized laughter forked upwards out of them, like the flames from the furnace; as to and fro, in their front, the harpooners wildly gesticulated with their huge pronged forks and dippers; as the wind howled on, and the sea leaped, and the ship groaned and dived, and yet steadfastly shot her red hell further and further into the blackness of the sea and the night, and scornfully clamped the white bone in her mouth, and viciously spat round her on all sides; then the rushing Pequod, freighted with savages, and laden with fire, and burning a corpse, and plunging into that blackness of darkness, seemed the material counterpart of her monomaniac commander’s soul.” 2

We can be thankful that Thomas Edison invented the electric lightbulb, which effectively brought the peak whaling era to an end. But The Morgan, the one last whaler from that century, serves as a reminder of the institutionalized rationalizations that, at constant risk to underpaid sailors, methodically killed an estimated 236,000 of the largest and most magnificent of creatures on earth.  3