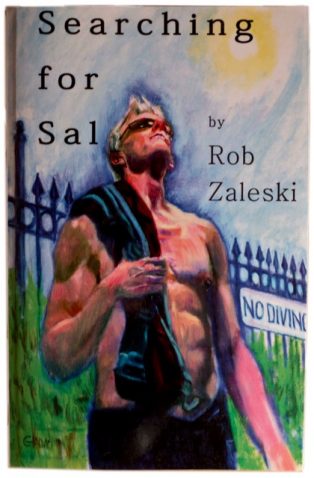 Cover art for “Searching for Sal” by Mark Giaimo

In the spirit of searching for a season — specifically the backlogged and waterlogged golf season — I suggest you fill your rainy, chilly wait with Searching for Sal by Rob Zaleski.

The novel was published in 2012, but should serve the annual hope that springs eternal for the elusive hole-in-one. And for the hole in the sky that lets us see what might be beyond this life. The novel takes a light and deft touch with expansive, weighty matters and, for that, brings to mind Julian Barnes. Though she’s hardly a light-touch writer, Barbara Ehrenreich’s new book Living with a Wild God explores similar thematic territory.

You see, in Zaleski’s tale, a hole in one does seem to open up that bigger, mysterious ontological hole in the sky. It starts with a pact, between a fiercely faith-bolstered Catholic named Sal Magestro, who often debates the existence of an afterlife with his steady-plodding, agnostic golf pal, Nate Zavoral.*

(Full disclosure: I am a longtime friend and former colleague of Zaleski, at The Capital Times in Madison, and played a golf with him, and with few other men who seem thinly disguised as characters in this book.)

Zavoral’s personality, quirks, physical build and golf game closely resemble Zaleski’s. Like  protagonist  Z, author Z’s swing is “too wristy,” a flaw “he attributed to his baseball days.” Another of Nate’s golf buddies says he’s “ the world’s most pathetic head case” regarding “the yips” while putting (Ah, if only I was nearly as good a golfer as Rob.). 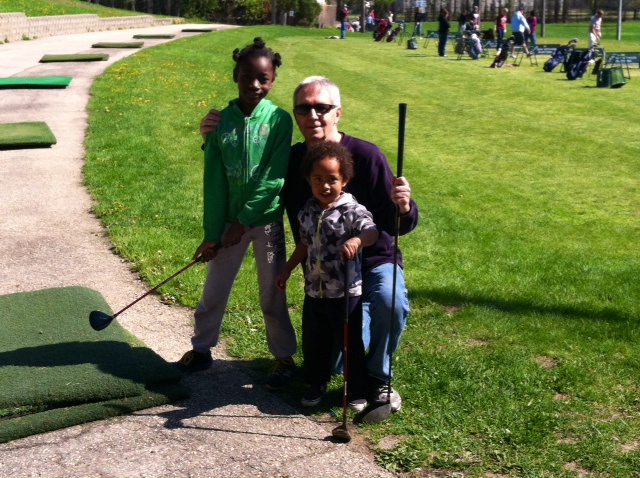 Author Rob Zaleski at Vitense driving range in Madison, WI, with his grandchildren Yani (from Sierra Leone) and Zale.

So Nate’s a good test case for the mind-bending that ensues. In their quest towards the unanswerable question, Nate and Sal dream up a sacred pact: The first of them to die will assist the other in a hole-in-one…and thus signal existence of life after death — or not.

Like many Catholic priests, middle-aged, pasta-fortified restaurateur Sal is as lusty as he is holy. So he drops dead of a coronary while fornicating with Connie Frataro, a young waitress from his Italian eatery, who resembles Marissa Tomei.

Sure enough, Nate has barely wiped the tears off his driver when he knocks a ball off a wizened oak tree, which seemingly delivers it into the par-3 hole, for his first-ever ace.

Holy pepperoni Batman! Is this really Sal, signaling from the Pebble Beach beyond? The rest of the novel becomes an allegorical search for the lost golf partner, and Zaleski plays a fun-house-mirror fantasy golf-course with it, but also sends poor Nate through the gauntlet.

The metaphysical implications — and the public debate over them and the pact’s plausibility — swiftly gain the momentum of a Tiger Woods (in his prime) tee shot. Yet the pact’s story seems as dogged and as questionable as Woods’ own future.

Nate, a modest high school English teacher, has to explain things on national TV to Jay Leno, now slack-jawed by more than bone mass. The tale swirls into virtual spoof territory by the time Nate is invited to a Peace Council gathering of international religious and spiritual leaders in Seattle, bejeweled with the likes of Archbishop Desmond Tutu and the Dalai Lama — and a video hookup with Pope John Paul II.

Zaleski is a superb, award-winning journalist who always went the extra mile for a great story or profile, but also knew where to pull up and honor truth as much as possibility. He doesn’t overplay the potential farce in his hand, and he builds suspense with deftly rendered details. Here’s Nate nervously standing at a microphone to address the august gathering of religious leaders:  “He reached inside his suit coat and retrieved a small cellophane baggie that contained one of the two copies of the pact — slightly crumpled and bent at the corners– that he and Sal had signed the summer of 1999. The Peace Council members all broke into wide smiles.”

The virtual Pope offers sage commentary on Nate’s prejudices against the Catholic Church but also treads lightly regarding grand spiritual claims for the golfer’s experience. Best of all, the Pontiff notes that, though he’d done “some kayaking and skiing” in Poland when he was younger, he understands that golf “is a very humbling game.”

That actually sounds like something the current Pope Francis would say. But that kernel of truth may underlie some of the more high-flown issues of this story.

The empirical mystery appears solved with a twist of an ending, which contains genuine emotional  power, and political resonance, especially for the situation of the young character introduced in the plot-turn. But are the bigger questions really answered?

Throughout this quickly unfolding odyssey, Nate’s existential queasiness is steadied by his wife  Brigitte — as rock-solid as the author’s real-life counterpart, Cindy — and by Rev. Mitch Crandall, who becomes his spiritual and political advisor, and is clearly based on the remarkable Rev. David Couper, a liberal former Madison police chief-turned-pastor. 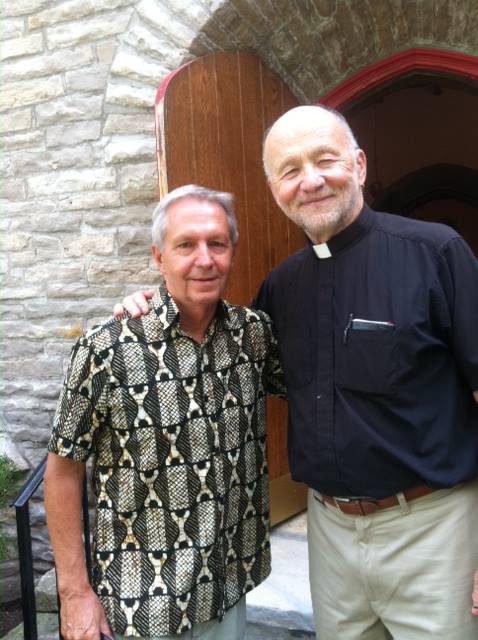 Author Rob Zaleski with Episcopalian Minister David Couper, a former Madison police chief who appears to be the model for the Rev. Mitch Crandall in “Searching for Sal.” Photo by Cynthia Zaleski

I came away from the book reflecting that once you think your tee shot has taken angelic wigs to the perfectly manicured promised land, something happens to shatter your sense of orderly and rational  existence, and situational odds.

The end may be no more conclusive than the image of Nate gazing at the sun-drenched sky, which adorns the book cover.

And yet, he might as well be staring down into that little four-and-a-quarter-inch hole of darkness on the green, which New York Times contributing writer Charles McGrath contemplated in an op-ed column Sunday on the golf hole and “the future of golf.” 1

There’s certainly a mystique to Nate’s shadowy little hole, and perhaps to the one all golfers aim for.

McGrath writes: “The origin of the hole is a burrow, presumably, discovered by some Scottish shepherd knocking pebbles with his crook, and even today the golf hole retains some of that burrow-like quality: It’s a refuge, a temporary lair into which your ball sinks out of sight and where you have to reach down and extracted it, as if it were hiding”… “like a mouse.”

Golfing metaphors can be as big as the ocean, and the life beyond, or as seemingly modest as something hiding in that small black hole, something with a life of its own. What we find might tell us a little bit about who we are for what we choose to chase in this life, and about what we might do once we discover what dwells in that hole, in the ground, and in the sky.

Or try Searching for Sal. It carries your imaginary tee shot a long ways, into the sky and the shadows.

The book is available on Amazon.com

* I describe myself as an agnostic, but I’m an occasional attender of Unitarian meetings, and quite open to human experience. I have had two strange occurrences in the last year that might, at some point, be explained empirically. Yet the notion that these events were “signs from a departed loved one” fits perfectly, just as each ghost might have it. Perhaps I will write about this some day.