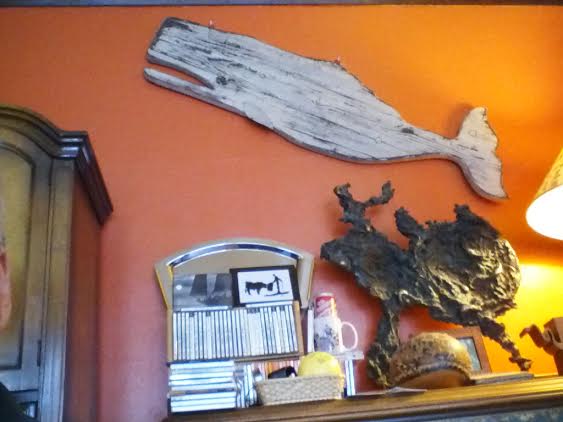 The above line is not in Melville’s great novel, but part of the inevitable liberties with the text taken by the screenplay of Huston and science fiction writer Ray Bradbury. But I defer to popular culture this time.

Finally, Moby Dick rises on my dining room wall. I’d been saving my nickels to purchase the wood wall sculpture of the great literary creature at a remarkable shop called Cottage House Primitives, 120 S. Main St., in Lodi, Wisconsin. http://www.cottagehouseprimitives.com/. Created on the East Coast by Peter DiScalia, my new Moby Dick is four-feet-three inches long, and readers of this blog will know that Herman Melville’s legendary white whale carries great significance for me — as it does for countless other fans of The Great American Novel.

Part of the book’s legacy is how much it has impacted modern and popular culture and now, aside from several pastel paintings with Moby Dick/Melville themes that I have done myself, I own one such cultural artifact. 1 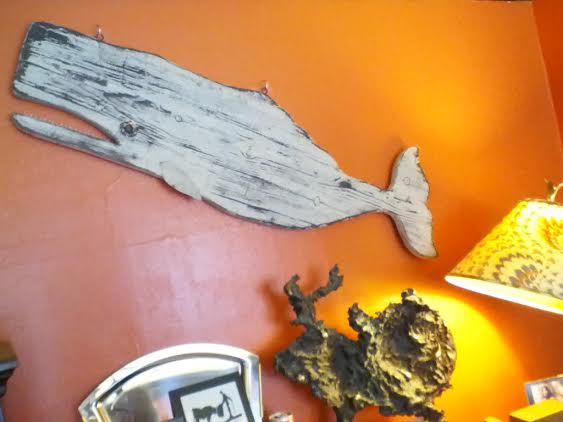 So this is one of my more personal postings, but as a professional journalist I hope you indulge me because many bloggers are far more personal than me on a very regular basis. I offer this little photo essay of the whale in his new setting, mounted in breaching posture, on my dining room wall — in increasing closeup. 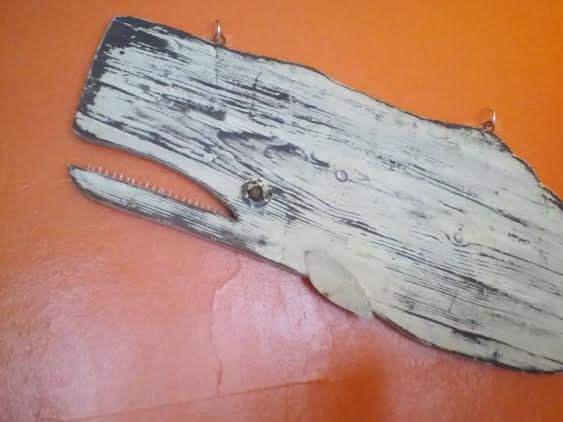 In the detail above, the Sperm whale teeth are nails inserted in a way I have yet to ascertain (not pounded through the bottom of the whale jaw). The eye is a door knob collar, the fin is a cut piece of soft metal, perhaps tin or aluminum. DiScalia apparently cut the sculpture from a slab of barn wood, and then whitewashed it. The way the whitewash has worn away seems like natural aging and exposure, because the two eye loops on which I attached the wall hooks are heavily rusted.

One can imagine the whale swaying and creaking in the fierce Atlantic wind over an establishment like The Spouter-Inn of New Bedford, which Ishmael encounters in the beginning of his great white whale adventure. This weathered effect also persuasively conveys the craggy age of the legendary whale that refuses to die. Only sailors attempting to kill him die, like crazy Ahab and the courageous-if-foolhardy crew of the Pequod…”all save one” — Ishmael, who lives to tell the story. Remember, the crew was coerced into the insane and fatal chase by a brilliant demagogue.

This piece of art is an excellent example of the type of merchandise offered by Cottage House Primitives, the store in Lodi situated a few steps away from fast-flowing Spring Creek, which runs right under Main Street. Owner Carol Naab specializes in early American and 19th-century originals or reproductions in various arts, crafts and household goods, and sells a number of evocative items created by Moby-maker DiScalia, she says. It is a historically transporting experience to walk into the shop and browse around. (Full disclosure: Naab is a sister-in-law, by way of my first wife, the late Kathleen Naab Lynch. Carol also happens to have been born on the exact same day I was.) 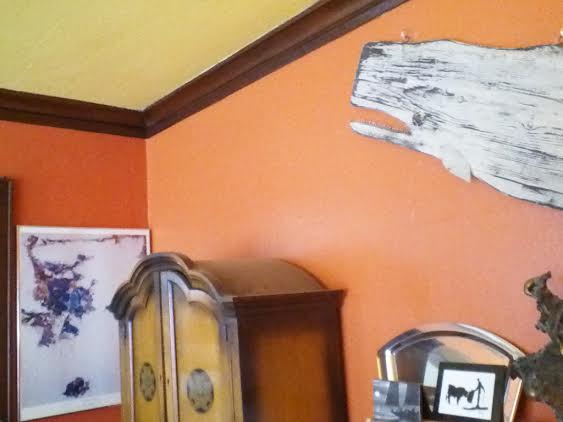 Upon mounting Moby in my dining room, I thought I would also share a few photos of his new environment, which includes several other art pieces. On the wall adjacent to Moby Dick is a pure kindred to him (see photo above). It is a reproduction of Sam Francis’s wondrous 1957 abstract painting “The Whiteness of the Whale” which resides in the collection of the Albright Knox Art Gallery in Buffalo, New York. It is the first work of art (reproduction of) that I ever had framed, many years ago.

The painting’s title borrows directly from the great, same-titled philosophical chapter in Moby-Dick, which reverses semantic convention by contemplating the perceived evil in the symbolic presence of white, as opposed to black.

In the nearby living room hangs “Ishmael Intuits the End from the Crows Nest” (below), my own 2009 pastel painting of a scene in Moby-Dick. The connections to the wall sculpture should be self-evident. But aside from Ishmael’s vertigo perspective atop the ship, the painting also illustrates Melville’s remarkable description in Chapter 133 “The Chase – First Day” of  “one of the cloud of soft-toed fowls hovering”  which is “silently perched and rocking on this pole (the harpoon in the whale’s back), the long tail feathers streaming like pennons.” 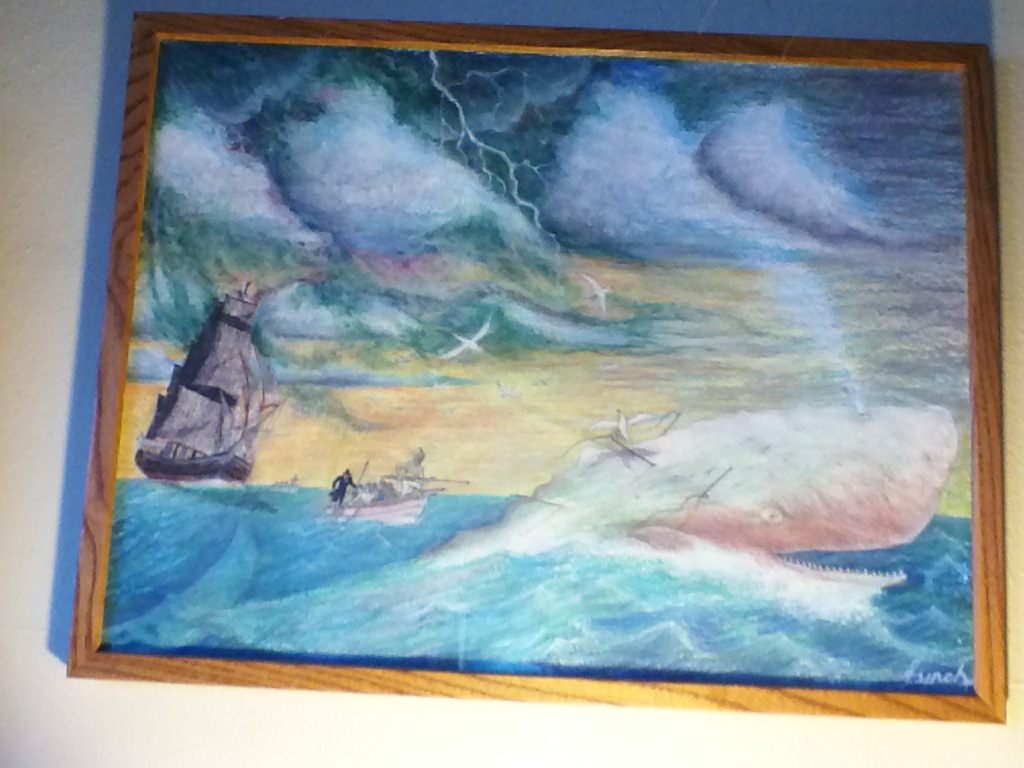 Finally, I return to the closest companion to the wooden Moby wall sculpture, right below him — one of my personal favorites among the sculptures I have done. It is an abstract bronze casting titled “Free Space Relief.” Note also to the left, a black-and-white reproduction on glass of a toreador with bull, by Picasso. 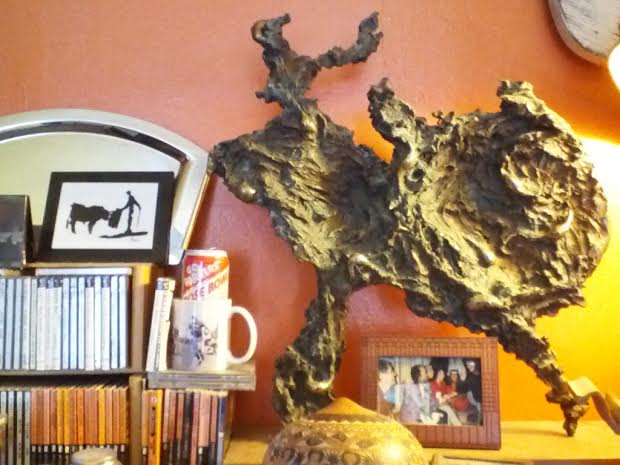 In this close-up of the bronze sculpture, I hope you see the expressive energy, form and texture I was exploring in the work. I thought the piece was evocative enough without giving it a more poetical or imagistic title.

To satisfy anyone curious (or to perhaps overshare), to the right of the CDs is a mug adorned with a reproduction of a photograph of my father returning a kickoff in 1947 for Washington High School in Two Rivers, Wisconsin. This is a memorable newspaper photo because it was a team that went undefeated that year, including a 41-0 rout of Pius XI High School, a much bigger school in Milwaukee.*

One more item: The framed photograph directly underneath the bronze sculpture is of a reception for the great jazz pianist Cecil Taylor in the mid ’80s (See detail below). Taylor is in the middle in the purple jacket, shaking hands with a well wisher, Karen Keene, a flutist who married Victor De Lorenzo, drummer for The Violent Femmes. To the left of Taylor is my dear friend Jim Glynn, a well-known Milwaukee musician, disc jockey (for WMSE), and culture vulture. And on Taylor’s other shoulder is his old friend, as well is mine, Ken Miller, a dancer and arts programmer. 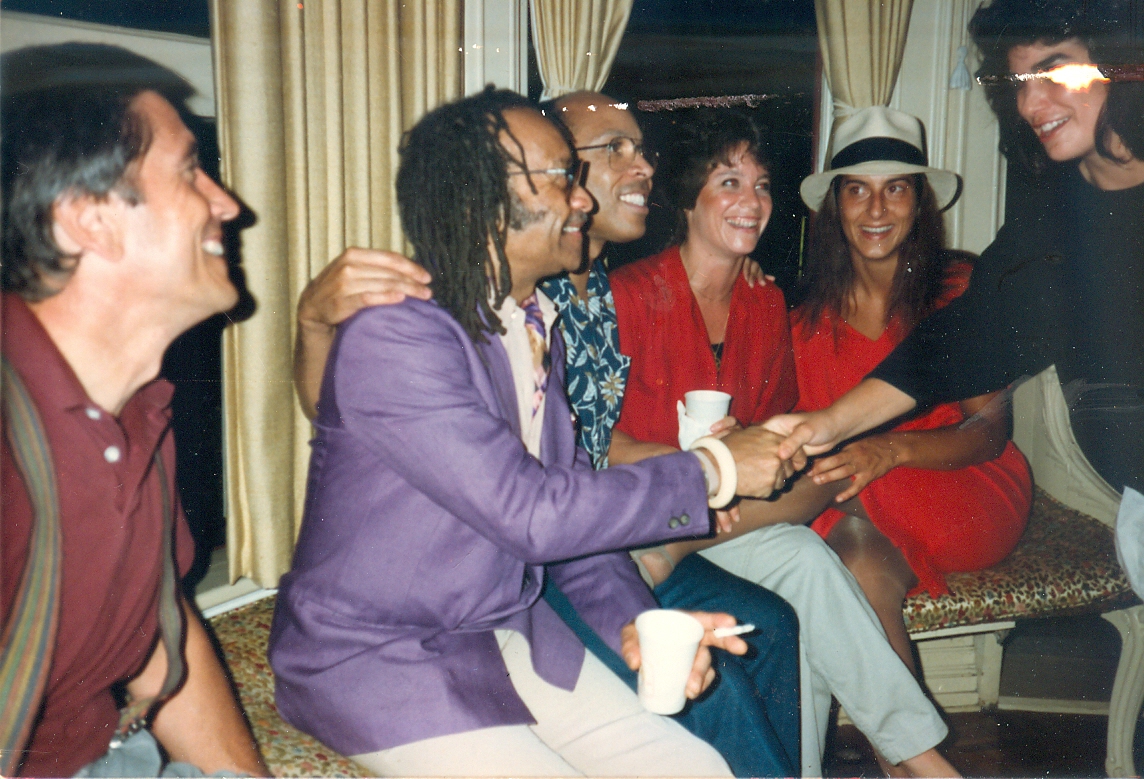 Cecil Taylor reception at The Wisconsin Conservatory of Music, mid-80s. Sorry about the damaged photo.

Sadly, both Glynn and Miller are now dead.   I don’t know what it means that this blog posting has summoned the memory of three contemporaries of mine (including my former spouse) who have died. They were three remarkable people, each in their own way. But for me, the photograph, and now my new Moby Dick, serve somewhat as precious evocations to their memories. I suppose, this cultural act works not too unlike how Ishmael’s grand story preserves his memory of his best friend Queequeg and other memorable characters among the Pequod crew, such as Pip, Starbuck, Stubb, Tashtego, Daggoo, Fedallah, and of course, Ahab. In the end, only the white whale glides on, in “the great shroud of the sea” that “rolled as it rolled five thousand years ago.” 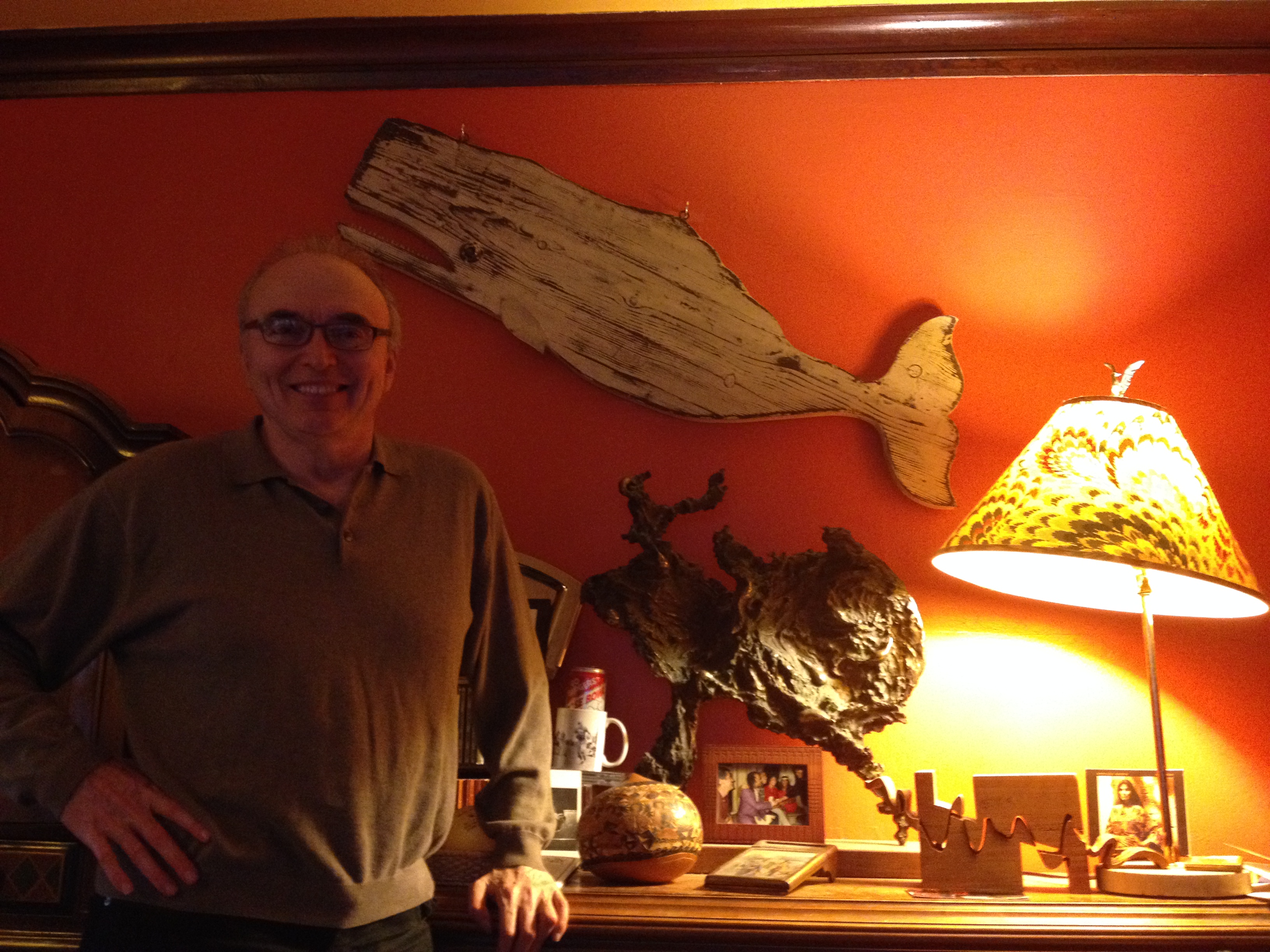 Kevernacular (Kevin Lynch) with his new Moby Dick wall sculpture. The small wooden jig-saw sculpture beneath the lamp is by Kevin. Photo by Ann K. Peterson.

* the mug with my father’s football photo was the gift of a thoughtful friend, Mary Ann Nicoud, on the occasion of Norm Lynch’s death on November 22, 2009.

One thought on “My Moby Dick sculpture from Cottage House Primitives”