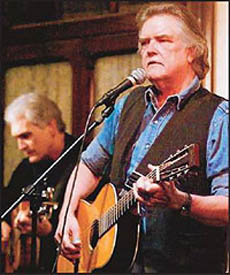 A prime motivation for my nearly 800-mile drive from Milwaukee to the Blue Plum Festival in eastern Tennessee was to see the now-venerable Texas singer-songwriter Guy Clark. It was a deeply gratifying experience. Though only 70, Clark is currently walking with a cane (perhaps still suffering from effects of a broken leg in 2008) but when he settled in and warmed up with fellow guitarist and songwriter Verlon Thompson, he quickly offered several fine brand-new songs, proving his creative powers have hardly diminished. “The High Price of Inspiration” addressed how creativity is almost always inextricably entwined with life when he demurrs, “Inspiration without strings, I’d like that once.” Another new one “Coyote” (Spanish for trickster or, as Clark said, “coward”), pointedly conveys the wrenching story of mercenary smugglers who exploit the desperate dreams of illegal aliens along the Mexican-American border: “You took all my money and left me to die in South Texas sun.”

Here you gain a sense of Clark’s distinctive artistry as his dusty, understated singing style assured that the song’s pathos would never be oversold with sentimentality. As always with Clark, the feeling are vivid in his voice but tempered by the sense one is overhearing a man almost singing to himself. He often sounds as if he’s just awoken from a dolorous dream. So hearing him is an utterly human experience.

Lost love, a classic theme of country music, is perfectly recast in his classic “Dublin Blues” — amid a beer-soaked rhythmic sway, the protagonist rues the fading object of his love, across the Atlantic Ocean and half of America:

I wish I was in Austin/ In the Chili Parlor Bar/Drinkin’ Mad Dog Margaritas/
And not carin’ where you are.

The wishful denial expresses the emotional truth, the art of slight indirection.

Although he is also a master craftsman of guitar-making, Clark understands the proper place the material objects have in life. In “Stuff that Works,” he sings about the “kind of stuff you don’t hang on the wall/ the kind of stuff you reach for when you fall.”

Just for the sake of argument, I’d also nominate for such a monument Clark’s old compadre, the late Townes Van Zandt (together probably the real-life Pancho and Lefty), Bob Dylan, Willie Nelson, Neil Young and maybe Lucinda Williams, assuming room for five faces. Coincidentally the visages of all these people show the weight of their gifts and burdens, often interchangeable in nature. Calling all cultural chiselers.

Clark’s small wave to the crowd at the set’s end conveyed something, perhaps a slightly amazed humility. He has a reputation as an ornery cuss but you get the feeling that — aside from his loving competition with Van Zandt — he never wanted a whole lot more than a workbench at which he could fashion his guitars and dream up stories of desperados and desolatos to sing. Today Clark’s esteem among his contemporaries is underscored by a recent 2-CD recording of his songs by the likes of Willie Nelson, Emmylou Harris, John Prine, Roseanne Cash and others. “Guy’s songs are literature,” said Lyle Lovett, one of the artists heard on the tribute. “His ability to translate the emotional into the written word is extraordinary.”

Despite all this, I think Darrell Scott deserved the Blue Plum’s closing headliner spot, because he’s a performer in his absolute prime and a songwriter who could arguably crack into the company above. And his style connects more directly with a large crowd.

His voice can take a lyric line and hoist it from an inner feeling to an outer wail with chilling suddenness. And yet he doesn’t lose the sound of intimate probing that gives the feeling emotional honesty. His baritone-tenor range recalls Paul Simon without the tendency to preciousness.

That’s a special singing skill and his lyrics are an easy match in quality. For example, the jazzy-gospel “River Take Me” is about an out-of-work man who wants only “to live within the means of his own two hands.” When Scott sang fervently, “River take me, far from troubled times,” you sensed human desperation in the reach for a mythological metaphor: The troubled imagination must do the work that those under-used hands cannot, while understanding the risk of the dream. “The river can drown you or wash you clean.”

Yet Scott looks beyond one man’s personal situation. One of his most covered songs* is “You’ll Never Leave Harlan Alive,” a majestically mournful melody which commemorates the hard coal miner’s life in Harlan County, Kentucky, where “you spend your life digging coal from the bottom of your grave.” It’s the story of his own grandfather — and of many men whose lives are too proverbially close to “nasty, brutish and short.”

Scott performed with the band comprises of all his blood brothers who he said had performed together as a whole ensemble since they were teenagers. You could sense the deep history circulating among these men complex yet gone with understanding and affection.

* Kathy Mattea’s rendition of “Harlan County” is not to be missed on her album Coal.