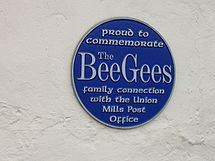 Pardon if it feels unseemly to present a slightly dissenting viewpoint when a performer dies. We certainly lost a big talent when Robin Gibb passed recently at 62, and I’m glad that, according to TIME magazine he apparently “never developed the preening persona often associated with pop stardom.”

I enjoyed the Bee Gees’ gleaming harmonies whenever I heard it, for their pure musicality and soulfulness, even though most their music was just too slick and audience-pandering for my tastes.

My question is: If Robin Gibb never developed that “preening persona” he would be the Gibb brother I would’ve asked; Whatever happened to your working-class roots in your music?

The TIME obit (June 4 edition) seems to celebrate how they won their nine Grammys and sold 200 million albums because of their “sweat and toil.”

“We had come from a very working class background, and we worked damn hard,” Gibb told a biographer.

That’s great, it really is, don’t get me wrong. I love that.

I became enchanted by the Bee Gees when they released their second single, “New York Mining Disaster 1941” in 1967. I bought the 45 RPM single immediately. This was wonderfully creative music with a historical and social conscience. It was poignant, powerful, vivid musical storytelling implicitly about the working class person’s resilient spirit and explicitly-yet-gracefully about the consequences of the mercenary inhumanities of the Industrial Revolution.

What happened to that social conscience?

It went disco. And made millions. Well, bully for The Bee Gees. Oh, I also admired the early song “Holiday,” an understated love ode and the impressive album Odessa, a blend of progressive rock and country touches. But these few artistic high points in a long career suggested they could have been something like a British version of The Band, another group with utterly distinctive three-part vocal harmony, who also work damn hard to as a rockabilly band for years before Bob Dylan realized their talent, and the rest is history. Or like Los Lobos, by defining and expanding on their roots musiciality in their own ethno-cultural terms.

Does money buy happiness? I doubt it, though one might wonder if The Band’s Richard Manuel had become as rich as a Bee Gee, would he have committed suicide.

But the lure of filthy lure is so powerful (and yes, part of the American Dream that modern young Brits fed off of) and for all I know the Gibbs were following their heart (at least in their minds.) And they figured they could’ve been as big as the working-class Beatles, and they almost were. But they could’ve given a lot more back to the working class culture they came from, rather than the top-down reception of admiration from the people in Chorlton-cum-Hardy, Manchester who remembered the boys back when, even though the locals’ surely enjoyed understandable pride in the Gibbs. The plaque (above, courtest Wikipedia) posted at Maitland Terrace/Strang Road intersection in Union Mills, Isle of Man, attest’s to the region’s pride.

Nevertheless, it seems the boys didn’t have a whole lot to say beyond boilerplate romanticism and disco struts after New York Mining Disaster 1841, despite their remarkable musical gifts. They could have alternated between disco material and more serious projects to help sustain an artistic vision, like many musical and filmmaking professionals do.

Because you have to figure that, a lot of those proud Manchester locals understand the depths of human loss in a working-class tragedy. To me that historic legacy went forgotten after 1967. That’s a small disaster of unrealized cultural potential.

It’s interesting that Gibb turned to classical composition recently, and sad that he was too sick to perform the April 10 premiere of his Requiem for The Titanic.

That work may yet redeem Robin Gibb’s final artistic legacy.