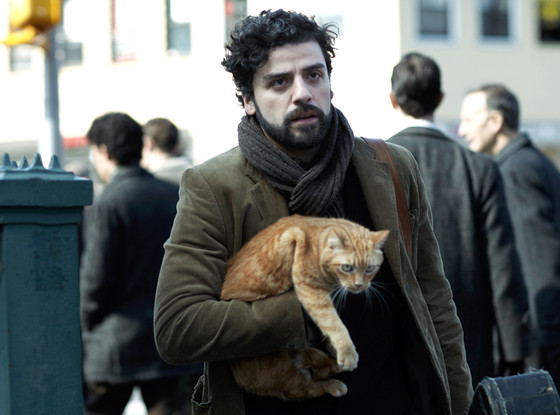 Oscar Isaac as struggling folk singer Llewyn Davis is a flawed and sometimes irritating character with redeeming qualities, like his befriending of a runaway cat. Courtesy eonline.com

Joel and Ethan Coen do a fine job of making us feel the experience of a fictional Greenwich Village folk singer in their new film Inside Llewyn Davis. We feel sorry for this poor schlub who can barely score a bed to sleep in, much as much less a gig for a meal or two. This is the way it was for Dave Van Ronk and probably many other striving troubadours who believed in the need to get out there and sing something with their guitar in front of a bunch of people who seemed to care about something happening in the smoky air, and in the music.

That something was happening slowly, but right then it was more like people priming things, tending to the fire until a great talent came along to crash in, to stir the fire into something extraordinary. So the Coens opt for a curious indirection in this movie. The pathos laid on the doorstep of this folksinger is a spot-on critique of the problems of the scene, but also does a disservice to real-life talent like Dave Van Ronk. I never saw him live, but just listen to his recordings. He was never ever a pouty, pity-pot musical moaner like Llewyn Davis and the other self-absorbed young people who provide fodder for legitimate criticism of the era’s white folkies.

The brother-directors also make clear another variation of the problem: all the crew-cut, knit-sweater wearing collegian folk-star wanna-bes who have no real sense of tradition or suffering, or of the true American story that would generate over decades what we know as roots music today.

So at one point, Llewyn, played by Oscar Isaac, sneers at a wholesome foursome cooing quartile harmony: “Nice sweaters.”

He nails ‘em. And yet, if Joe Blow sees this movie with no awareness of what’s happening in roots music today he might shrug it off and go back to listening to his Top 40, or whatever he listens to, none the wiser. I’m somewhat less impressed than others with the music here, despite the redoubtable presence of music producer T-Bone Burnett’s guiding hand. Perhaps he and the Coens felt it was impossible to directly evoke Davis’ model, Dave Van Ronk, who was priming the times with a deeply knowing and passionate exposition of the  roots music tradition, less understood then as it is today thanks to passing time, increased scrutiny and a remarkable cultural flourishing.

But listen, for example, to the real-life folk-blues-jazz singer doing the song “River Come Down” on Dave Van Ronk The Folkway Years 1959-61.

He heartily evokes a river as a kind of siren spirit, calling to him when it seems to be his home across the river calling to him, and a woman named Anna. Or is Anna the river, the dangerous siren temptress? We all know the sorts of temptations that led archetypal and ordinary Americans, as well as their institutions,  astray.

Van Ronk’s rendering of the song is a powerful bit of national myth making, and yet it’s as bare bones in its storytelling tone as taking a “stick of bamboo” and throwing it in the water to see how it flows.

Van Ronk had an irrepressible spirit and a bearish voice, miles beyond the simpering, if-at-times-soulful  musings of our fictional Mr. Davis, who is supposedly based on The Mayor of MacDougal Street, Van Ronk’s autobiography of his years of struggling to make it as a folksinger in early 60s Greenwich village.

There’s plenty of wonderful atmosphere in the movie, which lends a romantic patina to the story. And yet the directors succeed in not over-romanticizing either, despite their questionable choice of a lead actor-singer, and character type.

I mean, this dude is also sort of a nasty personality, resentful of others’ success and often unappreciative of generosity. Were folk singers back then like this? Doubtlessly some of them were, as flawed human beings like most all of us. So the movie renders a delicate balance to convey sympathy and antipathy for this character.

And there are enough vintage, cock-eyed Coen Brothers sub-plots and detail twists — the forlorn cat Llewyn adopts, a pregnant and bitchy ex-girlfriend, the drug-addict jazz snob played by the great John Goodman… 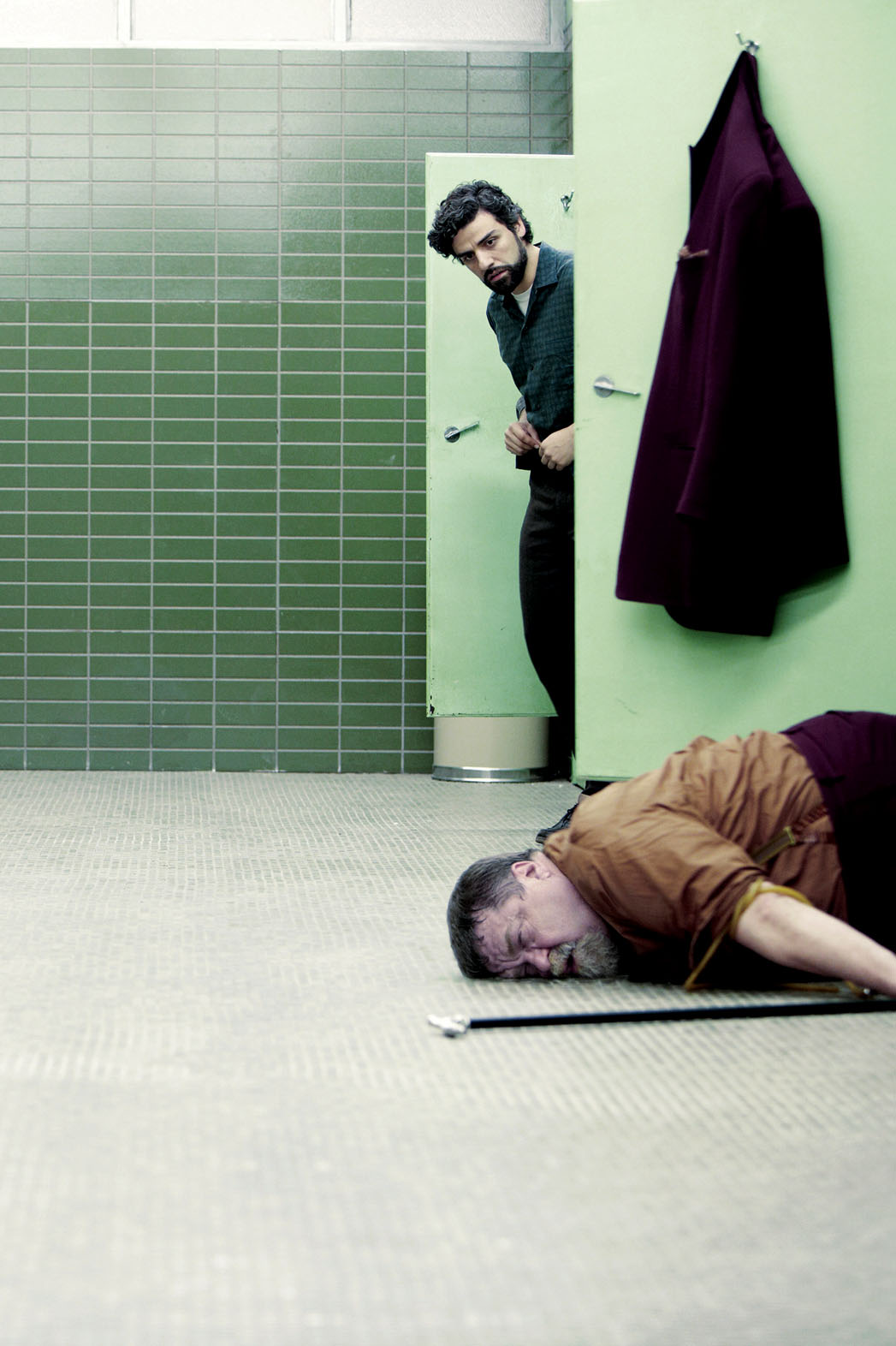 John Goodman (foreground), as a drug addicted jazz musician is one of the trademark Coen Brothers characters that add color and grit to “Inside Llewyn Davis.”

Lord knows the Coen Brothers have great affection for these American folk vernaculars, as they demonstrated in their marvelous bluegrass-drenched movie O Brother, Where Art Thou? So, in a sense, this whole story hinges on a subtle but almost miraculously striking and vivid moment of magic near the end of the movie. Llewyn Davis has had another shot at the nightclub mike and seems to be wandering off to the next thing that happens in his life. The next act gets up naturally to sing some songs.

We just see this figure’s shadowy silhouette but the high, reedy voice is unmistakable. Time seems to stand still, and start up completely new. The hairs on the back of your neck rise: You realize this is the moment that Bob Dylan arrives in Greenwich Village to become the musical messiah who would lead us to the great counter-cultural odyssey and to a certain enlightenment, and surely to the vast realm of teeming culture we know as roots music today.

I think the movie works finally because of this deft H-hour gambit, less of a Hail Mary pass than something that just happens like combustible energy, like maybe an improbable last-minute interception, to push the sports metaphor. Dylan disrupts all the era’s water-treading self-consciousness and silliness.

Most of us know the strange, incantatory effect of early Bob Dylan. The voice wasn’t impressive in purely musical terms, but it was honest, wheedling and bracing. He’s rummaging through the some of the old blues repertoire that Van Ronk was mining but what sets Dylan apart are his original lyrics, unfurling from a faintly arrogant sense of purpose and truth in his young, brackish voice. Nobody completely understands the bramble bush of lyrics, perhaps not even Dylan himself.

But the new songs are transformative because they capture the spirit of the time, at first by becoming very political and then pulling back, knowing how much the personal is also political. Dylan was an authentic dissenter, a self-styled pseudo-cynic and a hopeless romantic all in one. Perhaps that was what the better angels of the national spirit understood as the authentic American, in that peculiar Cold War era that prompted Dylan’s Talkin’ World War III Blues. The national spirit was also curdled with ugly, festering racism, which was about to bust wide open as a raging wound of American conscience, with the help of Dylan, Martin Luther King Jr., Malcolm X and many, many more. What a time. What a country. 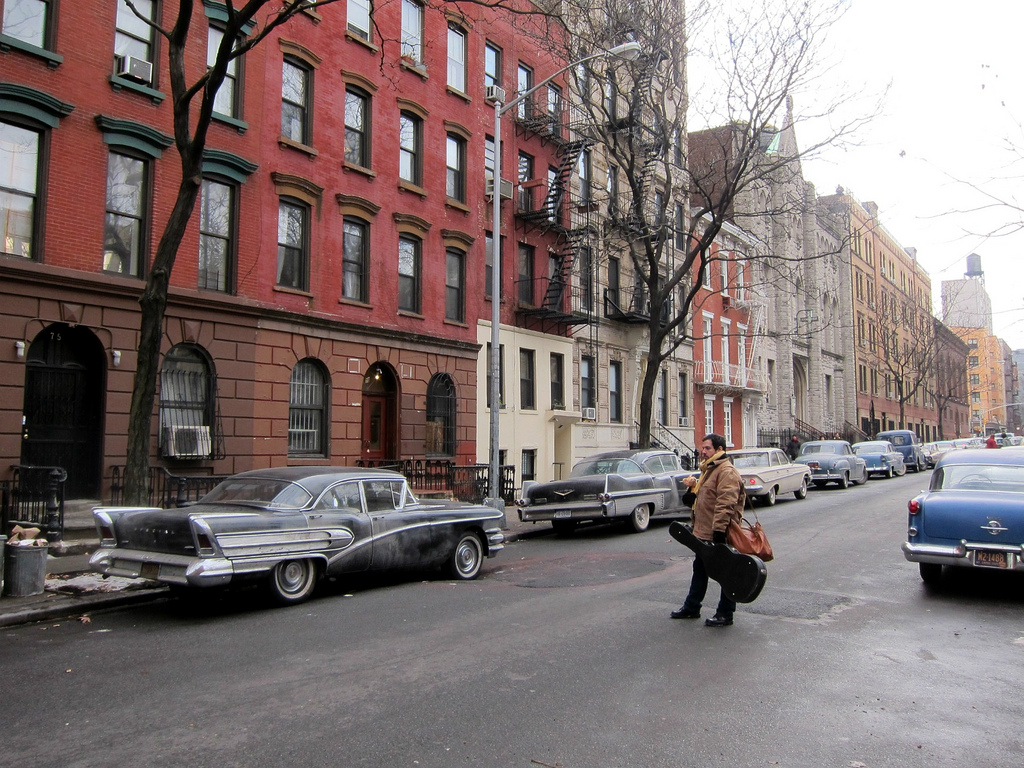 As the camera pans straight onto Llewyn Davis walking down this Greenwich street, a flash of recognition may arise for many viewers…Courtesy the filmstage.com

That story is pretty well known, so the way that the Coen Brothers underplay Dylan by not even identifying him seems perfectly parsed and placed. So if it takes you back to Dave Van Ronk records and to your early Dylan records, the movie has succeeded. As soon as my Van Ronk side finishes I’m probably headed for The Freewheelin’ Bob Dylan. One of the other deftly inserted scenes is of Llewyn Davis toting his guitar down the middle of a Greenwich Village street. You recognize the camera angle and setting: It is the same chilly street that Dylan and his girlfriend Suze Rotolo promenaded down through the winter slush, arm in arm, when somebody captured them in a photo that would become the cover of The Freewheelin’ Bob Dylan. 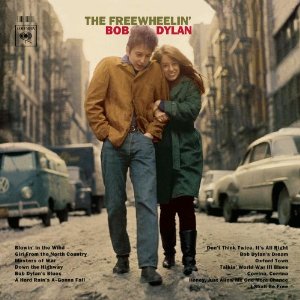 …It’s the same street depicted on the cover of “The Freewheelin’ Bob Dylan.” Courtesy of hollywoodreporter.com

Or maybe I’ll pull out Bringing It All Back Home. I hear an impatiently insistent, driving guitar drone:

...While them that defend what they cannot see/with the killers pride, security/close their minds most bitterly/for them that think death’s honesty/Won’t fall upon them naturally/life sometimes must get lonely…

And if my thought-dreams could be seen/they’d probably put my head in a guillotine/but it’s all right, Ma, it’s life, and life only!

The times they were a changin’. And this movie gets the particular time freeze-frame right, just about. But it’s all right ma, it’s only the movies. There’s always the music.